Behind the Shot – Westminster

A few years ago, as I started this blog, I wrote some articles where I described what thoughts went into some of my 2010 Cornwall photos. With this article I want to revive this series and give a little behind the scenes information about one of my recent photos from London.

Last weekend I spent three wonderful days in England’s capital. I had great weather for photography, a mix of sunshine and clouds with an occasional rain shower in between. Because the time was much to short to photograph all the beautiful places in London I had to focus my efforts on a few areas.

I went with some of the cities most famous icons: Tower Bridge, St. Paul’s Cathedral, Trafalgar Square and Westminster. At Westminster I was particularly lucky. I arrived half an hour before sunset with a dark bank of clouds rolling in from the east. As the sun peaked through from under the clouds and rain started in the distance it was an awesome spectacle. 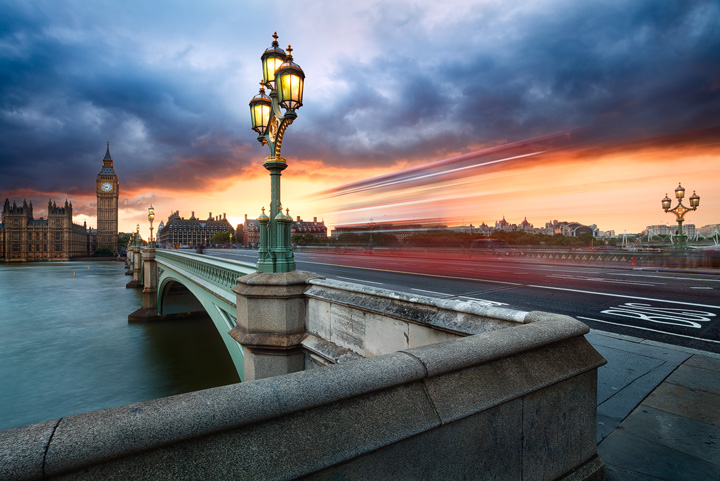 With such intense light you never know how long it will last. So I had to find a composition to suite the scene very fast. It was important for me to have some foreground element leading into the picture, I wanted one of those red buses as a blur in the photo and very important: the Big Ben.

With my Camera high on a tripod and a Lee 0.6 soft GND filter in front of my wide angle lens I quickly composed the photo you see above using live view. It’s an invaluable tool, if you want to get all the details right. By zooming in ten times I had a close look at the edges of the frame to make sure that no important elements were cut off.

Then I started to take a series of photos. First a photo with focus on the foreground, which I used for focus stacking. For the following photos I set the focus to the middle ground and experimented with different exposure times as the buses rolled in from the right. There was a bus stop only 100 meters away and it was easy to time the shots using a remote release. 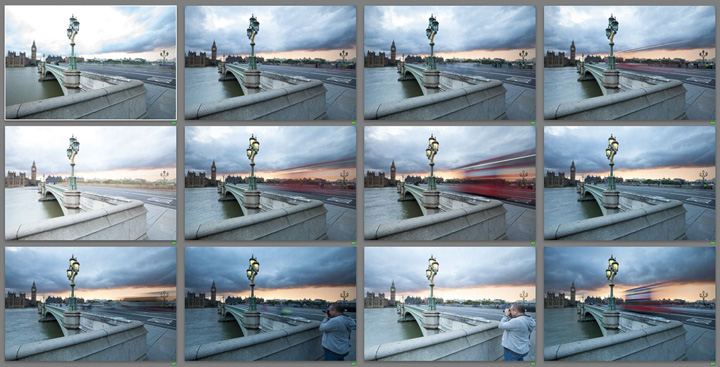 Above you see twelve of the photos I took that evening and that were used in the post processing of this photo. It’s a bit like a puzzle. I have all the elements I need but distributed over multiple exposures. So some blending was needed in Photoshop to bring it all together. The important thing was that while taking the photos and seeing the results on the camera screen I already envisioned how I would fit the pieces together.

I also had to closely remember the atmosphere of that evening with the impending storm and that burning sky. Raw photos never show how it really looked, so it was part of the post processing to bring the photo to life.

The end result might have bit more drama than what I saw. But for me that’s exactly what a 2D image needs to make up for the missing dimension, the missing sounds, the blowing wind on my skin and all the other impressions that I absorbed while taking the photos but couldn’t capture.