Finally it’s time for the DRI step! In the last tutorial parts we prepared the source material and now we will use Enfuse GUI to actually blend the three images we have to an image which covers nearly the complete dynamic range of the scene. So first of all you should download Enfuse GUI and if you like the Program you can even drop it’s author a little donation. There’s also an Enfuse version which you can use directly in lightroom. But there you have to donate first to fully use it so we will stick to the above GUI Program.

So let’s start the program. As the GUI comes up you’ll see a big listbox to the left which says drag files or directories here . That’s what we will do. Go to the tiff files we prepared in Part 2 and drag them onto this listbox. One note here. If you are doing a whole series of DRI images which all have the same settings and light conditions, e.g. for a panoramic shot, you could drag the whole bunch there and Enfuse GUI will recognize which belong togheter.

Once the files are in the listbox you will see that Enfuse reads out the exif data of the files and shows the exposure details for each image. If we hit Enfuse it now without changing any settings we often already get good results but mostly we need to do some finetuning. Here’s the image we get without any tuning. 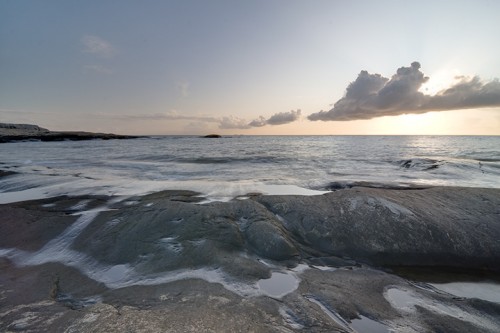 It’s a good start. The shadows are opened and the sky has enough detail in the highlights. But if you look at the left you’ll notice nearly black pixels on the island near the horizon. It’s not much but we have an exposure in our list which provides better detail there. We will now try to decrease the contrast a bit and make the transitions between the exposures a little more smooth. This we will do by increasing the Sigma parameter on the right to a value around 0.45 . We will hit the Preview … button to see the effect. Often the first try is not right so in the Preview window we will click the New tab and then go back to the EnfuseGUI window and change the Sigma a little more. We hit Preview … again and now in the Preview window we have two Results which we can compare. You could generate several more Results by repeating those steps. One thing you will notice is, that by increasing the Sigma parameter the whole image becomes less contrasty. You should not go to far here! Just try to find the setting where all shadows and highlights contain enough detail.

Remember the problem with our first try. There were those to dark pixels near the horizon. When changing the Sigma we could get rid of this but the image got quite flat. So what we can do is create another Result where we increase the Mu a bit and also the Sigma. In this case Sigma needs not to be increased as much since now both settings play together to open up the shadows. Yeah quite complicated 😉 but just use as much Preview tabs as needed and play around with the settings. You can then easily compare and when hitting each Preview tab you will notice that in the EnfuseGUI window the settings are switched to the exact setting you used for each Preview. So after you found the setting you like best you just need to hit Enfuse it and the blended Image will look as the preview. Great!

So here’s the image I enfused with a Sigma of 0.45 and a Mu of 0.51. Those settings might not be ideal for your case so it’s always a process of trying like I showed above. 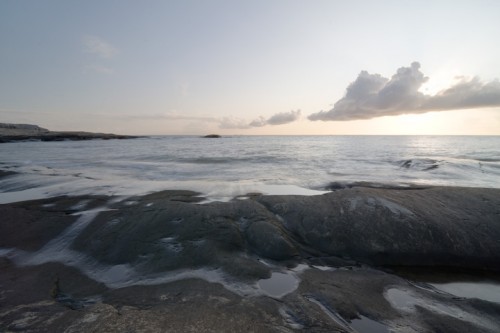 Looking at this image shows that it looks a bit more dull than our first try which comes from the reduced contrast. But you will also notice that we now have better detail in all shadow parts. The area above the clouds might look a little to bright but it’s not complete white! So all in all this image is a good starting point for further postprocessing. You could now go to Photoshop with it and start to tweek the contrast and color to bring a little more live to the picture or you can just go back to Lightroom with it. This is what we will do in Part 4 .

So if you have questions or suggestions I encourage you to write comments. It’s always good to have some kind of exchange! For example somebody might want to play around with the other parameters Enfuse GUI provides and tell about his insights. I found that Sigma and Mu are enough to finetune the image and the other settings often create some harsh contrasts in the area of single pixels which looks bad in an image.

Anyway I hope you liked the tutorial so far 🙂 regards