Ponta de São Lourenço is a little peninsula in the far East of the island of Madeira just next to the town of Caniçal. In this article I show you the best vantage points, from which to photograph it. Those views are some of the most spectacular on the whole island and I hope the photos and the video I share below capture their grandeur.

After staying near Porto Moniz in the northwest of Madeira for one week, we switched locations to focus on the eastern part of the island. As I wrote in the last article, this saved us a lot of time in the car. As our new homebase we selected the town Santo da Serra, because from there we had both the mountains and the coast within a 30 minute drive radius from our hotel, the Quinta Santo Antonio da Serra.

Santo da Serra lies at an elevation of around 800 meters. Thus it's both a winding drive down to the coast and up into the mountains, which was quite taxing for our little Fiat Panda. The main reason for us to stay there and not in one of the coastal towns was to shorten the drive up to Pico Arieiro, which lies at an elevation of 1800 meters. Exploring this beautiful mountain was another goal I had for our second week on Madeira. In the next article I'll talk more about it.

If we had just been interested in the coast, staying somewhere around Funchal or Machico would have certainly been a better option. But who visits Madeira and doesn't want to experience the views from its tallest peeks? We certainly didn't want to miss it.

But back to Ponta de Sao Lourenco. Photographing this beautiful peninsula is quite straight forward as most views are close to a car park and marked well as Miraduro or Photospot on Google maps.

The most popular and maybe most spectacular viewpoint can be reached via a short hike of about 20 minutes. Starting at the Ponta de Sao Lourenco car park, just follow the PR8 route – Vereda da Ponta de São Lourenço. The path first descends into a little valley and then climbs again. If you look to your left you'll see a steep hill with a stone structure at its top. On Google Maps, this spot is conveniently marked as Sao Lourenco Photospot.

Leave the PR8 and hike up a little path towards this structure and you'll be presented with this view. 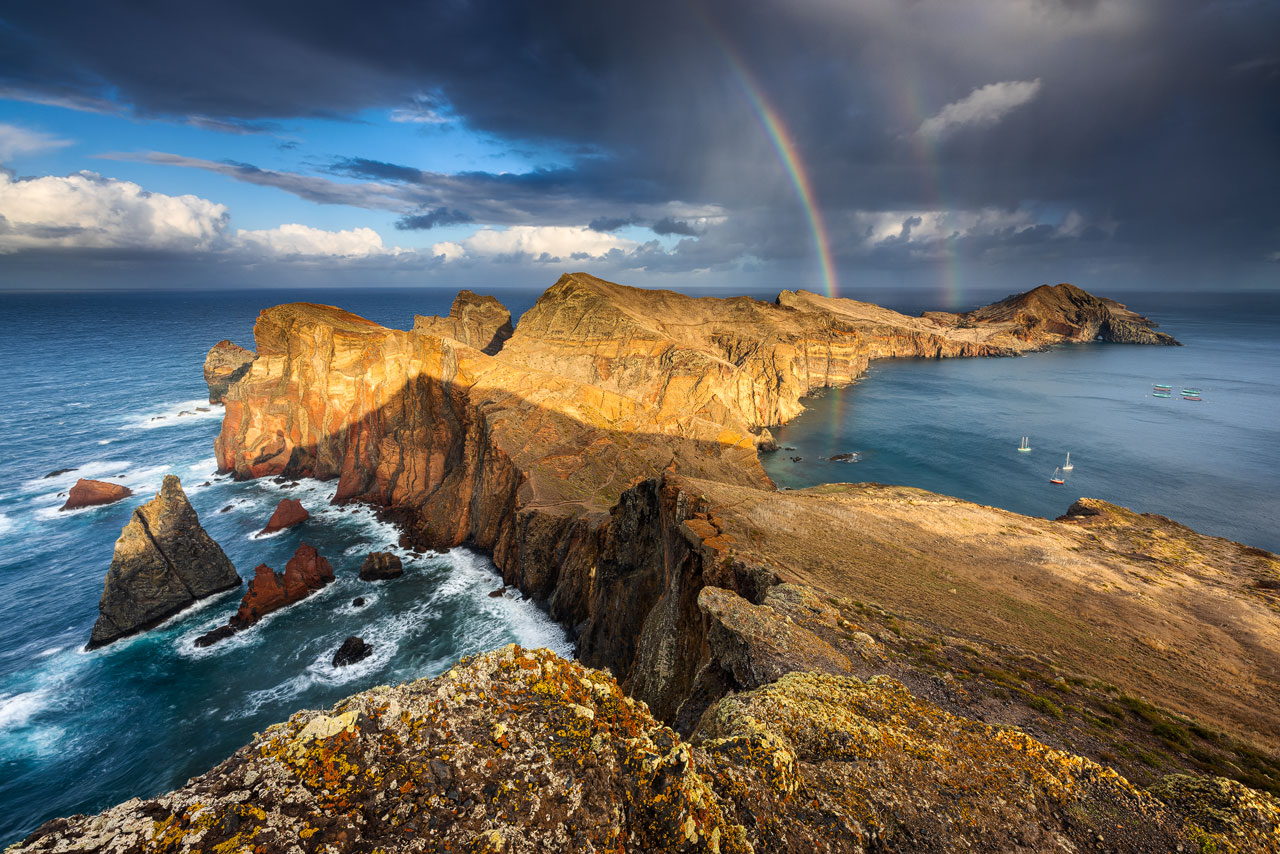 I first went there in the evening to do some scouting, since I wasn't yet familiar with this place. Just as I arrived up at the viewpoint a double rainbow appeared in the East as dark rain clouds drifted across the horizon. It was a magical and fleeting moment and I'm glad I was able to capture it.

Typically you'll see photos from this location, which were taken at sunrise. This is something I also had in mind. But with the evening sun casting long shadows and bathing the cliffs into warm light, I have to say that photographing from this viewpoint at sunset is definitely an option – especially with the chance to capture a rainbow when the weather moves in from the sea.

There's a second spectacular viewpoint not far, which is located just next to the Ponta do Rosto car park. During day this area – same as the Ponta de Sao Lourenco – gets very crowded and it might be hard to find a free parking space. But in the morning and evening you shouldn't have a problem, especially in the winter months.

At Ponta do Rosto you will again have the option to photograph towards Ponta de Sao Lourenco. It's a spectacular view in this direction, but not as dramatic as the first view I shared above. I would rather suggest to go there for sunset and walk the few 100 meters to the Miradouro da Luna.

This is what I did on a very stormy evening. Up on the cliffs I had a spectacular view towards Caniçal and the mountains of Madeira behind being swallowed by dark clouds. I had to firmly hold on to my tripod to prevent it from falling over while taking the photos. In such situations it's good to find a spot with a nice foreground. I can then setup my camera very low above the ground to reduce its exposure to the wind. 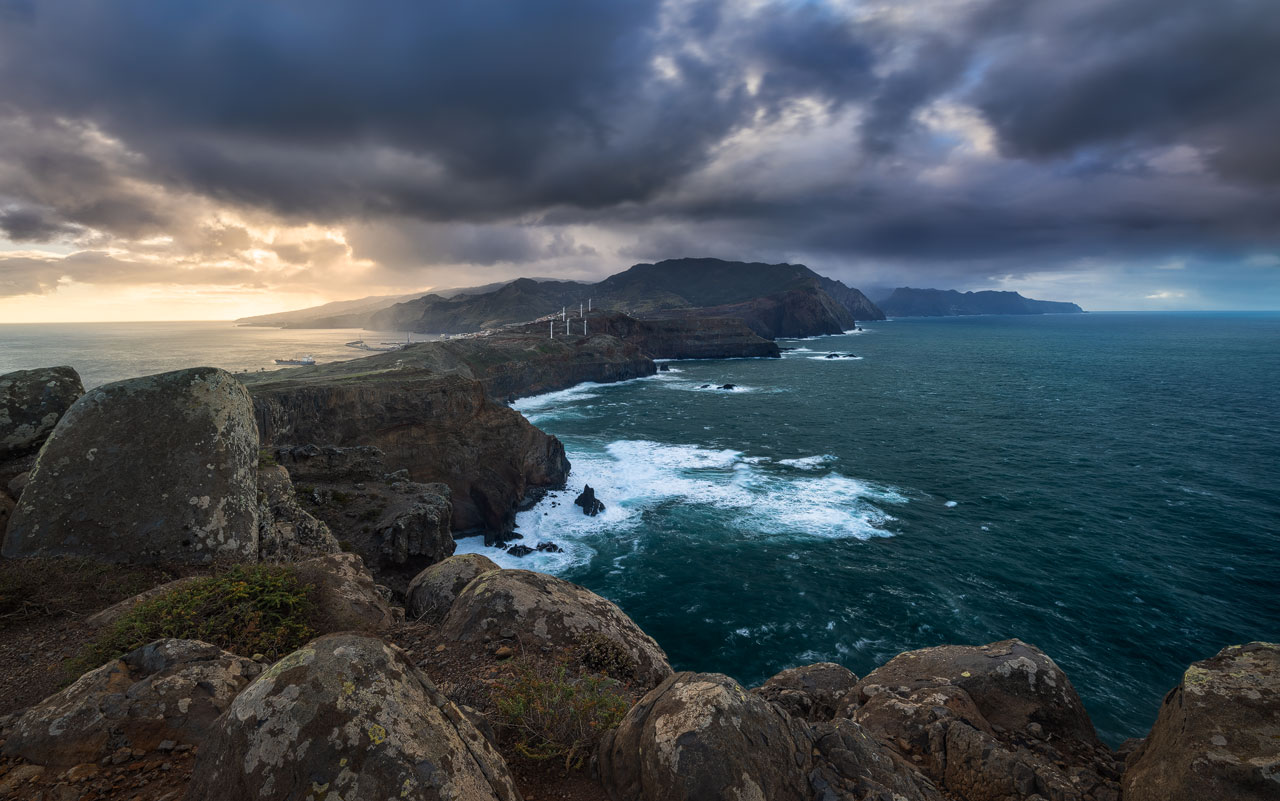 Scrolling around on Google Maps I came across a third viewpoint, which, after a little research, I found was much less photographed. This got me curious and I drove there around noon for some exploration. What I found was the, in my opinion, most interesting view towards Ponta de Sao Lourenco. The reason for it were the rock formations at the viewpoint.

This area reminded me a bit of the Atacama desert, which I had visited a few years ago. Shaped by wind and rain it seemed very delicate to me and I'm surprised that it wasn't fenced of in any way. For this reason, if you ever plan to visit, be sure to step carefully and certainly don't climb on the eroded rocks. I'll not put a name to this viewpoint, although I don't think it's a big secret. I certainly wasn't the only person there.

To capture the best possible photo I returned twice for sunrise. On my second visit I was presented with a combination of light and rain, which resulted in the most spectacular conditions I experienced while visiting Madeira. 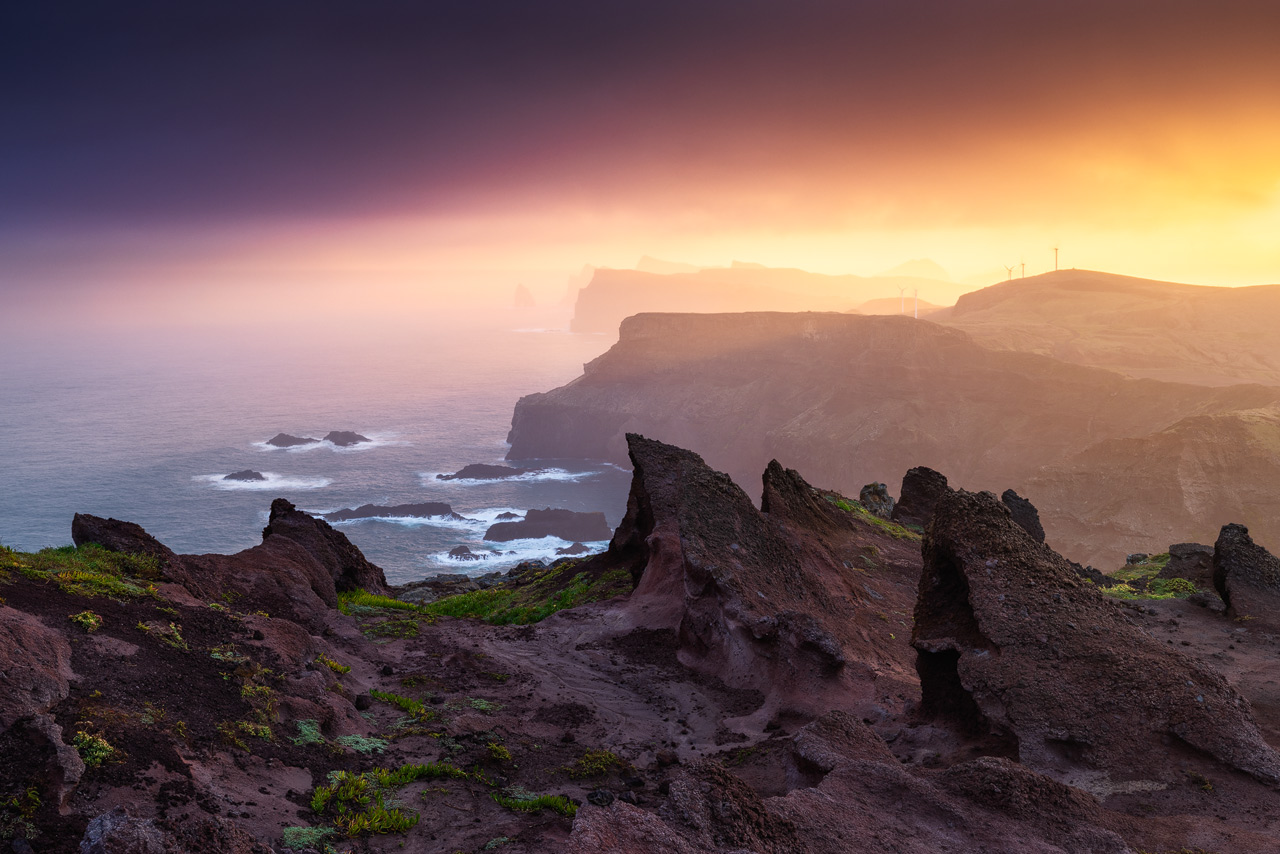 As usual for my articles I also have a behind the scenes video to share with you. In it I give you additional tips on how to best photograph Ponta de Sao Lourenco. Be sure to watch it.