With a depth of up to 1350 meters and many vertical drops along its edge, the Vikos Gorge in northern Greece is one of the deepest canyons in the world. And not only is this area great for hiking, but it's also an awesome place for landscape photography. In this photography guide, I share some of my favorite photo spots around the Vikos Gorge.

The region of Epirus, to which the Vikos Gorge belongs, is very mountainous. I was already amazed by this landscape during our drive to Corfu when we passed through these mountains. While there are many interesting photo locations in Epirus, I picked the Vikos Canyon because it showed the best photographic potential during my research. There, you can find rivers, forests, canyons, mountains and some beautiful alpine lakes.

The four days we had planned for our visit were not enough, and I will have to return in the future. Then, I will also explore other places in northern Greece. If you have time and are interested in hiking and landscape photography, I'd say you can easily spend two weeks in the Greek mountains and not get bored.

I visited this region in early summer, and the area was still green and vibrant. But I reckon autumn would be even better suited for landscape photography. The temperatures should be a bit more pleasant, the weather more predictable, and the fall colors will make this place even more photogenic. 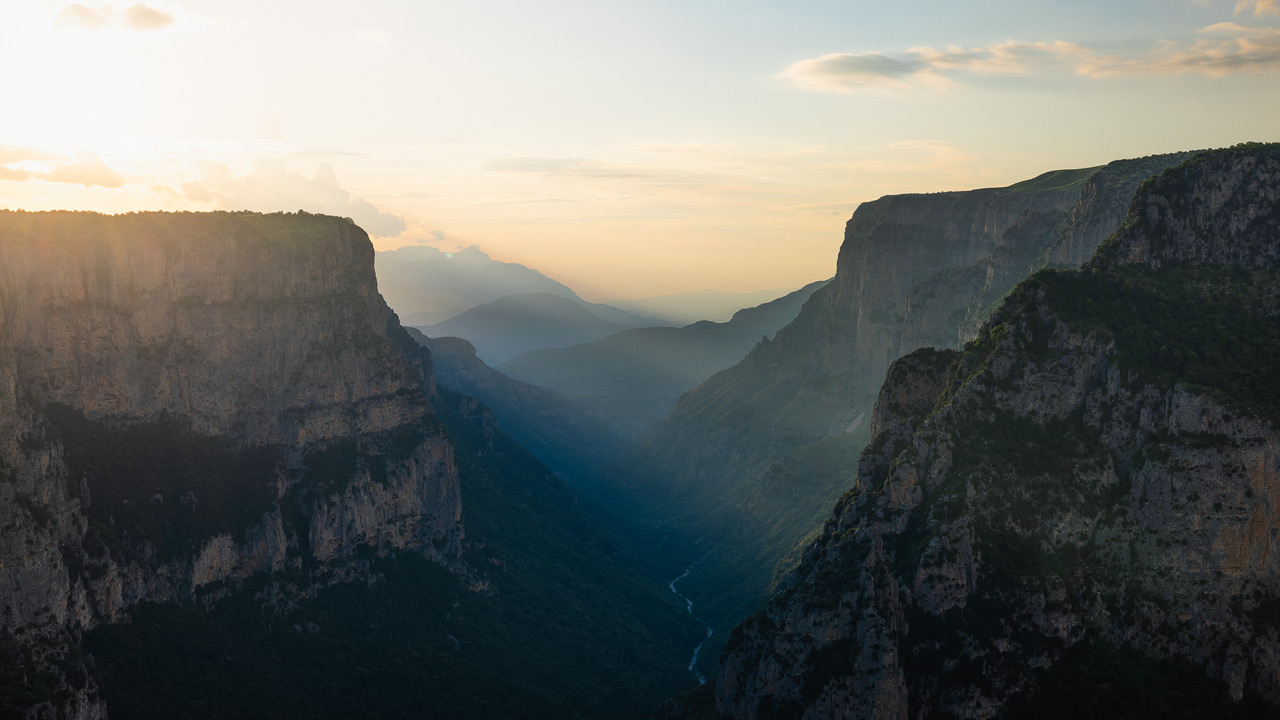 How To Get To Vikos

To get to the Vikos Canyon, you'll have to spend some time on the road. From Athens, it's a seven-hour drive there. Since such a long drive can be tiring, I'd recommend a stop in Meteora. Spend one or two days there and explore the magnificent viewpoints before continuing north.

If you can find a flight to Thessaloniki, you can reach the Vikos Canyon in less than four hours from the airport.

Where To Stay in Vikos

Vikos is not only the name of the gorge but also of a village at the edge of the canyon. From the town of Vikos you can directly hike down into the gorge, and from what I've seen, it's a charming little village with a few guesthouses and restaurants. But if you want to explore all around the canyon, it's not ideal. It lies at the northern end of the gorge, and it takes a lot of driving to get to the southern part.

Aristi is a larger town nearby, with more accommodation options. You can drive to Vikos and the Vikos Gorge trailhead in 10 minutes and up to Papingo in 20 minutes. The viewpoints in the south are still a one-hour drive away. But if you want to explore the area around the Tymfi mountain and hike along the gorge, it might be a good place to stay.

The southern part of the Vikos gorge is no less beautiful. There you'll find many ancient bridges, several viewpoints, and some beautiful hiking trails. Kapesovo, Monodendri, and Koukouli are well-located villages in this area. If most of your interest lies in the south, try to find accommodation there.

Another option would be to stay in Kalpaki or one of the towns close to the E853 road. This would reduce your time on winding mountain roads if you want to explore the north and south. The area itself is not very scenic though. You will always have to put in a drive to get to places of interest.

Photo Spots Around the Vikos Canyon

As usual, in my photography guides, I don't provide a list of every photo spot in an area. I focus on the locations that appealed to me the most, so the selection below is biased.

I also encourage you to head out to explore and not solely rely on guides like this one. Especially in northern Greece, there's still so much to discover. All it takes is curiosity and the will to put in the work. In the video, I give tips on how I plan my scouting missions and how I increase my chances of finding unique photo spots.

The first viewpoint I found during my research was the Beloi view in the south, close to the village of Vradeto. You'll also find the famous Vradeto Steps nearby, which I skipped because I didn't see too much photographic potential there. But maybe you have time for those and can prove me wrong.

The Beloi view was tricky to photograph. There's a walled viewing area right at the edge of the gorge. The views from there are spectacular, especially during sunset. But I had a hard time finding an interesting foreground.

The cliffs next to the viewpoint are also not very accessible, which leaves only a few opportunities to set up a tripod. Luckily I found the perfect angle just in time for sunset. Maybe 50 meters before reaching the viewing area, there's a little path heading through the trees on the left. After a little scramble, you'll find a rocky plateau with some trees that you can use as a compositional element. I think that this view will look fantastic in autumn, too. 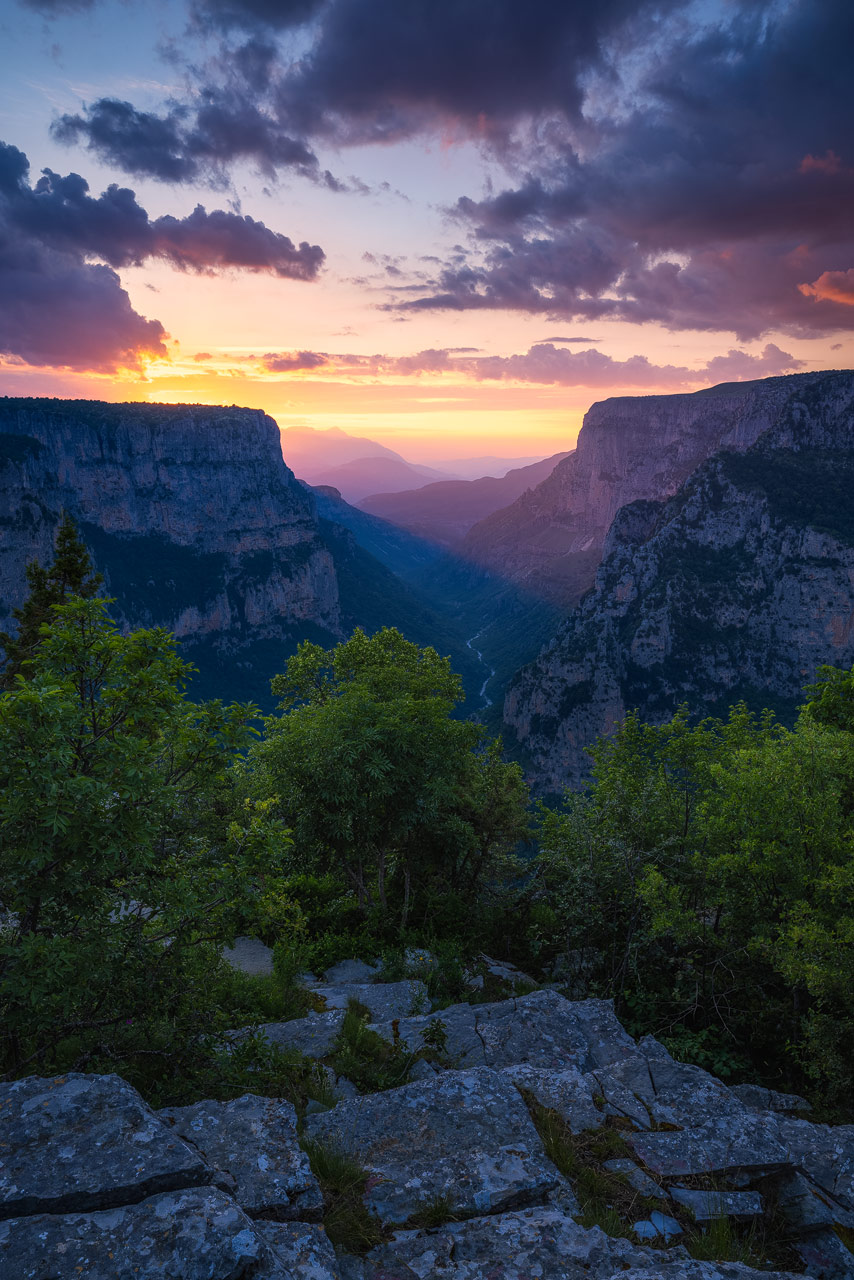 During the 20-minute hike to the Beloi Viewpoint, I noticed the beautiful, hilly landscape. It led me to return for more exploration of the area. If you watched my scouting video above, you already know the outcome. Starting at the Beloi View car park, I hiked in a northeastern direction to discover the following view. 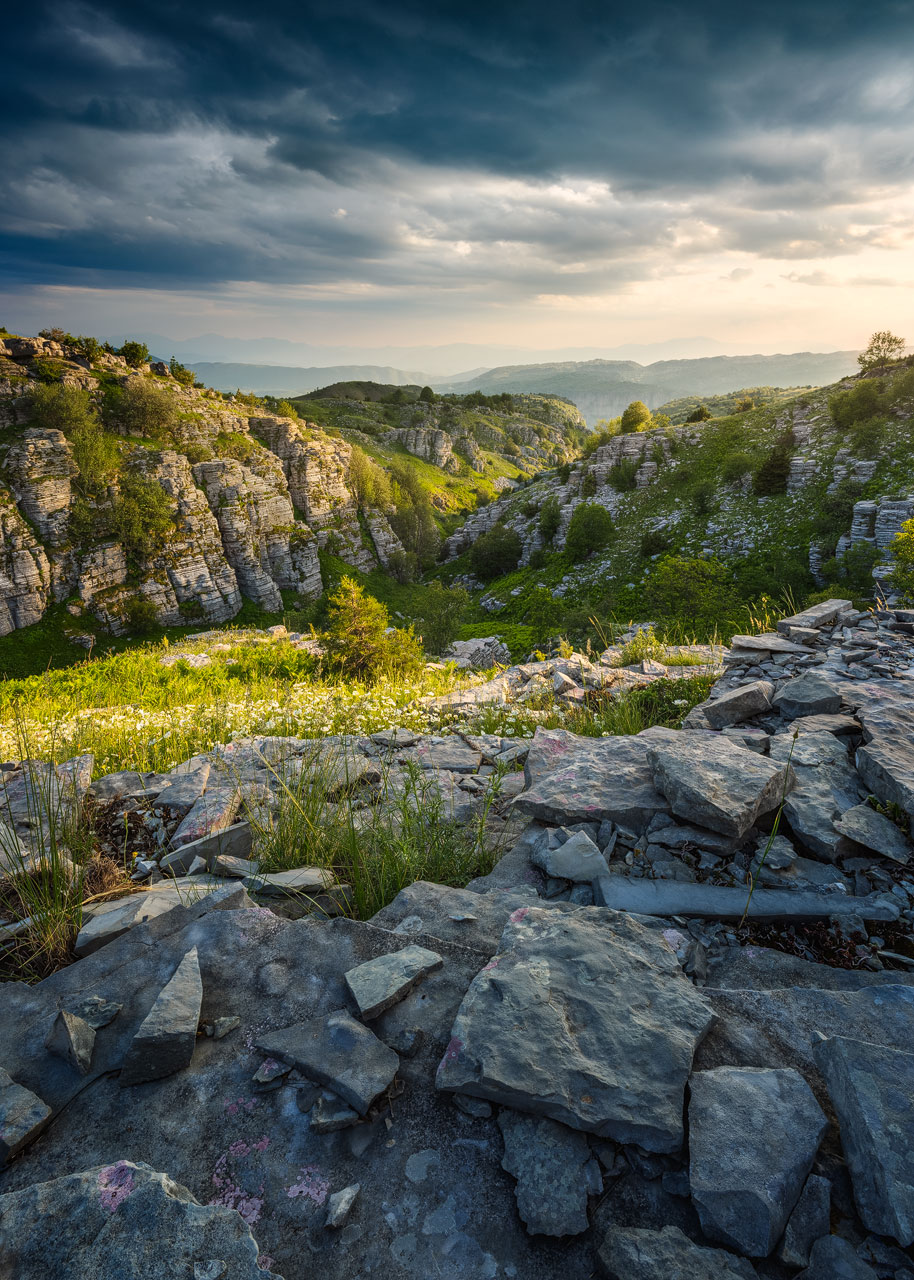 What you see in this photo are the characteristic stacked rock formations, which you'll find everywhere around the Vikos Canyon. I'm sure you can find many more views like this in the area.

With the hot weather, those pools didn't only prove to be a great photo subject, but they also made for a nice refreshment. 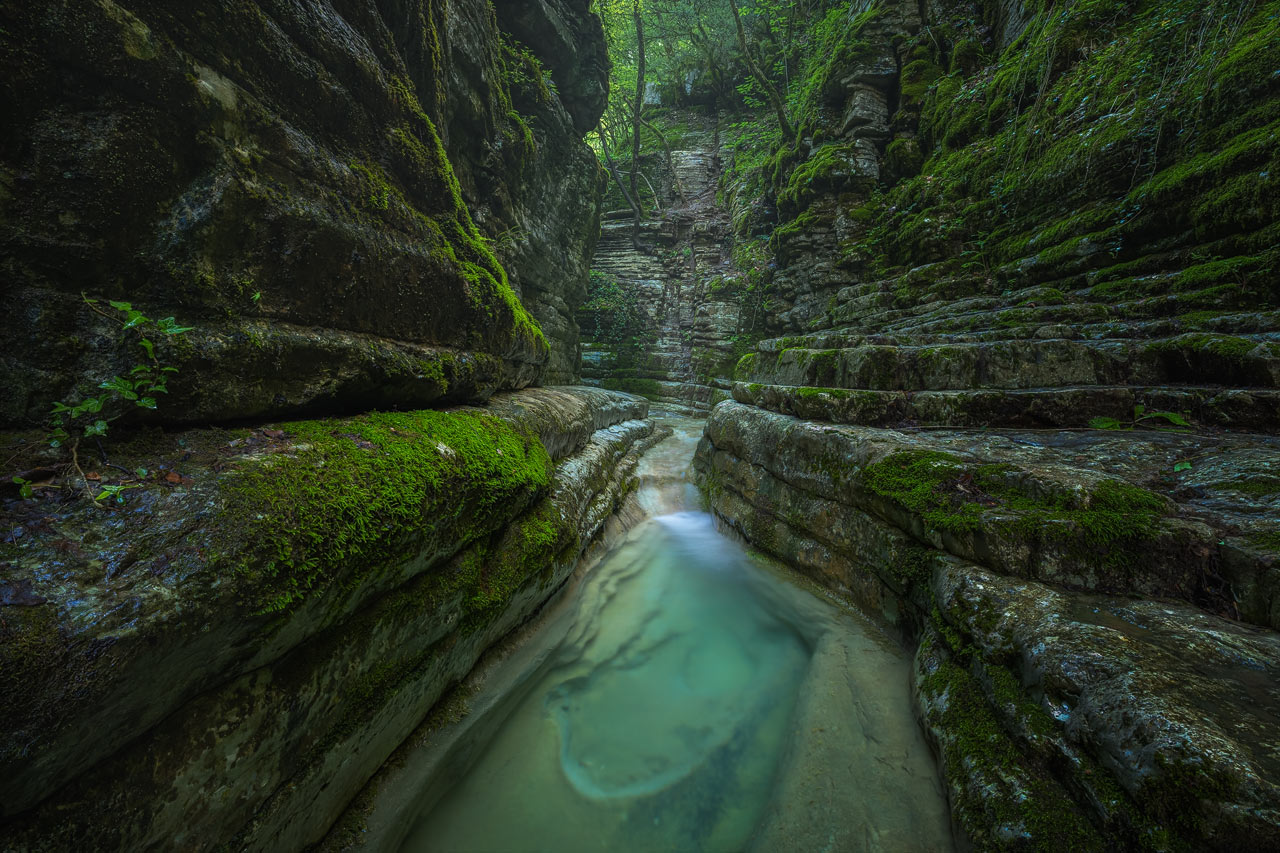 If you plan a visit, try to be there early. Around noon, the sun will light up the canyon, which takes away from the mood you see in the photo above. Also, bring your swim shorts and venture deep into the canyon to discover the best angles.

If the Papingo Rock Pools are not cold enough for you, try the Voidomatis Springs, which are said to have a year-round temperature of 4°C. I didn't believe this to be true until I checked.

A dip of 30 seconds was all I could manage. It's freezing but also very reviving. And yes, there are also some photos to be taken down there and along the way.

The hike starts in Vikos town and goes straight down into the gorge. I was there around noon, but I believe you'll get the best light in the morning when the sun starts to peak over the rim of the canyon. On the way down, you'll find many angles for photographing the Vikos Canyon. 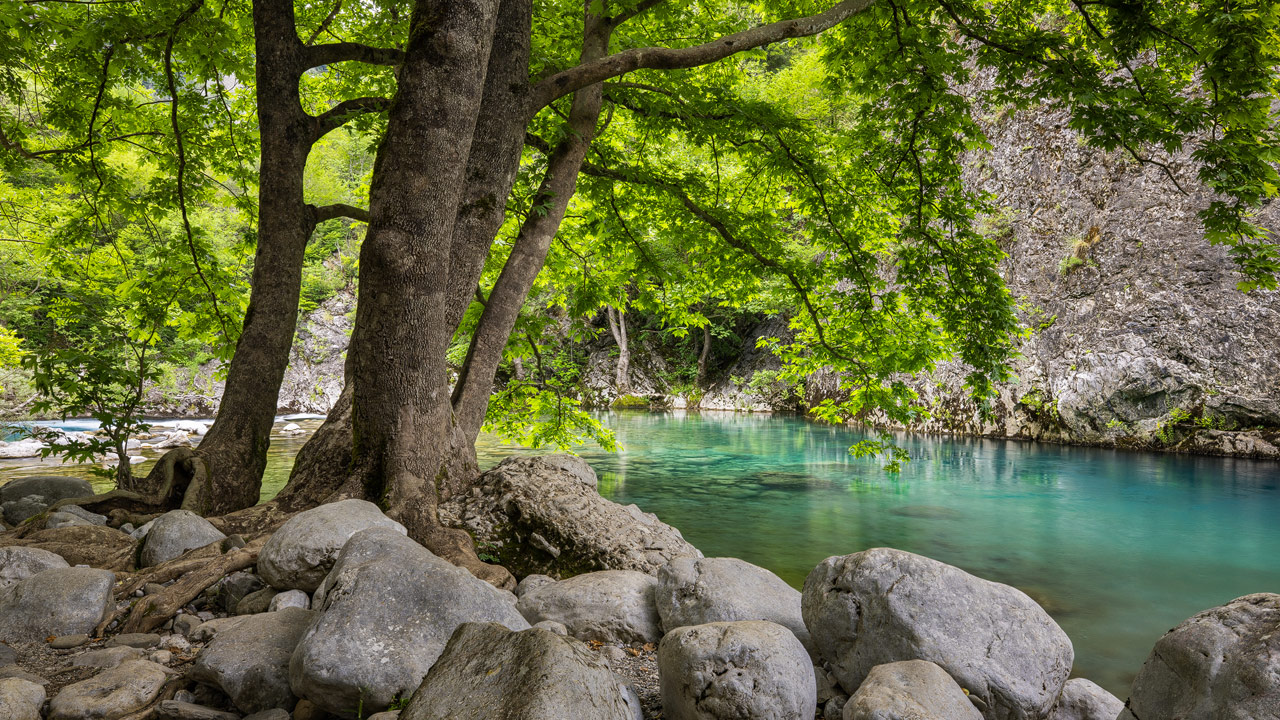 I didn't have the right light during my hike, but I found the colors down at the sprints were still worth a photo.

As with the Beloi Viewpoint, I expect this area to look spectacular with fall foliage.

I've already mentioned Drakolimni above. I planned to hike there and spend the night either in Timfi's Mountain Refuge or under an open sky close to the lake.

The fact that I cannot show you a photo here already tells you that I couldn't do so as planned. The weather in June was just too unpredictable with regular thunderstorms, and I didn't want to risk being caught in one of those in this exposed area.

But if I ever return, I have to make up for it. Just google Drakolimni, and you'll know why.

Other Places of Interest

On the way to Vradeto, I passed the dried-up river bed of Voïdomátis Potamós. There, I found several arched stone bridges. Some of them would look great in a photo, provided Voïdomátis Potamós held some water. I've seen images from different times of the year when it wasn't dry, and it looks beautiful. 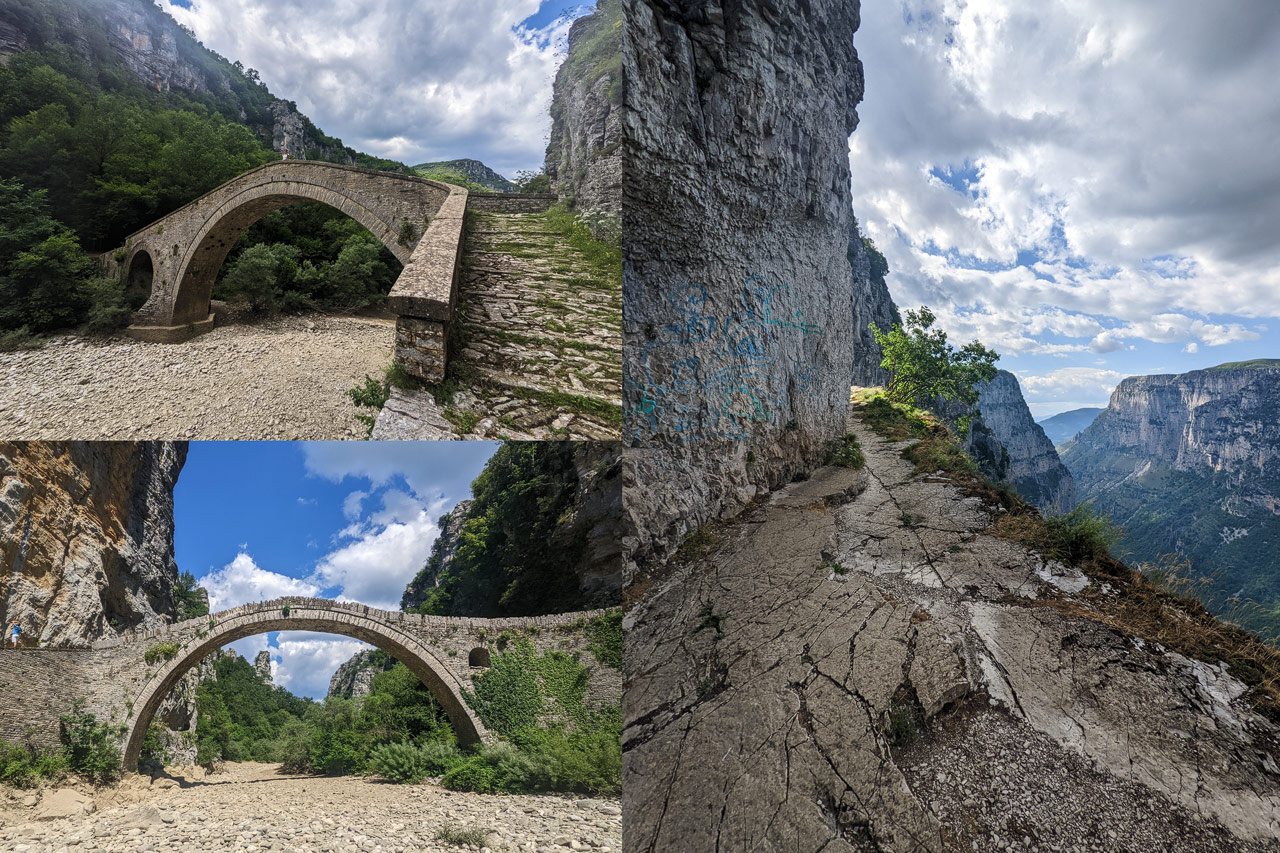 On our last day, we also went to the Oxya Viewpoint. It's spectacular but not necessarily a great photo spot. I failed to find a balanced composition with a good foreground there.

Up at the parking lot, where you head straight to the official viewpoint, you can also follow a little path to the left to reach a view just above Oxya. It's better but also hard to photograph.

I'd say any views along the western edge of the canyon have the problem of facing the canyon wall on the opposite side. The views from Vikos and Beloi are along the canyon, which makes for much better photos.