The Cyclades had been on my list of future photo destinations for a long time, and this May, after our two weeks on Crete, it was finally time to explore some of these beautiful islands. Maybe the most popular islands of the Cyclades are Santorini and Mykonos, which we intentionally skipped. They are too crowded for my taste. Instead, we made Paros our first stop, and in this article, I show you some of my favorite photo spots on the island. 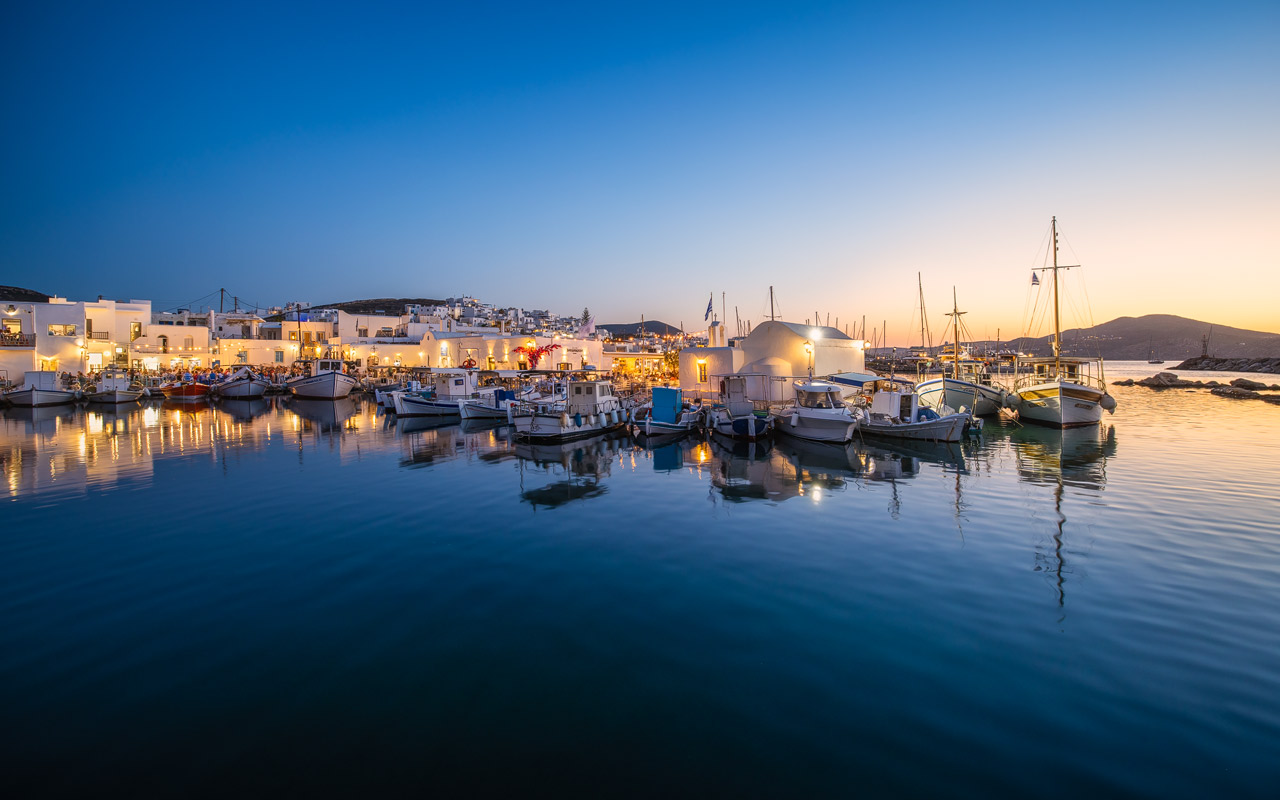 How To Get to Paros

Most of the Cyclades have airports. But only a few are reachable via direct, international flights. For islands like Paros, a stop in Athens or Thessaloniki is necessary. From there, you usually find flights with Olympic Air or Aegean Airlines.

The most popular way of getting to Paros and the other Cyclades is via ferry, which I'd recommend if you plan to visit not only one but several islands in the Aegean sea. We did such an island-hopping from Crete to Paros, then to Milos, and finally to Piräus. The ferry from Crete to Paros took five hours.

Despite the long ride, it was a comfortable crossing. If you travel by plane, you must plan additional time to drop off your luggage and get through security. For boarding a ferry, you can arrive 30 minutes before departure and board with all your luggage. Many ferry companies have online check-in, and you get a digital ticket sent to your cell phone.

Now, to get the most out of a visit to Paros, I recommend a rental car. The island is relatively small, and there are regular buses between the major towns. But for photography, it's essential to be flexible, and for that a car is necessary.

If you want to bring a rental car via ferry, try to be there about 60 minutes before departure to secure your spot in the line. Boarding Greek ferries with a car can be hectic, as I learned firsthand during our crossing to Corfu a few weeks later.

You can also rent a car directly on the Cyclades. At each port or airport, you'll find several rental companies. On Paros, we had a good experience with AutoUnion.

Where To Stay on Paros

The most photogenic towns on Paros are Naoussa and Lefkes. Since Lefkes is located in the backcountry, I wouldn't make it my home base for photography. Naoussa is much better suited for that. But it's also the most popular town on the island and very crowded.

You'll get more for your money if you stay in the Parikia area, which is also the location of the port. We had a wonderful time in Archipelagos Apartments*, which offer a great view of Parikia. From there, it's less than 20 minutes of driving to all the photo spots I show below. 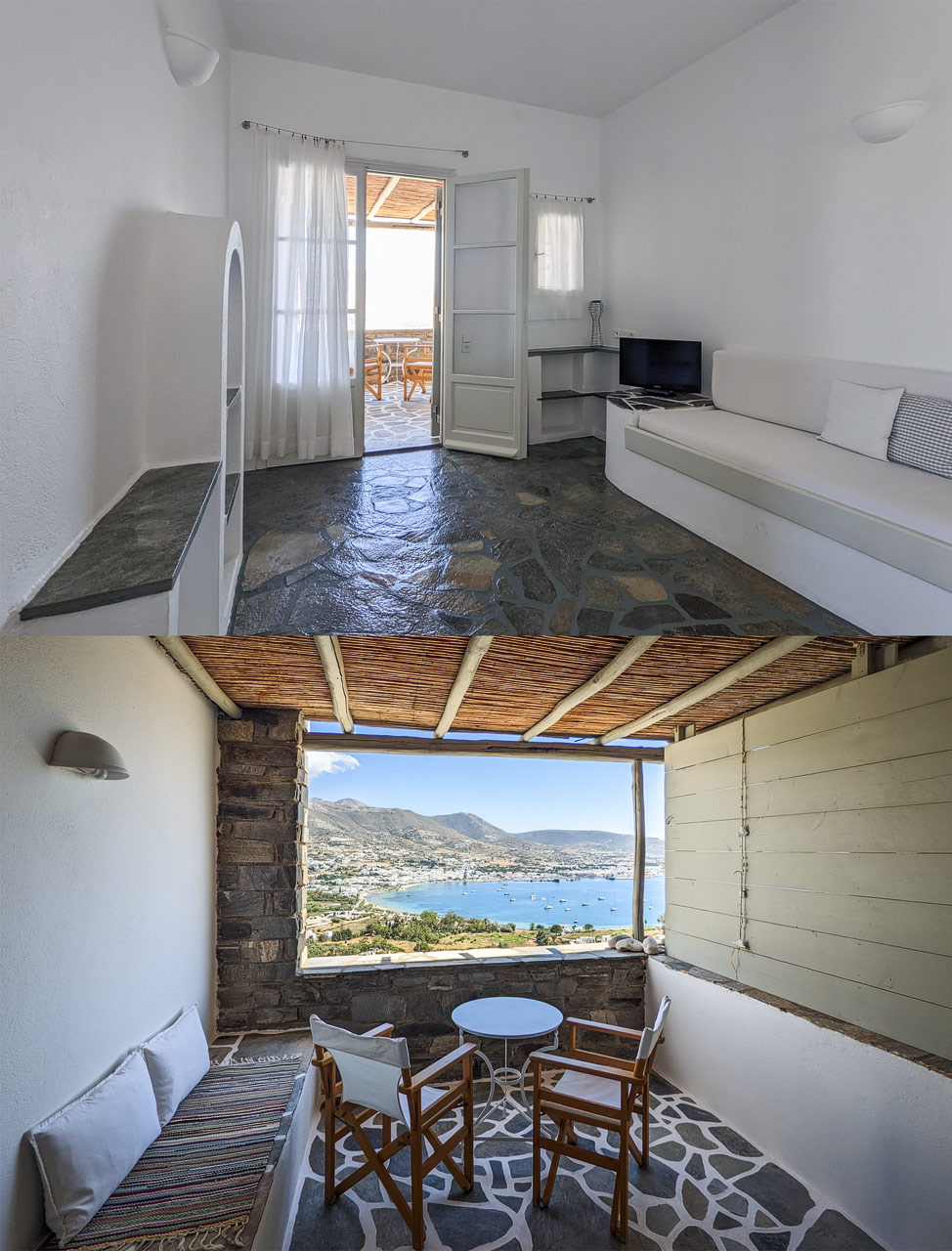 With our only four days on the island, it was impossible to explore all of it. So, the list of photo spots I share below is just a selection. There's certainly more to discover if you stay longer.

As I already mentioned, Naoussa is the most photogenic town on the island. During the day and especially in the evening it gets very crowded. It makes photographing its streets a challenge. The best photo spot for sunset is along the wall that connects the town to the Venetian Castle.

The first photo in this article was taken from there just after sunset. In the background, you can see the crowded restaurants. The image below was photographed from the opposite side, just next to the Barbarossa restaurant. Early in the morning, I was the only person there, which allowed me to explore compositions, which would be hard to photograph in the evening because of the crowds. 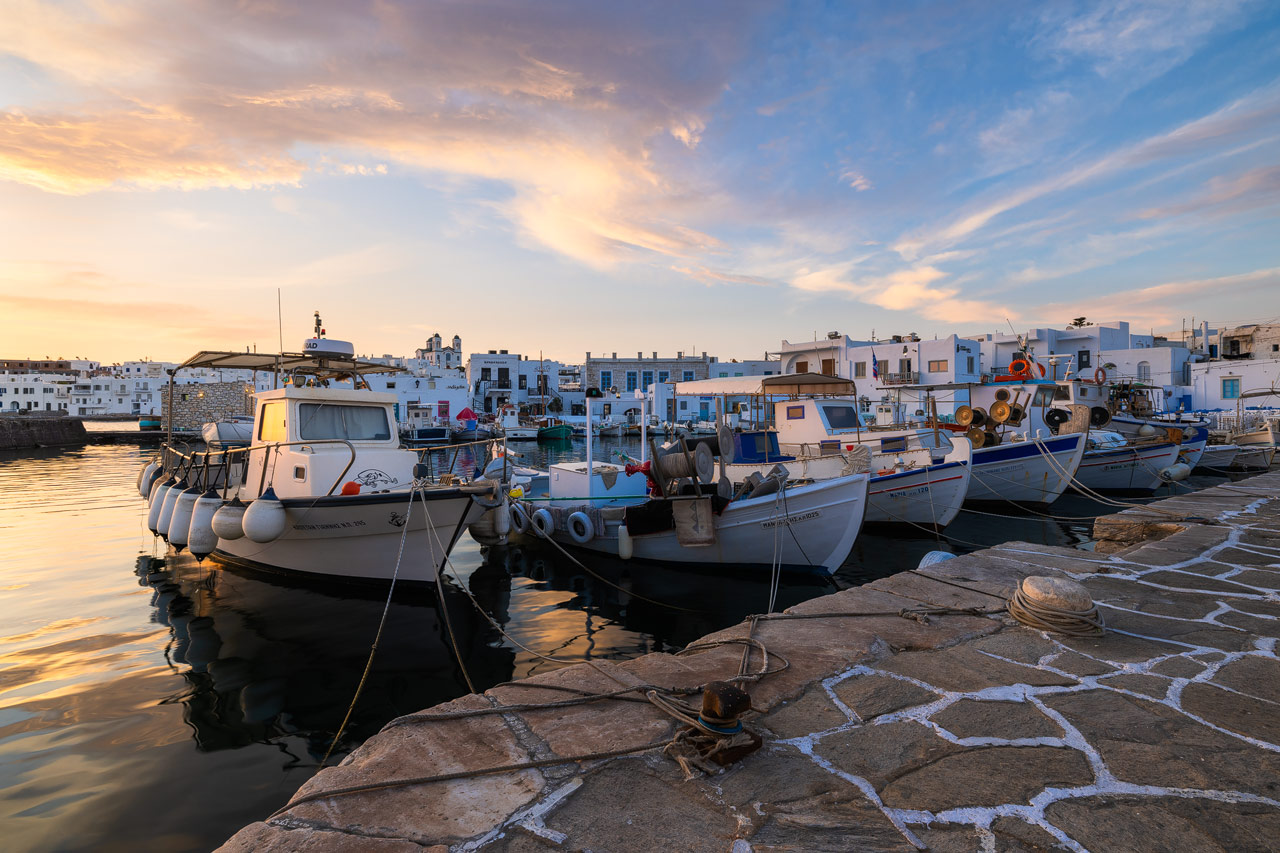 Naoussa also has some beautiful white alleys. If you have time, you'll find some interesting subjects there. I'd recon blue hour in the morning would be ideal for that. I was using that time to take photos along with the port though.

Lefkes is a beautiful little village in the mountains of Paros. We visited one day around noon, and the streets were nearly empty – no comparison to Naoussa. The photo I was after though, required some exploration around town.

If you follow the road from the public parking a little further up the mountain, you can find some great vantage points from which you can photograph the town with a long lens. Sunrise is the perfect time to do so, with the sun lighting up the hills in the background. 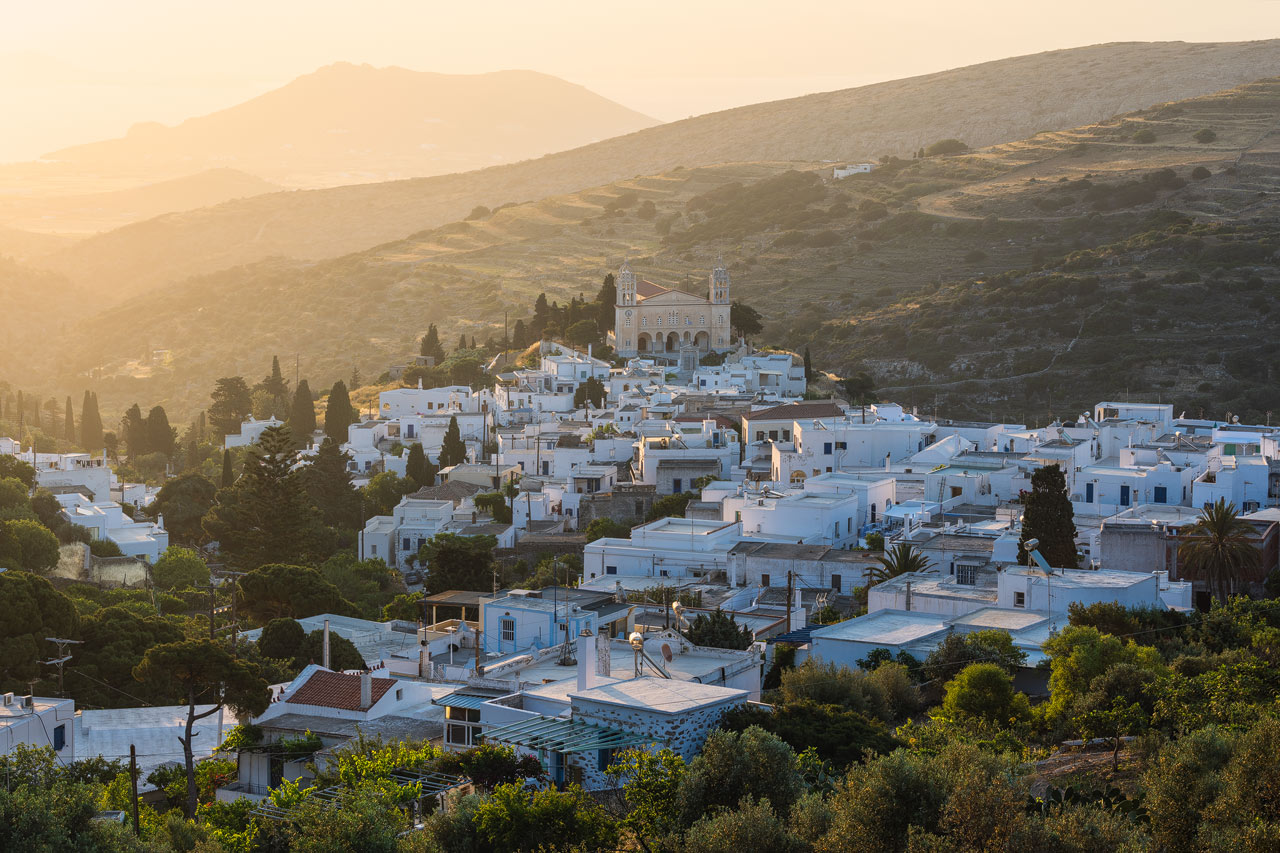 Be sure to scout this area in advance. Not every vantage point is suited for taking a great photo. You'll often have to deal with branches or power lines in the frame. But as you can see in the image above, there is at least one view free of those.

In addition to these two very photogenic villages, Paros also offers some spectacular coastal landscapes. If you want to photograph a beautiful beach, head to Kolimbithres for sunrise or sunset. The rocks there make for some interesting foregrounds.

But I was after another photo. I wanted to capture Paros Lighthouse surrounded by a spectacular rocky coastline. The problem I was facing was the absence of clouds, which is quite usual for the Cyclades during summer. But there's a solution. The rocks in Paros Park make for great, abstract subjects. I spent hours pointing my camera at various formations in the park. 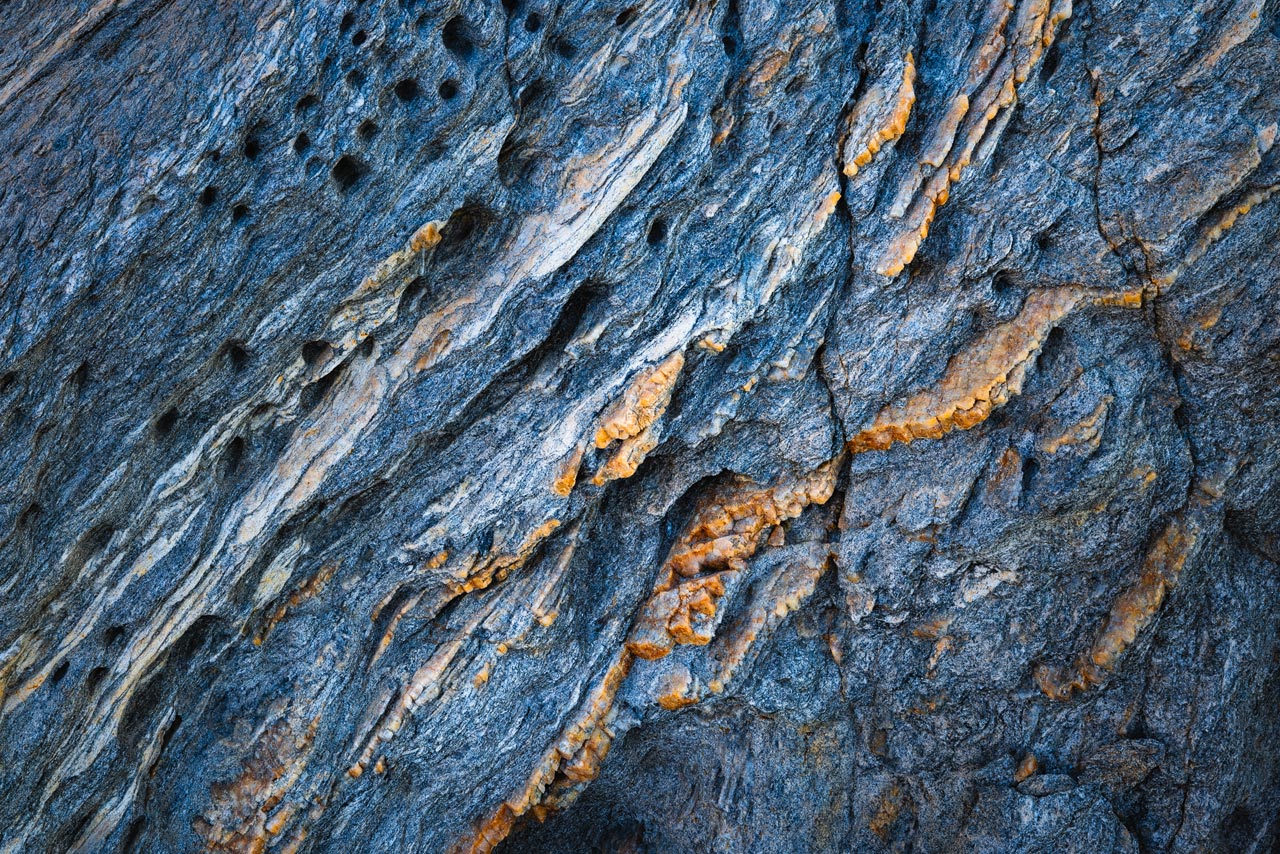 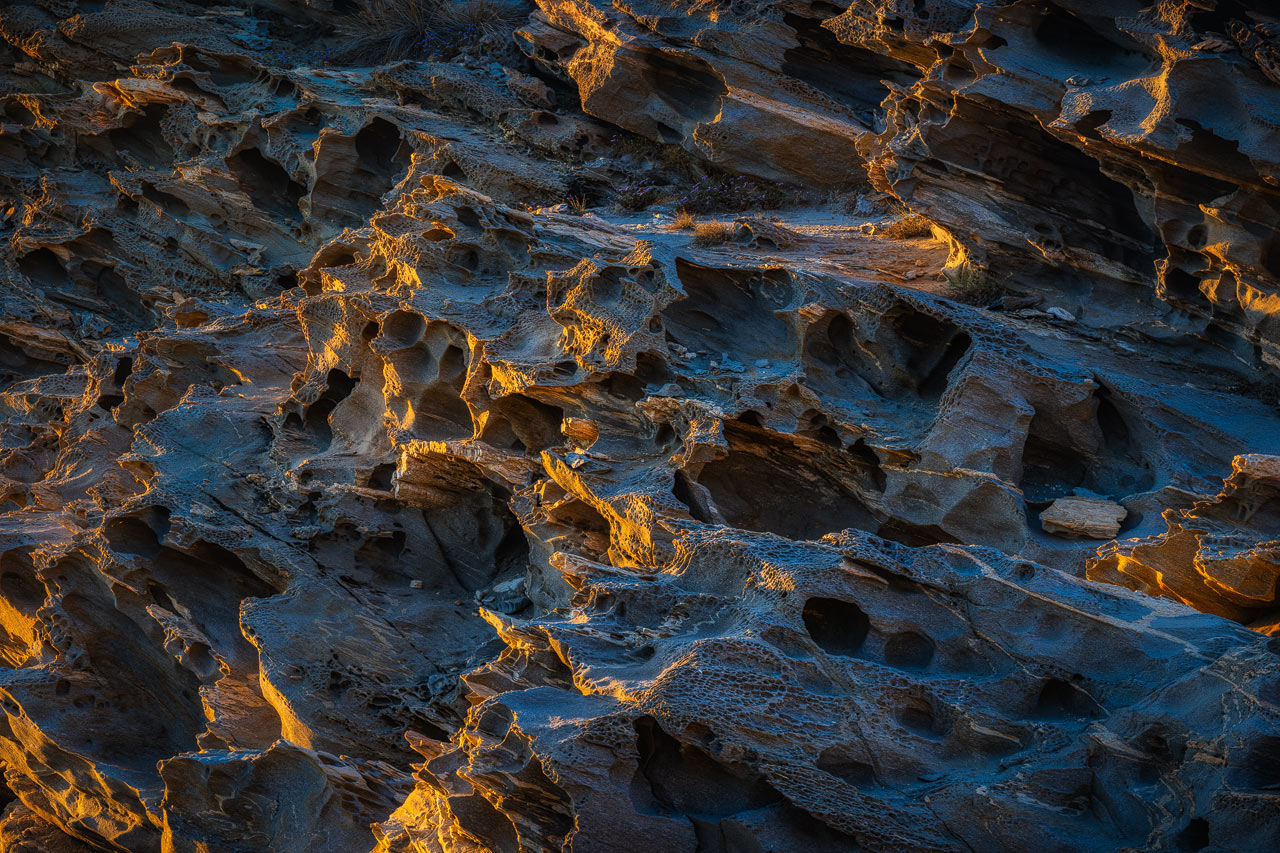 The photo of the lighthouse was just an afterthought in the end. It's really a subject for sunrise when there are clouds in the sky. If you ever visit Paros and get those conditions – jackpot. 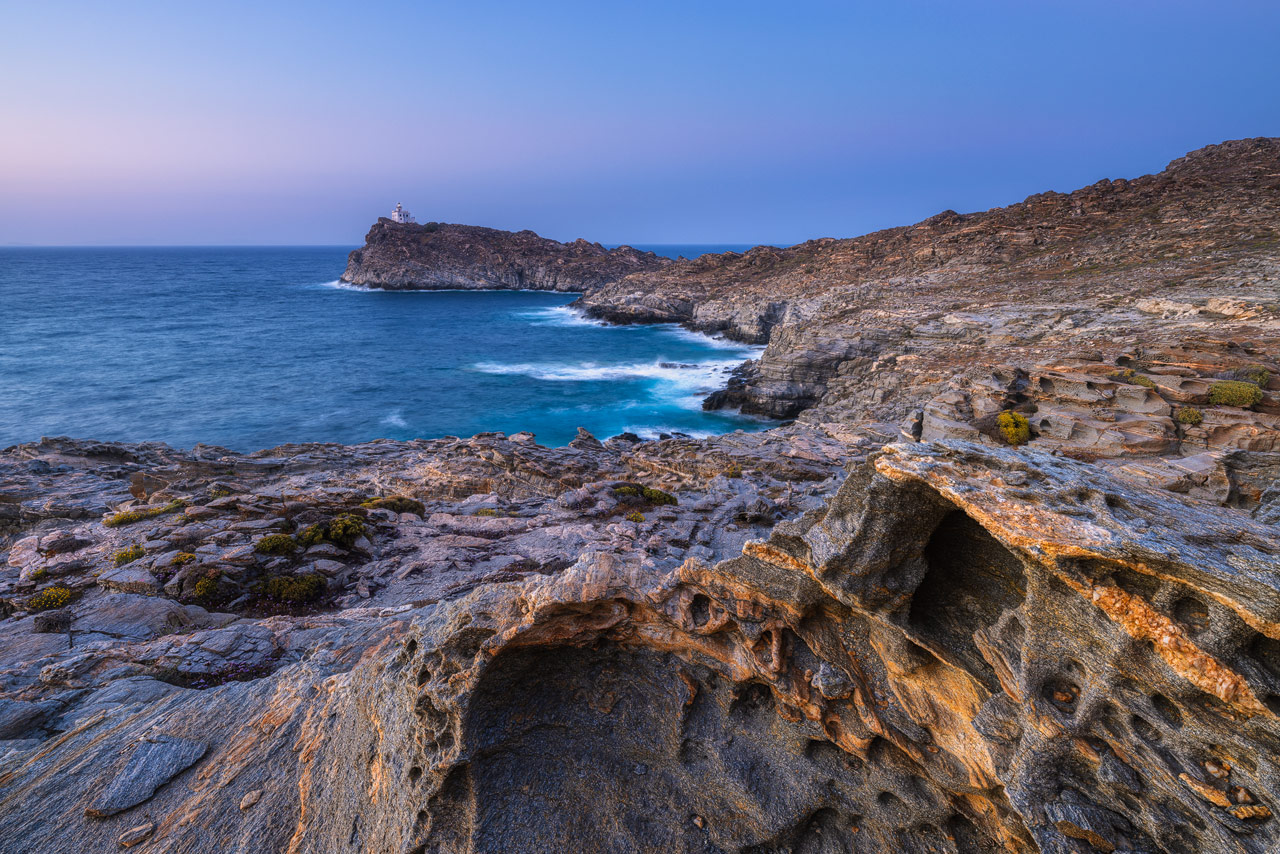 I also filmed a video, in which I take you behind the scenes of me taking the above photos.