When we decided to visit Crete, the largest of the Greek islands, this May, I was uncertain, if I would find enough subjects to photograph. The main reason for us to visit were the cheap flights, the affordable rental car and accommodation options, and the weather. My research for landscape photography locations came after that. And in this photography guide, I share the result of this research.

First things first: I won't be able to cover all of Crete in this article. As I learned quickly, Crete has a lot to offer for landscape photographers who don't mind the effort to get to some photo locations. The two weeks we spent on the island were split into one week in the northwest and one week in the east near Gouves.

Typically I wouldn't pick Gouves as a base for exploring the east of Crete. We were mainly there because my girlfriend was helping in a local animal shelter. They do great work at this shelter, and if you have a minute, check out their homepage and consider donating. 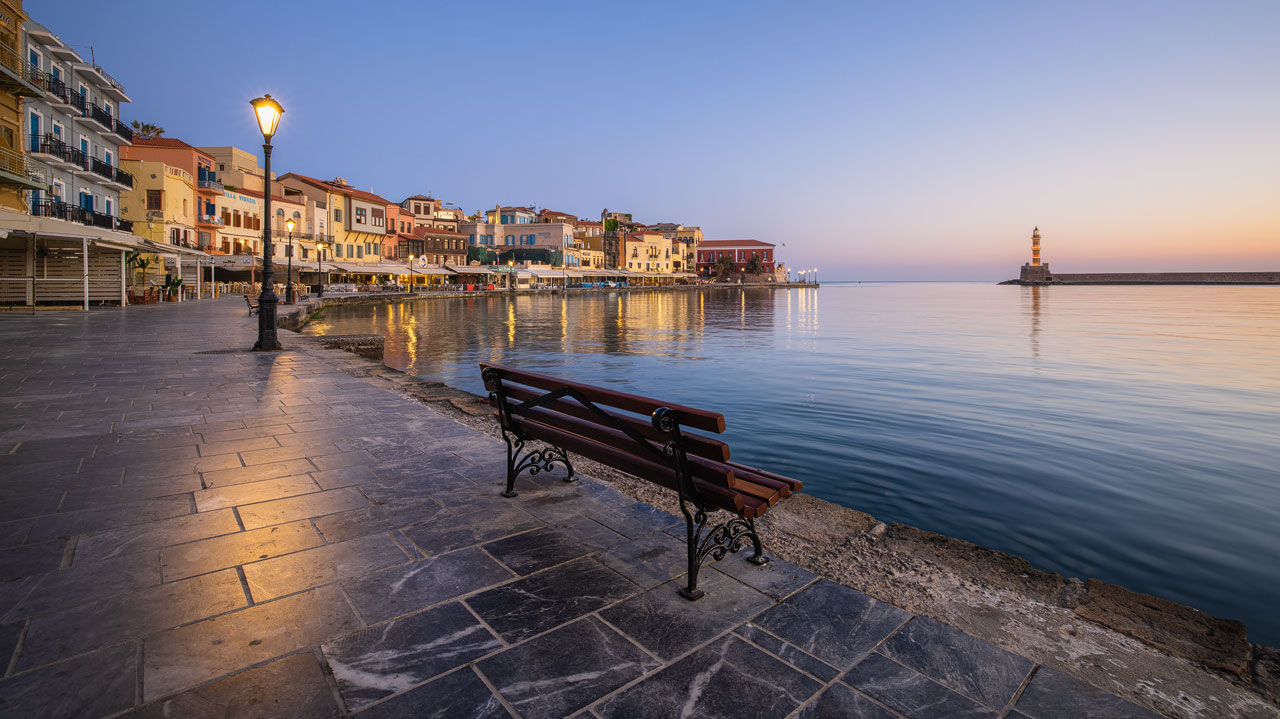 Let's start with the west of Crete. We picked this area because it wasn't hard to find beautiful photo locations during my research. So, in contrast to the Gouves area, it was a safe start photographically.

Picturesque locations are, among others: Chania harbor, as shown in the photo above, Balos beach, Elafonisi beach, Saitan Limani, Phalasarna, the Samaria Gorge, and Lefka Ori with its highest peak, Pachnes. The latter is pretty hard to reach. If you don't have a 4WD rental car, you'll need to organize transport from Anopolis. From there you'll be taken to the trailhead, 22 kilometers of gravel road up in the mountains. As we visited in late May, we could still see snow on those mountains.

With Phalasarna in the south and Balos beach in the north, the Gramvousa Peninsula is one of the most photogenic and spectacular places in western Crete. A good base for exploring this area is either Phalasarna or Kissamos. We stayed in a beautiful Airbnb in Kissamos, from where I could reach many interesting photo spots within one hour of driving.

For good reason, Balos beach is next to Elafonisi the most famous beach on Crete. It has beautiful turquoise water and is surrounded by cliffs, which offer fantastic views. Getting there by car is not so much fun. It's slow going on the nine kilometers of gravel road that lead to the parking area above the beach. The condition of the road is ok, but you should still take care because of the many rocks. Those small rental cars often don't have the best tires.

Once you arrive at the parking area, you have several options to take photos. You can walk down to the beach and photograph it from the little dunes on the southern side or stay up on the cliffs to the right of the trail to experience views like this one. 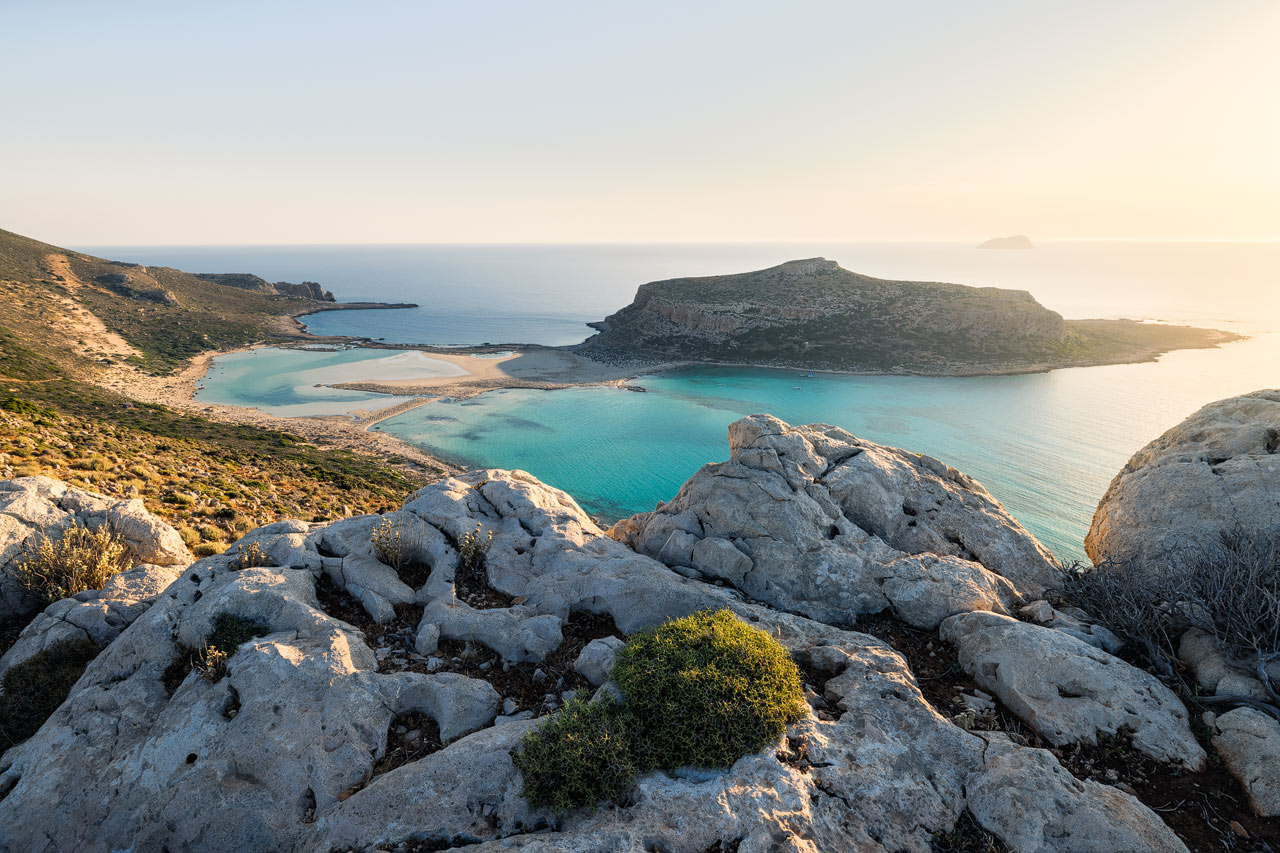 You can also take a walk to the northern tip of the peninsula, where you should have spectacular views of Balos. Bring the long lens for that.

I already mentioned Phalasarna in the south: drive to the northern end of this town and follow the gravel road for about one kilometer. By foot, you can then follow the hiking trail that leads to Balos beach along the western side of Gramvousa. The total hike is long and strenuous. But you will already find wonderful views and photo opportunities early into the hike. Just take your time to explore, and you'll be rewarded. 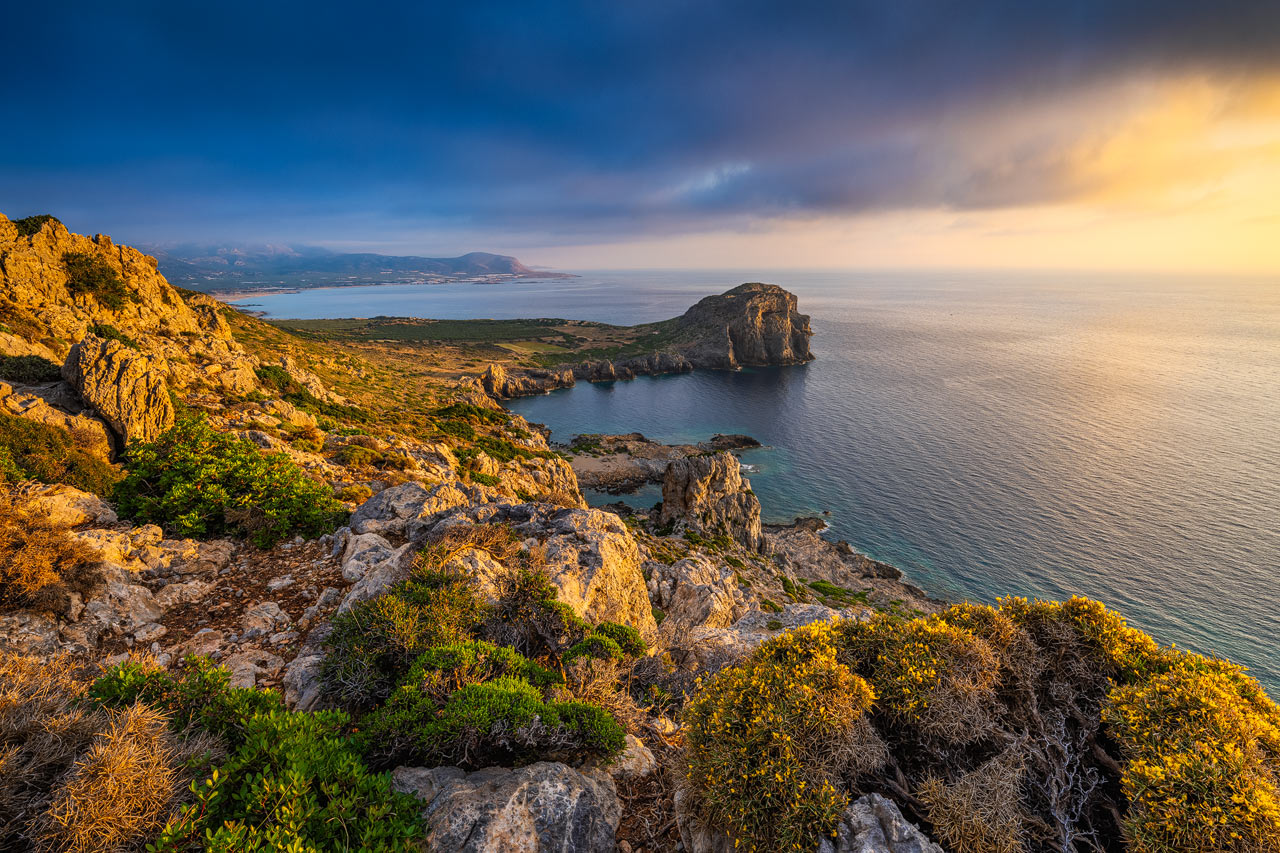 I mention this retreat here because it's encircled by beautiful mountains covered by thick vegetation. No alpine experience is needed to access those, but you should have some path-finding skills because some trails are hidden. Walking sticks might also be helpful to navigate the uneven terrain.

From those mountains, you can spot Kissamos and the Gramvousa Peninsula. I was up there for sunset one evening with spectacular side light. But sunrise should also work photographically. 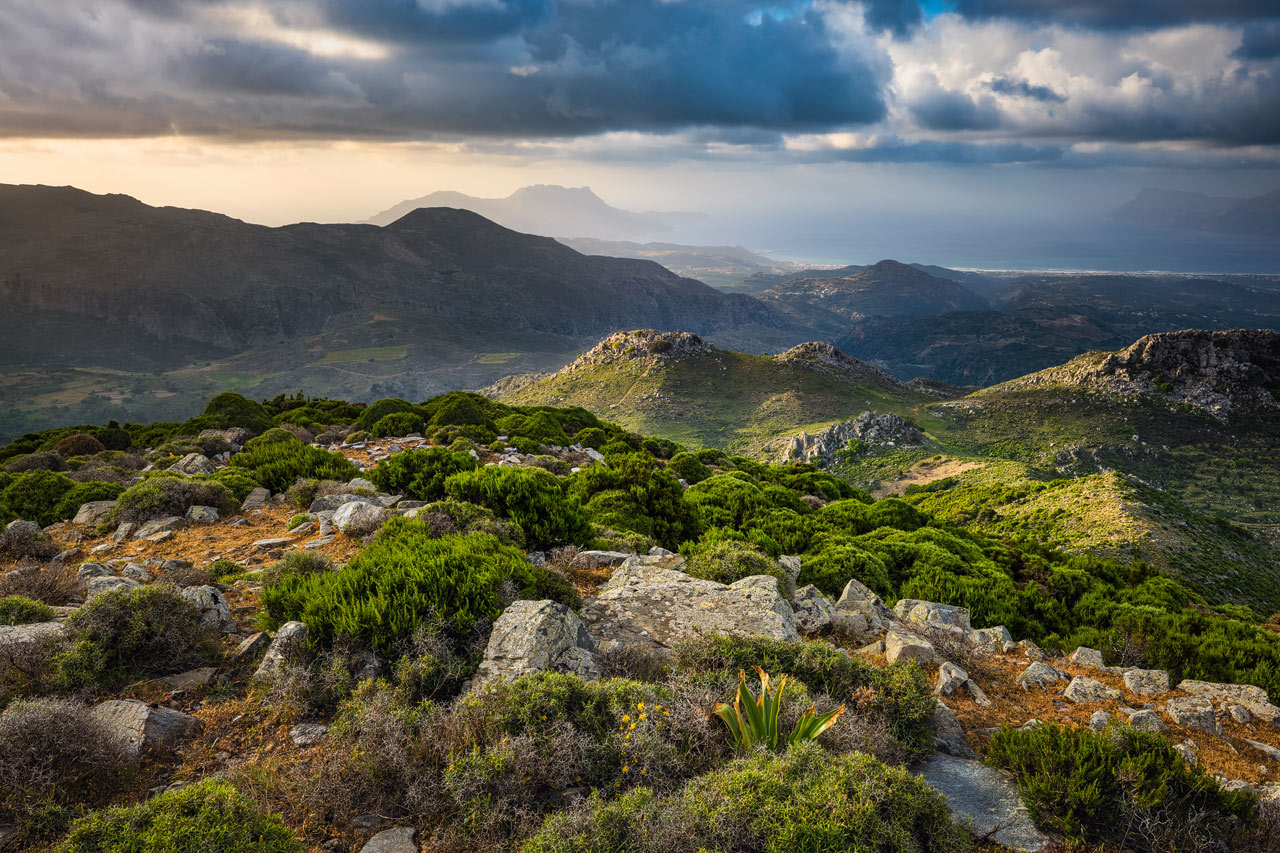 This beach was also on my list of photo locations on Crete because I had seen photos of it that featured pink sand. During a scouting trip, I could see some of it. But it was much less spectacular than in some of the photos I had seen.

The beach is beautiful though, with white sand and crystal clear water. If you visit, walk towards the end of the peninsula. There's a little hill with a lighthouse at its top. The lighthouse itself is not photogenic: it's just some scaffolding with a light on it. But on the way up there you'll find beautiful views. During scouting, I took this photo with my cell phone. 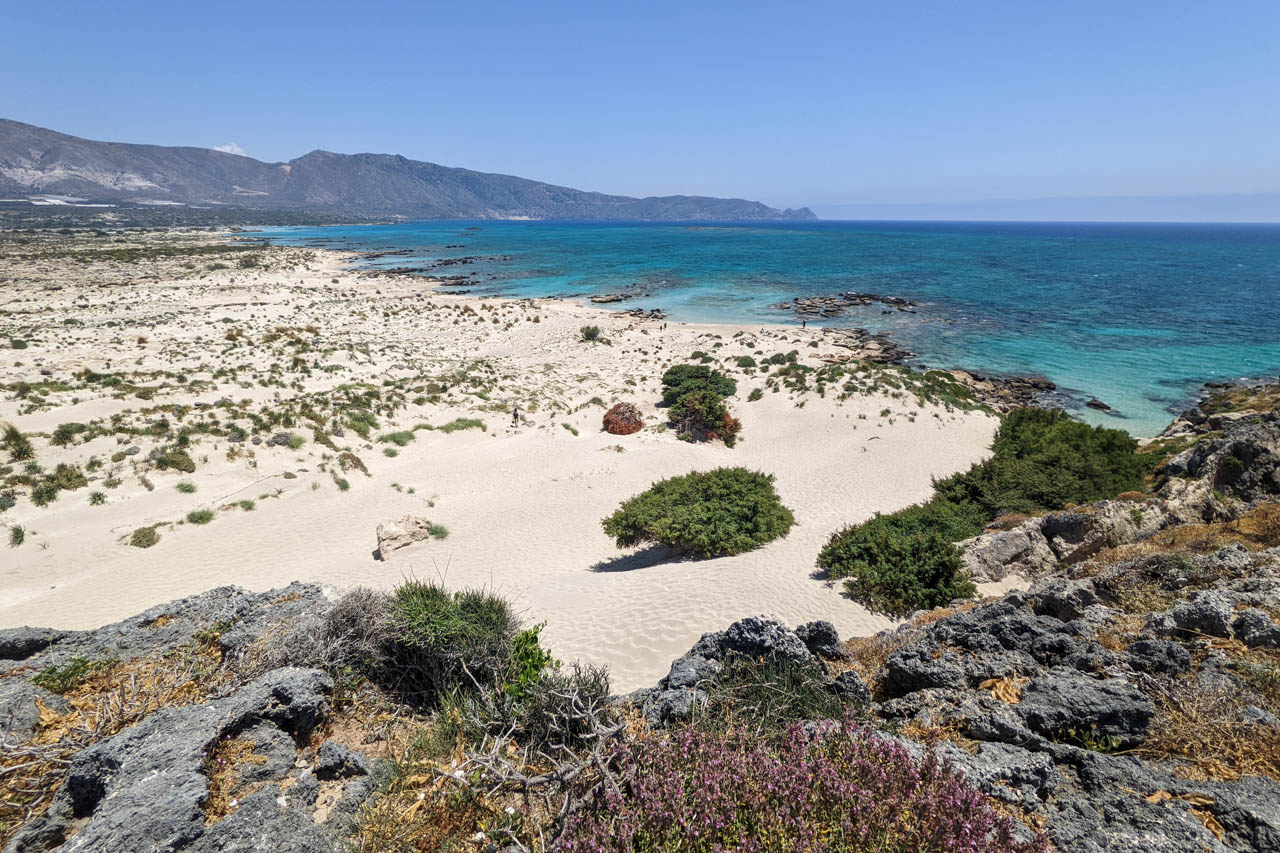 The plan was to return for sunrise one morning. But I didn't get decent enough light to make the one-hour drive worthwhile. I guess I have to return another time of the year when there's a bigger chance for spectacular skies.

Typically, after visiting the west of Crete, I would have continued with the south, which offers some spectacular, rugged coastlines. But since we had planned to spend a week around Gouves, I will focus on this area in the second part of this guide.

So, what's there to photograph close to Gouves and Heraklion, Crete's capital? As I studied the map of Crete, two mountain ranges immediately stood out. There are the mountains around Mount Ida, the highest peak of Crete, and the Dikti mountains. I'm sure both offer great hiking and photo opportunities. But since the Dikti range was closer to our apartment in Gouves, this is where I directed my efforts.

One important thing to note about mountain photography on Crete: you won't find much shade on many trails. That's why the time between late May and September isn't ideal for exploring the mountains. It's dry and hot, and usually, there aren't many clouds that might offer shade. Especially the Dikti range is barren, and the hikes I did were pretty strenuous.

My initial plan was to summit the highest peak, Spathi. From there, I would have had 360° views. But the hike was too long with the high temperatures. So I decided to tackle two of the lower peaks: Selena and Afentis. I went up Selena for sunset, which meant hiking in the afternoon. At that time, the temperatures usually peak on Crete. But the view was rewarding.

If you ever plan to visit, park your car along the road that leads up to the Agios Charalambos church. Unfortunately, you can't go all the way up to the church. The road gets pretty rough for the last kilometer. 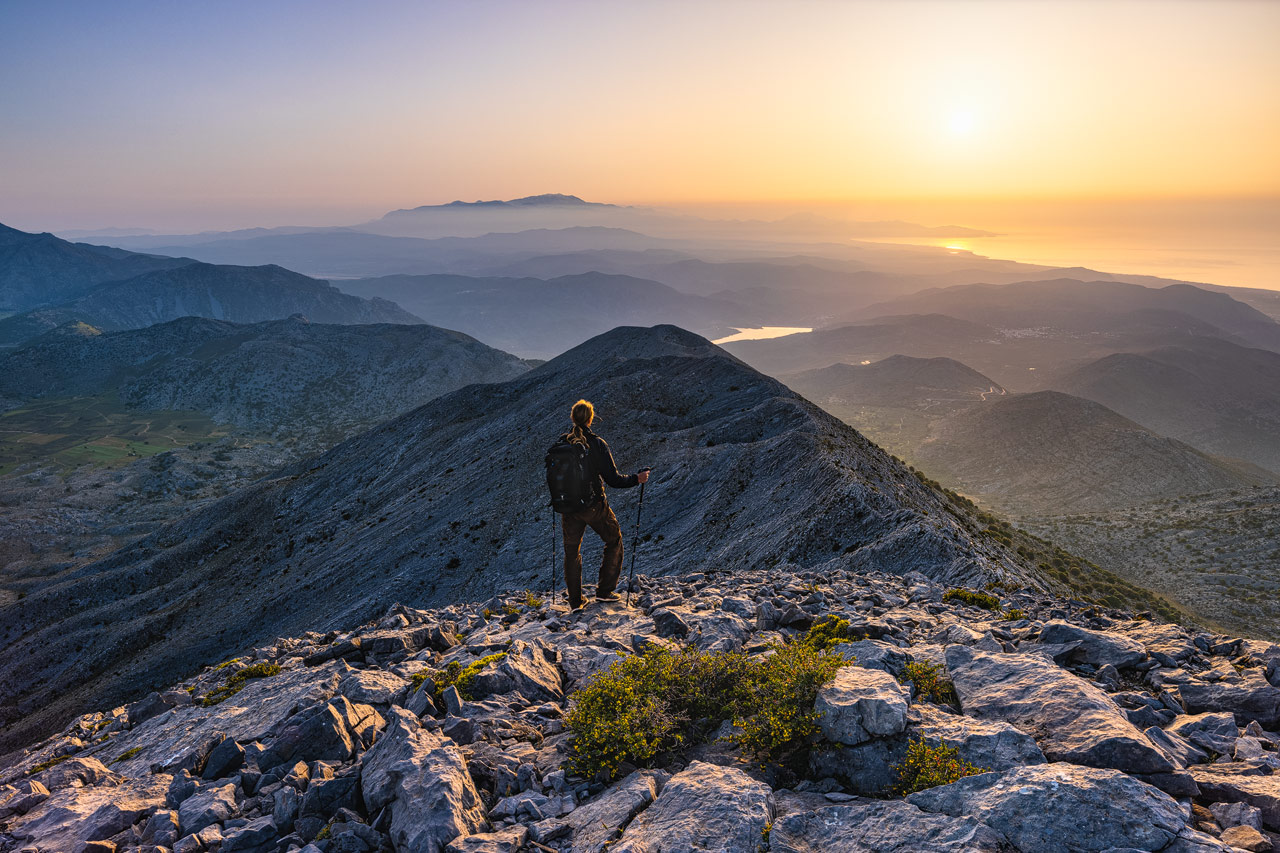 For Afentis, I had a different plan. I wanted to photograph it at sunrise. Since I didn't know the nature of the trail, I first embarked on a trail run up there one afternoon. I only brought my cell phone and two liters of water to travel lightly. During this run, I scouted the peak for possible compositions. Then I waited until our last day on Crete for some clouds. I got up at 2:30 am, drove to the trailhead, and hiked up in the dark. In my opinion, this is the best time to hike up a mountain on Crete in the Summer months. 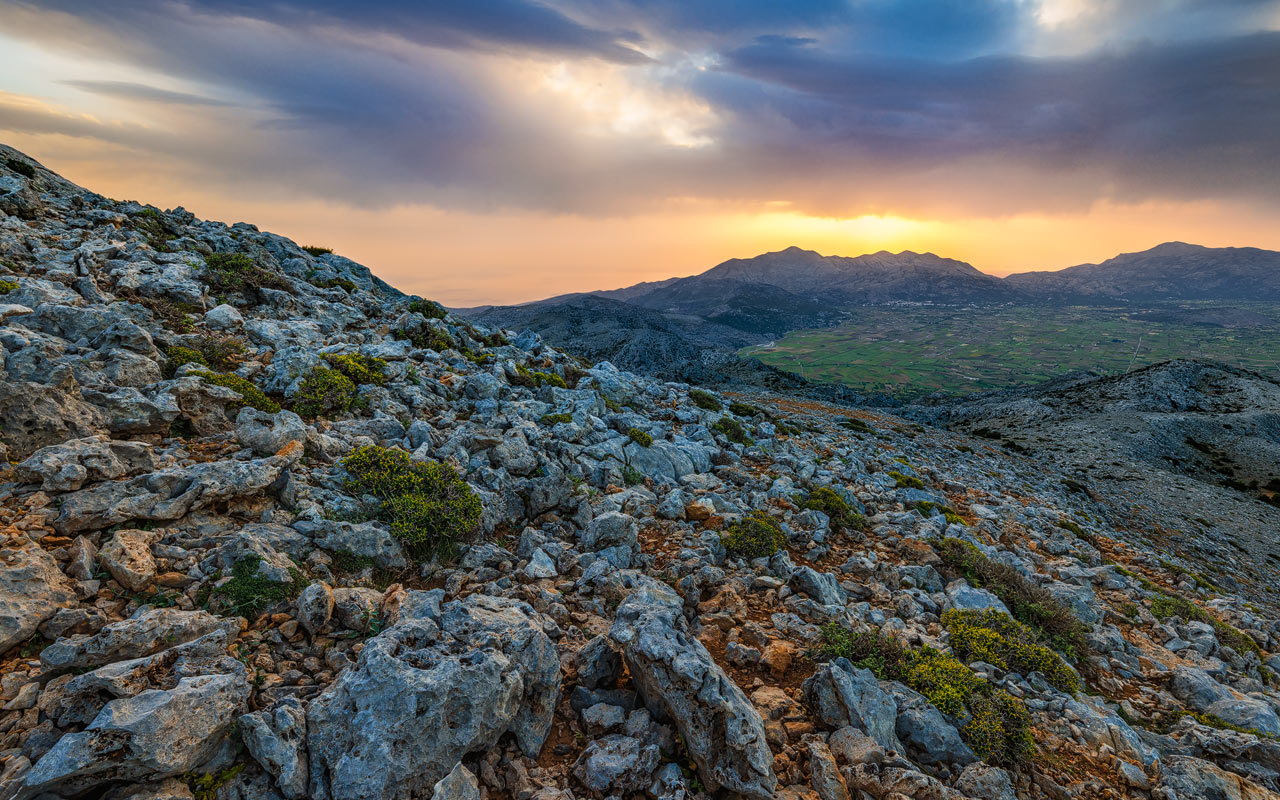 From Plati, a rough, eight-kilometer gravel road leads to the top. In the morning, I needed about 90 minutes to reach the top. If you don't want to push it, plan in two hours. At the top of Afentis you'll find some antennas and a little church. But you'll find the best views towards the east a few 100 meters before reaching the peak. For the photo above, I scrambled down the eastern slopes until I found a good foreground.

As I wrote at the beginning of this article, Crete offers much more photographic potential than what I shared here. Just be open to exploring, as I did. In the end, most of the photos I took were of places I hadn't seen captured before. And that's the exciting part about visiting Crete for landscape photography. There are still so many hidden gems. You only have to venture beyond the places you see featured on Instagram.

I also have to mention the gorges. Crete is full of them, and next time I return, I will spend some time exploring those. Especially the Imbros gorge is high on my list. But some of the smaller ones should also offer good angles for photography.

We visited in May, and while it was already pretty hot, it was still manageable. In many parts of the island, vegetation was lush and green, with many blooming flowers. So Spring is a good time for landscape photography on Crete. Only don't wait until the end of May as we did. There was already too much sunshine and too few clouds.

Because it's hot and dry, I would avoid the Summer months. The landscape will look pretty barren and less photogenic.

The next time I visit Crete will likely be during Autumn. The weather should be more dynamic and offer some rain too. It should bring back some colors to the landscapes.

Based on the photos I've seen from local photographers, I'd say that Winter can also be very photogenic. There are much fewer tourists and many places are deserted. In addition to that, there'll be snow on many of the mountains. It can offer a great backdrop for your landscape photos and opportunities for snow-shoeing.