An hour south of Manuel Antonio National Park via bus or car lies another beautiful national park. The Marino Ballena National Park is located near Uvita and stretches between Playa Hermosa in the north and Playa Pinuela in the south. As the name suggests, it is mostly a marine park that was created as a safe haven for humpback whales as they travel through this area during their yearly migrations. Several tour providers can take you out on the water for whale watching. But this park also offers miles and miles of pristine beaches that are lined by countless palm trees and photographing those beaches was the main reason for my visit. 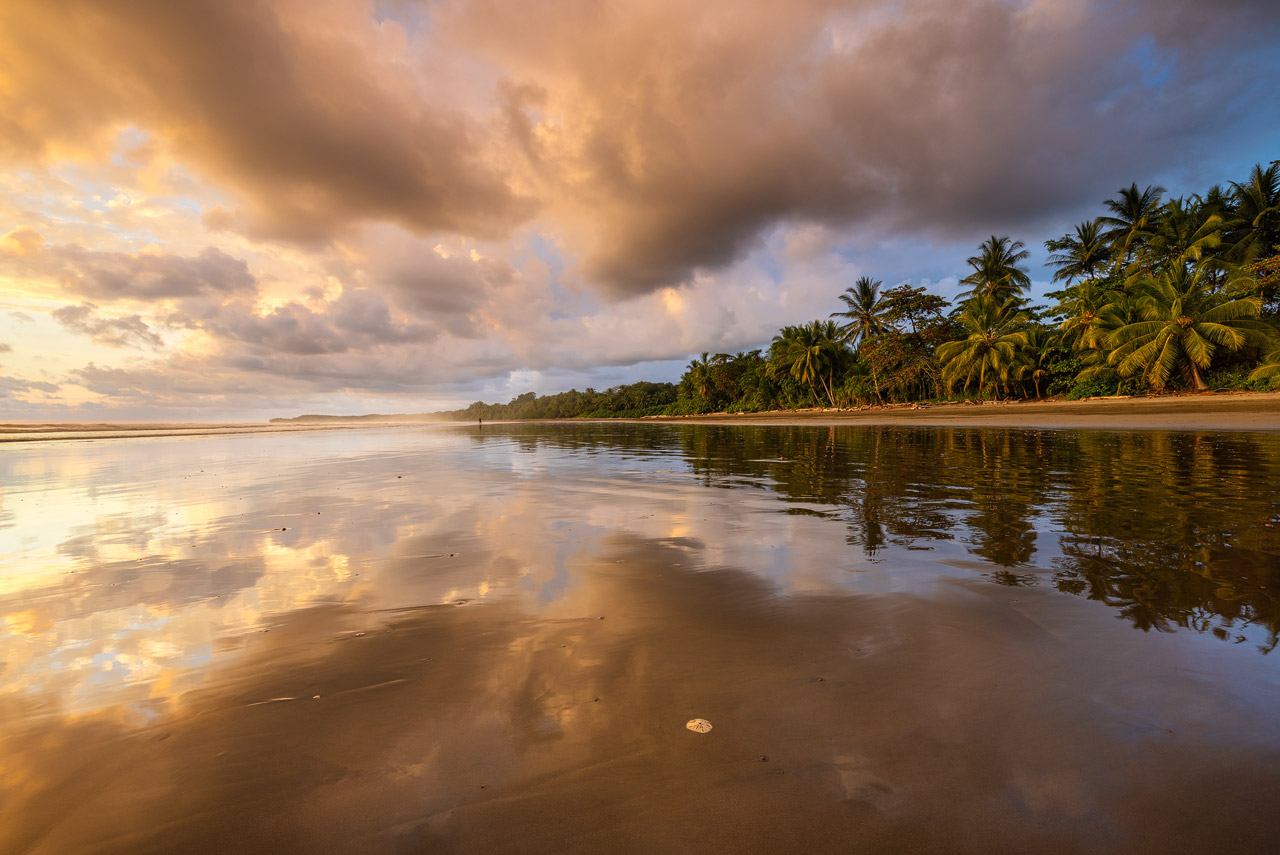 How To Get To Uvita

As I mentioned above, from Quepos you can either go by bus or by car, if you have rented one. Same as for our travels from San Jose to Quepos we again used the Tracopa bus. Make sure to check the schedule on the Tracopa site the day before you go and if you want to be on the safe side, give them a call. Your hotel might help with that. There are not that many buses going between Quepos and Uvita, so make sure to be at the terminal early enough to not miss yours.

We went to catch the bus at 11:30, which was the one going to Sierpe. It was coming from San Jose and was already pretty full. But we all fit in with our luggage safely stored in the luggage compartment. If you go with Tracopa, you will get a ticket for your luggage, which you should not lose. You will only get your luggage back, if you have it.

A bit more than one hour later we arrived at the bus station in Uvita. Our plan was to get a taxi, which never was a problem for us in the past. But it was Sunday and no taxis seemed to operate that day. We contacted our AirBnb to organize a transport, but without luck. After some time we found one taxi, which we shared with another couple, who where also desperate to get to their hotel.

So one big tip here: Get the transport to your accommodation sorted in advance, especially if you arrive on a Sunday. The following days we learned that in general, taxis are rarely available in the Uvita area during high season. There's apparently a lot of work, something that our driver in Quepos already told us for that area. 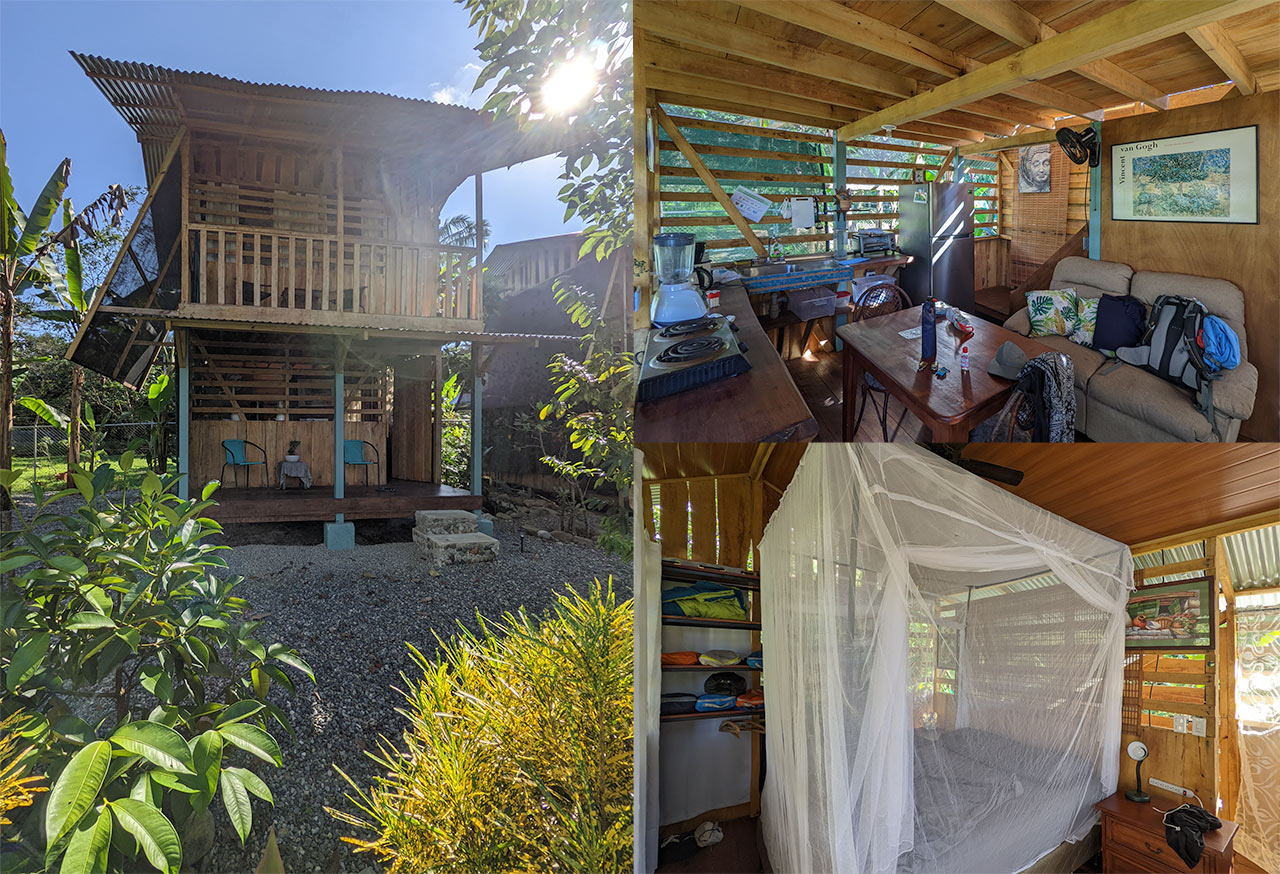 Where To Stay In Uvita

In Uvita we stayed in a beautiful rustic cottage just 300 meters from one of the entrances to the national park. Although this place was more basic than our last accommodation, it was beautiful and perfectly located. A little supermarket was close by, so we could buy some groceries to cook the first evening. For the following days we bought our supplies at the large BM supermarket, which offers a larger selection and better prices.

If you look at the map for Uvita, you'll find that it stretches along Playa Uvita and Playa Colonia. But it also extends a few kilometers inland. If you pick a place I would strongly suggest to get something close to either of those two beaches. This way you avoid to much of an uneventful walk through Uvita or unnecessary parking fees if you drive to the beach in a rental car.

I particularly liked the area near Playa Colonia. It felt a bit less crowded than the Uvita section, which most people visit to walk to its whale-tail shaped sand bank during low tide. To put things into perspective though: When I speak of crowded I feel that this isn't even the right word to use here. Those beaches offer too much space to feel crowded. It's nothing compared to the beaches around Manuel Antonio, which did indeed feel a bit cramped. 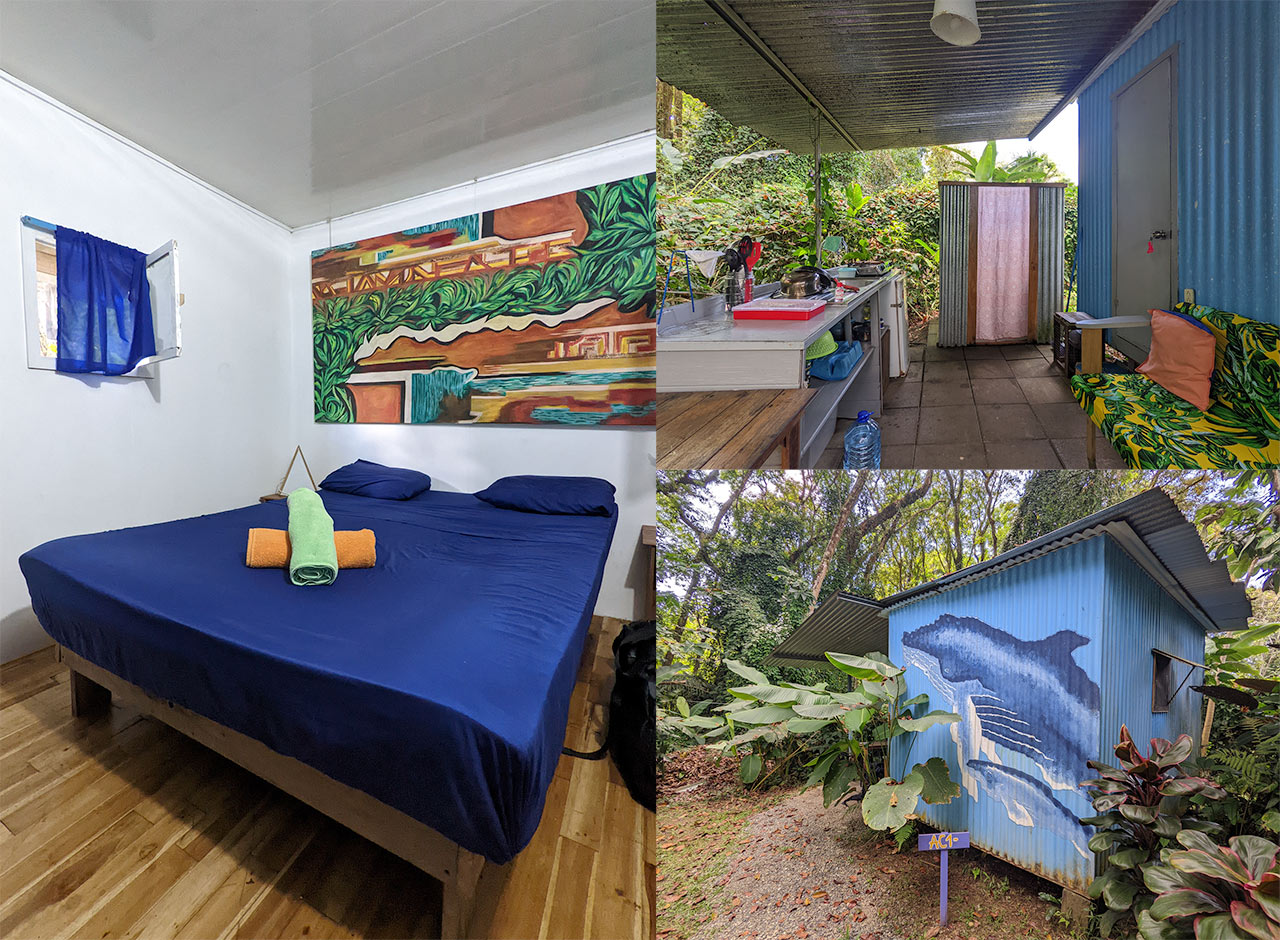 We actually liked Uvita so much that we directly booked another stay a week later, when we would be on our way back up the coast. The rustic cottage was unfortunately already booked, so we tried the Arboura Eco Cabins *. This hotel has a beautiful garden, a pool and some nice A-frame houses with outdoor kitchens. The only free room we got was in one of their containers though and I wouldn't recommend them. It gets quite warm and humid inside and the AC unit makes so much noise that we could not use it at night. I think this place has a lot potential, which could be tapped into with some rennovation.

Eating Out in Uvita

Uvita has many little restaurants, which offer a varied selection of food, including some nice vegetarian or vegan options. As I wrote above, we usually cooked our own meals to stay within our budget. If you eat out, you can plan anywhere between 15 and 30 USD for two persons per meal. And if you have to do it trice a day, this can add up quickly.

As a comparison, although groceries in the supermarket are not cheap either, one week of cooking our own food usually cost us around 100 USD.

There was one place though, which we visited twice. We always like a good pizza and at El Hornito we got exactly that at an affordable price. The pizzas there are huge and sufficient for two people. At 15 USD this is a great option. And if you are looking for a place to have lunch, four days a week the Chirincoco offers some delicious options.

Finally, let's talk about photography. Marino Ballena National Park has some of the most beautiful beaches I have ever seen. Especially at low tide they show their full photographic potential with large areas of the beach becoming a mirror for its surroundings. There are also several river mouths along the beach, which offer foreground interest.

One evening I went to the river mouth at the eastern end of the beach near Colonia entrance to photograph this rather wild section of the beach. As the sun set in the west, the palm trees and the sand glowed in warm, orange tones against a dark and moody sky. I also tried to photograph this scene at sunrise, but the mountains in the east are cloud magnets and those usually block the sun in the morning. 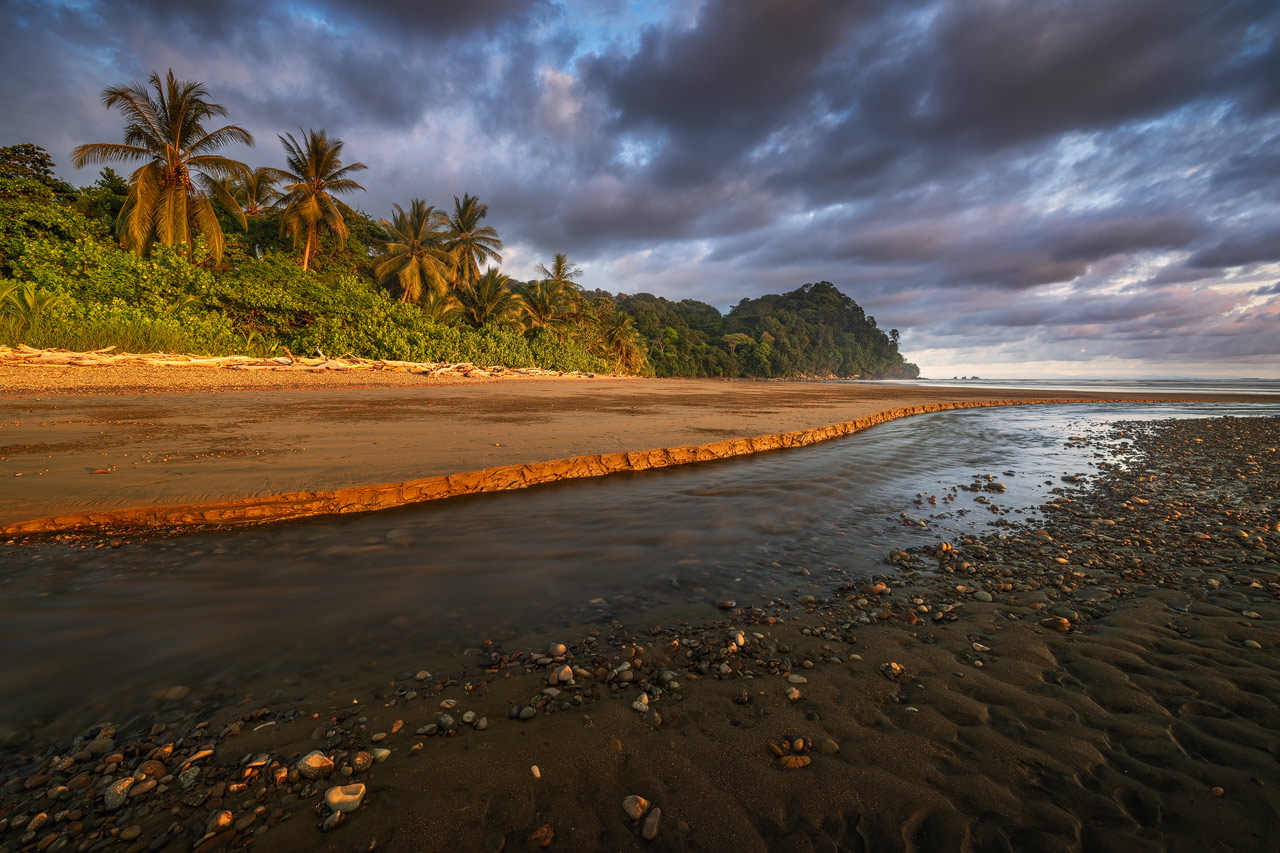 So my advice for photographing the Uvita beaches is to do so around sunset at low tide. It's just magical. Also be aware that those beaches are part of the national park and you have to pay an entrance fee of 6 USD plus tax for each day you visit. The good thing is the opening hours are favorable for landscape photography. In the evening the park opens till 6pm and, if you buy a ticket for the next day already the day before, you can enter the park for sunrise at 6am.

In the video below I take you behind the scenes of me taking the photo above and I give additional tips about seascape photography in Uvita.

Next to its wonderful beaches, Uvita also has a waterfall, which I went to photograph during my second visit to the area. The Cascada Verde waterfall – often just called Catarata Uvita – is located a bit inland. From the Arboura cabins it was a four kilometer walk. There are places where you can rent a bike, but with my heavy backpack I usually prefer walking.

I went to the waterfall early in the morning. Due to Google it opens at 8am, but when I arrived I saw a sign that was saying 7am. And I would definitely recommend to go there in the morning. First of all the light is nice and soft at that time and the waterfall still in shade. Second of all and maybe more important, you'll have this gem for yourself. Friends of us visited a few weeks earlier around noon and it was crowded with people. That's to be expected because this waterfall is advertised as a place to swim, to jump from rocks and have fun.

I spent more than one hour photographing the waterfall and the emerald pool from various angles in complete solitude. The 2000 colónes entrance fee were definitely a good investment. 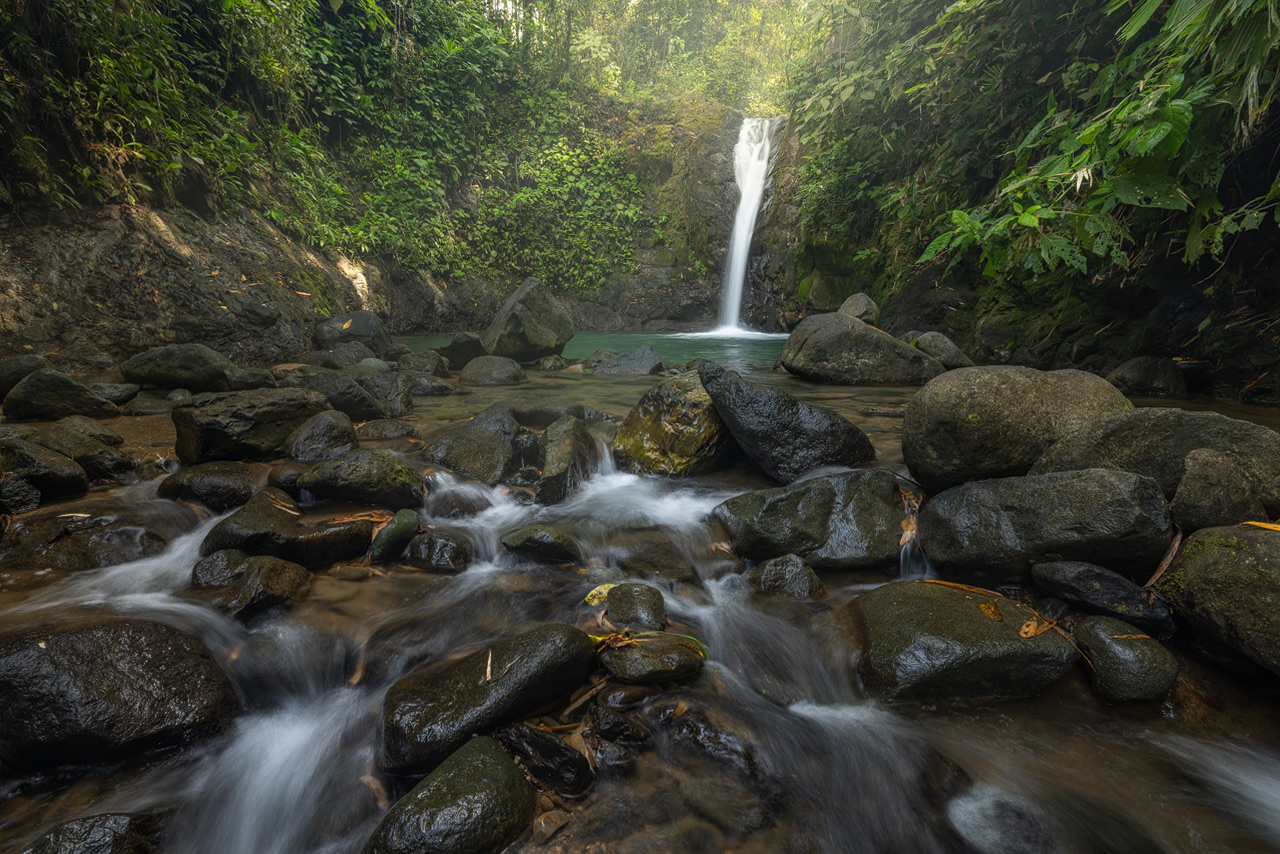