At the end of 2021 we had spent six weeks exploring the dramatic coastline of Portugal. Beginning of 2022 it was time for a more exotic adventure. On January 4th we embarked on our journey to Costa Rica, where we planned to stay a full 10 weeks. For such a small country 10 weeks might sound a bit excessive, but Costa Rica has a lot to offer. It has one of the highest biodiversities in the world, it's covered by thick cloud and rain forests, boasts endless miles of picturesque beaches, and is home to a great number of volcanoes. Our first stop on our tour was Manuel Antonio National Park, which is famous for its wildlife. 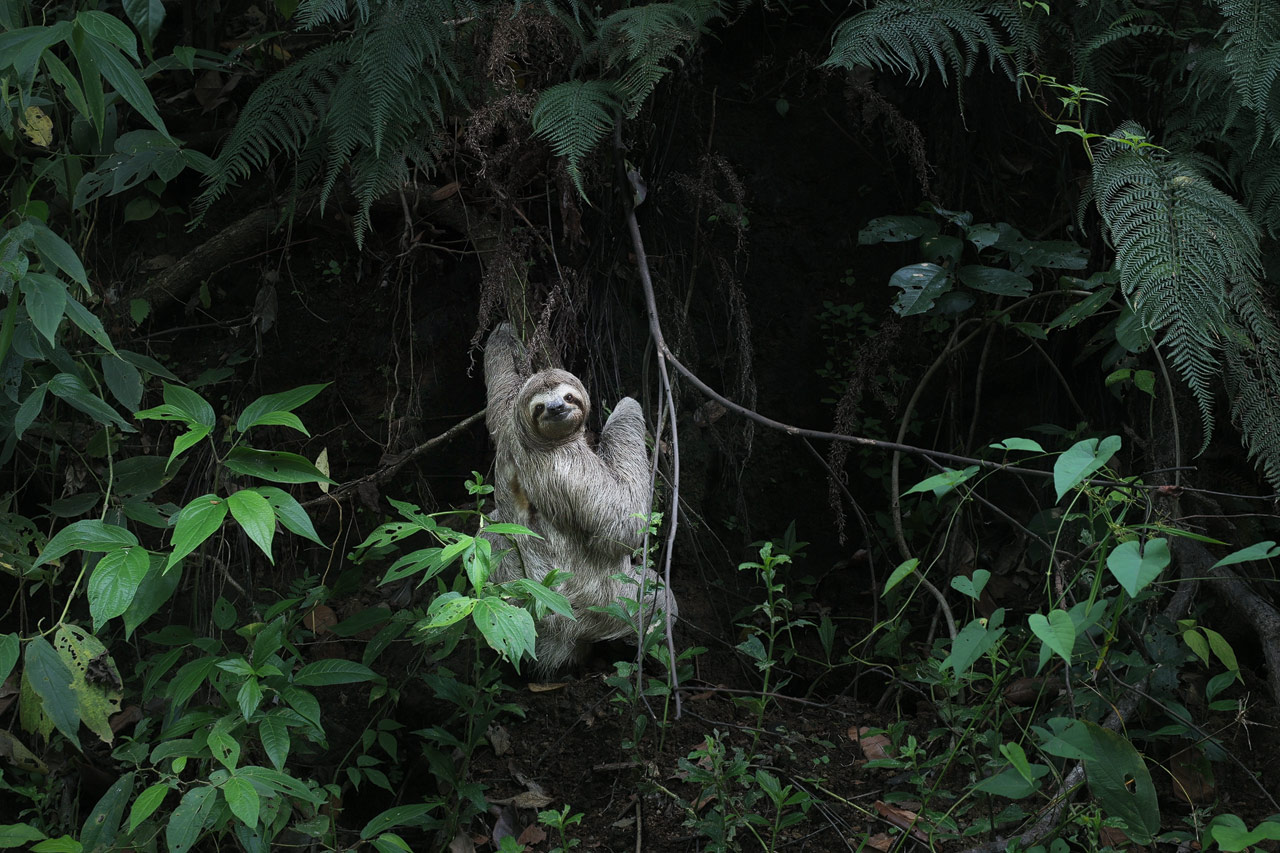 Getting to Manuel Antonio National Park

Because we were visiting Costa Rica during high season, renting a car for 10 weeks was financially not possible. For Costa Rica it's advised to rent a 4×4 vehicle and costs per day for such a car start between 70 and 80 USD, if you want to get insurance and reduce the deterrent fee to a reasonable amount.

During rainy season, from May to November, you can get a much better deal. When I first researched car prices back in November, those where starting in the 50 USD region. But in December the prices increased a lot and it didn't really matter how much time in advance we tried to book. January, February and March were equally expensive.

So we made the decision to split our itinerary for Costa Rica into three parts: First we would visit the beaches along the pacific coast by bus, then rent a car for three weeks and explore the volcanoes and forests north of San Jose, and finally travel along the Caribbean coast, again by bus.

As it turned out, getting to Manuel Antonio National Park by bus is very easy and convenient. From the Tracopa Terminal in San Jose it's a 3,5 hour ride, if you take the directo. Make sure to not use the regular bus, which is more of a collectivo option that has more stops and takes longer. The price for the directo to Quepos, which is the town next to Manuel Antonio, was 8 USD per person.

As a little side note I want to mention that to get to Manuel Antonio and further South to Dominical, Uvita and Sierpe you don't need a 4×4. The paved road that leads South is in good condition. A 4×4 might be necessary though for the little detours that are often required to get to the interesting places. That's also why, if you rent a car, you should get a 4×4, because the real advantage of a car in Costa Rica starts when you use it to go to those places. 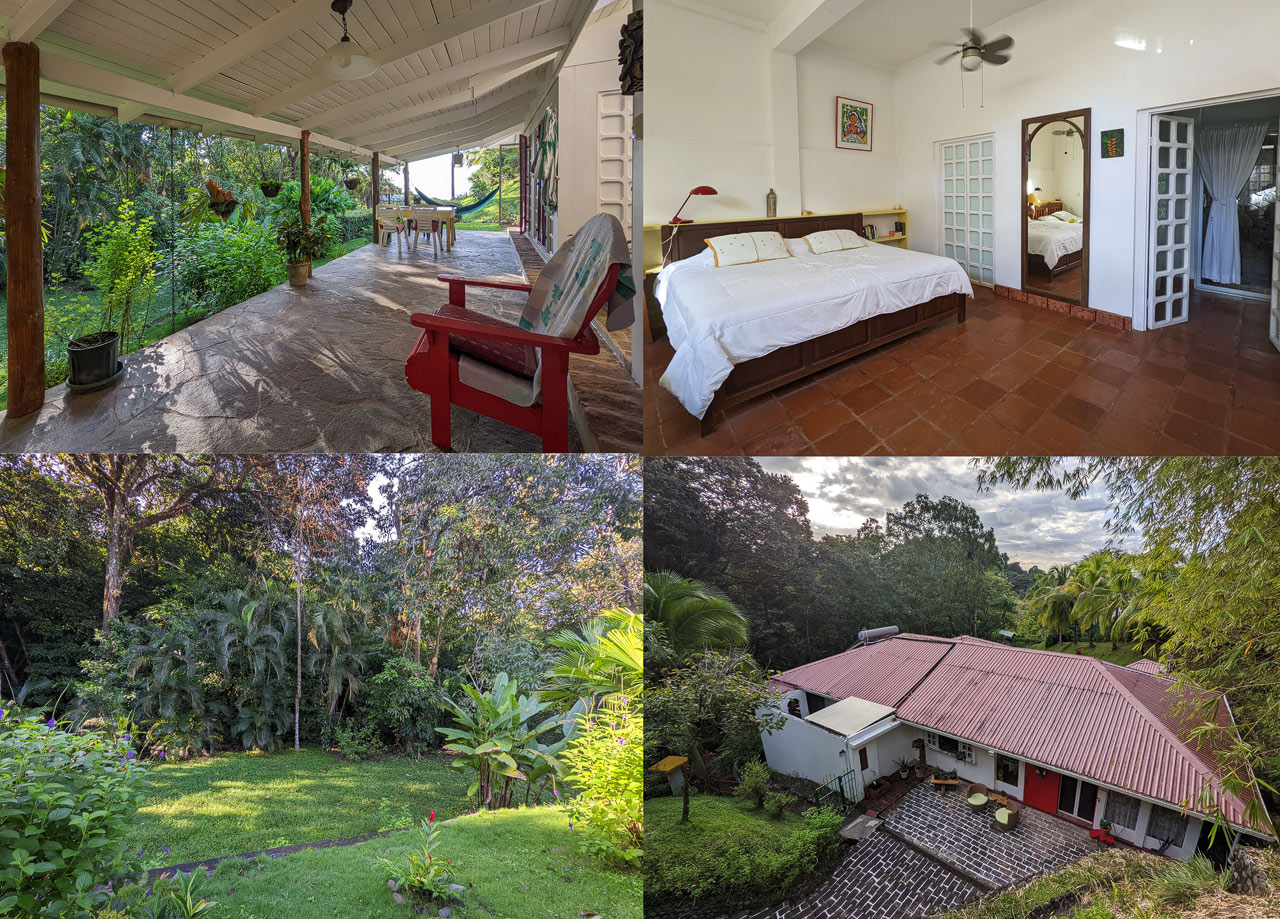 Even without a car we were quite flexible in the Manuel Antonio area because between Quepos and Manuel Antonio there's a regular bus that costs roughly a dollar per ride. From sunrise to sunset it goes every 15 – 30 minutes and afterwards on an hourly basis until midnight.

This was perfect, because we had selected the wonderful Karibu apartment as our accommodation. Quepos and Manuel Antonio are very crowded areas with many hotels next to each other. We wanted to have more quiet and the Karibu offered that. It was an oasis of relaxation and we just had to sit on the porch to see monkeys, agoutis, aras, hummingbirds, iguanas and some other types of birds, which I cannot put a name on. In the video below you see some footage I captured during our first breakfast.

From the apartment we usually walked the 600 meters to the main road to catch the bus towards Playa Espandilla. This is also where the entrance to the Manuel Antonio National Park is located. 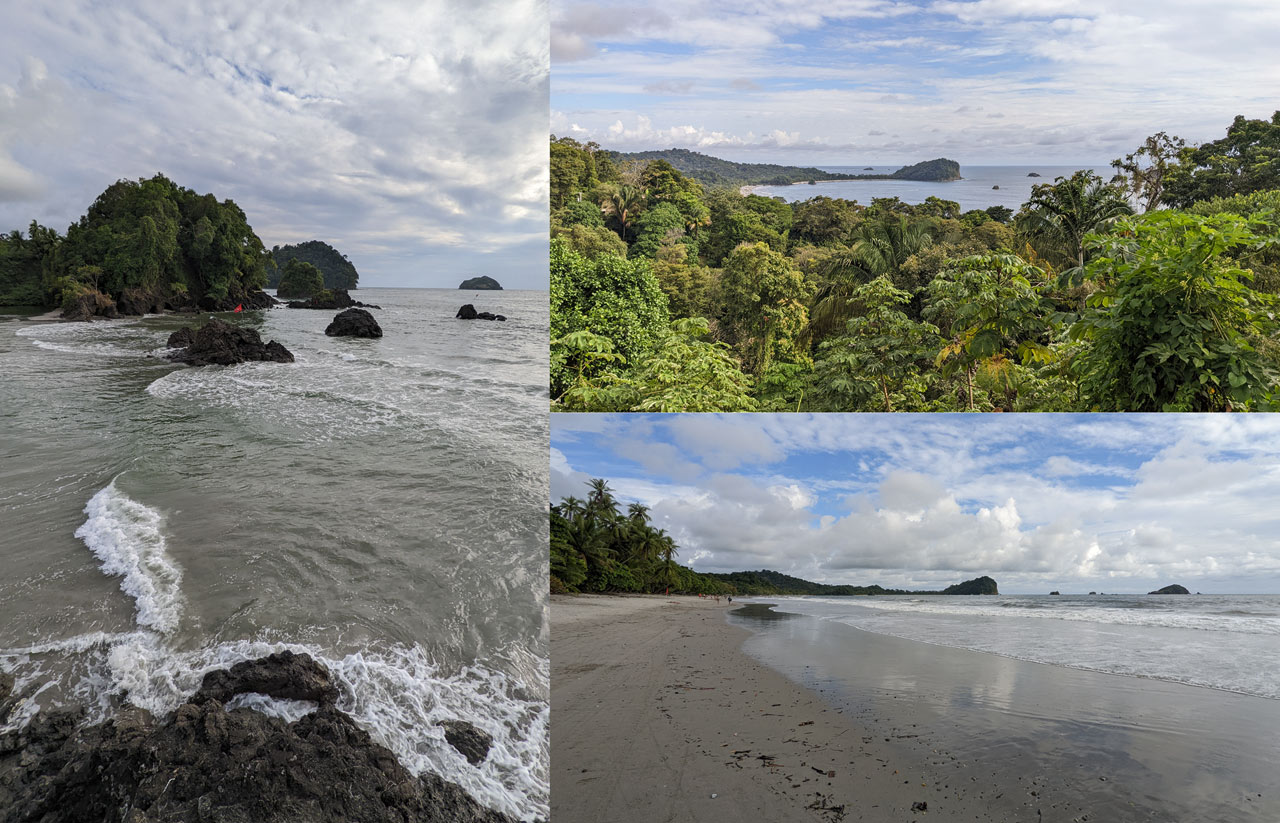 Beaches in The Area

Playa Espandilla is a long beach right next to Manuel Antonio. It's beautiful, but also crowded. When we visited, we did so from its northern entrance. From the bus stop near SuperMarket Pura Vida we first walked down to Playa Biesanz, which was a bit disappointing. At least there was a beach thanks to low tide, but it was neither photogenic nor was the water inviting. It had a bit of a murky feel to it.

So we quickly left and walked back up towards the main road for a few 100 meters, before heading down the Playitas Road. This is when we encountered a sloth making its way across the street. Witnessing this laborous crossing was the highlight of our four days in Manuel Antonio and I'm glad I captured it in video.

Once it had vanished into the trees again we continued down to Playa Espandilla Norte. This place was beautiful, not too crowded and with some nice surf. Here the water actually felt like the ocean, other than at Biesanz. It was still low tide so we could walk down the beach towards its southern part. This is were it got much more crowded and this is also where we encountered some very cheeky monkeys. Unfortunately people keep feeding them, which is why they now get very demanding and even try to steal food, if you are not careful. But, if you want to see monkeys, this is the place to go.

Some other beaches close to our apartment were Playa La Vaca, which had a similar feel to Biesanz, except there were no people. But it's not a photo spot in my opinion. Then there are Playa Tulemar, which as far as I know belongs to a resort and is not open to public, and Playa La Macha. The latter involves a bit of a hike and I originally wanted to photograph it. But high tide unfortunately coincided with sunset the days we were in the area and so it was not an option.

All we had heard of Manuel Antonio National Park prior to our visit was that it's crowded but worth it, because of all the wildlife one can see. Both expectations weren't met, which was positive and disappointing. Positive because it really wasn't that crowded when we went. We had reserved our tickets, which cost 16 USD per person, for 8am and when we arrived at the entrance we didn't have to wait more than 5 minutes until we were inside of the park. Also, I wonder how it can get as crowded as in the stories I've heard when they only sell 300 tickets per day and when buying those tickets online in advance is a requirement. Even at the beaches there's so much space that 300 people at once would not be a problem.

So that was the positive part. The disappointment was the wildlife, which didn't life up to the hype. If you are not an expert spotter then you won't see more wildlife than outside of the park. At least that was my impression. Even the guided tours, whose path we crossed a couple of times, didn't seem like they saw that many animals. At least after some time we saw the capuchin monkeys as they stole some snacks from one of the visitors – mind that bringing snacks into the park is not allowed. We saw a sloth way up in the trees and the highlight, we saw coatis climbing down from a tree right in front of us.

So it wasn't a bad experience after all. We just had too high expectations because of all we had read and heard about the park. If we would have gone into the park without those and also, if we hadn't already seen so much wildlife on the porch of our apartment, I think it would have been ok. It could also have been bad timing and on other days there's more wildlife to be seen.

In case you are thinking about visiting, I don't want to discourage you. Make your own experiences, but go in there with realisic expectations. I am aware that seeing a sloth crossing the street is not something you see on a daily basis even in Costa Rica and it should not be the bar against which all other experiences are measured.