After two weeks in France our travels were sadly coming to an end. But we didn't want to leave the coast without visiting one of France's most famous monuments – Mont Saint-Michel. Photographing this beautiful fortification that sits on a tidal island just off the coast of La Gréve had been a dream of mine for a long time.

In order to photograph Mont Saint-Michel I had to find a campsite that was close enough to the island that I could walk there for sunset and sunrise. In the nearby towns there are quite a few campsites, but those are too far and you usually have to take the bus that connects those towns to the island throughout the day. This is a good option for a casual sightseeing visit, but not for photography.

It's also important to mention that the road leading to Mont Saint-Michel is closed by a gate and only if you have a reservation in one of the hotels behind that gate, you can enter. There is actually also a campsite behind the gate and if you reserve a pitch there, you also get a code to enter. And this is what we did.

The campsite wasn't even more expensive than the other campsites we had stayed at so far, the pitches were large, the toilets clean. And the best thing: We could walk to Mont Saint-Michel in about 30 minutes. For one night we payed 22 Euro for the campsite and another 8 Euro for a night behind the gate. 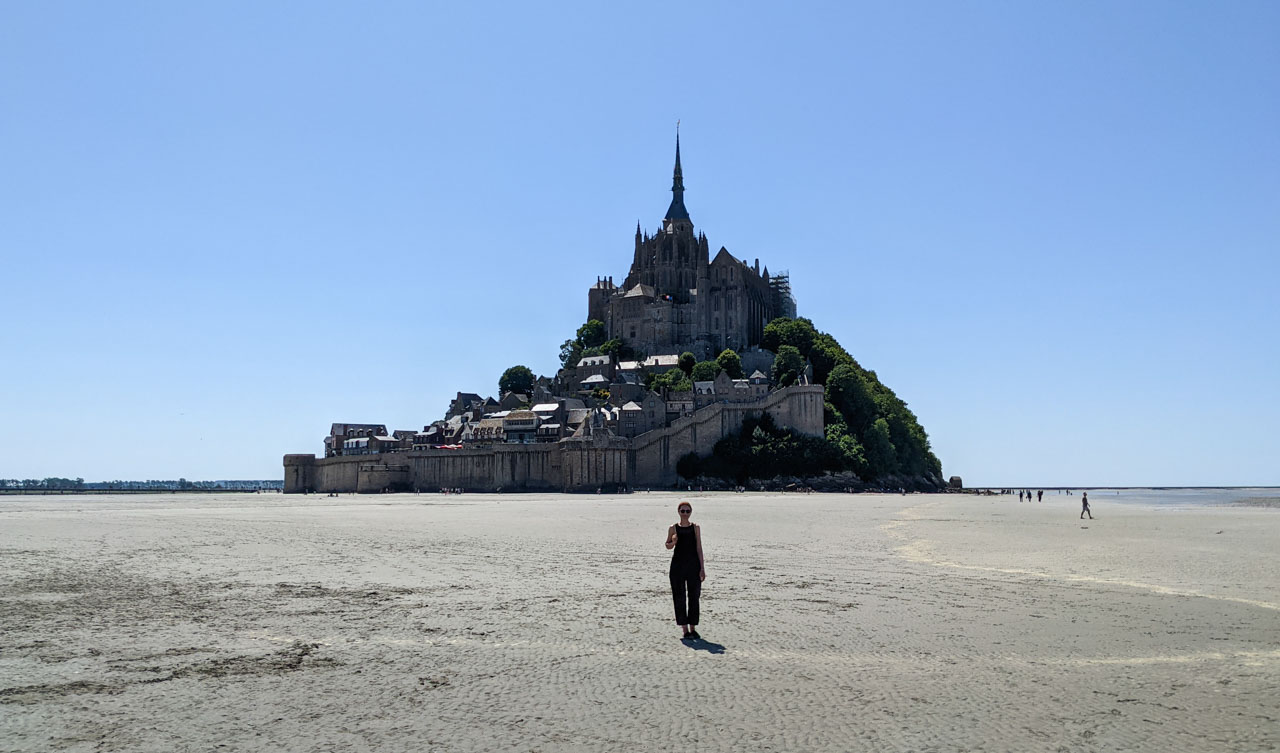 With the sun burning from the sky we went to explore the island of Mont Saint-Michel soon after we arrived at the campsite. In times of Covid it was nice to be able to just walk there instead of going in one of the crowded busses. And although on and around the island itself there were many people, it was still an experience to explore the narrow alleys and the abbey on top of Mont Saint-Michel.

Entering the island is free, but the real interesting part, the Abbaye du Mont Saint Michel, requires and entrance fee of 10 Euro for adults. If you ask me, this is money well spent. It's just fascinating to walk through the various rooms and buildings that make up the top of the island. Despite having been around for many centuries they are still in a well maintained state.

This also makes them interesting for architecture photography. With modern cameras like the Canon R5*, which has excellent image stabilization, I was able to take some bracketed exposures of the dark interior. 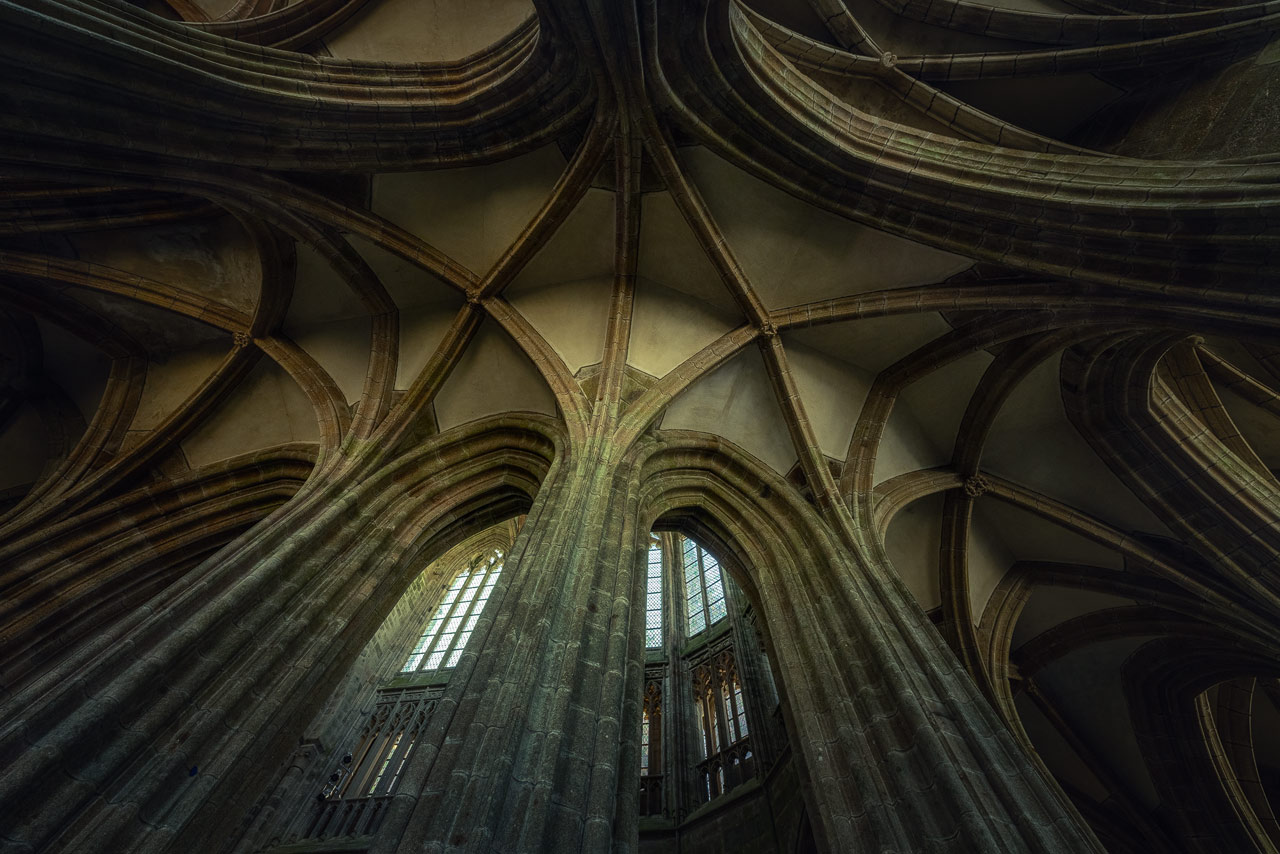 What I also wanted to photograph was the island itself. And without any clouds in the sky I started contemplating a photo of the Milky Way behind the island. Checking the tides I knew that I would be able to get into position in the mudflats surrounding Mont Saint-Michel at 4am in the morning.

When I did some scouting in the afternoon with similar water levels I even found some interesting foregrounds in the mud. The sun had hardened its surface and it was easy to walk on top of it. But areas that hadn't completely dried still had me sink in quite a bit. I figured that in the middle of the night, despite the water receding, taking a photo in the mudflats could become quite a muddy business.

So instead I tried to find a good subject to photograph for sunset. With a clear sky it's essential to find a foreground that is not overloaded with forms and details. I always look for flat foregrounds to complement a clear sky and while walking through the meadows near the island I found exactly what I was looking for.

There are a few trenches cutting through those meadows and with google maps I could precisely locate them. Already the first trench I found contained beautiful patterns in the drying mud. Those provided just enough detail to make the foreground interesting, while not destroying the balance with the sky. 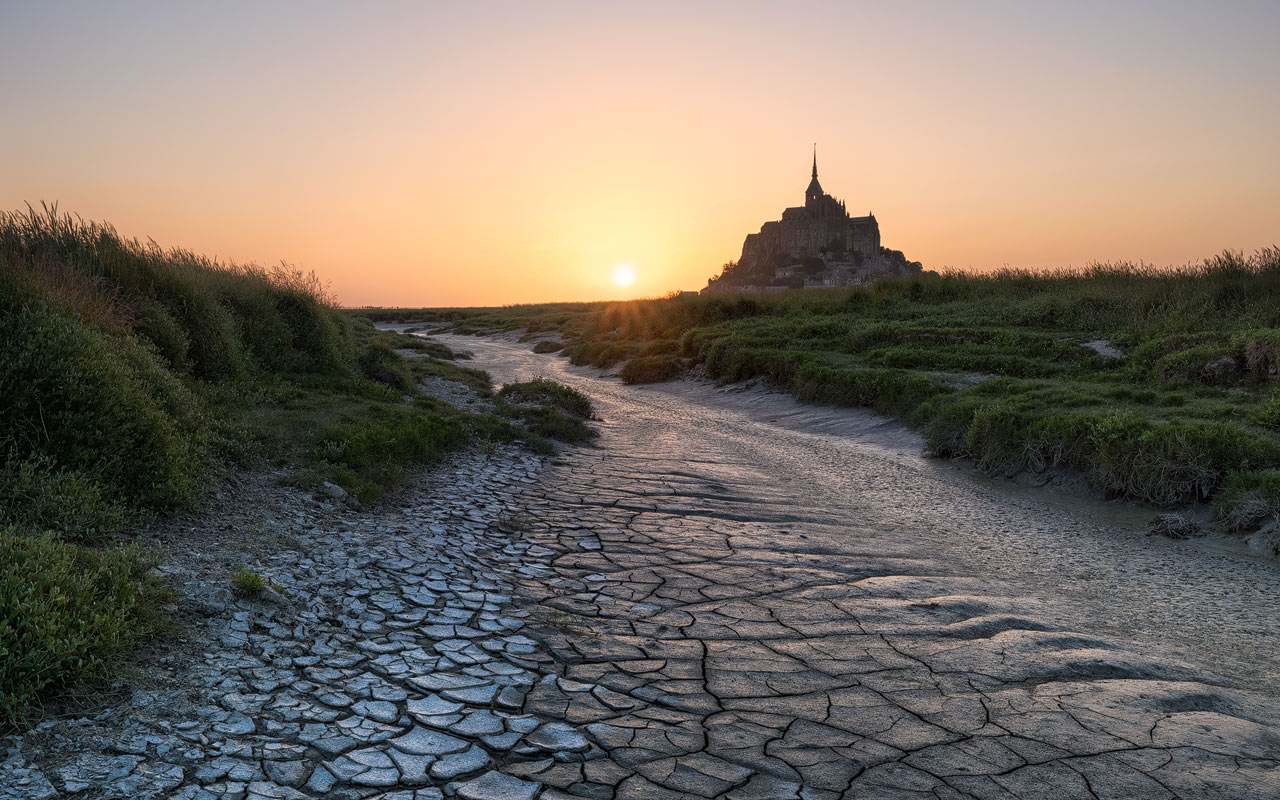 This photo marks the end of our journey through France. The next two days were spent on the road back to Germany, which driving a campervan was quite tiring.

Now, if you got inspired to also visit France for some sightseeing and photography, I want to leave you with two final tips: Using the toll roads is not really worth it when driving a slow vehicle like a campervan. Driving on those is expensive and doesn't save you that much time in the end. Also, make sure to adhere to the speed limits. France is covered by a myriad of speed cameras and just exceeding the speed limit by 1km/h costs 45 Euro. I was caught twice.