Sacred valley of the Incas

After our trouble with Cruz del Sur and an 18 hour bus ride through the mountains we were glad to arrive in Cusco, although it wasn’t our final destination for the day yet.

Cusco lies at around 3500 meters elevation and the air contained much less oxygen than we were used to. Everything was a bit more strenous. Walking on even ground, for example, felt like going uphill and going uphill quickly got us out of breath.

I’m a fit person but the thing with high altitude is that it doesn’t matter much, if you are fit or not, neither does it matter how old you are. Some people just react to it more heavily than others.

We didn’t want to take chances and probably loose a day or two because we weren’t acclimatized yet. So we had planned to first visit Ollantaytambo and from there go to Machu Picchu – both lie below 3000 meters – before returning to Cusco. For us this proofed to be a very smooth way to get used to high altitude.

After a quick Coca tea we continued our journey to Ollantaytambo. As we arrived we immediately knew that the one day we had left would be too short to explore this wonderful little town with its narrow cobbled streets, little restaurants, and with the fascinating Inca ruins adjacent to it.

The town itself is actually built on an ancient Inca city and its layout closely follows the geometry the Incas used for their city. Many of the new houses use parts of the ruins as base and it’s interesting to see how perfect those huge rocks fit upon each other. Quite a contrast to the new structures.

Since we had only the afternoon left, we decided to visit the ruins east of the city, which were still bathed in sunlight. There’s a much larger complex west of town, but it was already in shade and thus not suitable for a sunset shoot. At least I was hoping to photograph sunset once we had climbed up the track towards the first viewpoint. 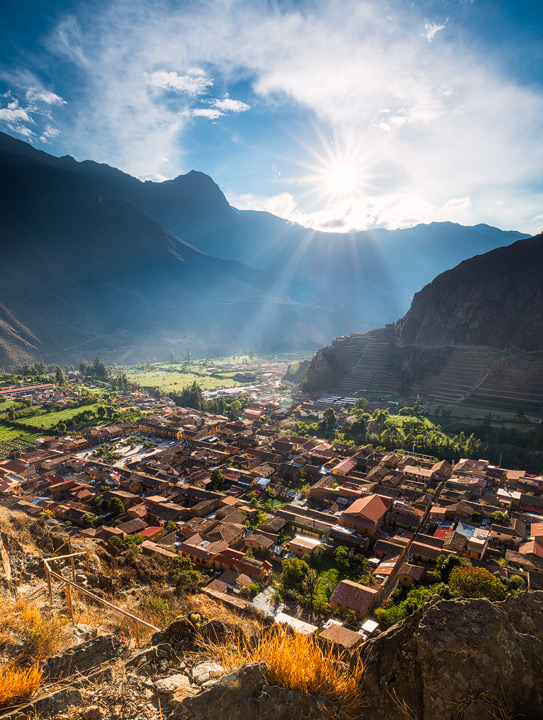 But as I started setting up my camera a guard came up and told us that he would close the entrance at 4 pm and we had to start our descent now. What a bummer. With the light just getting a sweet golden tint, I had to walk back down towards the gate instead of taking my time to refine my composition.

Along the way though I made one quick stop and was able to snap a photo before the guard hurried us on again.

The next day we took the early train to Aguas Calientes. There we had booked a hotel for one night to be able to visit Machu Picchu twice, once in the afternoon and the next day early in the morning.

I had already bought the entrance tickets for the ruins through the ministry of culture homepage – this guide was a great help in the process.

So as we arrived in Aguas Calientes we didn’t waste much time and directly made our way to the bus stop. To get to the ruins it’s possible to either take one of the many buses or simply hike up the mountain.

Normally I don’t mind a good hike but with the limited time we had the bus was the better option. The ride took around 20 minutes and the views along the way were already spectacular. But they were nothing compared to the view after we entered the ruins. If only there had not been thousands of other people. I had read that 2500 people are allowed into the ruins per day and thought, considering the massive size of the complex, those would spread out a bit.

But that was not the case. Walking through the ruins around 1 or 2 pm was nearly impossible. Countless travel groups were moving through the narrow passages with their guides and often there was no way to get past them. This made scouting and getting to the viewpoints a little harder, but in the end I managed to find a nice vantage point. 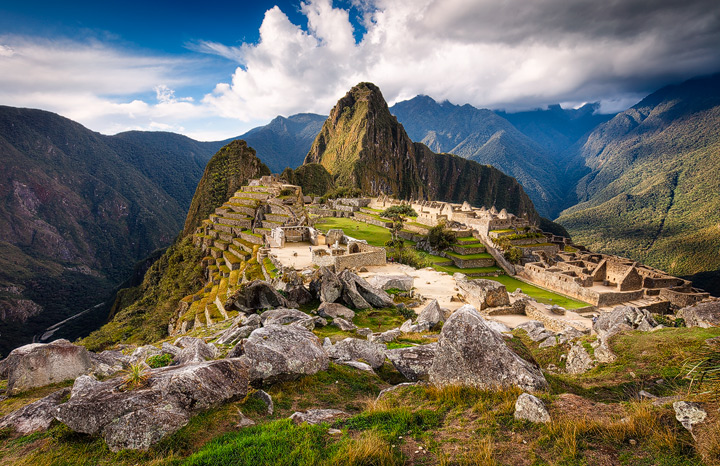 Carefully I setup my tripod, always having one eye on the guards close by. I had read reports by some other photographers, who weren’t allowed to use a tripod in the ruins or who needed a special permit. But I had no such problems. For nearly one hour I left my tripod in place and took around 40 photos to be able to later remove all people from the final image.

While enjoying the view I also noticed that between 3 and 4 pm the number of visitors decreased significantly. Finally a bit of silence set in and the hustle of the hours before subsided. 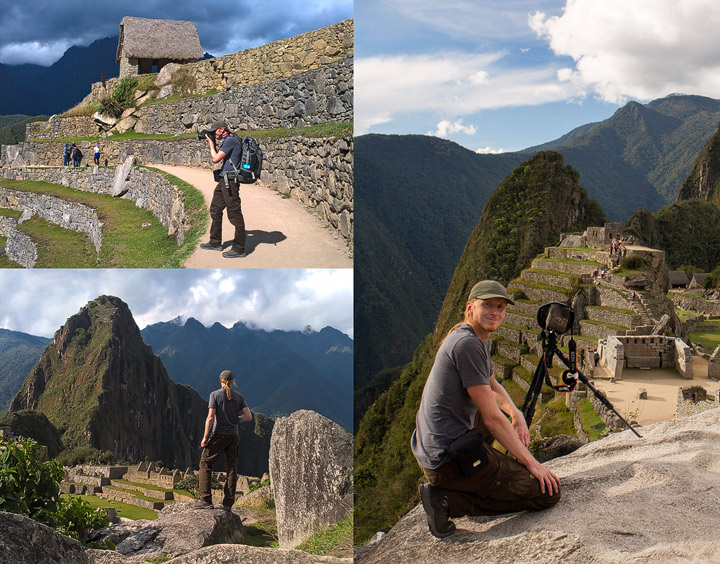 That’s me scouting the ruins for compositions

With one image taken we went back down to Aguas Calientes to find something to eat. There are numerous restaurants, which offer everything from Pizza over pasta to burgers and more. You’ll be hard pressed to find a restaurant specialized in one cuisine. Also as with many places we ate at in Peru, the food wasn’t very good. But maybe we just ate the wrong dishes.

Once back in the hotel we first had to hunt down some mosquitos. Something I hadn’t read about before was the fact that in Aguas Calientes and especially in Machu Picchu you encounter swarms of those nasty little insects. If you are unprepared, you’ll end up looking like a streusel cake. I definitely got my share of bites in the two days we spent there. So, if you plan to visit, make sure to bring some proper insect repellent.

hundreds of people waiting for the busses to the ruins

The weather forecast for the next day was miserable – rain until noon. I had set the alarm to 4 am but after looking out of the window we decided to head to the bus station a little later than planned, at 5am. I had expected a queue, but definitly not that many people. It was pouring after all and normally it’s mostly photographers who are crazy enough to head out in such weather.

We ended up waiting for half an hour until it was our turn to board one of the busses. But it didn’t matter anyway because the rain didn’t stop for sunrise. Neither did it stop during the next four hours while we explored and photographed Machu Picchu.

It was frustrating. I had planned this part of the trip for so long and now it seemed, as if I would only get some mediocre photos out of it. I had to set aside my expectations and try to make the best of the conditions. At least there was fog and by using a Lee Big Stopper I was able to capture some nice shapes as it rolled over the mountains. 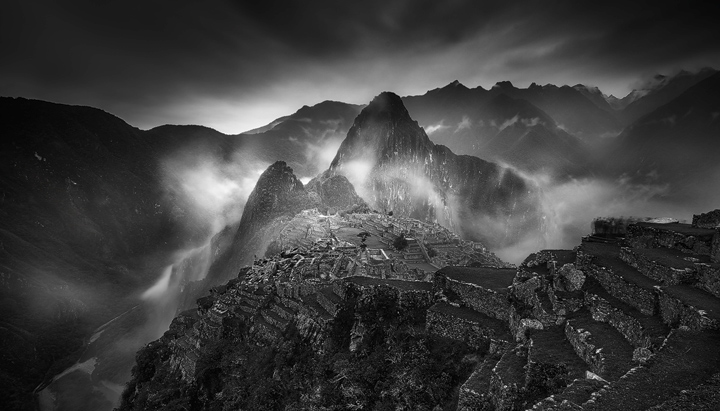 Looking back at the trip to Machu Picchu now, I can say that despite not getting the big shots, it still was a worthwhile experience. To see this immense compound up in the mountains one can only marvel at how much pain and work it must have been to build it back in the time of the Incas. It’s definitly something no photos can capture.