The city of Cusco in the Andean mountains was the next stop on our journey through Peru. The picturesque red tile roofs, the cobbled streets, the colonial architecture and the surrounding mountains – all make Cusco an interesting place to explore and photograph.

Our hotel was located just a few hundred meters from the Plaza de Armas with countless restaurants, shops, markets and tour agencies in the surrounding streets. It’s hard to set foot on this square without being intercepted by someone who wants to either clean your shoes, sell you a tour or bring you into one of the restaurants.

It’s a bit annoying and I was glad to have a great photography location on the roof terrace of our hotel. There I could setup my camera the first evening without being chatted up every other minute. The dynamic weather conditions of the day made up for some interesting light after a storm had passed through. 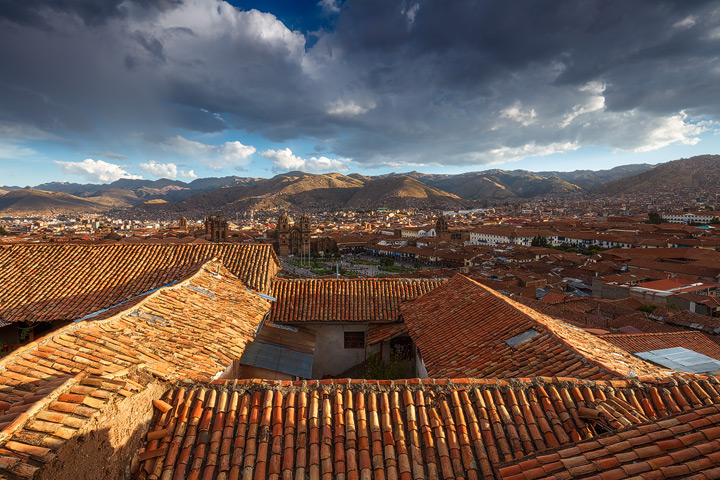 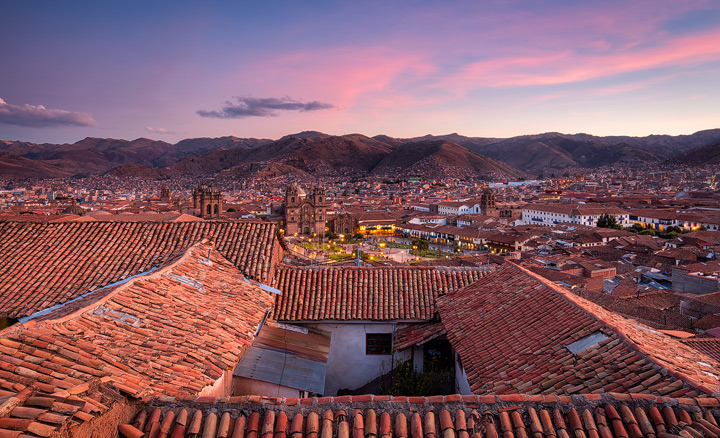 The next morning I went out an hour before sunrise to get a feeling for the city during the early hours. I was especially interested in what folks roam the streets at that time and if it was safe to bring my camera for a sunrise shoot another morning.

This time I left everything in the hotel and spent a good two hours wandering the streets with only a few people around. My resume for the morning: safe enough to take the camera next time, which wasn’t until our last morning because we already had a full schedule for the next days.

One day we spent in Pisac, which is less than an hour via bus from Cusco. From there we took a taxi up to a huge complex of Incan ruins. We could also have walked up there but it was more fun to walk back down and taxis in Peru are quite affordable.

The ruins were immense. There were terraces carved into the mountain, various lookouts, Incan buildings, all connected through a nice trail. Similar to Machu Picchu there were also lots of people visiting again. But once we started to walk a little further down the mountain the masses subsided. 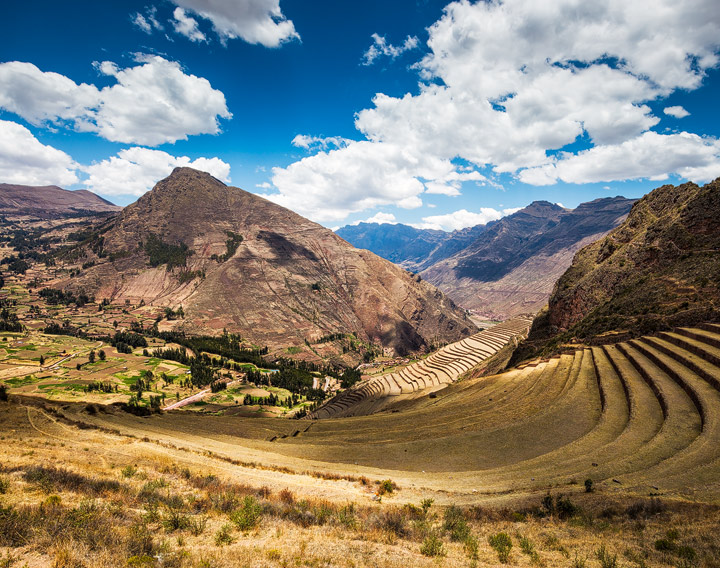 Back in town we went to the crafts market. It’s always important to find some balance. My girlfriend often waits for me while I take photos during sunset, so I have to accompany her to a market from time to time – unfortunately there are a lot of markets in South America. 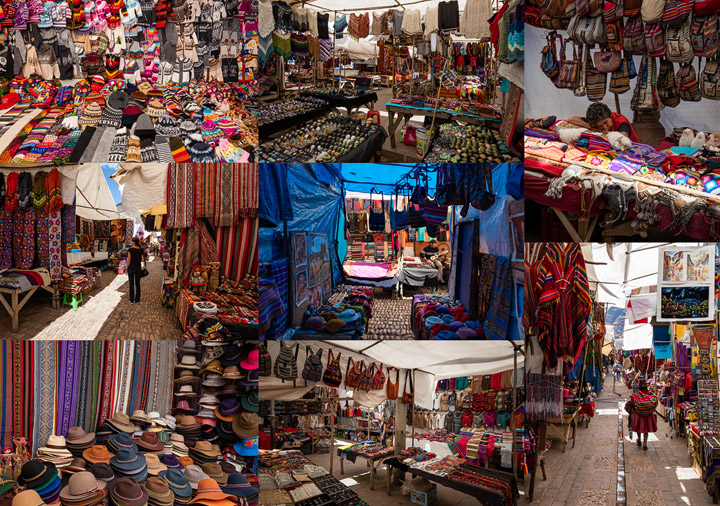 Once we were back in Cusco in the afternoon we went to one of the many tour agencies offering the Rainbow Mountain tour. From the number of agencies selling this tour it was clear that we wouldn’t be the only people hiking up the mountain the next day. But I wasn’t expecting the several hundred people who made their way through mud and snow.

The weather was miserable. We got up at 2am in the morning and went on a four hour bus ride, during which it was already raining and later snowing. Once we arrived at the trailhead, it was clear that we wouldn’t see a lot of colors that day. Only on the way up I got some glimpses of the colorful rocks that give those mountains their name. At the top there was a complete whiteout. 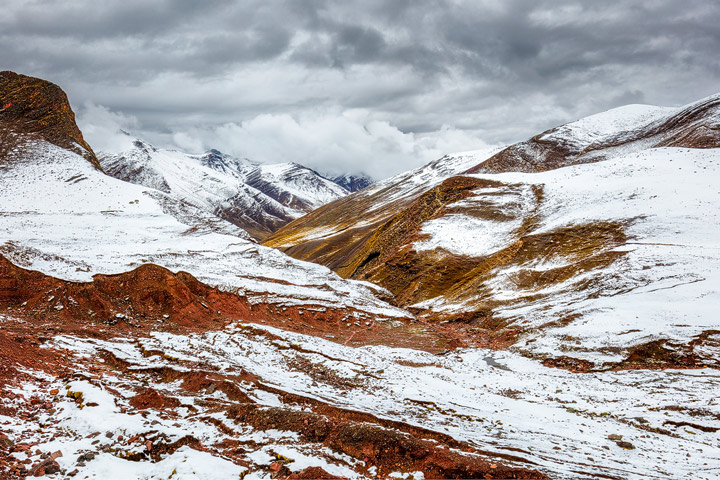 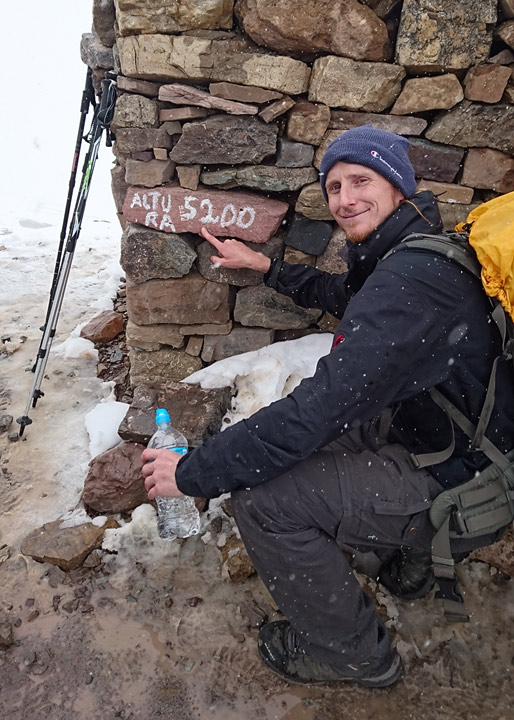 But it was still an experience to do such a hike at this altitude with all my camera gear. It was also interesting to see again how the peruvian people know to make money from us tourists. Along the trail were several stops, where one could buy everything from cookies over coke to toilet paper. For those who didn’t feel fit enough to continue the hike horses were provided for a little fee.

The height seemed to have no effect on me that day though and I felt fit, so I went by foot at my normal pace.

This proofed to be a mistake, because once I was back down at the bus, exhaustion hit me like a hammer. In minutes I went from feeling totally fit to fighting a strong headache and nausea. I took one of the pills we had bought in Cusco, a mix of Coca, ginger and guarana. From the advertisement those promised to help against altitude sickness and about half an hour later I was already feeling better.

I don’t know, if the pills actually helped or if I just needed some rest, but I didn’t care. The headache was gone and I had learned my lesson. It’s something one should be aware of when hiking in high altitude: walk at a slower pace and allow more time to rest than you normally do even if you feel fit enough to go faster.

Another lesson I learned is that at 5000 meters elevation you need sunscreen even with 100% cloud cover. I got quite some sunburn that day although I never saw the sun. 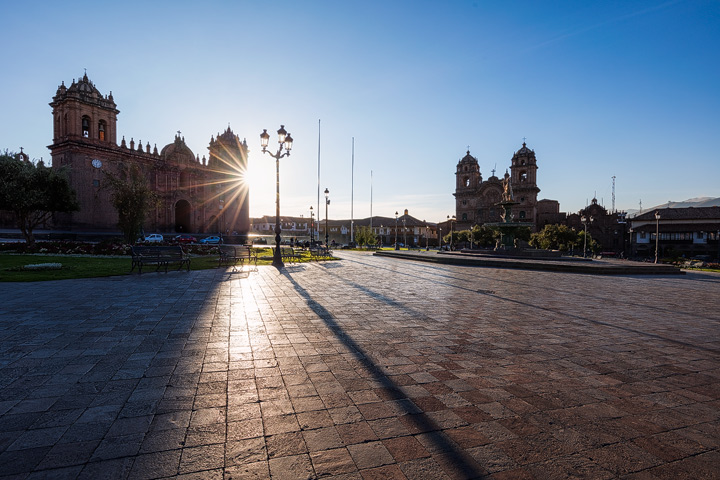 The last morning I finally went to photograph Plaza de Armas. It was a little more busy than the first time I went exploring and it was hard to focus on my photography. Many people came up to chat with me and I didn’t want to be rude and completely ignore them. After all it was a good opportunity to improve my spanish.

In the end I found a nice composition as the sun glimpsed around the cathedral, casting long shadows over tha plaza. A good way to end our time in Cusco.

Although it hadn’t been as productive as I had hoped it would be, especially our tour into the mountains, we had a great time in Cusco. It’s the perfect base to explore the Valley of the Incas and also the start of various excursions into the Andean mountains. There are also some great restaurants with our favorite one beeing the Organika near Plaza de Armas. But we were off again, this time heading towards the Amazonas and then to Bolivia.