After a wonderful stay in Noosa it was time to move on and leave the sunshine coast behind. We drove past Brisbane down towards Tweed Heads and then to a campground near Fingal Head.

Two days we stayed there just 20 meters from the beach, a fluffy kookaburra bird greeting us upon arrival. With direct beach access and only a short walk to Fingal Head Lighthouse it was the perfect location both for recharging our batteries and for photography. 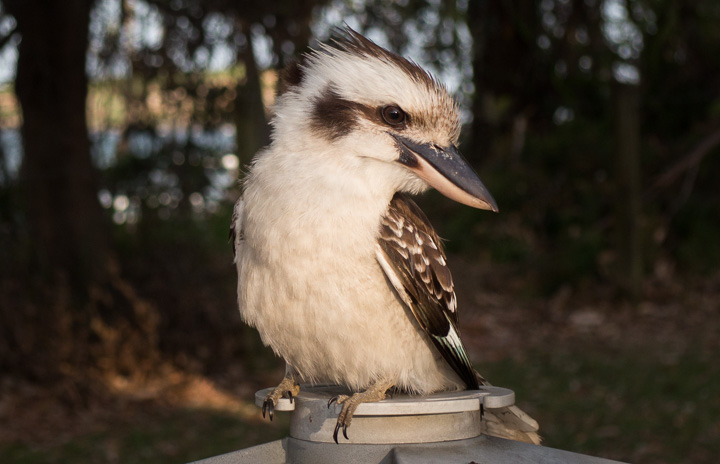 The cutest bird in the world, the kookaburra

The latter was the main reason for me to stop at this location though. Since 2009 I had known the rocks at Fingal Head from photos and I had always dreamt of visiting and photographing them one day.

And the causeway didn’t disappoint. In the two days there we had everything from clear blue skies, which I used for some night photography, over storms to an awesome sunrise. While Fingal Head Causeway is much smaller than its pendant in Northern Ireland it’s equally beautiful. When the waves roll in and break on the rocks it’s just spectacular to watch. 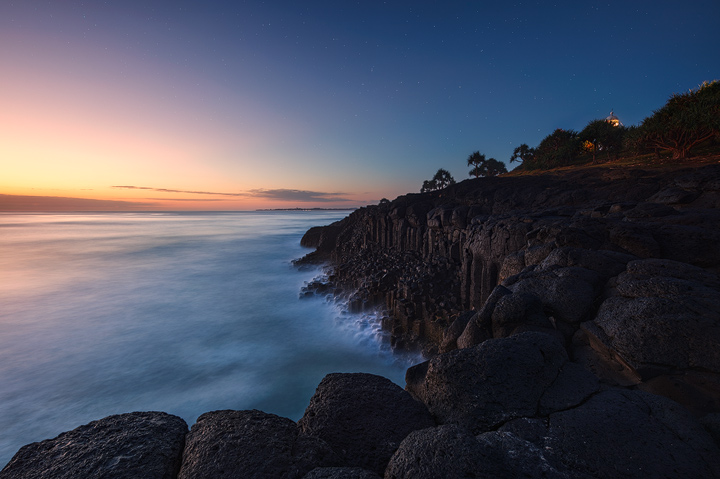 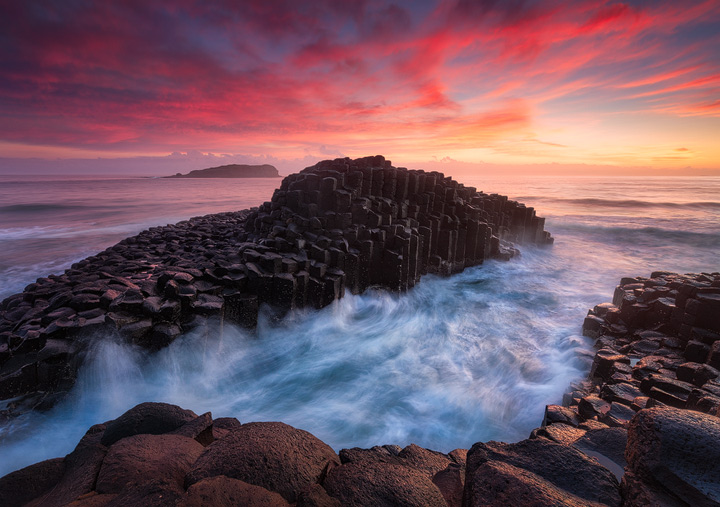 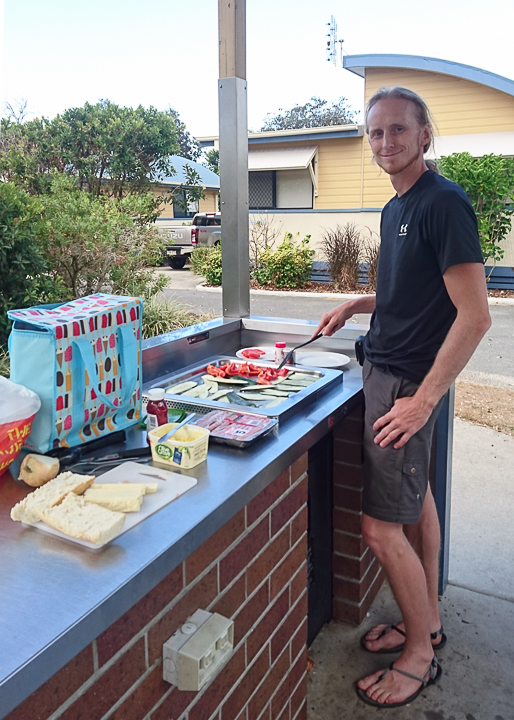 Our typical dinner in Australia. Those gas barbecues can be found everywhere (not only caravan parks) and are free to use

We then continued our drive along the coast towards Forresters Beach, another place I had wanted to photograph for a long time. Unfortunately the nearest caravan park was 10km away this time and not nearly as comfortable as the one at Fingal Head. But we just stayed for one night, so this wasn’t too much of a problem.

The best part about Forresters Beach were the rock structures south of the beach. I hadn’t seen anything like it before – it looked like a huge mosaic of rocks. But as usual with seascape photography, despite endless compositional opportunities, in the end the tides dictated what I could photograph.

During our visit to Forresters low tide coincided with both sunset and sunrise. This meant I wouldn’t be able to photograph waves rushing over the rock pavement and that some of the more spectacular compositions weren’t possible. So I focused my efforts on finding interesting patterns and colors in the rocks instead.

The first evening I was mainly there scouting compositions for the next morning. I didn’t expect to take a photo since the beach was facing east and the sky was covered by thick, grey clouds. But just before sunset the sun broke through in the west and painted the easterly sky in beautiful reds and magentas. Luckily by then I had found the perfect composition to complement those colors. 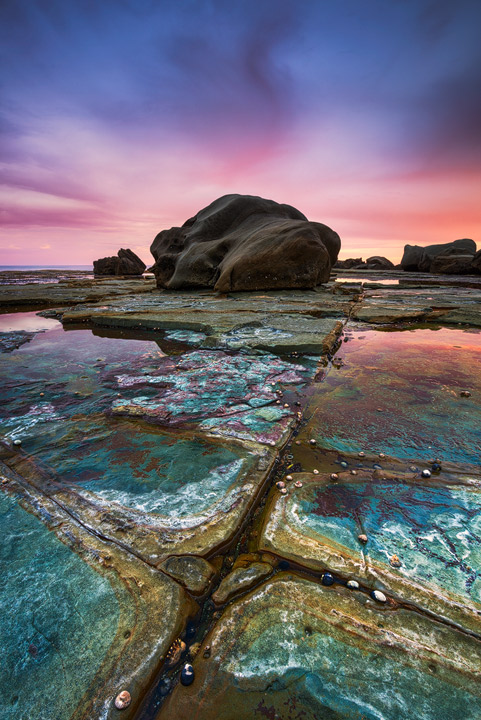 After another early morning shoot we went to the next caravan park, this time in Narrabeen close to Sydney. If you ever want to visit Sydney and you are traveling with a caravan or campervan, Sydney Lakeside Holiday park is the location to stay.

It’s not cheap for a caravan park. But considering the premium facilities, the awesome beaches in walking distance and the possibility to get to Sydney via a combination of bus and ferry in roughly one hour, it’s a great deal. And the ferry crossing from Manly to Sydney is an experience by itself.

In Sydney we visited many of the typical photo spots, from which you have a great view of the Skyline and the Opera. But my favorite view was near Cremorne Point Warf. It’s the perfect location to photograph sunset and blue hour with a long lens. 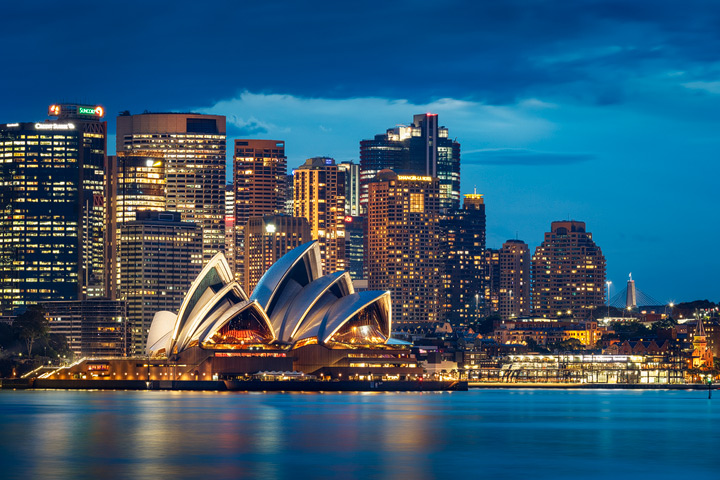 We stayed a total of four days in the area because, besides Sydney, we also wanted to explore some of the northern beaches. I did a lot of rock climbing and scouting along the cliffs in those days and found some great locations.

But unfortunately we had the worst weather of our Australia trip during those days. While the cloudy skies and the rain didn’t bother me when photographing blue hour in Sydney, they didn’t provide the light I needed to capture dramatic seascapes. The tide wasn’t high enough either. And so I ended up photographing no seascapes at all on this occasion, although I tried to heed the advice I gave in one of my recent youtube videos. But when photographing every day for a longer time, you also get a bit tired. I certainly was.

So instead I enjoyed a few runs along Narrabeen beach and swims in the huge salt water pool, which was built right into the rocks at the northern end of the beach. It doesn’t always have to be about photography, which I began to realize more and more the longer our journey around the world lasted. It still felt hard to miss photographing a sunrise or sunset, but it became easier.

From Sydney it was a relatively short drive into the Blue Mountains, which lie roughly 100km west of the city. Our first stop was a town called Blackheath. We were nearly the only people at the caravan park there, which again was very well equipped.

This is something, which holds true for most of the parks we stayed at in Australia. The facilities were very good, most of the time it wasn’t all too crowded and generally those caravan parks were located in very nice settings – except for a few places like the park near Forresters.

We had picked Blackheath as our first stop because of a few viewpoints we wanted to checkout in the area. First we went to the Govetts leap lookout and did some exploring along the various trails starting at the car-park. Later we drove to Pulpit Rock lookout, which would also have been a nice hike, but we only had one day in the area, so we decided to drive there instead.

While Pulpit Rock lookout is also very spectacular, the view right from the car-park at Govetts leap seemed to be the most promising for sunrise the next morning. Normally I don’t mind putting in some work to get my photos, but it was nice to park our campervan right on location the next morning. And despite the easy access and the wonderful conditions, we were the only people there.

It’s quite fascinating that after so many months of traveling around the world not once I had to share a location with other photographers yet – Machu Picchu might have been an exception, but I shared it mostly with tourists and selfie hunters. 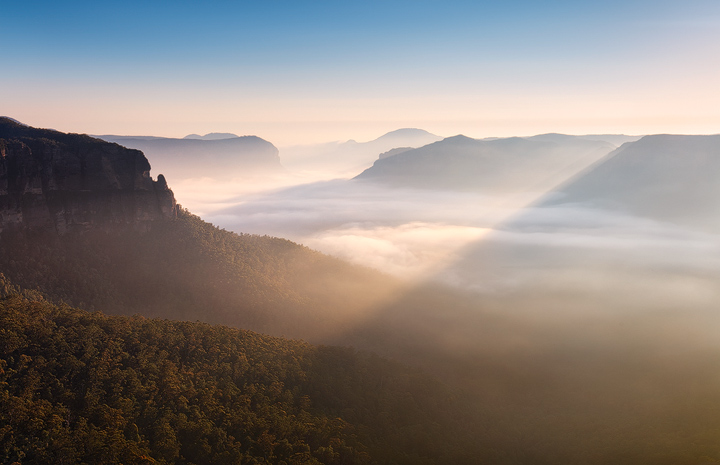 We then settled over to Katoomba, which was just 15 km closer to Sydney, but also much more crowded. The caravan park there was full, so it was good we had reserved our spot the day before.

This is always a good idea when traveling by campervan. Usually we planned ahead a few days and so it was possible to reserve our campsites one or two days ahead. Mostly this wasn’t necessary, but it just felt good to know we wouldn’t have to search for a place to park our van after a long drive.

Located around Katoomba are countless trailheads and viewpoints and so we spent most of the day exploring. After the few rainy days in Sydney it was hot again, but with the wind close to the canyon rim the climate was quite enjoyable. The last viewpoint of the day for us was Therabulat lookout. It’s a little off the beaten track and again we had it for ourselves.

I was expecting a spectacular sunset as the clouds rolled in, but unfortunately the thickest clouds settled far to the west and snuffed out the sunlight just before sunset. It became very windy too and I had to abandon my photo spot right at the edge of the rim. But the photo I took an hour before sunset already contained some beautiful light and cloud patterns, so I wasn’t overly disappointment. 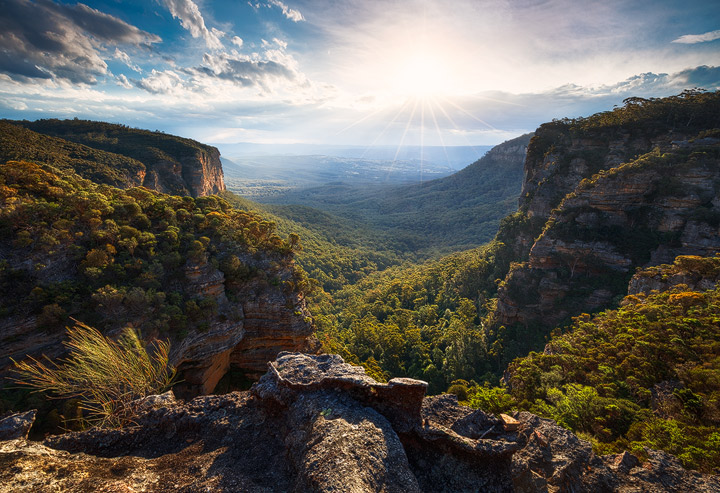 Before our 10 hour drive to Mount Buffalo National Park the next day I got up very early once more. This time I was up to photograph the most popular view in Katoomba, the Three Sisters. This viewpoint was very crowded during day, but before sunrise there were nearly no other people.

The air that morning was freezing and the wind blowing in strong gusts. I had to time my exposures between those to make sure to get a sharp photo and to avoid too much motion blur in the trees to the left. The moment the sun peaked over the edge of the canyon and bathed the valley below in warm morning light was magical. 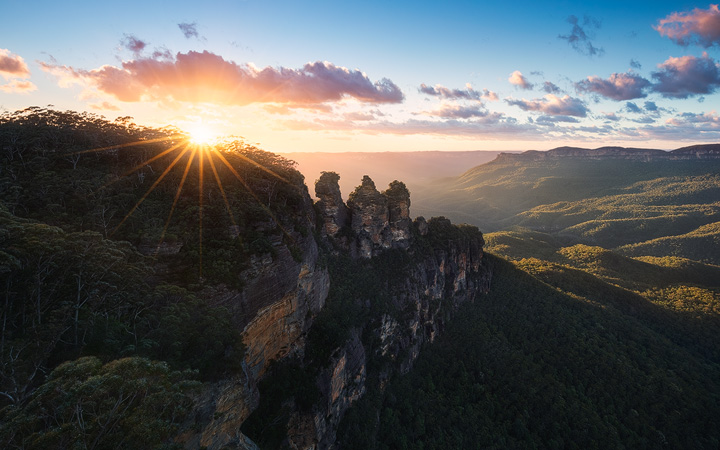 But I couldn’t linger too long and had to quickly get back to the camper so we could get on the road again.

We had a great time in New South Wales. It was very different to Queensland. The coast was much more raw and the opportunities to capture spectacular seascapes endless. The climate was more moderate than far to the north were we had started our trip. But it was also a bit more crowded, especially around Sydney and the Blue Mountains. What we could generally say about Australia this far is that its diversity blew us away again and again.