The first days in Queensland had already been very diversified. We had been to the tropics around Cape Tribulation, to the rolling hills around Millaa Millaa and finally went on a boat ride through the Whitsundays.

Up until now though we had not seen any kangaroos, which are the first animals which come to mind, if I think of Australia. In Arlie Beach I studied some tourist brochures and in one of them I found a photo of kangaroos on a beach. A little online research revealed that this photo had been taken at Cape Hillsborough, which happened to be just a two hours drive further down the coast.

When we arrived at the tourist park right at Cape Hillsborough beach it didn’t take long until we saw the first kangaroos. They were hopping around in the park between the campsites and the owner of the park told us that in the morning, when it’s cooler, they also like to explore the beach.

But besides Kangaroos there’s much more that makes Cape Hillsborough a great place to visit. The landscape is just beautiful and offers many photo opportunities. We did some hikes along the beach, which at low tide extends far along the coast. In one area the sand seemed to be moving and as we got closer we saw a huge colony of soldier crabs.

We even met our first kookaburra. Suddenly he sat right next to our camper and at first we thought somebody had lost his cuddle toy. This just has to be the cutest bird in the world. Kookaburras look very fluffy and make so funny noises. When they sit up in the trees at night they seem to constantly laugh at you. Sometimes it sounds like a herd of monkeys.

In the evening I took my first photos of Cape Hillsborough beach. I was hoping for some clouds but as those didn’t appear I went back to the Campervan for another short night of sleep. 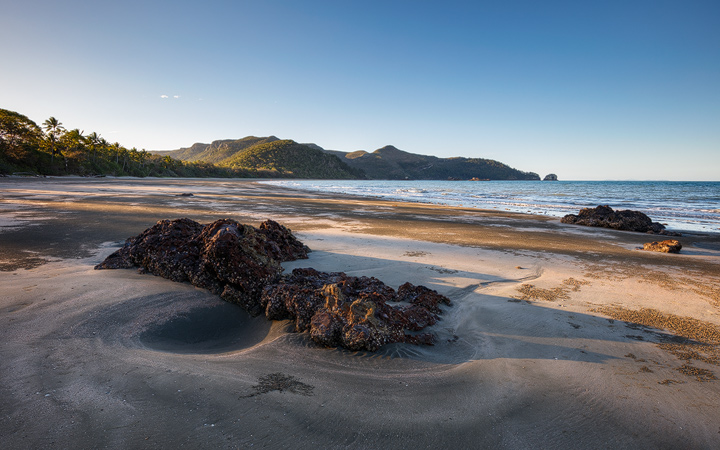 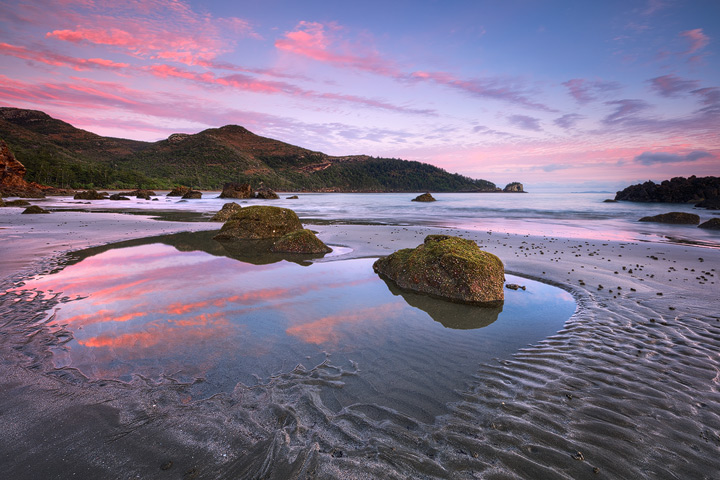 Early the next morning I went to the northern part of the beach where I had found some interesting rock formations the day before. I was hoping for a kangaroo to hop by but those had decided to explore the other end of the beach. I knew until I would have gotten there, they would have been gone so I decided to focus on the landscape and compose a photo including one of the many tidal pools. With the pastel colored sky above it was one of the more colorful mornings of our trip till now.

Our last stop in Queensland was Noosa on the northern end of the Sunshine Coast. This area is very popular with surfers and for good reason. There’s a lot of wave action to be had, which also makes Noosa a great place for seascape photography.

Along the Noosa Heads coast runs a beautiful coastal trail along which many photogenic coves can be found. I especially liked the area near the Paradise Caves and Devil’s Kitchen, which is where I took the photo below. 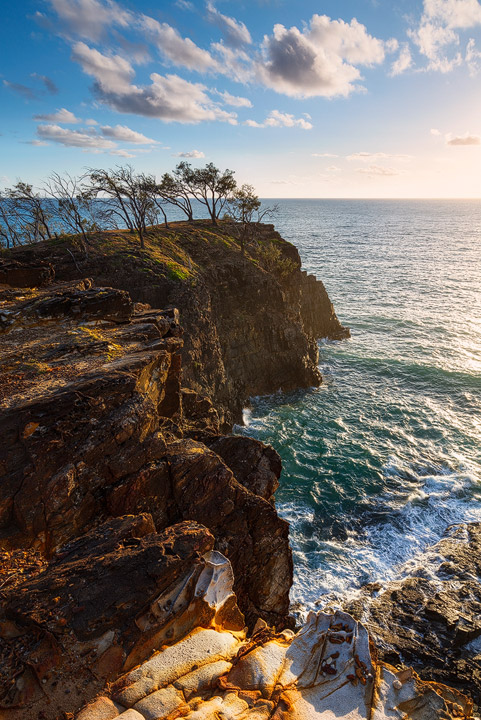 As usual I had scouted the location the day before and I knew exactly how long it would take me to hike there in the morning. Well, theoretically. There was one thing I hadn’t taken into account – spiders. While in the afternoon I only needed 20 minutes to get to the location, in the morning it took me more than half an hour.

When I started the hike in the predawn darkness I encountered a huge spider’s web spanning the trail after 2 minutes along the track, a fat garden orb spider sitting in the middle of it. Sure enough this wasn’t the only web I had to climb under that morning. Although those spiders are not poisonous I was very careful to avoid the webs and I was glad when I reached the viewpoint above Devil’s Kitchen to finally enjoy the morning breeze.

So the next morning I decided to checkout a viewpoint, which wouldn’t involve dodging spiders. From Sunshine Beach I did some rock climbing around the coast to reach a beautiful rocky outcrop with huge waves crashing in. I instantly had a picture in my mind of me standing in the middle of it, which at first seemed a bit too dangerous.

Bigger waves often come in sets, followed by a calmer phase. It’s hard to predict and time. And there’s always a chance for some rogue wave hitting the shore. But with the receding tide and with my eyes fixed on the sea I finally ventured out to take the photo I had envisioned. For such photos I usually set my camera to interval timer and leave it to take a photo every 5 seconds until I’m back. This way I don’t need a wireless release and I also don’t need to rush. 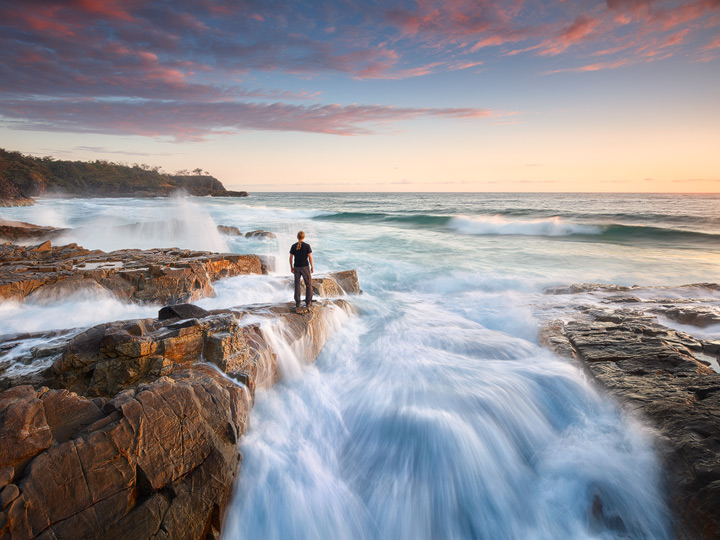 The final result wasn’t shot in one frame though and needed some blending. While the huge wave you see in the foreground crashed onto the shore I didn’t stand on those rocks. In the best case I would have been drenched and in the worst swept off those rocks. Instead I first took many photos of the crashing waves without me in the frame and the photo with me during a calmer phase. The blend was quite easy as I show in my youtube tutorial on photographing seascapes.

The first two weeks of our road trip along Australia’s east coast went by very fast. We already had to skip a few places because there was still so much to come on our way down to Melbourne. Five weeks might sound like a long time, but when traveling through Australia it’s like a short time vacation.