After ten weeks in South America we flew from Santiago to Sydney and from there up to Cairns. Australia was the fifth country on our tour around the world and the contrast to South America couldn’t have been bigger. The houses around Cairns looked like out of a magazine, there were huge supermarkets and everything was clean and polished.

We had rented a Jucy Condo for our travels and our first stop was Port Douglas north of Cairns. It felt so good to have the flexibility of an own car. The freedom of just going wherever and whenever we wanted was great after relying on buses, collectivos and taxis for so long.

Don’t get me wrong here, we had a great time in South America. But it was also tiring at times and especially in terms of photography there were often hurdles, which made it hard and sometimes impossible to get the photos I wanted. 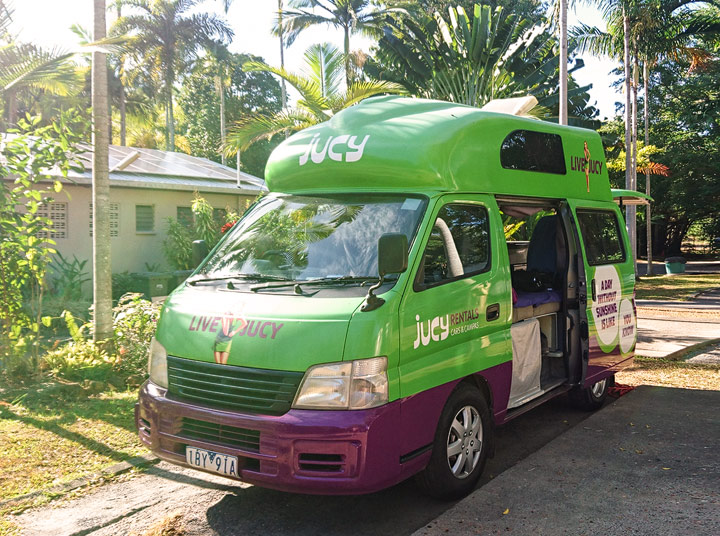 The first thing we did after picking up our campervan was heading to a supermarket. I knew it would be expensive, so there was no surprise here. But it was also great to have such a variety of groceries to choose from again.

Also, we would be able to cook those ourselves so the constant search for the next meal or restaurant was over. This normally isn’t a problem during shorter vacations. But when traveling for several months eating out two to three times a day can be quite annoying and it is certainly not healthy.

We ended up staying in Port Douglas for four days to recharge our batteries and to explore the surrounding beaches. I ventured out to photograph sunrise and sunset a few times but I’m not fully satisfied with the results I got. But that’s ok, considering that we had been traveling for nearly three months a bit of a pause was necessary.

What I started doing again was my morning ritual (see The Miracle Morning for some inspiration – buy US, UK, GER*), which I had done less and less in the confined spaces of our hotels in South America. Now I could just head to the beach and do some sport, read a bit and prepare a good breakfast involving fresh fruits, yogurt and cereal.

The only thing that was a bit problematic at first, was the absence of free WIFI. I had counted on the caravan parks to provide WIFI but wherever we went, if there was WIFI it was either slow or expensive. Since we hadn’t completely planned our route through Australia yet and just knew when we wanted to be in Melbourne, internet access was a necessity. So after a while I ended up buying an Australian SIM and some data for 40$, which lasted a few weeks.

From Port Douglas we drove up through the rain forest to Cape Tribulation. What a fantastic drive! The winding roads took us through thick vegetation and we ended up at a wonderful campsite just 100 meters away from an empty, mile-long beach. It seemed we were the only tourists at the time and besides a few Australians there weren’t many people in the area.

It was the middle of November and it was hot. During day we had between 35 and 40°C. At night it didn’t cool down much and sleeping in our campervan with open windows was a bit creepy because of all the spiders and insects in the area. Australia might have some of the cutest animals in the world, but it also has plenty of the deadliest animals. And the first days it was kind of awkward to walk around in the jungle. 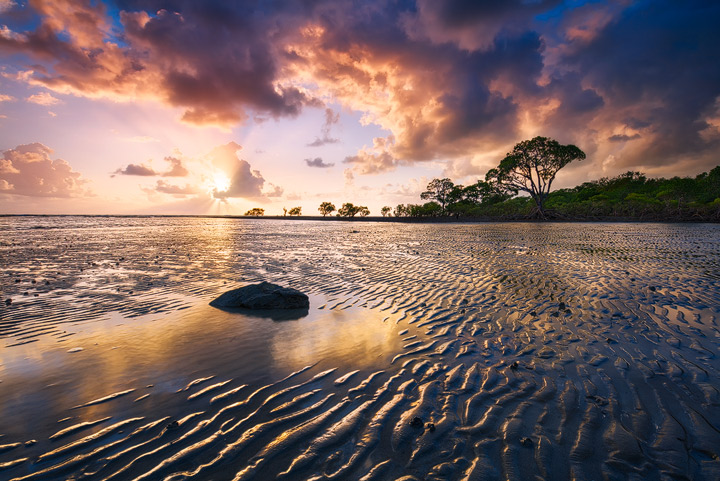 But with time we got used to it and developed a routine, which included always checking the content of our shoes before putting them on. I also got to photograph my first spectacular sunrise. At low tide the beach revealed some intricate structures and when the sky exploded it was magical. I would have enjoyed it much more though, if this hadn’t been crocodile country, so I had to keep a constant eye on the waters edge.

This might sound a bit exaggerated, but just a few miles down the road a tourist had been killed by a salt-water crocodile a few years ago. Swimming in the dark is not the best idea up there but also roaming the beaches close to the waters edge, eyes fixed on the display of a camera didn’t seem the safest thing to do. 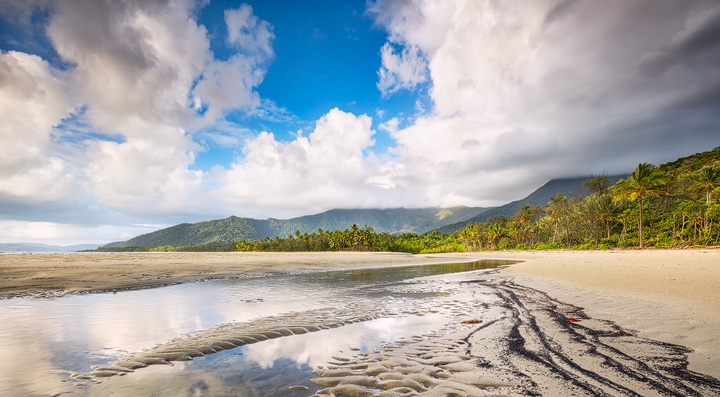 After two days in the tropics we decided to head down to some cooler areas again. I had read that around Millaa Millaa was a nice waterfall route where you could visit several beautiful cascades. And since we hadn’t seen a waterfall since Mindo, we decided to give it a try.

In the end though the highlight for me weren’t the waterfalls, which unfortunately were a bit too dry for photography. But the rolling hills of the surrounding countryside presented some beautiful views. In parts it looked a bit like the area in New Zealand, where The Lord of the Rings and the The Hobbit had been filmed. 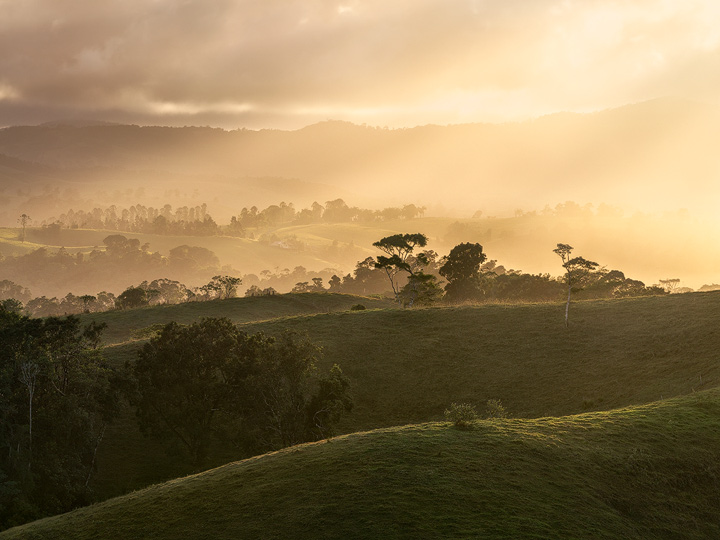 A long drive of more than eight hours brought us to Airlie Beach. This is the main port for trips to the Whitsunday Islands. Besides that there’s not too much to see. It’s quite a nice town with a few smaller beaches, but nothing spectacular. We stayed two days to do a full-day trip to Whitehaven Beach.

It would have been great to do a multi-day sailing trip there. But such a trip should be booked well in advance and it was also slightly above our budget. Just for reference, the one day trip already cost us 180 AUD per person.

But it was worth it. We happened to arrive at Whitehaven Beach as one of the first boats and this enabled me to get my photo for the day without hundreds of people in the frame. Because around noon the beach gets very crowded as more and more boats arrive. 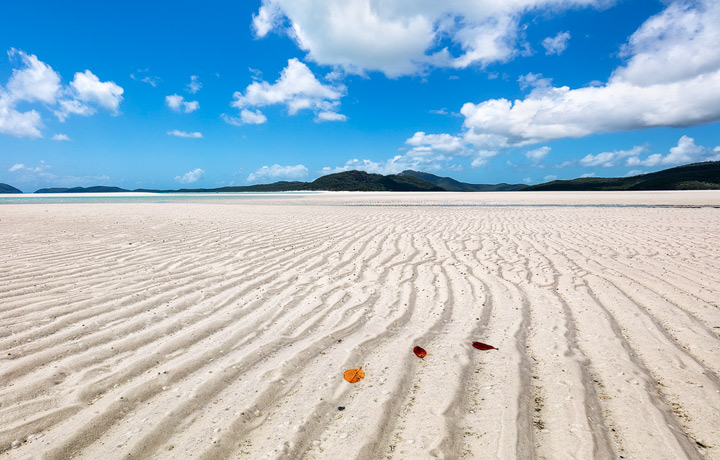 It’s no wonder that this beach and the Whitsundays in general attract so many visitors. The area is a nature paradise. There are 74 little islands lined by white beaches and surrounded by turquoise water and coral reefs.

It would have been great to do some snorkeling. But since during the few days we had been in Queensland, we had already read about several people dying during snorkel trips in that time, we decided against it.

One has to know that from roughly November till April there’s an increased amount of stingers in the waters along Queensland’s coast. Among those, some very poisonous species, which can kill through simple contact. People who still want to snorkel usually don stinger suits in an attempt to reduce the possible contact areas.

Fortunately Australia offers enough to do and see on the land and in the second part of this article I’ll show you two more beautiful places we visited in Queensland before I take you along our journey through New South Wales and Victoria. So stay tuned.

* These are a Amazon Affiliate Links. If you use them to buy something, I’ll get a little commission from Amazon