The cloud forest of Mindo

When we started planning the first part of our journey around the world our focus immediately fell to the Galapagos Islands with its marvelous creatures. But to begin our journey there would have meant a quite stressful travel with many flights in a row.

So I started looking for interesting places near Quito, where we could have a more relaxed start. After some research I came upon the Cloud Forest of Mindo. Reading about this thick rain forest with its many rivers and waterfalls just a two hours bus ride from Quito got me curious. Without doing any research on possible photo spots I started searching for a place to stay.

This is definitly not my typical approach for planning a trip, but with six months of travelling I thought I’d loosen things up a bit. We had done so much planning with the flights, the hotels – basically everything concerning travelling itself. Planning the different photo opportunities now happens during our trip. 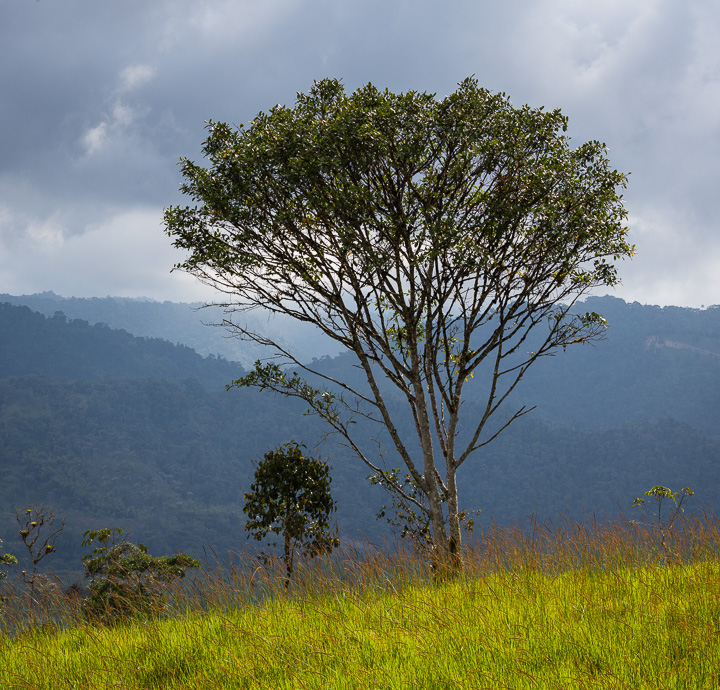 The place we decided to stay in was the so called Yellow House. It’s not directly in town, but on a little hill to the east, easily reachable by foot within five minutes.

This place has a lot to offer. There are a set of trails through the forest starting directly at the Hacienda, right in front of the houses we could observe lots of colorful brids and the view during breakfast was so interesting that we nearly forgot to eat the wonderfully prepared food. Here’s a little video I shot while sitting on the breakfast table.

The day after our arrival we made the typical tourist tour to the Sanctuario de las Cascadas a few miles out of town. The one hour walk there doesn’t offer much, so we took a taxi from the Hacienda, which dropped us right at the Tarabita.

After crossing a deep canyon on this cable car we wandered the rain forest for several hours and visited six cascades of different size. Those weren’t the most spectacular waterfalls I’ve seen, but they were truely beautiful – each with its own character. My favourite cascade to photograph was the Cascada Madre, which you can see near the end of the video below. 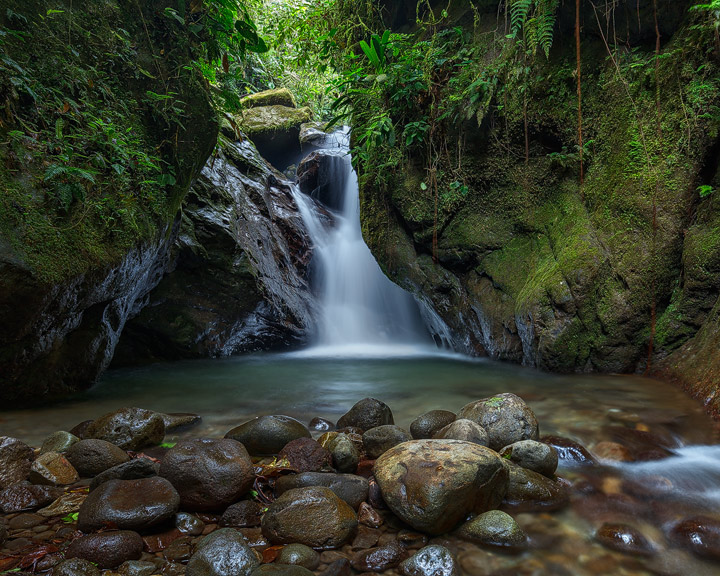 For those who don’t enjoy heights, it’s not necessary to ride the Tarabita. Although nobody will tell you about it, there’s a track leading down to the Nambillo waterfall right next to the Tarabita. Down at the waterfall is a bridge and from there you can continue on to the Sanctuario. I guess they just want the visitors to pay the Tarabita and honestly, it’s six dollars well spent, because the views during the ride are fantastic.

The next attraction we visited was the Mariposario. Since Mindo has a very pleasant climate with temperatures around 20 to 25°C, we decided to walk and skip the taxi this time. I didn’t expect too much from this place. The waterfalls the other day were more to my taste but I packed my tripod anyways.

And this was a good decision. I was a bit overwhelmed by the number of butterflies in the live exhibit and by their size. In the end we spent more than two hours there. We observed the different stages of the life of butterflies, seeing all phases of their transformation. And I also took a few photos. 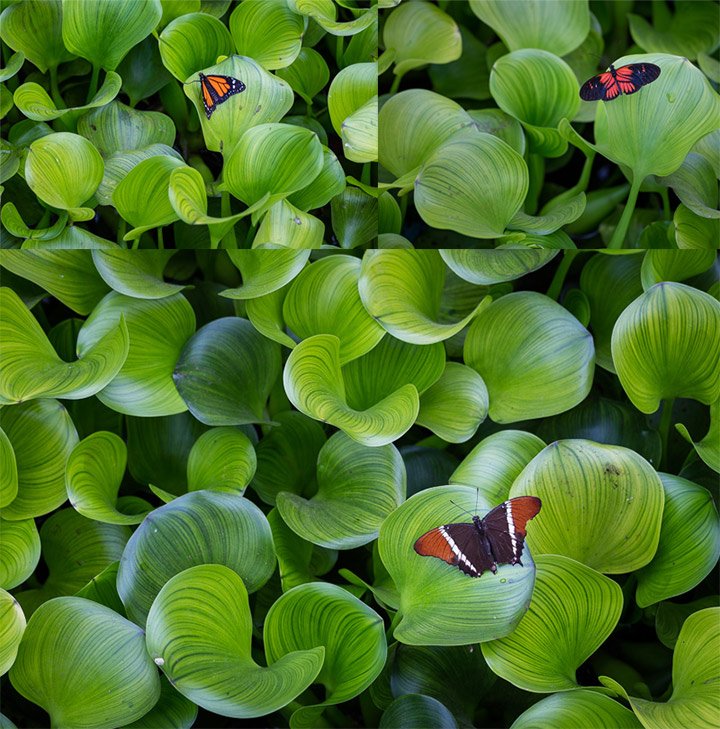 Some of the smaller butterflies, which I photographed at the Mariposario

After those first wonderful days I started browsing the internet for some less known places within the cloud forest. In town the advertised things to do are the Mariposario, the Santuario de las Cascadas, a canopy adventure and tubing. But Mindo has more to offer and with all the rivers and mountains I was certain that there had to be more waterfalls.

I stumbled upon the Rio Bravo Reserve and some photos of a waterfall surrounded by thick jungle vegetation. Although most of the photos on google were just snapshots, the area looked promising. With just one day left I quickly sent a message through the facebook site of the reserve. The answer came within half an hour the same evening. A few follow up messages and a call the next morning later, and we sat in a jeep with our spanish guide Juan.

On a bumpy road our way led us up into the mountains. At the end of the road Juan opened the gate to the reserve for us and we entered what for me is one of the most beautiful forests I’ve seen until now. Our destination that day, the Esperanza waterfall.

To be honest I could already have spent days taking photos during the hike to this waterfall. But with the limited time we had I kept the camera in the backpack until we reached the roughly 100 meters high cascade. One can swim in the waters beneath it but I immediately started exploring, searching for perspectives. This was a lot of fun, because I wasn’t biased by other photos, which is so often the case when I arrive at photo locaions during my travels around Europe. 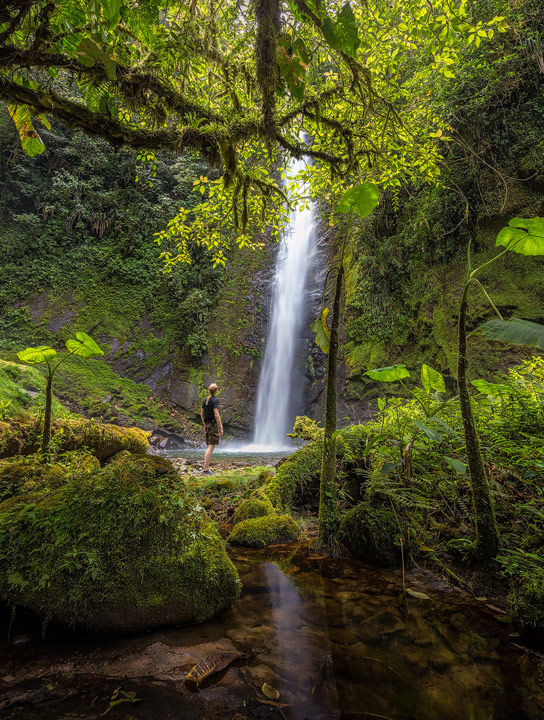 The highlight of our trip to Mindo, the Esperanza waterfall

I ended up taking three different photos of the waterfall, taking my time to capture it in different light. After three hours we were back at the jeep and on our way into town. It was a great finish for our time in Mindo. For me the visit of the Rio Bravo Reserve made our stay there complete, which doesn’t mean it made it easier to leave the next morning.

We already miss the Hacienda and the three dogs, which greeted us every time we came back from town. The tasty breakfast and our great hosts, which made us feel at home there. And also the town itself, which radiated a very relaxed atmosphere. 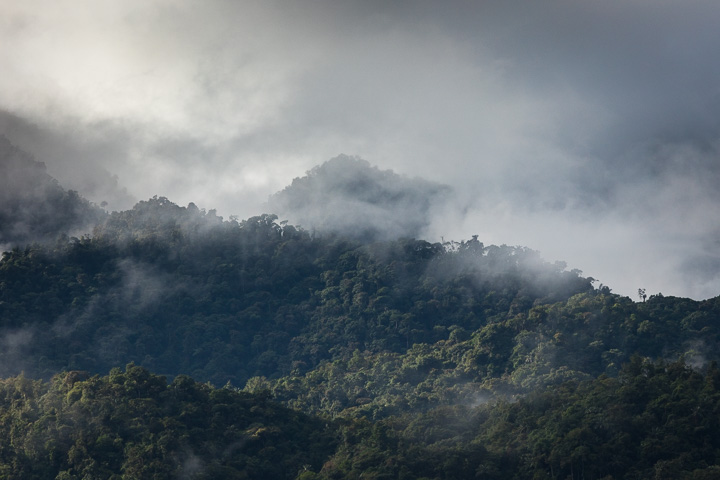 Morning view from our balcony