As I’m writing this it’s been nearly a year since we’ve been to Australia. A year since we drove from the Blue Mountains down to Mount Buffalo National Park.

It was the longest drive yet, more than 9 hours with our campervan. And when we arrived down in the south it was noticeably colder and the evening felt nearly a bit frosty in t-shirt and shorts. Since I knew that after the long drive I wouldn’t have time to scout and photograph anything, I had planned two nights at one of the local caravan parks. There were a few parks in the area, so it was no problem to find a nice spot to stay.

The next morning we first went to Lady’s Bath waterfall. It’s a very popular place for swimming. Unfortunately the falls didn’t have much water, so they weren’t interesting in terms of photography. But it was still a nice hike along the little creek.

Later in the evening we dove up the long, winding road to the Hump trailhead. The so called Cathedral, which you can see from the Hump, was the real reason why I wanted to visit this park. Ever since I had seen a photo of that area by Dylan Toh, I wanted to photograph this view myself. Unfortunately, like so often during our travels around the world, there was no cloud in the sky for sunset. But still, what a wonderful vista. 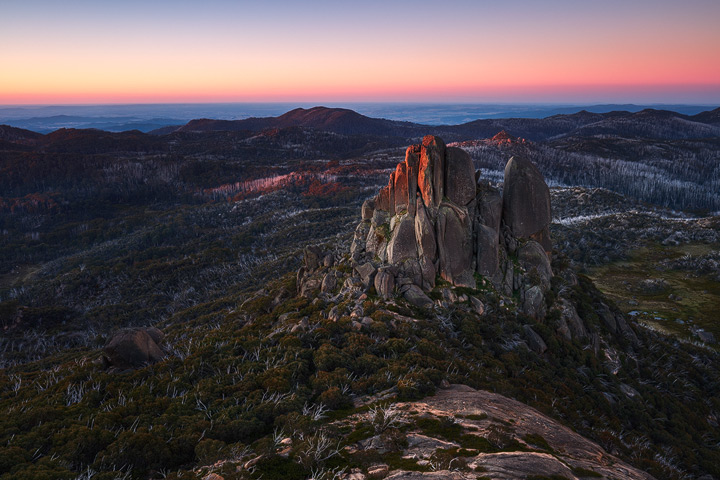 The next day we drove on to Ballarat where we visited Patrick the Wombat and his friends. It was the first time we saw wombats since in Australia. And they really are some of the cutest animals we had ever seen. In the park it was even possible to cuddle one of the wombats and get a photo. 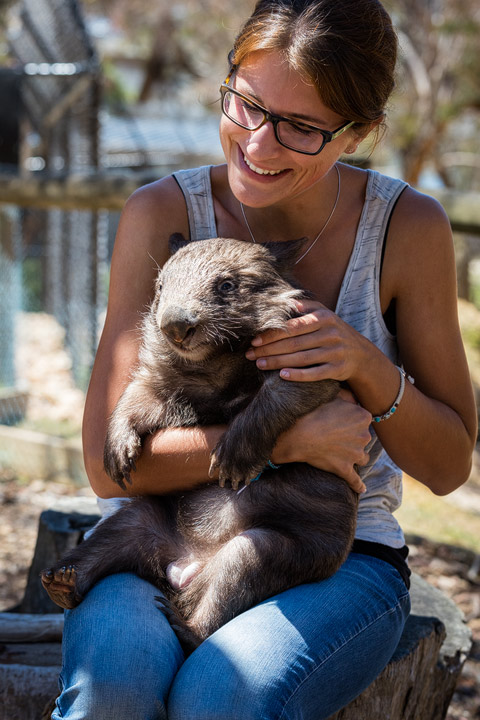 My girlfriend with Patrick Junior

After this short stop we continued our tour to one of the highlights of our trip through Australia, the Great Ocean Road. At least I had thought it would be a highlight. But despite the spectacular coastline I just didn’t get a real connection to this place. It was insanely touristic. After spending most of the time in Australia in relative solitude when out photographing, it was at the Twelve Apostles lookout where, for the first time, I had to kind of negotiate my tripod position with the masses of people.

We had planned two days in the area and we visited every viewpoint. The problem with viewpoints: they don’t allow for much originality in landscape photos. And the areas between the viewpoints were often closed for tourists as indicated by fences and signs.

I have to admit from time to time I’m guilty of ignoring such signs, especially, if they feel completely random and out of place. But I try to do so less and less. We always have to be aware that photos taken behind such fences and sings will motivate others to ignore them too. And while we might try to leave as few footprints as possible in those areas, it will sum up over time. Especially in times of Instagram this becomes more and more of a problem.

A bit frustrated by the fences and the weather, which also wasn’t ideal on the first evening, I gave the Apostles another try for sunrise. And again, despite much less people, I just didn’t feel overly inspired up at the viewpoint. 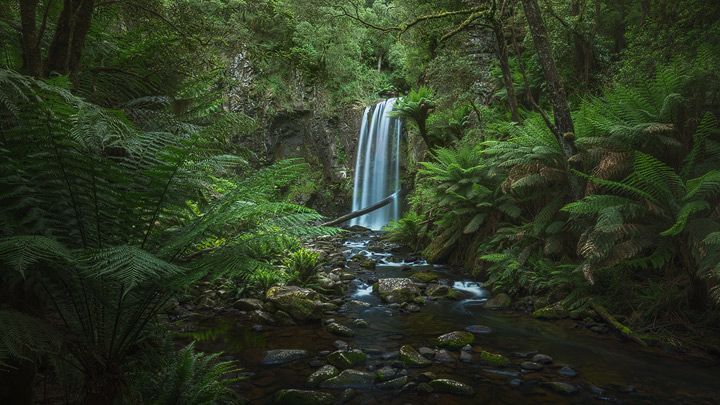 So to get out of the rut we left the coast for a few hours and went to explore the Otways. At Hopetoun falls we again found some solitude and I spent a nice two hours in the river searching for different angles to photograph the cascade. The photo above ironically was taken right from the viewpoint.

After having some great lunch at Yatzies Pancakes in Lavers Hill we went back to the coast. The sky was still grey and it didn’t look like there would be any change for sunset. The whole situation reminded me of our visit to the Antrim coast a few years ago, where we also weren’t lucky with the weather and, to make the most of it, went exploring some waterfalls during the day. Back then when we returned to the coast on our last evening just for sunset a gap appeared at the horizon beneath the grey clouds and the sky exploded in intense oranges, reds and magentas.

That evening at the Giants Causeway has been a source of motivation and inspiration for me ever since. It had me heading out again and again over the last years, hoping to someday witness such a spectacle again.

At the Gibson Steps, more than four years later, my persistence was finally rewarded. It started exactly as in Antrim, with a bit of rain. But as I scouted the beach for compositions I could already see a slim, bright line at the horizon, just behind the Gibsons.

My excitement nearly made me forget to find a composition so as the sky began to glow I went racing along the beach, desperately searching for some foreground interest. Luckily the rising tide had just reached a beautifully shaped rock close to the cliff. I couldn’t have hoped for more, all the elements were there and I just had to position my camera, wait for a wave to rush up the shore and press the shutter. 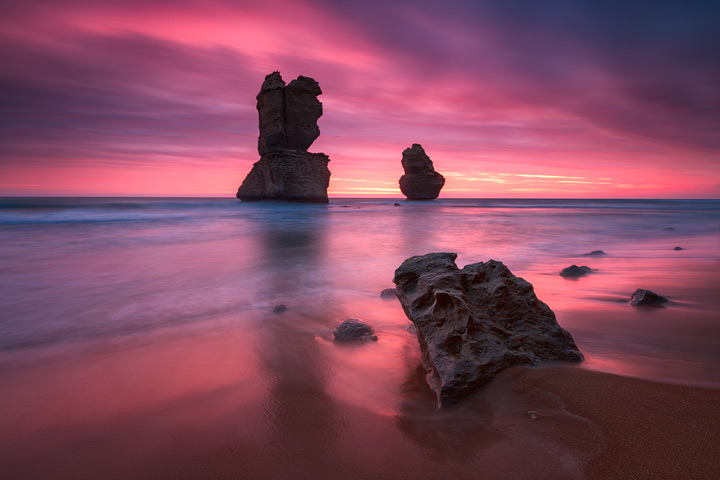 The photo of the Gibson Steps instantly made me forget all the days I had been out during the last months of travelling without taking a great photo. All my endeavors were finally rewarded. So when we left the Great Ocean Road the next day I was very content. I didn’t even get up for sunrise.

Our next stop then was Phillip Island south east of Melbourne. The inspiration to visit this place again came from another photographer, whom I’ve been following for many years now. A few weeks before we flew to Australia Kah Kit Yoong posted a spectacular photograph of the so called Pinnacles rock formation at Cape Woolamai. Since we would drive past this area on our way to Wilsons Promontory Park anyway, I convinced my girlfriend to include it in our itinerary.

Although I had read different reports when I had researched this place, it was quite easy to get down to the shore. The track is steep and a bit slippery but with the right footwear no problem. Down at the shore I was a bit overwhelmed. There were rocks everywhere, steep rock formations to either side of the cove and then there would have been even more photo options behind those.

But I focused my full attention that evening on the Pinnacles. It’s not so important for me to come away with many different photos from such a place. I just need one photo that stands out. And this evening it wasn’t very hard to get it.

The light from the Gibson Steps had been following me. Or had I been following the light? I don’t know. Once more the sky exploded in intense colors and I couldn’t believe how lucky I was. To get such light two days in a row is not very likely. 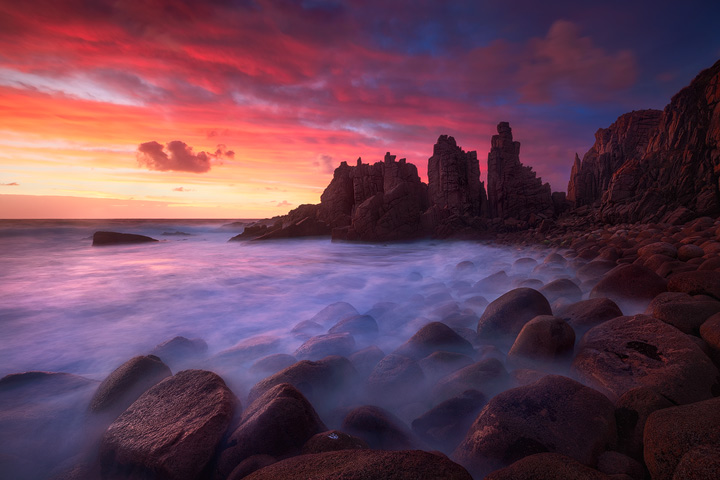 The last stop on our tour through eastern Australia was Wilsons Promontory national park and it was undoubtedly one of the highlights. We had reserved a campsite at Tidal River Camping and it was one of the coolest campsites we had in Australia. Surely it was quite crowded, since the park is close to Melbourne. But the area is so huge that it didn’t feel like that.

In close proximity to the caravan park are four spectacular beaches: Squeaky Beach, Picnic Bay, Whisky Bay and not to forget Tidal River Beach itself. I knew that two days wouldn’t be enough to photograph them all. After scouting I decided to photograph Tidal River beach for sunrise since it was right in front of the campground and it would have been stupid to skip this opportunity. And for the two sunsets we had I wanted to try and get a unique photo of Whisky Bay.

Sunrise the first morning didn’t bring spectacular colors in the sky, but with a long exposure I was still able to create a photo I like. The morning felt very calm, I had the one mile long beach for myself and the blue hour provided just the right color palette to capture this mood. 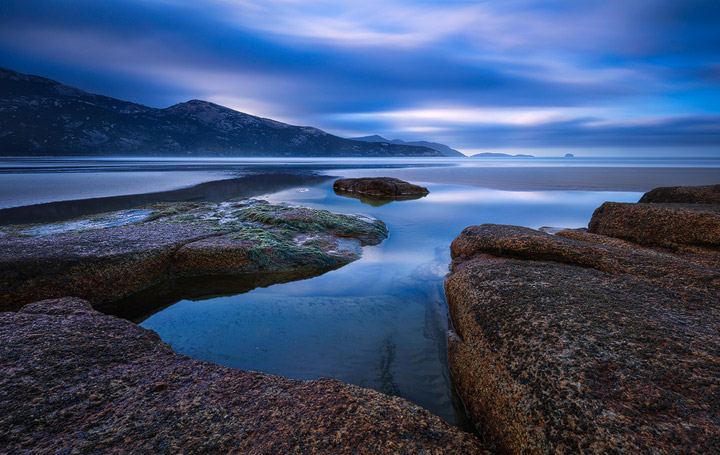 And then there was the last evening at Whisky Bay. It’s hard to describe how intense the light that evening was. While the first evening had been cloudless and I had mainly used it to find the perfect vantage point and composition, this evening now was a repetition of the sunsets at Gibson Steps and Cape Woolamai in its grandeur.

My girlfriend and I were the only people around for the show. So often during our travels through Australia we were alone at a viewpoint or at a beach for sunrise or sunset.

In a time where places like Iceland, Patagonia or the Lofoten Islands seem to be overrun by photographers and Instagramers it’s great that there still seem to be some places where one can enjoy nature’s beauty in privacy. I don’t mind meeting up with other photographers from time to time, but when I see photos of lines and lines of tripods at a beach, I’m glad that we were able to successfully avoid this madness during our travels. 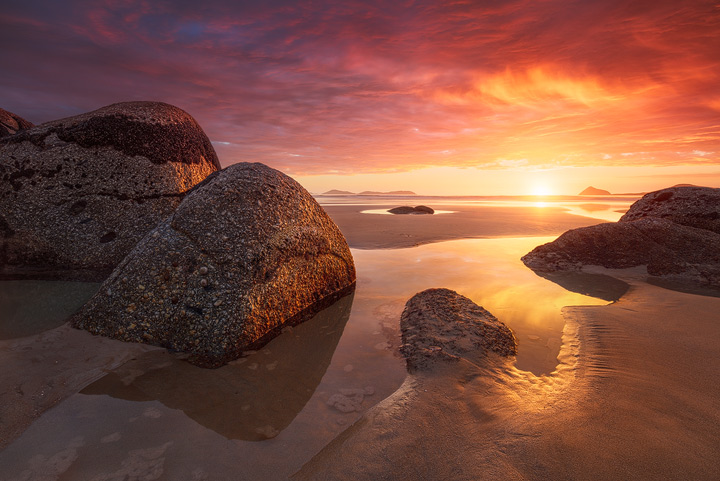 Although Australia was putting on quite a show during the last days of our visit and obviously didn’t want us to leave, after a layover in Melbourne we had to say Goodbye to this wonderful country. With New Zealand being our next stop it was a bit easier, but we were still sad to leave. We will certainly be back in a few years.