Behind the Shot – Bloody Causeway

As a Landscape photographer I have to be patient and persistent. Besides that I also need a good portion of optimism. If I would just head out when the weather forecast is nice, I would miss many special moments. So when I travel I go shooting as much as possible. I usually have only one or two weeks on a trip and I have to make the most of it.

Sometimes, if I catch a great sunset and for the next day the forecast is 100% rain, I might sleep in. But usually there’s an inner restlessness, which drives me out again and again. I can’t remember how many times I stood at a perfect photography location with my camera set up, hoping, longing for something magical to happen. The truth is mostly nothing happens.

But from time to time persistency pays of. In 2012 I was travelling through Northern Ireland and Donegal for one week. If you have visited Ireland you know that in terms of weather everyday is like a toss of the dice. Being an island facing the atlantic ocean, it’s very susceptible to rain. There’s all kinds of rain and bad weather you can encounter. But what I hate the most are those days were it’s a mix of drizzle and rain and the sky is a solid grey wall without any structure. On such days there’s often no wind, which could blow away this monotony.

The day of the shoot

Monday, Juli 23rd was such a day. It was hard to bring up the motivation to leave the B&B. I drove to Glenariff Forest Park to photograph some waterfalls and kill some time. But it was also my last day in Antrim before driving to Donegal and I still haden’t gotten a satisfying photo of Giants Causeway yet. So in the evening I went down to the coast and waited.

First nothing happened. No colors, no interesting light. As sunset approached I had nearly given up hope. My thoughts were already with the next morning, which would be my last chance to capture something worthwhile. But then the sun glimpsed through the clouds for a few seconds.

Five minutes later the sky turned red and I realized that I had completely forgotten to find a good spot for my camera. At least I was in the right location and now with that colorful light in the sky there were suddenly compositions everywhere. I started photographing nothward, not directly into the sunset. The waves were crashing on the rocks and with exposure times between one and three seconds I captured some nice movement. 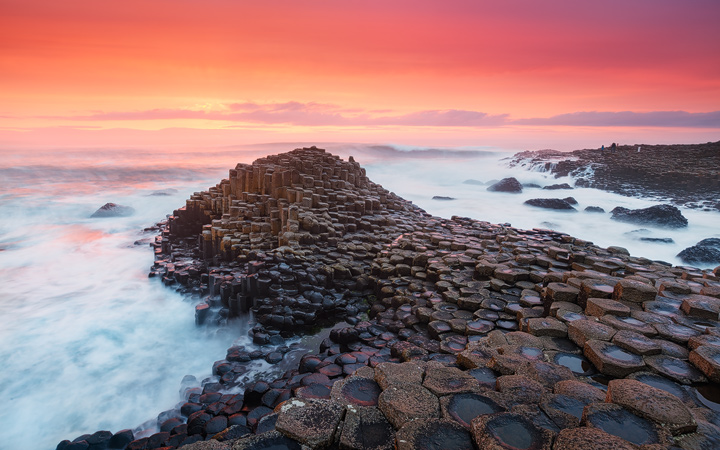 But since the most intense glow was to the north west, I soon changed my position and directed my camera towards the sunset. Here the wet rocks reflected the light even better. The rain of the day had left little pools in many of the hexagonal spires, which now took on the blood red color of the sky. The composition was all about positioning the camera to max the reflections in those pools and to get some nice looking set of foreground rocks, which created a wedge pointing towards the camera.

Technically this photo wasn’t all that complicated. I used a two stop hard* and a two stop soft GND from Lee* to balance the exposure of the sky against the foreground. Then I took two exposures while focussed to the rocks in the middle ground – one exposure slightly brighter than the other to have enough room for play in post processing. Then I set the focus to one of the closer rocks in the foreground to get an exposure for later Focus Stacking. That was it, all in all it took me around 30 – 40 seconds to take this photo. 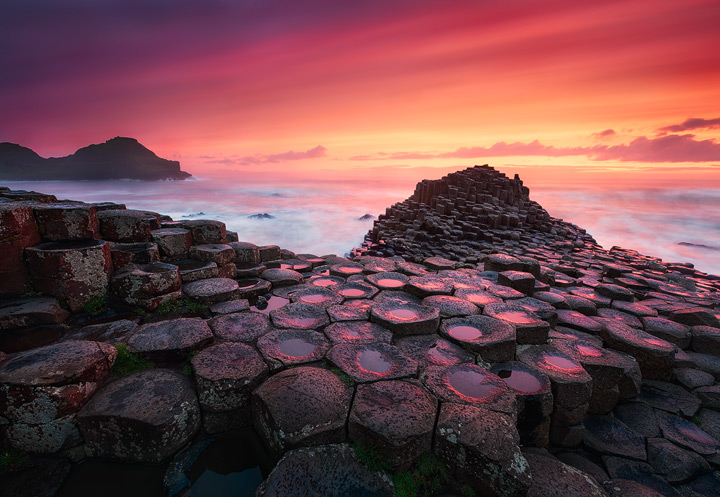 I applied my usual workflow and techniques to this photo during post. First step after bringing all three exposures into one Photoshop file and aligning them was the blending of the two exposures for the background. Here I wanted to gain a bit more detail in the rocks from the brighter exposure while keeping all the details in the sky. With the use of Luminosity Masks this was an easy blend.

It left me with two layers, one for the foreground and one for the background, which I then used for focus stacking. I never use the automatic stacking in Photoshop here. I find the results too random and they seldom work for images with moving water or other dynamic objects. I like to have the control in selecting which parts I use for foreground and background.

So what I did was applying a mask to the upper layer (background) and then drawing a solid black line were I found the transistion of sharpness between the two layers. After I had the line I switched to the mask and filled up the rest beneath that line – the part that was less sharp in the background layer than in the foreground layer.

After the blending I was left with one single layer, to which I applied selective contrast, color corrections, dodge and burn and many other little tweaks. The goal during this more creative part of the processing was to recreate the atmosphere of that evening. I remember it as one of the most spectacular sunsets I have ever seen, I still can recall the joy of that evening, the great time I had when taking this photo. A flat out of camera raw would not trigger those feelings when looking at it. 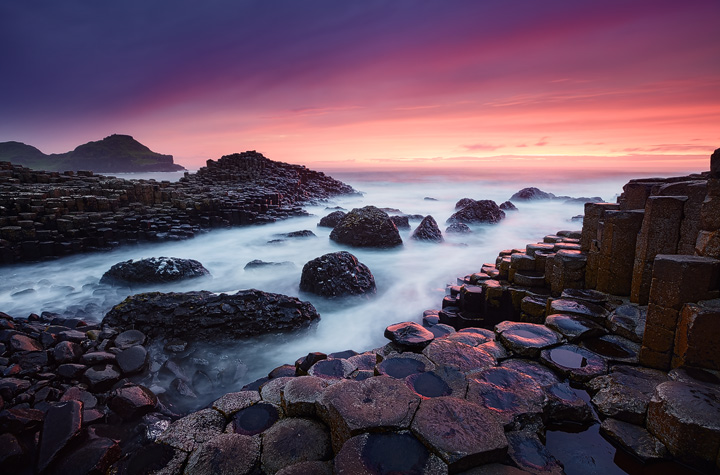 I took a few other photos that evening while the light lasted, changing my position, looking for different angles of the scene. The glow in the sky lasted more than one hour until it faded.

Now nearly four years are gone since that evening and it is still a source of motivation for me wherever I travel and whatever weather I encounter. It’s true that in all those years I encountered less than one hand full of similar light shows. Far more often I was left with a dull grey sky. But I try not to dwell on the failures too much. What counts are those precious moments when nature reveals it’s magic and I’m there to capture it.

* This is an Amazon Affiliate-Link. If you use it to buy something, I’ll get a little commission from Amazon