One of the first things I learned in landscape photography was that selecting a smaller aperture results in a larger depth of field. If I wanted to take a photo that contains elements in the near foreground and a detailed landscape in the middle and background, the obvious formula would be to select as small an aperture as possible to get everything sharp in the frame. Why this might not be the best idea and how focus stacking can help is the topic of this article.

So why is stopping down too far not the best idea? Most Camera-Lens combinations result in a decrease in sharpness for apertures smaller than f/11. This can vary. But what always happens as the aperture gets smaller is that the light that reaches the camera sensor is more and more diffracted at the edges of the aperture blades.

This diffraction causes photos taken with too small apertures to look softer and less detailed than photos taken at apertures between f/5.6 and f/11 for example. So while increasing the depth of field through the use of smaller apertures, the overall sharpness of an image is reduced.

When photographing with a wide angle lens I can still achieve a huge depth of field without resorting to small apertures. The combination of an aperture between f/8 and f/11 with the correct focal point can yield great results. But there are limits, especially with longer focal-length lenses. 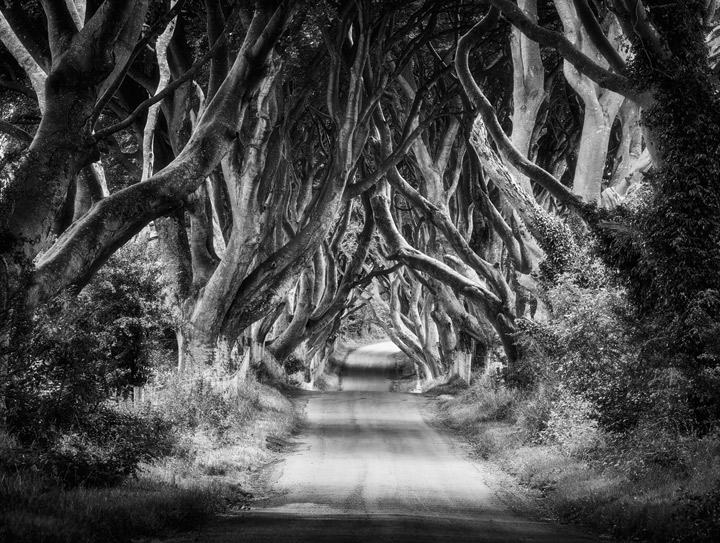 What is Focus Stacking

To overcome these constraints there’s a technique that’s become very popular in landscape photography over the last years. It originates from macro photography where the depth of field is usually very shallow. Here, to increase it, multiple photos of the same scene are taken with different focal points. Those photos can then be merged manually or automatically to a photo containing the combined depth of field of the single photos. This is called focus stacking.

It can be easily applied to landscape photography. While for macro photos often many different photos need to be focus stacked to get the desired depth of field, for landscape photos most of the time I only need two or three photos.

But how do I decide how many photos are needed and where to set the different focal points? It’s hard to provide a recipe that will always work. Focus stacking in landscape photography is largely dependent on composition and on how far the nearest elements in the picture are away from the camera. It also depends on the focal length and the f-stop, that I selected for the stacking sequence.

And maybe the most important aspect: It depends on how I perceive sharpness and what I consider a sharp photo. This is a largely subjective factor. 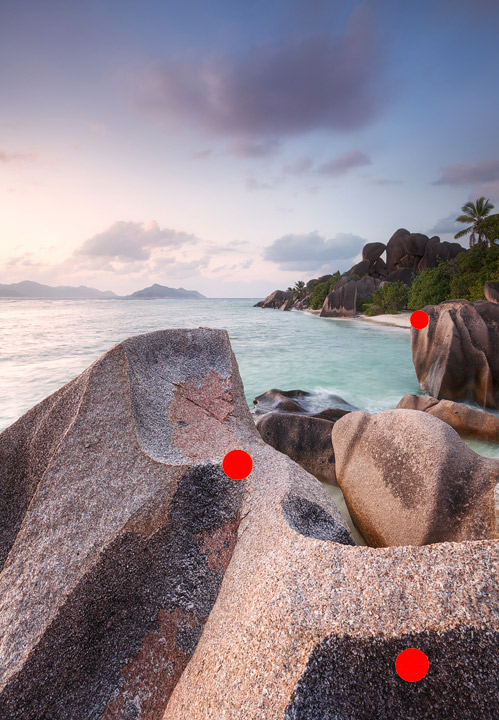 It might start to sound a bit complicated here. But in reality it is very simple. As so often practice is the key to master this technique and to get a feeling for how to do focus stacking in different situations.

For focus stacking to work it is important to use a tripod and to not change the composition or focal length between the different photos. To be able to precisely set the focus Live View is an invaluable tool on modern DSLRs and mirror-less cameras. I usually zoom in 10 times and then manually turn the focus wheel until the focus is exactly were I want it. But with the touch screen on modern cameras you could also just use tap to focus to be a bit quicker.

Using apertures between f/8 and f/11 delivers a good compromise between overall sharpness and depth of field. I need fewer photos than with f/5.6, for example, although this might be the sharpest aperture for some lenses.

Often having a photo for the foreground and one for the background is already enough for a proper focus stacking of a landscape photo. But sometimes the areas that are sufficiently sharp in those two photos don’t overlap. For such cases I either have to move the focal points in the photos closer together. Or I need a third and sometimes even a fourth or fifth exposure focused in between.

My rule of thumb is to always take one more exposure than I think I need. Take for example the photo of Anse Source D’Argent on the Seychelles above. Taken at 16mm and f/9.5 two different focused photos might have been sufficient to get everything tack sharp. But with the fleeting light I didn’t have the time to find the perfect focal points. To be on the safe side I took three images with different focus instead.

Using manual focusing, taking such a sequence can be done very fast and as I mentioned above, if your camera has a touch screen, tap to focus will allow for even faster focus stacking. Some cameras even have an option called automatic focus bracketing, which makes it even easier. And I usually don’t worry about the number of additional photos I create in the field because of focus stacking. After all storage space on memory cards is cheap and for me it’s better to delete redundant photos at home than to realize that I’m missing sharpness in parts of the image. 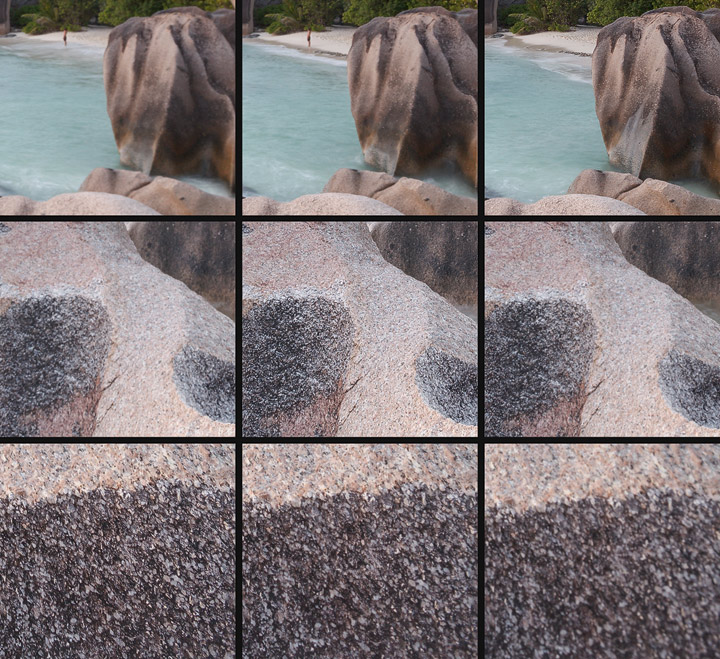 From left to right: near focus, middle focus, far focus

For many scenes stacking the photos in Photoshop or special software like Helicon Focus is very easy. I do it all manually in Photoshop. After aligning the photos, which is important because changing the focus also slightly alters the focal length, I work with masks to puzzle the sharp pieces together.

Problems arise with moving elements, especially in the foreground. Then the photo editing that is involved in the focus stacking can become a real pain and often also requires an amount of retouching in order to fit everything together. 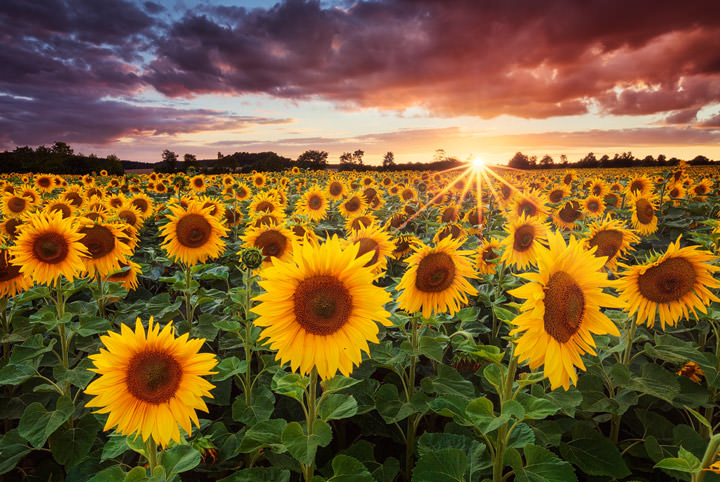 In such situations I experiment with different ISO settings to freeze motion as much as possible. I also need to photograph the focus stacking sequence very fast, which was done for the photo Sunshine above.

If there’s a lot of movement there’s nearly no way to get a convincing result though. Then the compromise is to use smaller apertures. An alternative would be to invest in a Tilt-Shift lens. The tilt of such lenses can dramatically change the area of sharpness in photos. But they are also expensive and have only a fixed focal length.

I hope this gave you a good overview of focus stacking. If you’re now interested in how to put things together in Photoshop, I recommend my Complete Workflow for Editing Landscape Photos tutorial, which is where I go into the details of how to focus stack a photo that involves a huge depth of field with moving flowers in it. 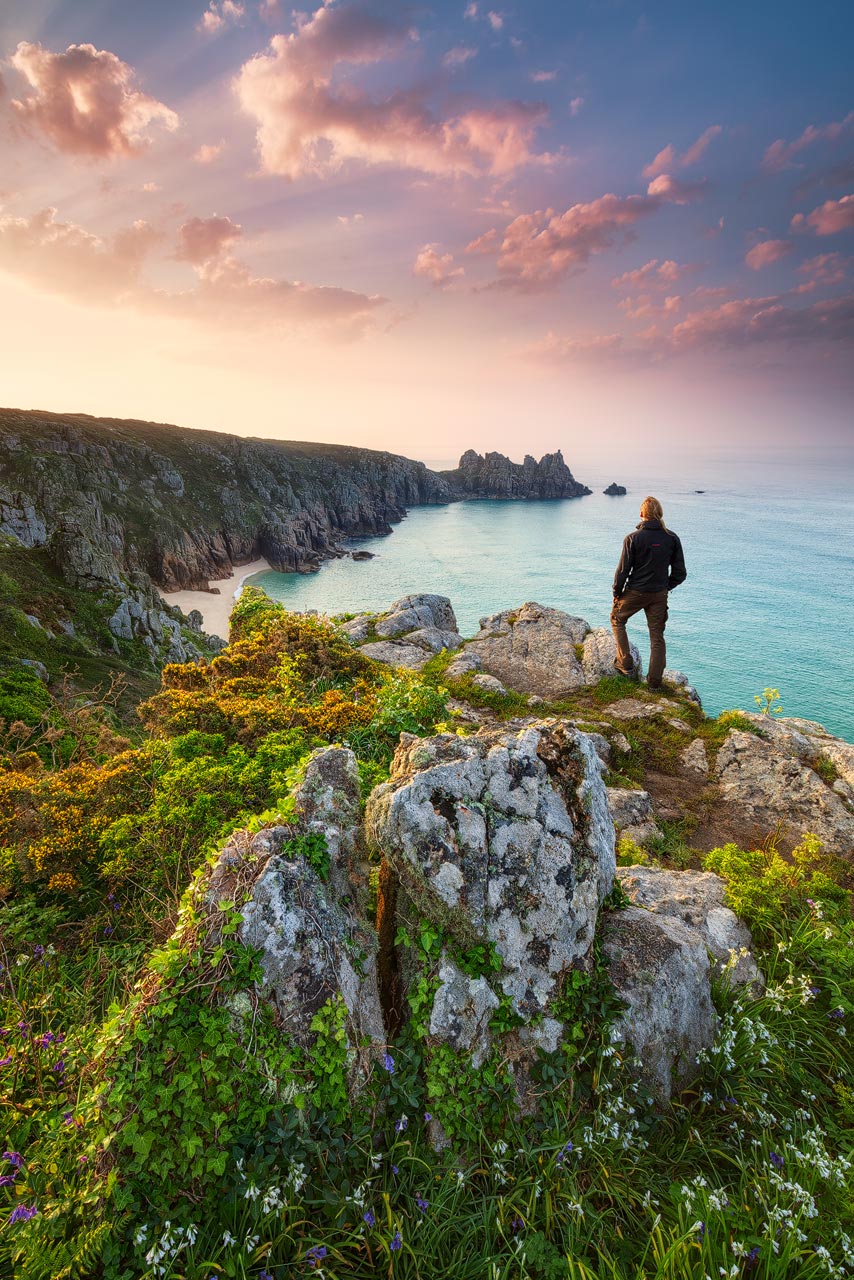