Since a few weeks I’m the owner of a Canon EOS R5. It seemed to be the perfect successor for my five year old Canon EOS 5DSR*: Roughly the same number of megapixels while improving on dynamic range, increasing the ISO performance, adding IBIS, a fully articulating screen and 4K Video. In a nutshell, my expectations were for it to outmatch my 5DSR in any area except resolution and battery life.

In this article we will have a closer look at the image quality of the Canon EOS R5 and find out, if this is true. The focus will be on the photography side – there’s enough talk about the Canon R5’s video capabilities already.

All the image quality tests I did were performed with Raw files, which I trans-coded into DNG files using Adobe’s DNG Converter. From my experience, properly encoded DNG files show the same detail as original Raws, if no lossy compression is used. But it’s possible that later updates to Lightroom will slightly improve on the image quality of the files – I wouldn’t expect too big of a difference though. For some tests I also used Canon’s own DPP software as reference and I found the files didn’t look much different, sometimes even worse.

Due to various sources it was Canon themselves who said in an interview that the Canon EOS R5 would be the highest resolving EOS camera in their lineup. People were speculating that Canon meant by that, combined with the better RF glass, the system as a whole would be able to perform better than even a 5DSR, which has more megapixels.

I happen to have both cameras and I also have RF glass. So I tested that claim, first with Canon’s EF 16-35 f/4 lens*, which is very sharp. Here we can directly compare the performance of the R5 with the 5DSR.

I also took a test shot with the RF 15-35 f/2.8*, which costs three times as much as the EF 16-35. And to be honest, I didn’t see more details with it. It seems the EF 16-35 already has plenty of resolving power to work with a 45+ megapixel Camera, which I already knew from using it for five years with the 5DSR.

Doing some pixel peeping we can see that the Canon 5DSR might still have a minimal edge over the Canon R5, but the gap is small. Considering that the R5 has a high-pass filter, I think the result is remarkable. The image is cleaner, because it shows less moire while maintaining a huge amount of details. 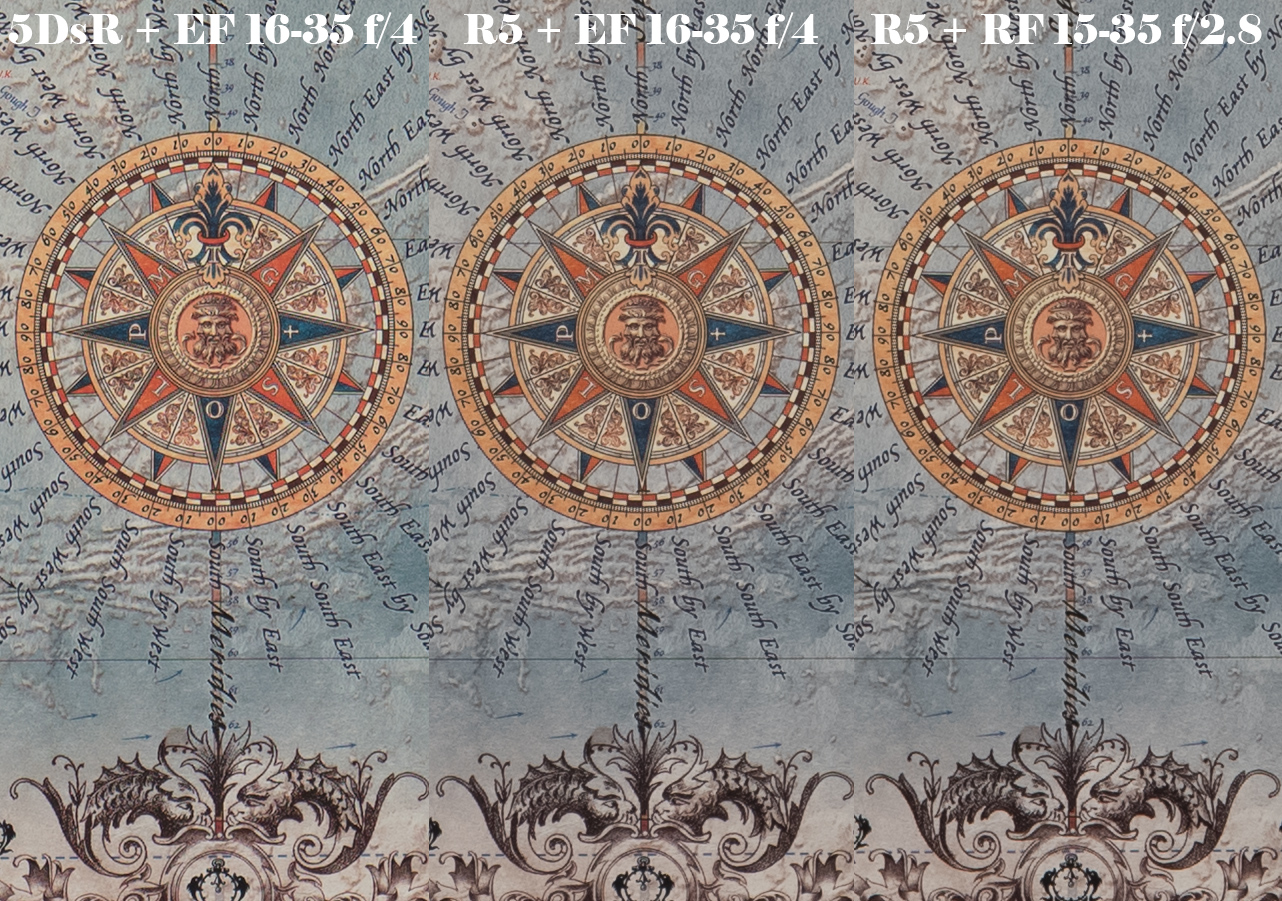 The 100% crop I use for this comparison was taken from the center portion of the test photo to discard any effects the quality of the lens might have. Here we see the sharpest parts of the photos in comparison. I also resampled the 5DSR photo to match the R5 Resolution for easier comparison of the image quality.

Over the past years nearly all camera manufacturers seem to have found solutions to increase the dynamic range in their camera models. Canon was always lagging behind, and not just a little. My 5DSR is up to two stops behind the top performing cameras and even a 5DMkIV doesn't get close to Sony or Nikon.

So how does the Canon R5 perform? I'm glad to say that Canon now also found the secret ingredient for their sensors. From my subjective comparisons the Dynamic Range of the Canon R5 seems to have improved significantly compared to the 5DSR. And based on this data it is now on eye level with the likes of Sony and Nikon.

Through this, exposure latitude is also much improved and it also seems the Canon R5 is now a lot more ISO invariant. It's now possible to underexpose and later, in post processing, raise the exposure without worrying about too much noise in the shadows. Compared to my 5DSR I would say an additional increase of at least 2 stops is now possible. 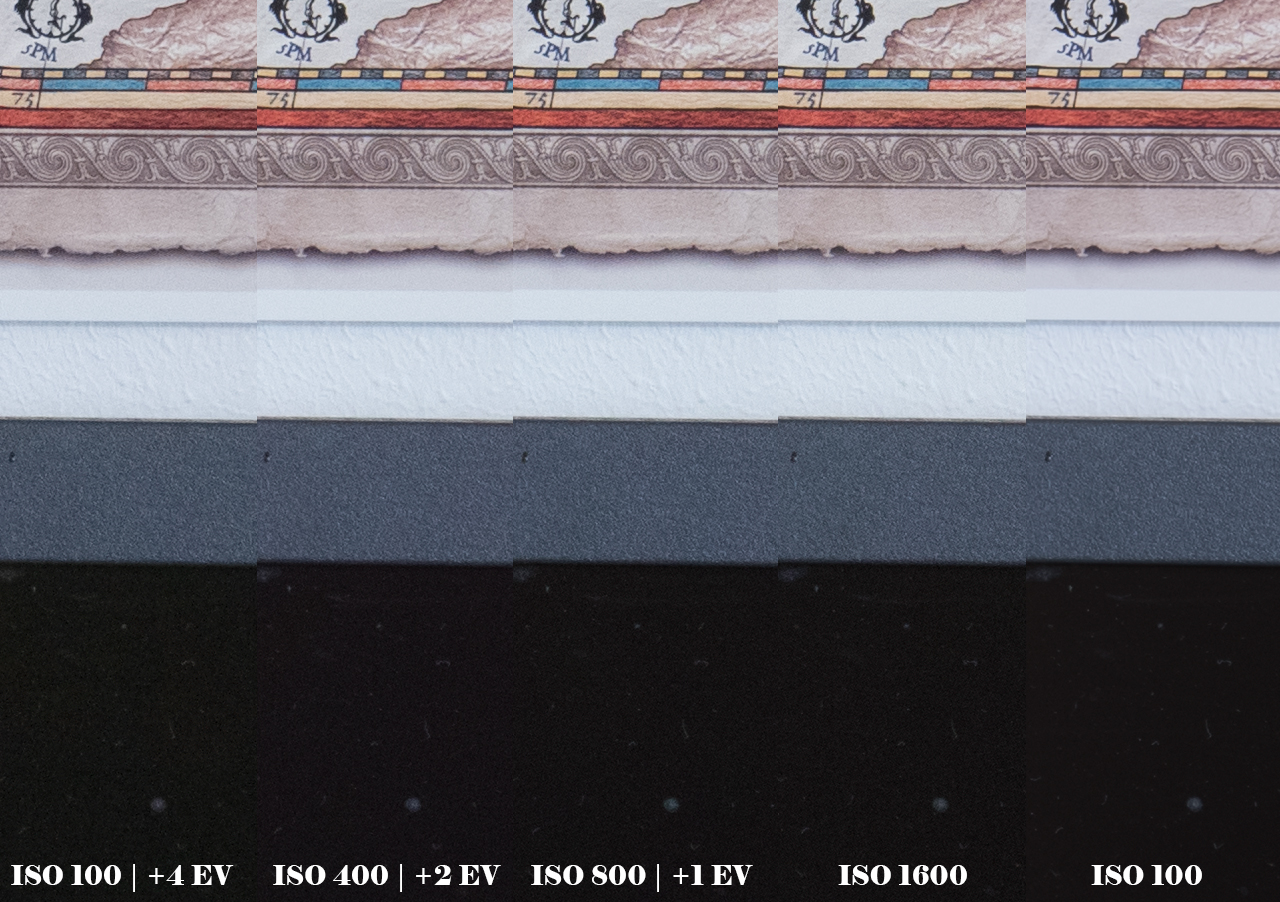 ISO Invariance test, showing that digitally increasing the exposure in Lighroom delivers roughly the same image quality as increasing the ISO in camera.

It should be noted here, that despite the ability to recover shadows during post processing, doing a correct exposure at low ISO, where not too much shadow recovery is necessary, will still give cleaner results. Expose to the Right is still the way to go in order to achieve the best image quality. Combined with the improved dynamic range though, working with images from the Canon R5 in post will be a very enjoyable process.

For more details on how the test was performed and more pixel peeping, you can refer to this video.

Despite the high megapixel count on the R5, it's still a great performer in low light. Compared to the 5DSR I get roughly one more stop – again that's my subjective assessment. Below I have a photo where I compare the R5 at ISO 1600 vs the 5DSR at ISO 800. I down-scaled the 5DSR image to make this a fair comparison.

For me the Canon R5 looks roughly the same in terms of noise, although ISO was increased by one stop. And this trend continues throughout the ISO range. 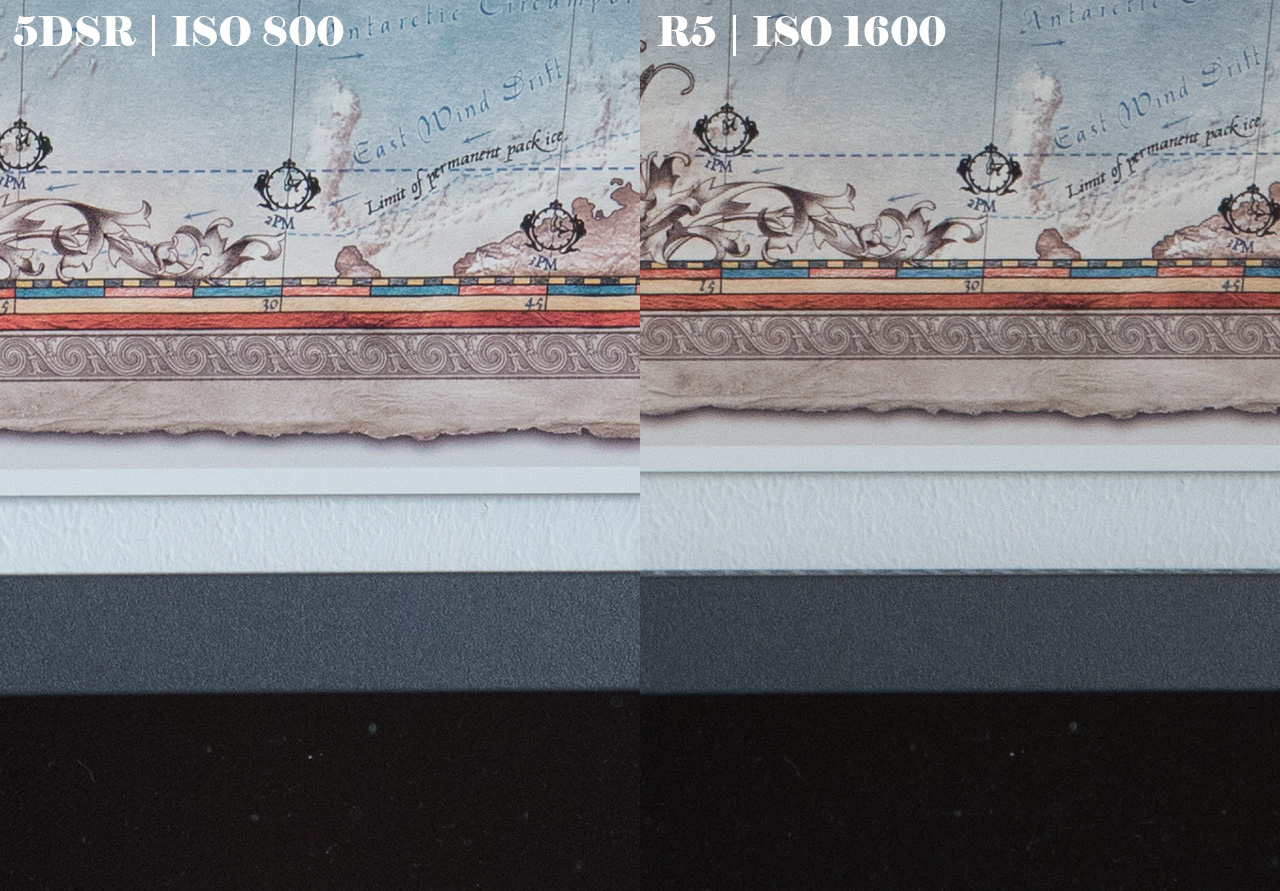 This is great for situations, where I have to freeze motion – for example, when I have moving leaves in a nature scene. Before I wouldn’t go beyond ISO 800 to preserve acceptable image quality, but with the Canon R5 I can now achieve even shorter exposure times.

And also for night photography this improved ISO performance will come in handy. I can now roughly double the brightness of the stars in the image without impairing image quality.

For some more pixel peeping, check the following Youtube Video, where I show some more comparisons and also how the R5 performs at its highest ISO settings.

For me as a landscape photographer it's quite common to start taking photos long before sunrise and to shoot well past sunset. At those times it's pretty dark, with often just a hint of light and color in the sky. By using long exposures of several minutes I can create quite surreal and magical photos during those times. 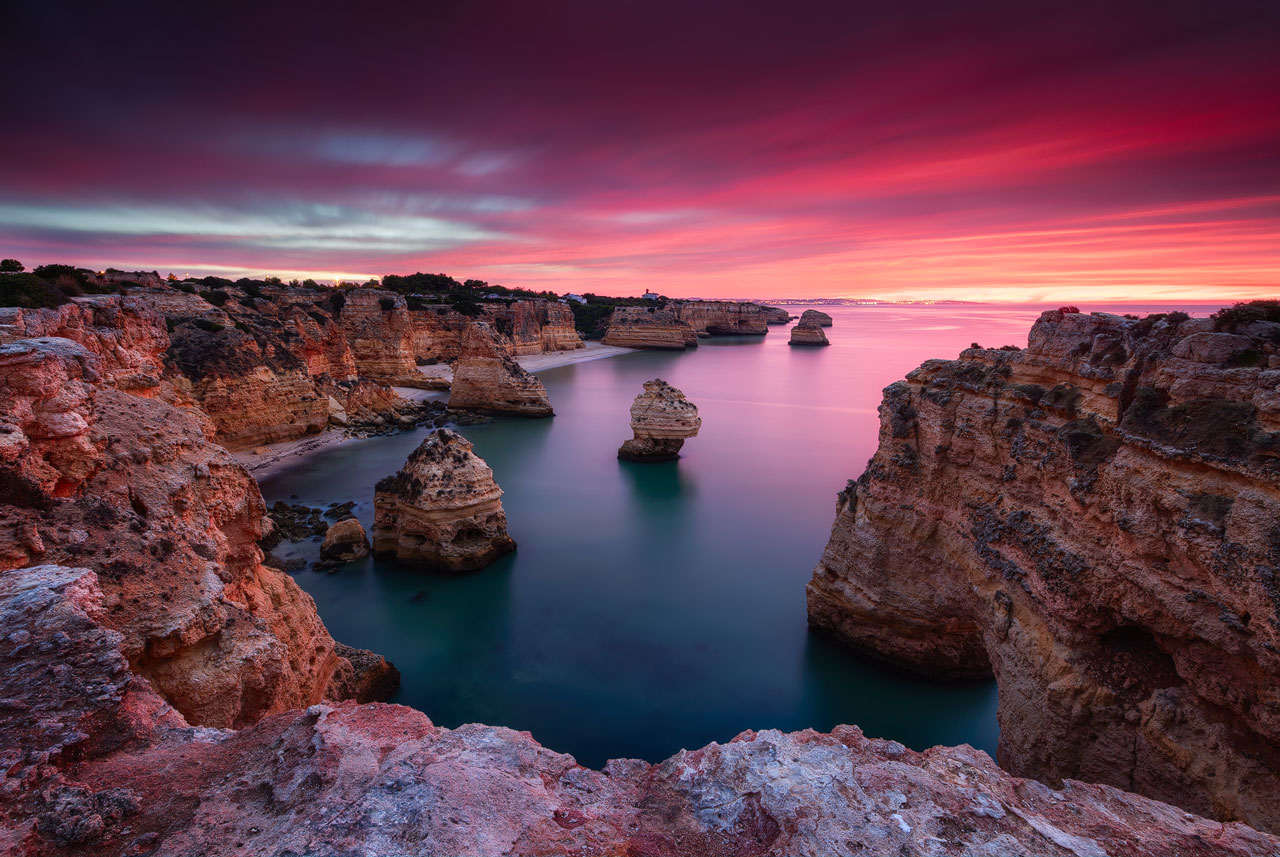 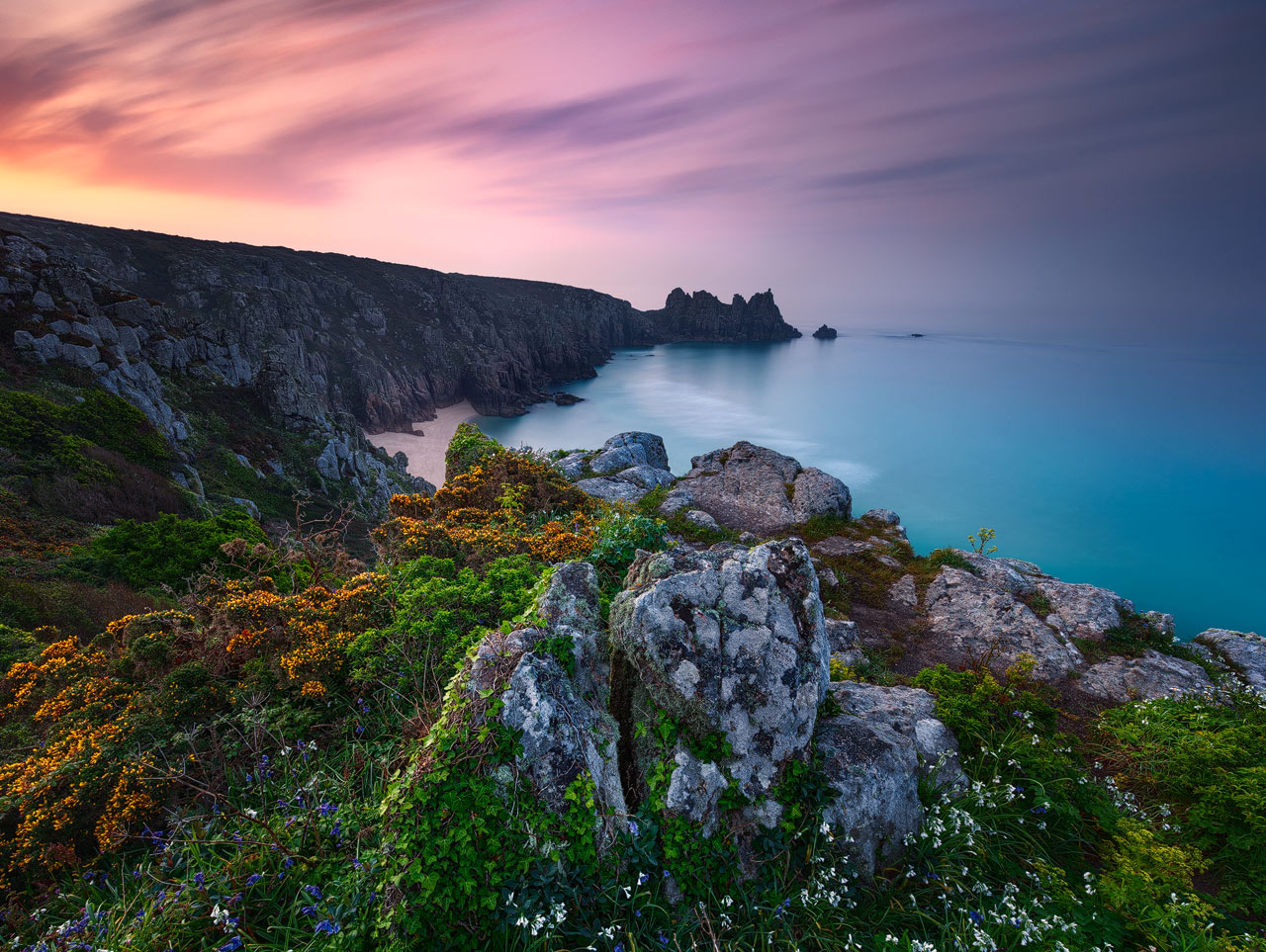 But even at base ISO there can be a problem with noise showing in the images. The longer the exposure time, the more hot pixels appear. For that reason, modern cameras come with a function called Long Exposure Noise Reduction. With this function active, the camera will take an additional dark frame after finishing the main exposure. This effectively doubles the time it takes to create a photo. The benefit is that hot pixels are automatically removed in the process.

Now you might say: Great, just keep Long Exposure NR always active and be fine. But while the camera creates the dark frame, it is basically useless. If suddenly the sky starts to glow even more during sunrise or sunset, I cannot take another photo until the camera finishes its processing.

This is why it is important to have a Camera that can produce clean long exposures, even without Long Exposure NR turned on. With my Canon 5DSR for example it was no problem to take a four minute exposure and not worry about hot pixels. So how does the EOS R5 keep up?

To test it I took photos with the EOS R5, the EOS RP and the 5DSR at ISO 100 with the lens cap on and Long Exposure NR deactivated. This will show how the cameras deal with long exposure noise and hot pixels. In addition I had some other photographers send me photos taken with the Sony A7RIII and the Nikon Z7.

We already heard about the Canon R5's heat problem with video. And I'm sad to say that this problem is also apparent when taking long exposures. The R5 shows by far the most amount of hot pixels of any camera I have tested. Any exposure of more than two minutes will be unusable for me without Long Exposure NR active. 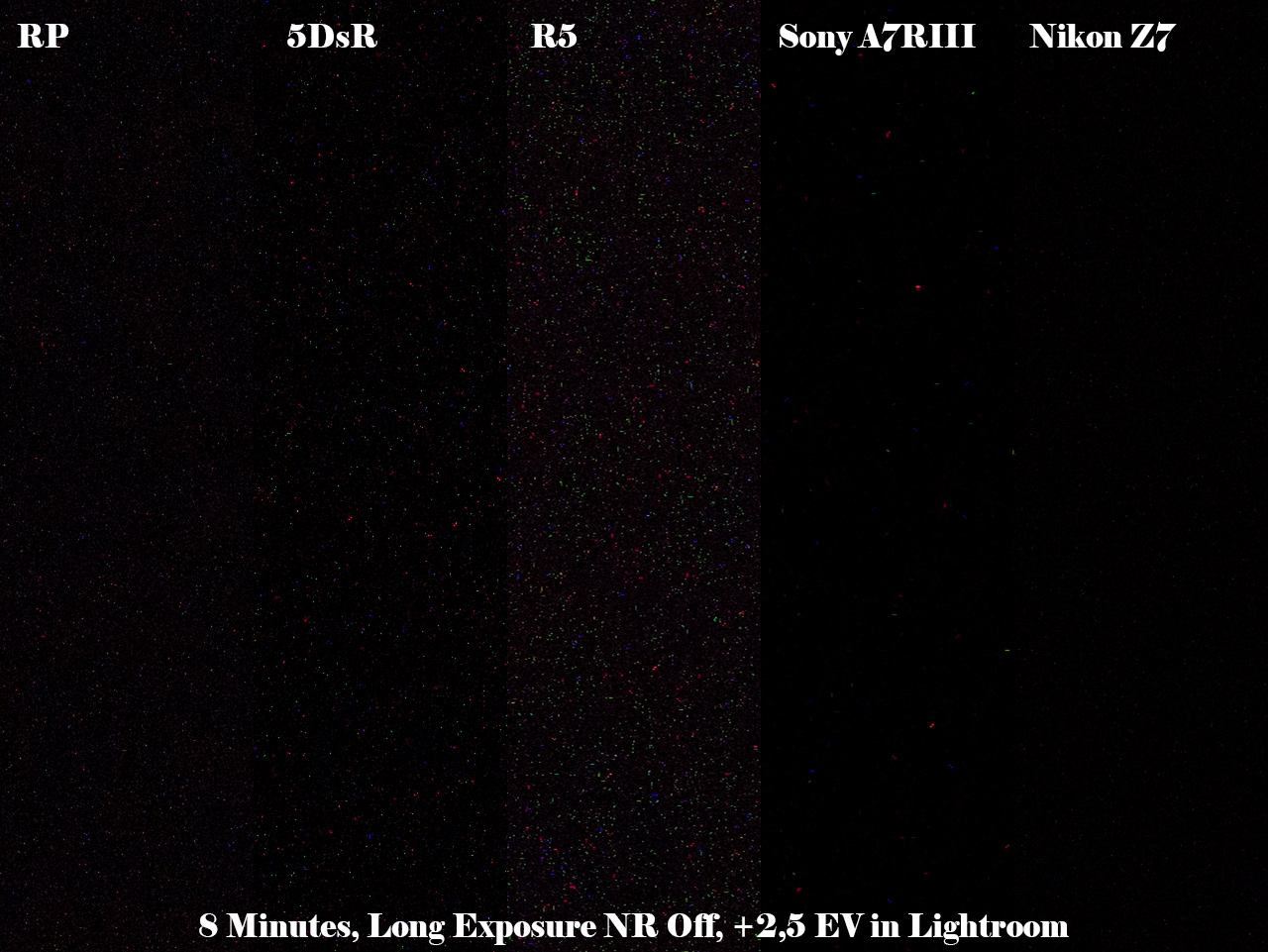 Please note that I raised the exposure in LR to better visualize the difference between the cameras. Generally, you should not do that on such dark exposures and also, many hot pixels might be hidden in a detailed photo. But if you photograph the Night Sky, the hot pixels will show up and considering the fact that the R5 is the most recent of the tested cameras, I expected it to perform equally well. Judging from the sample I got, the Nikon Z7 seems to be a great camera for long exposures.

In the video below I go a bit more into the details of how that test was performed. Please feel free to repeat it with your own camera, if you are interested in long exposure photography.

And I should also mention, that I double checked the Raw files in Canon's DPP software and it looked even worse than after DNG conversion. Moreover I received files from two additional R5 cameras and they showed similar noise. So hot pixels seem to be a common problem with the Canon R5.

I repeated the test where I turned on the camera after having it sit for several hours and directly taking a single long exposure. This one showed much less long exposure noise – still not as good as the other cameras I have tested, but at least the light reddish glow you see in the comparison above was gone.

This is something to be aware of – especially if you take photos around sunset. You usually start with shorter exposures and as it gets dark the exposure times get longer. Unfortunately though, the camera will warm up in the process. This means Long Exposure NR might be necessary even earlier, when taking one minute exposures or less – only time out in the field will tell.

While the Canon EOS R5 brings a lot of improvements and new functionality for photographers, it also introduces some limitations. For someone who is aware of those, I think the R5 can become a very usable camera, which can deliver the overall best image quality in Canon's current camera lineup.

I for myself have now made the decision to keep the Canon R5 and replace my 5DSR with it. The only real bummer for me is the R5's performance during long exposures and for this I have to find workarounds. There are also some software problems, which Canon has to solve. For example, the Interval Timer for Timelapses does not work. Another photographer I know told me that his R5 does not work in more than 30°C and there will surely more such reports pop up in the next weeks. I just hope that Canon will listen and address those issues quickly.

So, if you don't have a preorder in for the R5 yet or are still on the fence of buying it, my advice would be to wait. Just see how things pan out with the upcoming firmware update. And also wait for more real world reviews from the different fields of photography.

As an outlook: Once I have used the R5 in the field for some time, there will be a follow up article and also some behind the scenes videos. For this, make sure to subscribe to my Youtube Channel.