The second part of our long time travel brought us to the Galapagos Islands, roughly 1000km west of Ecuador. From Quito it was a short two hours flight to Baltra, a little island north of Santa Cruz and right in the center of the archipelago.

We had only a short stop there, because on Baltra itself there are no hotels, just the aiport and a military base. Once you arrive you either take the ferry to Santa Cruz or jump onto the next plane, which is what we did. We took a small Islander aircraft operated by Emetebe to Isabela, the largest of the Galapagos Islands.

The alternative to this rather pricy option would have been to take a speed boat from Santa Cruz. But, because in September the waters of the archipelago are very rough, we didn’t want to ruin our start with a bumpy two to three hour boat ride. With the plane it took us just 30 minutes to reach our destination Puerto Villamil in the south of Isabela. 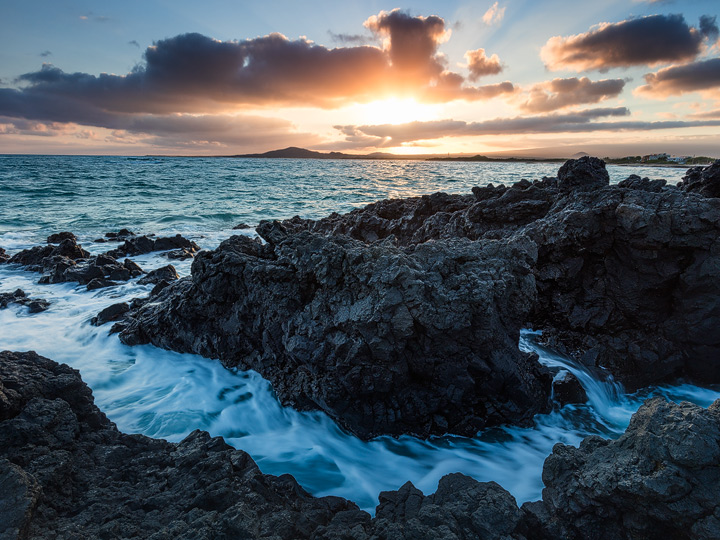 The volcanic rocks at Playa Puerto Villamil during Sunset

We had booked our hotel as usual via Booking.com, but the trips and transfers were organized by Galapagos Alternative. With them we were able to customize our trip in advance and they took care of everything for us, including the transfer between the islands, the transfer to the hotels, they provided snorkel equipment and we always had a local contact. It all worked out incredibly smooth and we will definitly book with them again when we come back in a few years.

On Isabela our contact was Emilie from Galapagos Bike & Surf. She took her time to show us the place, to hook us up with snorkel gear and also met us the following days before our tours. We had to worry about nothing and could fully enjoy our time there, which we already knew would be much too short.

Isabela is kind of a place where we could easily have spent a whole week or longer. The atmosphere in town is very chilled. Puerto Villamil is small, there are not many cars, no bank, no ATM. But there’s a two mile long beach, different snorkel options, marine iguanas and sea lions everwhere, we could explore along the coast for hours or hike up a Volcano.

On our second full day on the island we did the latter. Pickup was early in the morning and we drove around 45 minutes to the Sierra Negra reserve. Up there it was still cloudy and so we started our hike in very pleasant climate with temperatures around 20°C.

But as we reached the top and made our way to the Chico area the clouds cleared and the rest of the day we got scorched by the sun. Not one cloud was left in the sky, which wasn’t ideal for photography. But it was still an awesome experience to walk on the different kinds of lava rocks and to explore the erruption sites. 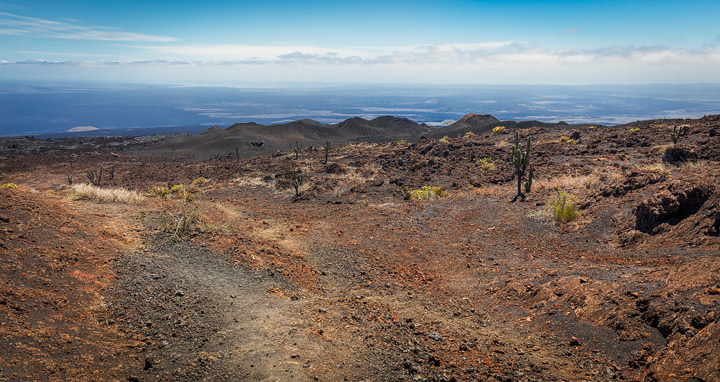 The path to Chico crater

In the evening we went, as usual, to one of the restaurants in the center of Puerto Villamil. Each day I got a menu including soup of the day, some fish or chicken, a desert and a juice for 7,50$. I found those menus to be the cheapest option to eat out on the Galapagos islands. Other options cost roughly the same as in Europe and, if you nead breakfast, lunch and dinner, it quickly sums up.

The day after the Volcano hike we had booked another tour. This time we went by boat to the so called Tintoreras, a set of little lava islands right in front of the harbour. The name Tintoreras comes from the riff sharks, which dwell in the waters around those isles.

The great thing about this tour was that we were the only people on the boat and had our private guide. Normally the tour would have been cancled and we would have had to join one of the later tours because not enough people signed up. But Emilie made sure we got our private tour that day, which was perfect.

First we explored the islands by boat and spotted little penguins, sea lions, sea turtles and blue footed boobies. After a hike to the sleeping place of the sharks, which we could see directly from the rocks above, we went snorkeling. Instead of trying to describe this wonderful experience with words, I’ll show you a little video instead.

I’m normally not so much of a snorkel fan, but this day changed my opinion. Although I should have put on a wetsuit as our guide and my girlfriend did, because after 45 minutes in the freezing water of the bay I was shivering.

We concluded our stay on Isabela with a last stroll along the beach and a sunset shoot at a place I had scouted before. All in all those first days of our Galapagos trip were quite different for me in terms of photography. There were not so many opportunities for landscape photos but endless possibilities to photograph wildlife. This is something new for me, but especially because of all the marine Iguanas it was a lot of fun. They look like miniature Godzillas and it never got boring to watch and photograph them. 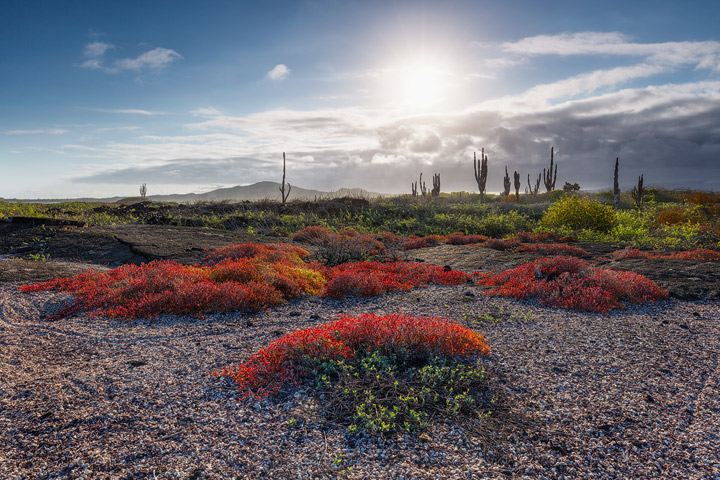 The colorful landscape at the coast of Isabela