In the center of the Galapagos archipelago, right below Baltra, lies Santa Cruz. This island is not as large as Isabela, but it’s much more crowded because most of the visitors to the Galapagos Islands start their trip here. For us it was already the third stop on our travel around the world.

After flying back from Isabela we had to first take a bus to the ferry, then cross the Itabaca channel and finally take a cab to our hotel in Puerto Ayora. Again all of this was organized by Galapagos Alternative, but it’s not overly complicated. Busses and ferries run regularly and the white Hilux Taxis are everywhere on the island.

Puerto Ayora is very different to Puerto Villamil. It’s louder, more hectic and there are much more cars and people. But there are also ATMs again, you have endless options to eat out, many tours to other islands start here – all in all there’s a lot of things to do and again the four days we had were too short. 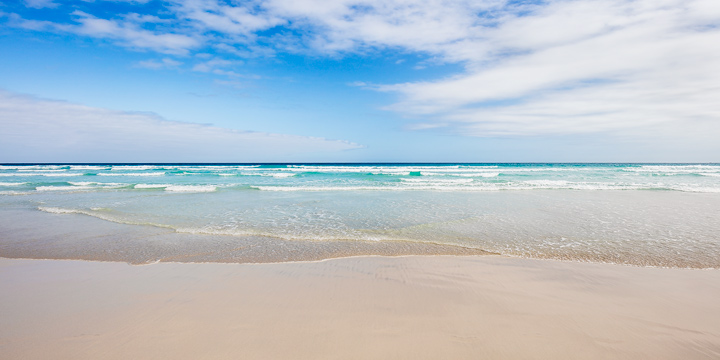 Our hotel was located in the west of town, close to the entrance of Tortuga Bay, which was the first place we visited. Although I liked the beach of Puerto Villamil more I can’t deny Tortuga Bay‘s charms: the fine white sand, the lagoon at the western end where one can snorkel or kayak, or the marine Iguanas and Pelicans that dwell there. Since there was no chance to return for sunset I took a quick handheld photo to have something to show here.

There’s something about nature reserves and national parks in Ecuador that makes it a bit hard for landscape photographers like me. The opening hours are usually somewhere between 6am and 5pm or what I also encountered 8am and 4pm. Upon entering we usually had to register with our passport numbers.

I guess those times were set up to protect local wildlife and we respected them, which also means I have no real sunset or sunrise photos to show from those locations. But especially on Galapagos there were many things I could photography during daytime.

Selection of images from the fish market in Puerto Ayora

One example is the local fish market. We went there twice, on the morning of our second and final day. It’s very entertaining to watch the sea lions and pelicans try to snatch pieces of the cut fish. I used my long lense here and tried to capture some of the action.

We also had booked a tour again, this time a full day boat tour to South Plaza. It started early in the morning with a transfer back to the Itabaca channel where we embarced on our boat, the Queen Karen. Later we were going to snorkel at the edge of the channel but first we made the 90 minute crossing to South Plaza.

South Plaza is actually a set of two islands and one of them can be explored by foot. In the two hours we walked the island we saw and photographed lots of land Iguanas, which unlike the marine Iguanas have a more yellowish, orange color. They are also a bit smaller. But what both species have in common: they like to relax on large rocks or beneath trees or cactus. This made it easy to photograph them.

While we walked along the shore we also came across several sea lions again, and I finally got the chance to photograph some oft he red rock crabs up close. We had seen those already during our trip to the Tintoreras but this time I was able to get much closer. 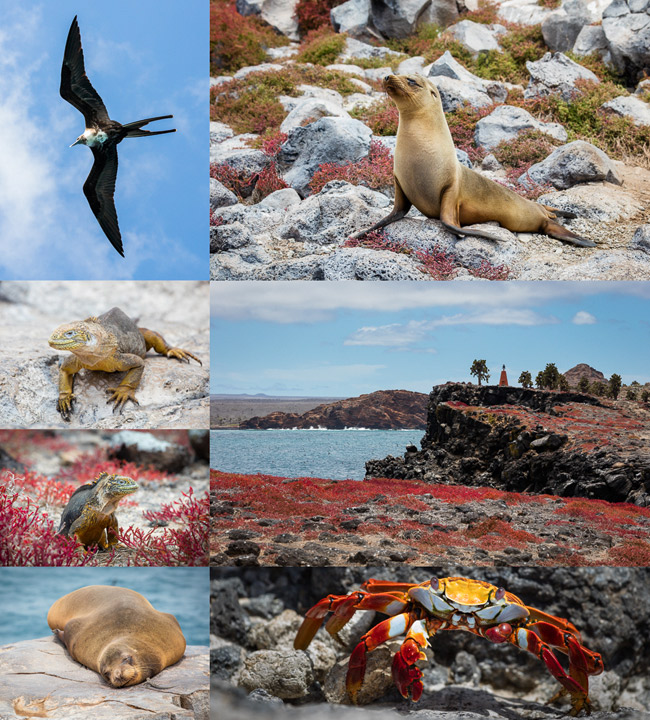 Photos taken during a tour to South Plaza

We concluded our trip with some snorkeling in the Itabaca channel and this time I was smart enough to wear a wetsuite, because again the water was freezing in places. With the sun out the sight was awesome. We encountered a sea lion, which this time wasn’t as playful as the little ones on Isabela, I saw a riff shark and lots of other colorful fish I don’t know the names of.

After those packed first days on Santa Cruz we could have used some time to relax, but there was still so much to see. On our last day on the archipelago we visited the giant Galapagos Tortoises in the El Chato reserve. A few years ago we had seen some giant turtles on the Seychelles already, but to me the Galapagos Tortoise seemed even larger. In the reserve we were able to walk around on our own, which made it the perfect photo opportunity. 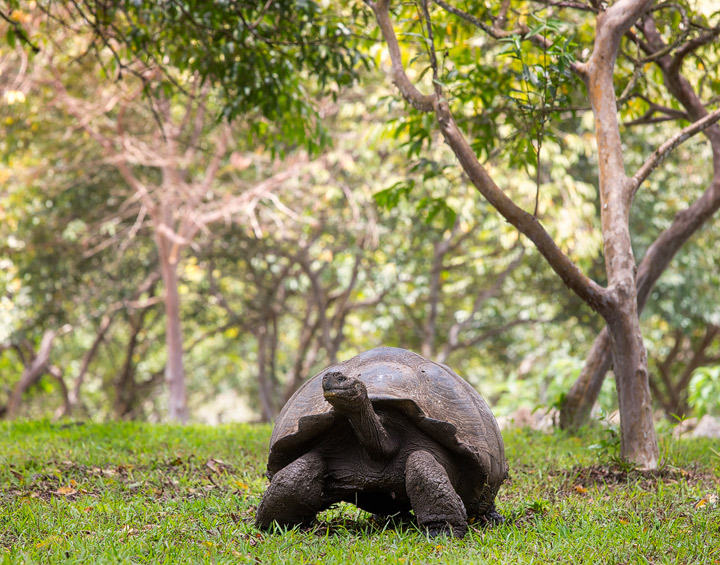 A giant Tortoise on its way through the El Chato Reserva

After visiting El Chato we went to the eastern part of the island to visit Garrapatero beach. As we arrived around 2pm the beach was very crowded, mostly by locals. The sun was out and it was hot. But it didn’t need more than a few dark clouds obscuring the sun for an hour or so and for the wind to pick up and suddenly we were the only people there. Even the park rangers had left.

It was the perfect spot to conclude our Galapagos adventure. Even the weather cooperated and an hour before sunset the sun appeared again. I found a spot with some sleeping Iguanas and one of them fit perfectly into the composition I had set up. He didn’t care at all about my presence and as we left he was still chilling on the lava rocks. 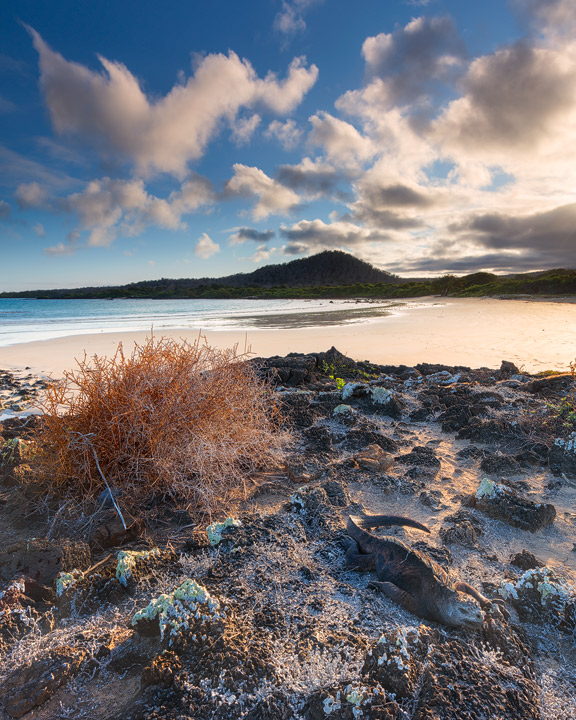 A marine Iguana relaxes on the warm lava rocks at Garrapatero

The next day we had to leave the Galapagos islands again, heading to the next location on our itinerary list. But we are already certain that it wasn’t our last visit to this beautiful archipelago. There’s still so much to see, so much to explore and on our next visit we’ll certainly bring more time.