It's time for some more waterfall photography from Costa Rica. A few weeks ago, while travelling through Costa Rica's north with our rental car, we made a two day stop in the Bajos Del Toro area, which is situated in a valley between the two massive volcanos Poas and Viejo. In these central highlands you find a huge variance of waterfalls, some of which are easy to access, some of which require strenuous hikes. In this article I give you tips on photographing some of Bajos Del Toro's best waterfalls.

Exploring this area was certainly one of the highlights of our Costa Rica travels so far. After visiting the Colombia River Gorge in the US several years ago, I hadn't been to an area with such a large waterfall density. Bajos Del Toro has countless waterfalls to offer, of which some have just recently been made accessible.

With so many cascades in the area it wasn't easy to choose. Two days were certainly not enough and I would have loved to spend more time doing landscape photography there. But then again, Costa Rica has so much to offer and it's important to find a balance between all of its attractions. 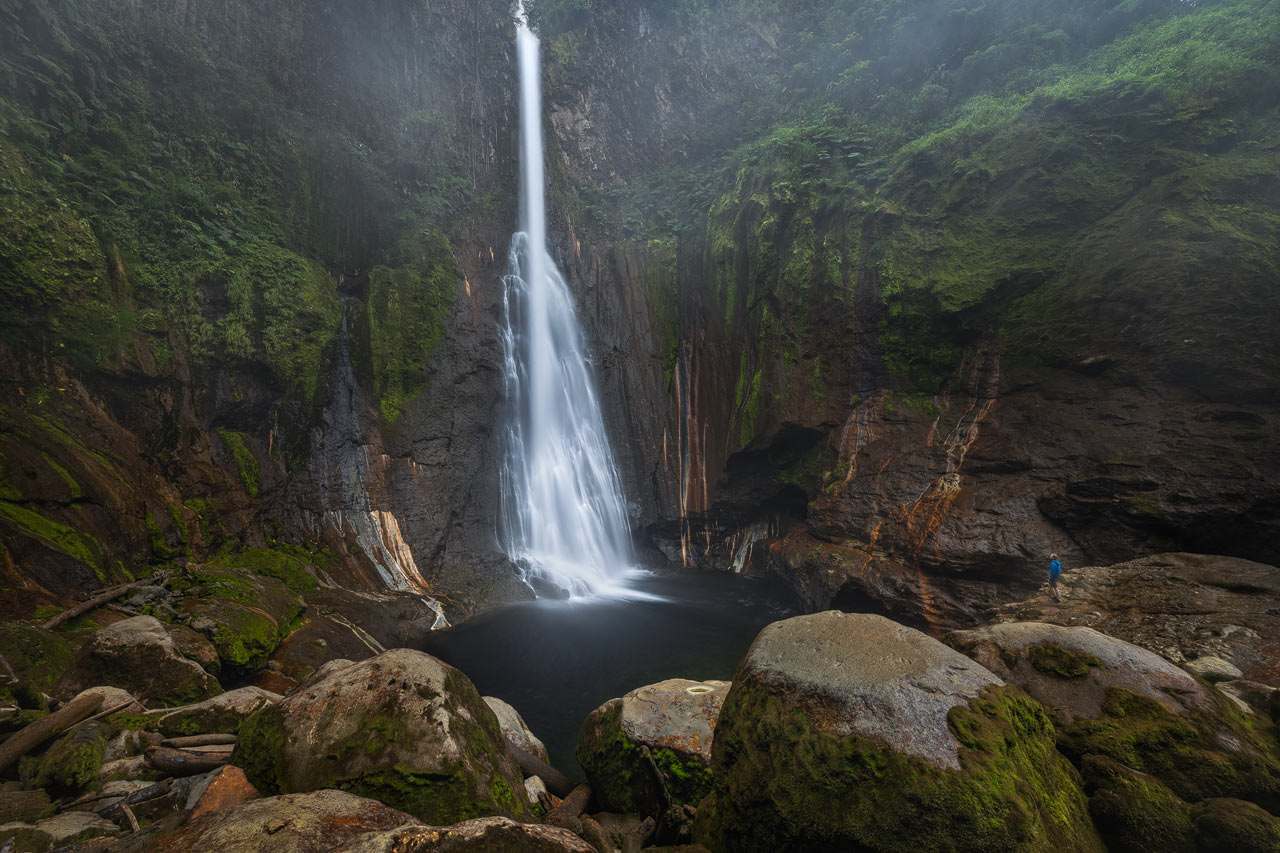 How To Get To Bajos Del Toro

Before we get to the waterfalls, I want to share how to best visit Bajos Del Toro. From my previous articles you might know that we had been travelling along Costa Rica's pacific coast by bus. This is not an option, if you want to visit Bajos Del Toro. This area, although it's quickly gaining popularity, is still a bit off the beaten path. None of the major bus companies offer transport options there yet. From either Grecia or Zarcero you'd need to take a taxi, which can be quite expensive.

With a rental car on the other hand it's easy to visit. You can make the drive either via Grecia or Zarcero. If you are coming from San Jose Grecia is the quicker route and it should take no more than two hours to get to Bajos Del Toro.

Since we were staying in Zarcero we made the trip over from there twice in two days. It's a very scenic drive over the mountains with beautiful views along the way. Only the last few kilometers are unpaved, but in good condition. The road from Grecia is completely paved as far as I know.

But even a paved road in Costa Rica can mean uneven terrain. Expect potholes of increasing size and frequency the closer you get to Bajos Del Toro. In general a SUV or Jeep is the preferred option to explore Costa Rica by car, if you want a relaxed time. But you can certainly make it to Bajos Del Toro in a regular rental car.

Bajos Del Toro is a small town surrounded by beautiful landscapes and mountains. There are several hotels and Airbnbs in the area to choose from. Whatever place you are staying at, there will be a waterfall just a short drive away.

Since we wanted to meet up with some friends who were travelling through Costa Rica by bus, we made Zarcero our homebase though. Because of the reasons mentioned in the previous chapter, it was easier to meet up there and then do the 40 minute drive to Bajos Del Toro in our SUV together. From Zarcero it was also easy to continue our travels to La Fortuna afterwards.

In Zarcero we rented a beautiful Airbnb in the mountains. For 120 USD a night this was a great option, because we were able to split the cost with our friends. Normally this would have been far beyond our budget. Having such a luxurious house as homebase made the larger distance to the waterfalls certainly more bearable.

The obvious waterfall to visit is the mighty Catarata Del Toro, which is shown in the first photo of this article. This 82 meter cascade has a very special aura. Standing at the base of these falls makes you feel as if you're in Jurassic Park.

Photographing this waterfall wasn't easy though. There are various viewpoints along the way down to the base, but to really show the massive size I wanted to get up close with this monster. Down in the crater there's a constant biting spray caused by the acidic waters of the cascade and a large lens cloth is a must to keep the lens clean during the shoot.

What is also required is a wide angle lens. 15mm were just enough to fit this waterfall into a horizontal composition with some foreground. I also included myself in the photo to provide some sense of scale. But despite all my efforts, it's still hard to do this waterfall justice.

And not only the waterfalls are huge in Bajos Del Toro. The plants also grow to formidable sizes. I took this as an opportunity to take some macro photos with my 15-35mm lens*. Because of the size of the leaves of the poor men umbrella I didn't need a macro lens to get a photo of its details. 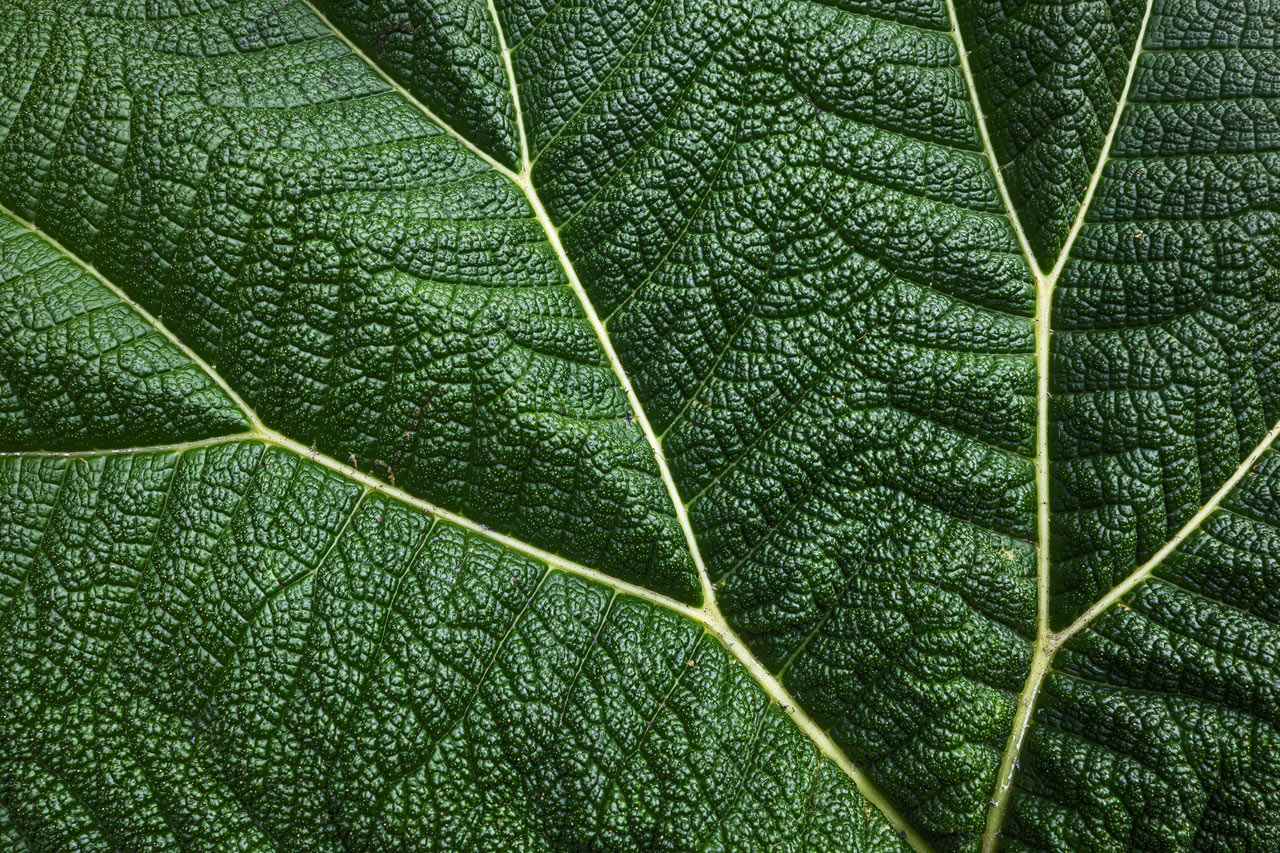 In terms of weather, I would certainly head there on an overcast day, even rain is fine. Bright sunlight on this waterfall would make it hard to photograph in my opinion. So staying in the area a few days might be a good idea to remain flexible. Because there are other waterfalls that work better in sunshine. And that's the exiting part about Bajos Del Toro. The waterfalls are all different and work in different conditions.

One thing to be aware of when visiting Bajos Del Toro and nearly every other area in Costa Rica: Nearly nothing is free. And so there's a price to visiting Blue Falls and the Catarata Del Toro. For 25 USD we bought the combo ticket, which allowed us to first do the guided tour to some of the blue waterfalls and later visit Catarata Del Toro, once the clouds had moved in.

The clouds were actually so quick to arrive that once we got to the Tepezquintle waterfall – depicted above – the sun was already hidden. But still the color in the pool beneath the veil of white looked beautiful.

Visually my highlight was the Catarata Rio Agrio, which we visited the next day early in the morning. Same as nearly all waterfalls in the area Rio Agrio opens at 7am. And it's good to be early, because this place as well as the others can get crowded as the day progresses.

What we noticed during our 30 minute hike to the waterfall were the massive constructions going on to make this waterfall even easier to access. I had seen videos from about 5 years ago, when bushwhacking was still required to get to this beauty. Now there are wide pathways, stairs and bridges that are readying this place for the masses.

This is sad to see, because it takes away a lot of the natural beauty of this place. We noticed a similar development at Blue Falls. Only for Tepezquintle river crossings were still required and I guess in a few years there'll be bridges all the way. 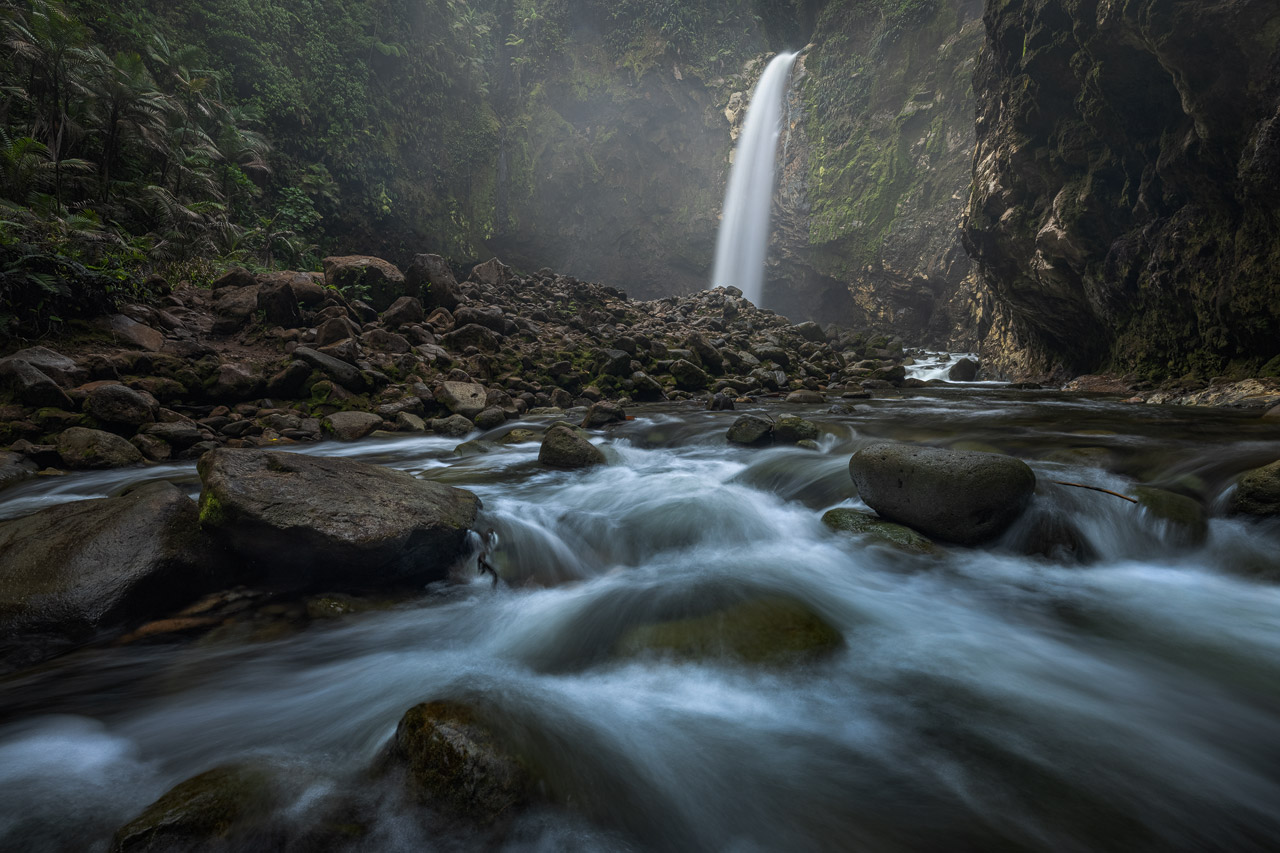 The waterfall is still beautiful though once you find the right perspective. Down in the acidic waters of the river I found some beautiful foreground and a perspective that excluded the benches in front of the waterfall. The 4000 Colones – roughly 7 USD – entrance fee were well worth it.

While the waterfalls I showed you in this article don't require an adventurous hike to get to, there are also some more remote waterfalls in the valley. With more time I would certainly have made the hike to Catarata Vuelta del Canon, which also looks beautiful and still seems to require some serious hiking.

Also, as I say in the video below, don't postpone a visit to the area of Bajos Del Toro for too long. The development that is done around nearly all the waterfalls in the area is a clear sign into which direction this place is heading. Although it might not get as crowded as La Fortuna in the short term, its adjacency to San Jose will certainly make this place more busy in the coming years and the construction will take away more and more of its natural beauty.