Because we also wanted to see what Dominical has to offer we switched locations. We planned to stay in Dominical for three nights. This would give us enough time to figure out how to get to Nauyaca and when to photograph it. 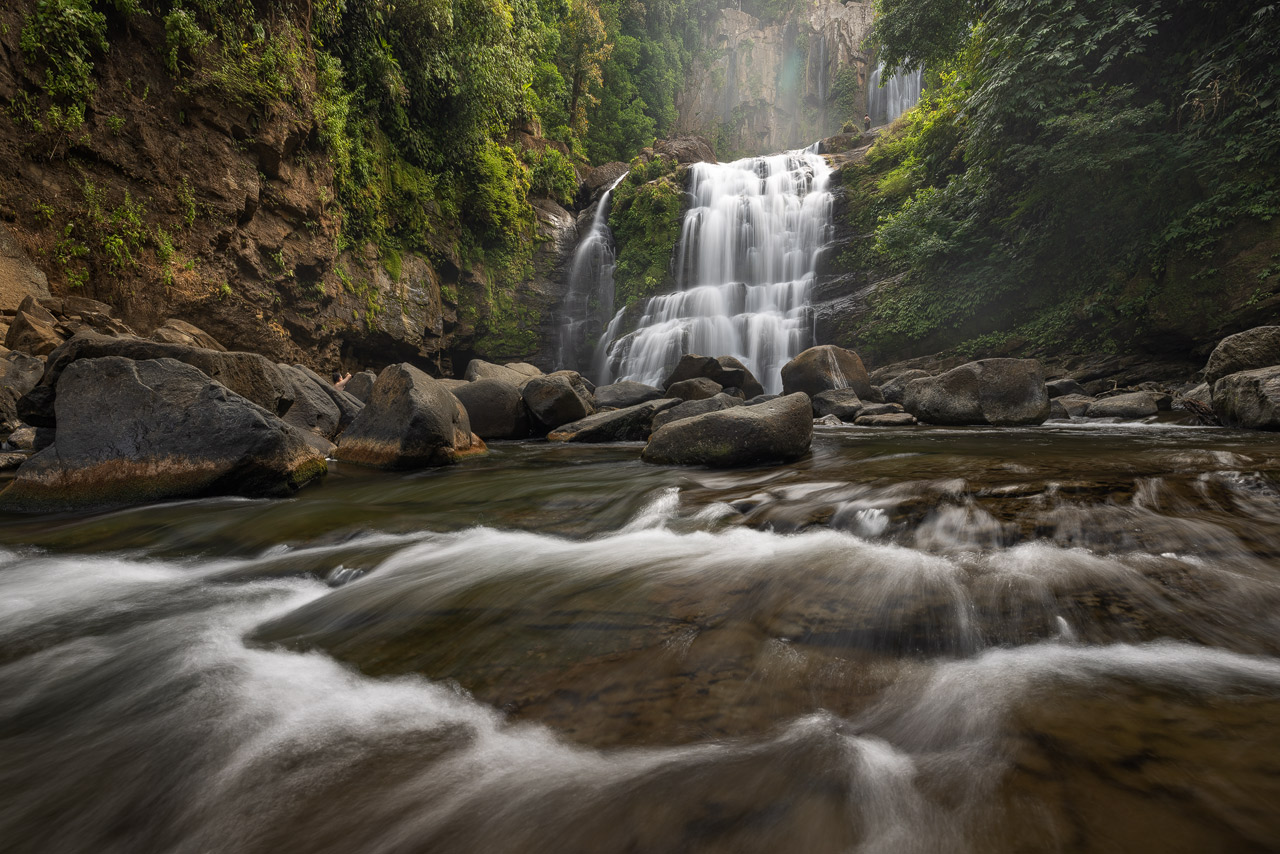 How To Get To Nauyaca

The easiest way to visit Nauyaca is by rental car. There is a large parking lot at the start of the hiking trail and the road there is completely paved. If you have a car and want to visit, best make a reservation at least a day in advance, because it can get crowded at the waterfall.

I'm not 100% sure, if you need a reservation for the hike, but best be on the safe side and reserve your spot, since you don't need to pay right away and will do so later upon arrival at their office. If you want to do one of the tours – horse tour or 4×4 tour – a reservation is required. Also it should be noted that the tours are slotted. They leave at certain times and you get only limited time at the falls. 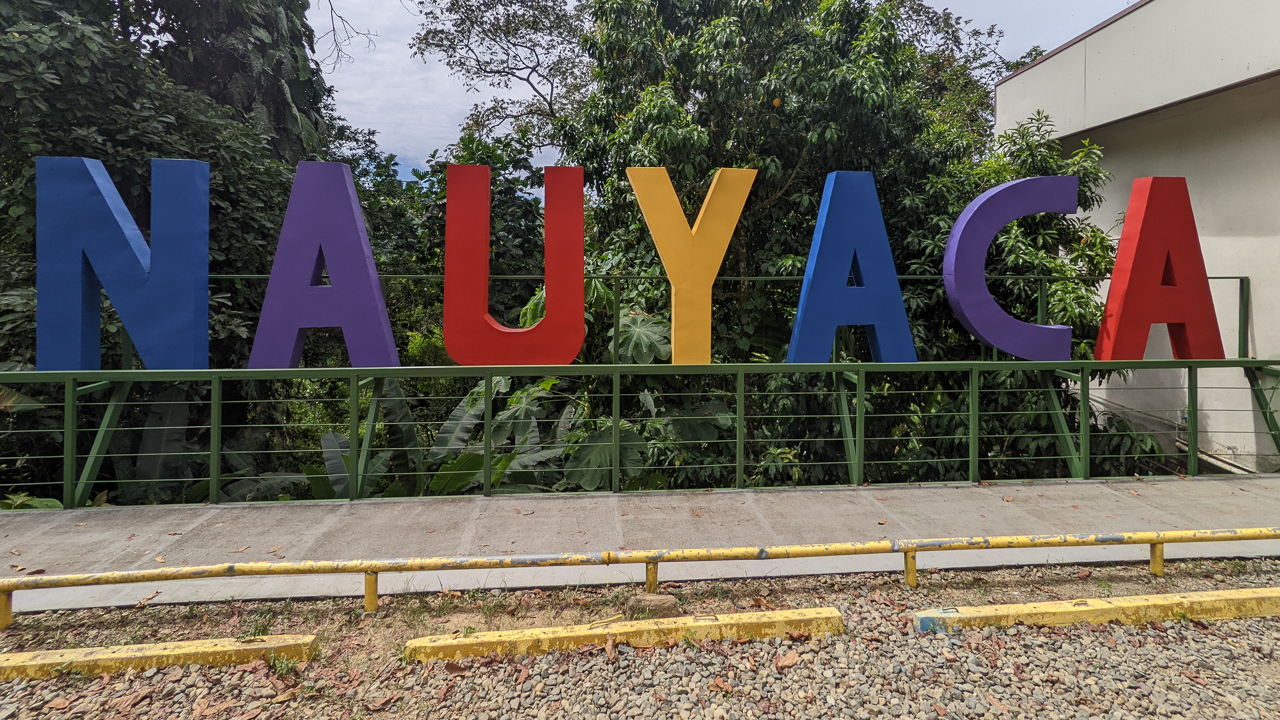 Since we didn't have a rental car we had two options. There's a bus stop in Dominical where we could have caught a bus heading into the direction of San Isidro. Unfortunately at those bus stops there's never a time table. And the people at the reception of our hotel, the Hona Beach, could also not provide any information.

Because I wanted to head to the falls as early in the morning as possible – they open at 7am during the week and on Saturdays, and at 8am on Sundays – I didn't want to risk heading there by bus and possibly arriving late. That's why we bit the bullet and took a taxi, which was quite expensive. You pay anywhere between 16 and 20 USD for the ride to Nauyaca. For a 15 minute drive this is a bit ridiculous, but in a tourist destination like Dominical quite typical.

No matter if you head to Nauyaca by bus or taxi, you have to be aware of one thing: The office where you get your ticket and pay the entrance fee is up at the street next to the bus stop. If you take the bus there and plan to do the hiking tour, you first have to walk down a steep road to the trail head, which is about 1.5 kilometers away from the Nauyaca office. If you take a taxi, make sure to negotiate with the driver to take you to the trail head after you payed your entrance fee.

Heading back to Dominical by bus is much easier, if you are able to be back at the bus stop next to the office by 12pm, which is when a bus from San Isidro is usually passing by. The bus costs only 1 USD per person.

Many attractions in Costa Rica have opening hours and it's seldom possible to access those around sunrise and sunset. This means that upon arrival at such attractions the sun will be out. Especially when photographing waterfalls, it's important to know when the first rays of the sun touch the water. Once this happens it becomes very hard to take a good photo because of the harsh light.

For Nauyaca the sun rises behind the waterfall and then takes about two hours to climb over the hills that surround it. We were there on a Sunday and arrived at the waterfall at around 8:30am. By then the sun was already high enough in the sky to bath the foreground rocks in warm light. Thankfully the waterfall was still in shade and there were also still some lighter clouds in the sky to soften the light. 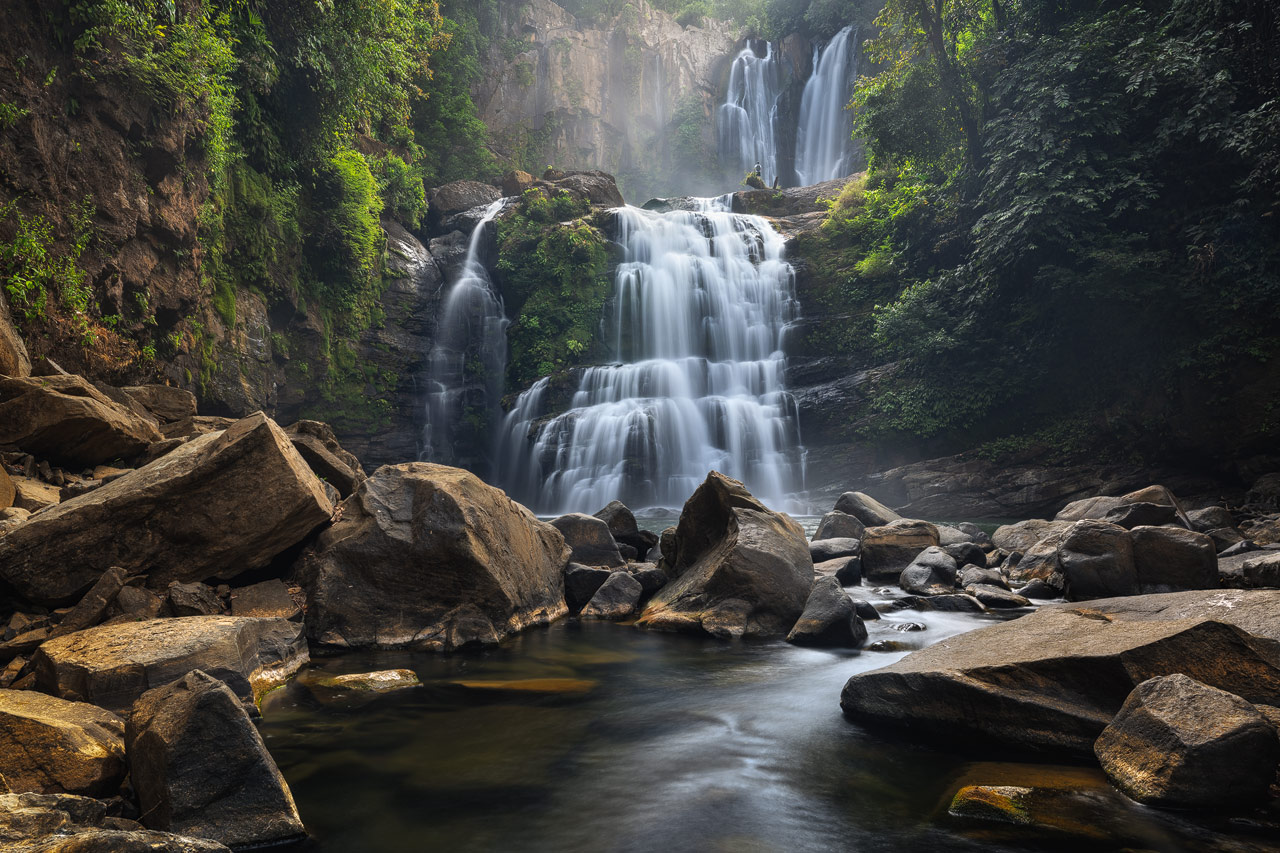 I think a much better option for a visit would be during the week and directly at 7am – you'd encounter less people and have more shade to photograph the waterfall.

Late in the afternoon the sun will at some point again be low enough in the sky for the trees and hills to provide shade at the falls. But the park already closes at 4pm, which is the time when you have to have completed your hike back to the trail head. Last admission for the hike is 2pm.

We visited in late January at the beginning of dry season. At that time it still rained quite often during the night and was dry during day. The falls had the perfect amount of water then. I think heading further into dry season there might be less and less water and the falls will at some point certainly less impressive.

As for wet season I can only judge based on the photos I have seen. If there’s too much rain the water can become brownish, which doesn’t look so photogenic. Also there will be much more water rushing down the river and corssing it will no longer be possible. The vantage point from which I took my photo is right in the middle of the river. This area would most likely be submerged during rainy season or at least dangerous to get too.

Quickest Way To the Waterfall

The hike to the waterfall from the trail head is about 3.5 kilometers long. I had read that it's five kilometers, but that's the length of the road that the 4×4 tour takes. The hike includes a few shortcuts though, which I didn't know. For 10 USD it's the cheapest option to visit the waterfall.

If you want to be the first person to arrive at the falls though, you'd have to really pace through the hike, because there's a 4×4 jeep tour available for 32 USD. Into such a jeep they fit up to 10 people and those are the ones who get to the waterfall first, because the jeep takes less than 30 minutes. 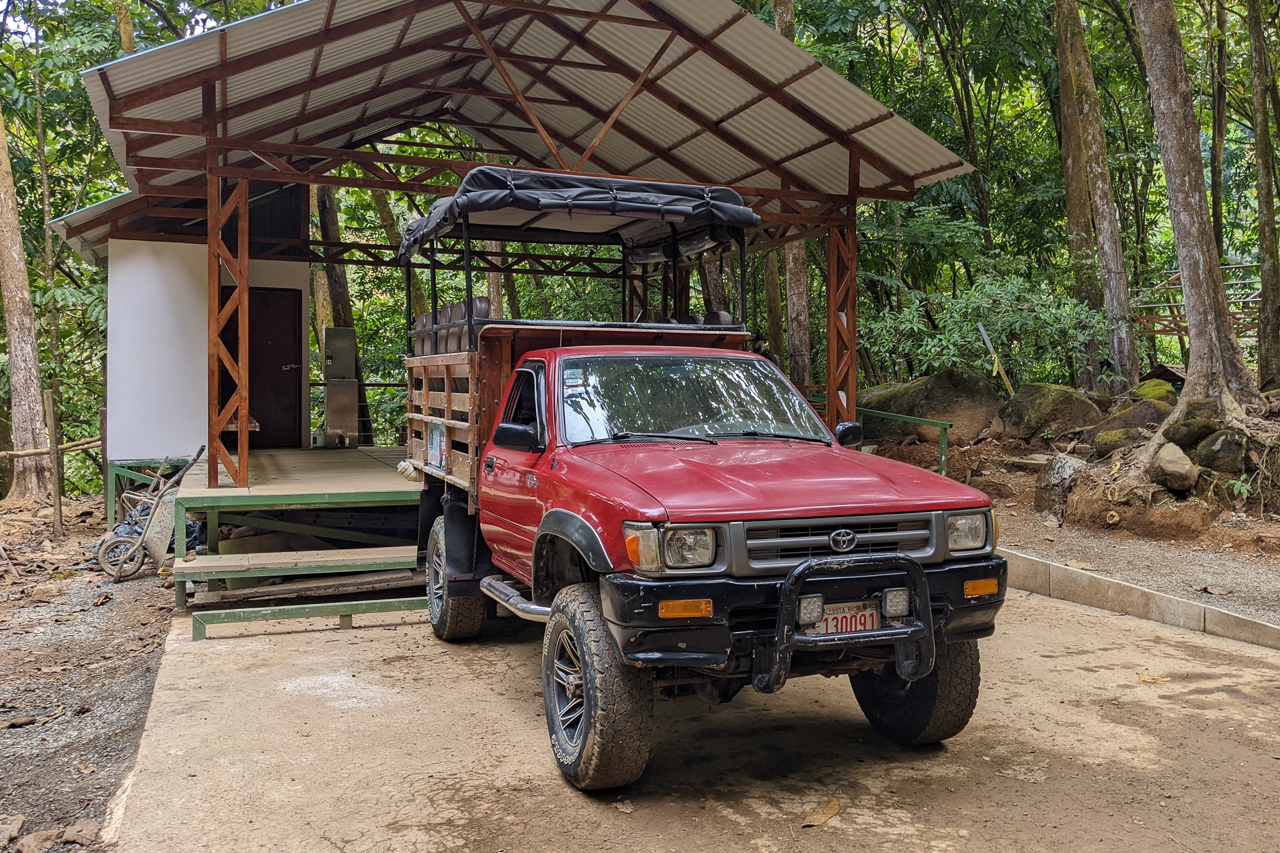 Here's also another important tip: Everybody will tell you to first head to the upper waterfall and then take the stairs down to the lower falls. For photographers this is bad advice in my opinion. The lower falls are the more photogenic and we headed straight down towards them. The other participants of the 4×4 tour first went to the upper falls and so we were alone at the lower waterfall for some precious minutes.

Is It Worth It to Visit Nauyaca

First of all the waterfall is beautiful and I don't regret the visit. Also it was a good decision to go early, because as we left at around 10am it was hard to enjoy the falls any longer with all the people and the noise.

About the 4×4 tour I have mixed feelings. Had I been heading to the falls alone, I'm sure I could have done the hike in somewhere between 35 to 45 minutes. By then I would only have had to deal with a few people in my photo. With some blending in Photoshop I could have easily removed those. Also, I assume that during the week at 7am even less people are at the waterfall. So if you consider yourself a strong hiker, do the hike and safe some money.

As I wrote above we were staying in Dominical for three days because of our visit to Nauyaca. If you like surfing and party, you'll love it. There's plenty of restaurants, there's good surf and there are many young people.

If you are more interested in enjoying nature and have some relaxed time exploring it, Dominical is not the right place. It's just too crowded, loud and busy for my taste. Dominicalito on the other hand was much more relaxed and I enjoyed Playa Dominicalito a lot more than Playa Dominical. 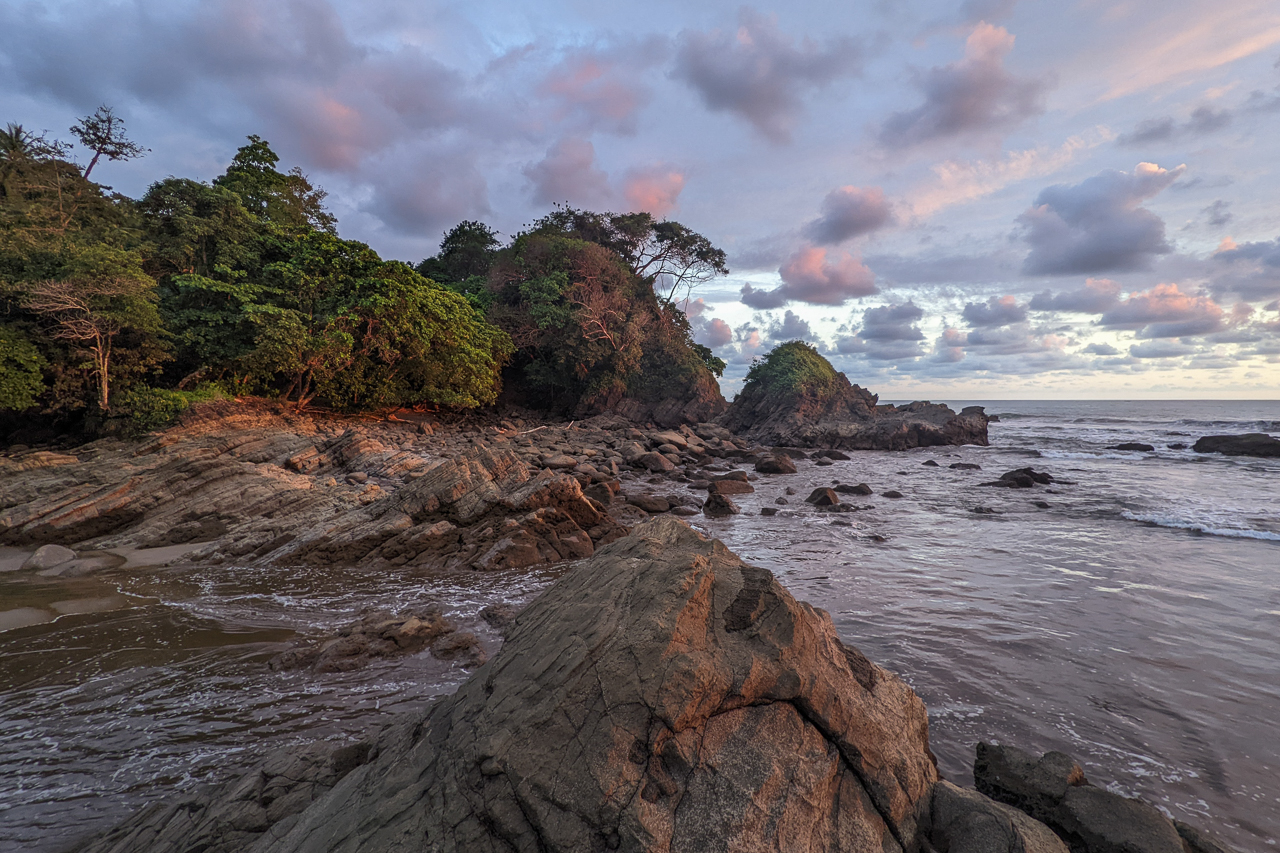 If you are looking for some photo spots along Playa Dominical though, head south along the beach during low tide and you'll eventually get to some interesting rocks. I wasn't expecting to find anything to photograph when we walked there one evening, which is why I only have a cell phone photo to show you here. But I think it shows the potential.