After our visit to Bajos Del Toro, we explored the area around La Fortuna which lies further north at the foot of the Arenal volcano. In this photography guide I’ll share with you, if it’s worth visiting and I show you some photo spots.

La Fortuna is one of the busiest travel destinations in Costa Rica. The area around the Arenal volcano is home to countless attractions for those who are willing to spend the money. The sign we encountered when entering La Fortuna that says "Go Big or Go Home" is clear testament to the type of travelers that La Fortuna likes to attract. Paying 50 USD upwards for a short guided tour is nothing out of the ordinary here. So why did we visit this place after all? Guess what, there's yet another waterfall, which I wanted to photograph.

And in addition to photographing the La Fortuna waterfall, I was also hoping to find some views towards Arenal, which I could use for sunrise and sunset photography. It cannot be argued that through its proximity to said volcano La Fortuna offers some great views of it, if the clouds decide to lift high enough and reveal it. 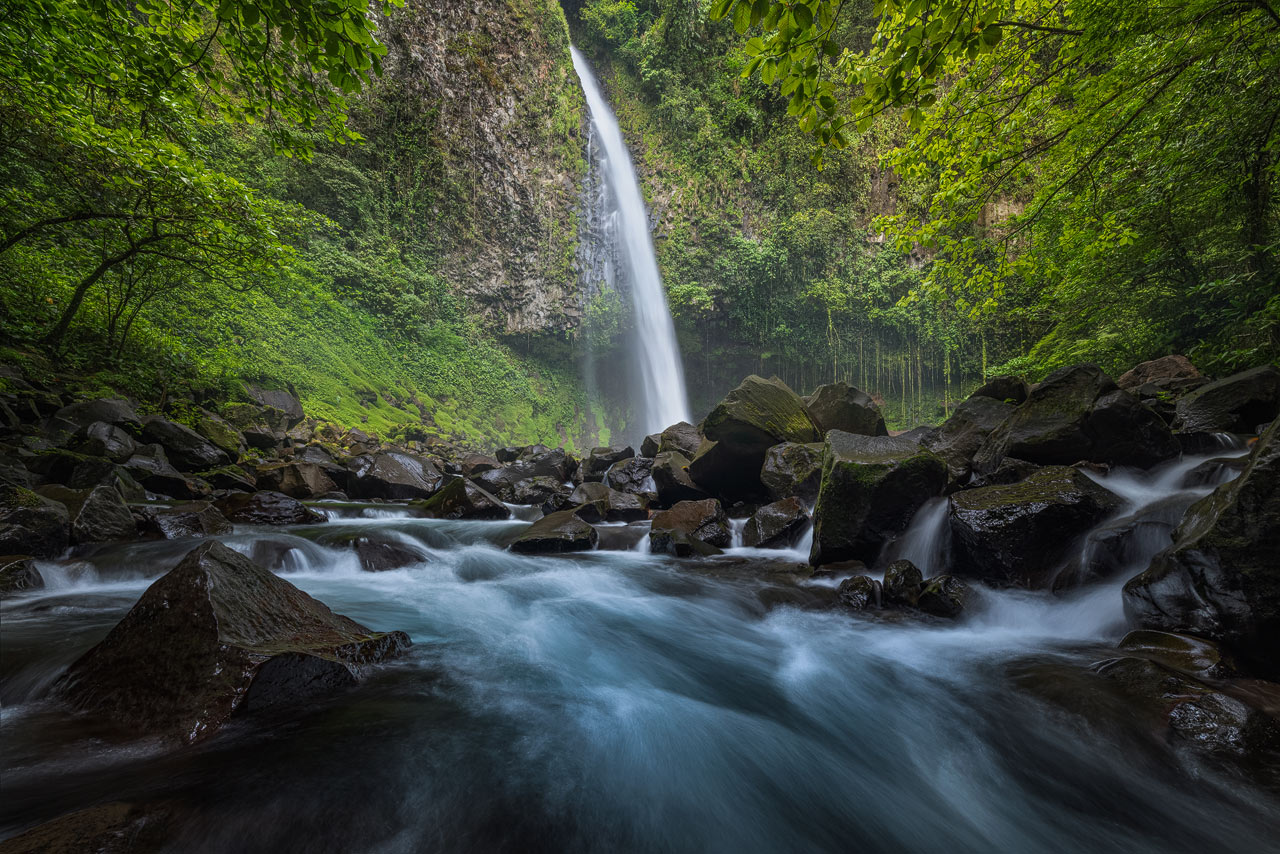 But the possibility to see the Arenal volcano from the porch of an Airbnb or hotel doesn't mean there is a photo to be had. What I found while exploring the area around La Fortuna was that despite the fact that the volcano is nearly always in sight, there are not that many proper photo spots available.

I didn't find one free viewpoint near La Fortuna, from which I could have taken a great landscape photo featuring the volcano. Usually you have to pay an entrance fee, even if it's just a mediocre viewpoint as, for example, the Mirador Nido el Arenal, to which I did a scouting run one morning.

Maybe I should have spent more than two days in the area, but with all the private properties, the pricy lodges and hotels and the gated parks I found two days to be enough.

How to Get To La Fortuna

If you have a rental car, getting to La Fortuna is easy. We made the drive from San Jose via Zarcero, where we stayed a few days to explore Bajos Del Toro. Since driving in Costa Rica is usually slow, with the max allowed speed outside of towns often not exceeding 60km/h, even the seemingly short drive to La Fortuna can take between 3 and 4 hours. You'll also miss some great landscapes along the way, if you drive there directly. I would suggest splitting the drive and enjoying some of the waterfalls in Bajos del Toro – it's just a small detour.

If you want to get to La Fortuna by bus, this is also possible. Because it's such a major tourist destination, transport options are available. A good place to start, if you want to figure out your options, is usually Rome2Rio or Moovit.

But those sites can sometimes be misleading. If they show available routes via specific bus companies, it is always a good idea to check the homepages of those companies for their schedules. There can be significant differences to what Rome2Rio or Moovit show.

I also found a very detailed blog article with some good information about the different transport options. Due to this source and several others I think the public bus might be the way to go, if you don't have a rental car and don't mind a bit of discomfort. It takes around 5 hours and costs 5 USD. But from which of the countless terminals in San Jose does this direct bus leave? Well, it seems Terminal 7-10 is the right one.

A word of caution though: In many articles it sounds easy to find the right bus. But as usual, plan in some time at the terminal. One of our friends tried to get to Zarcero by bus, which is the same route as La Fortuna. And finding the correct bus was a bit challenging. 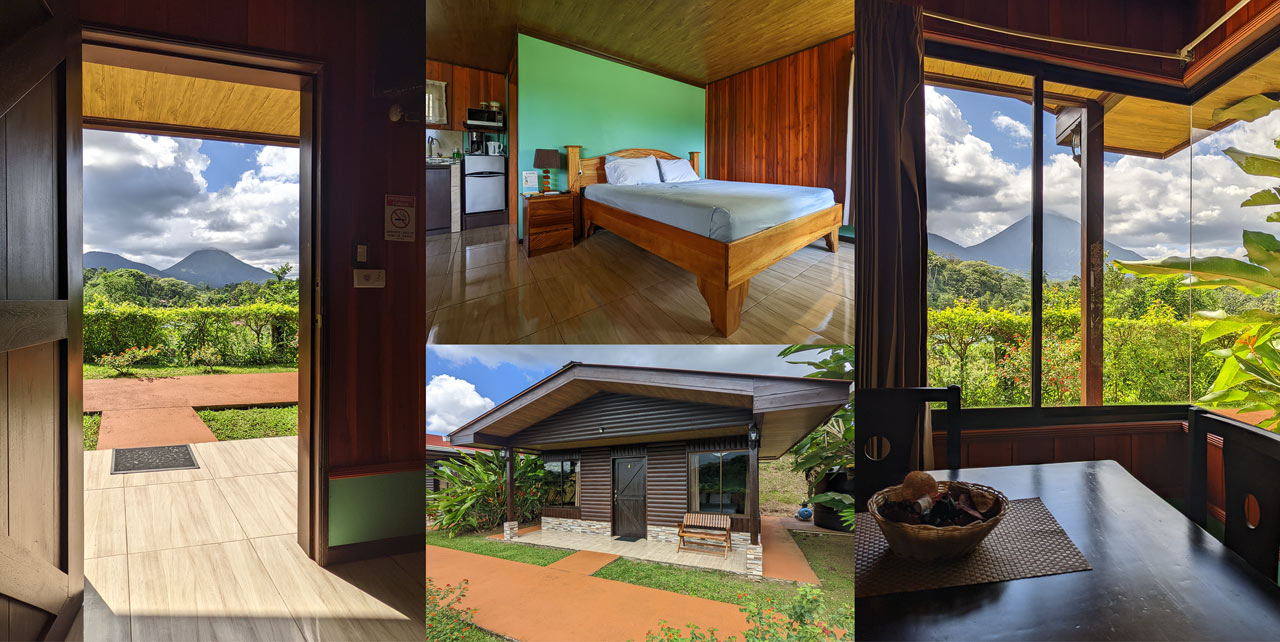 Where to Stay In La Fortuna

Accommodation options are plenty in La Fortuna, including some fancy hotels with their own natural hot springs. But honestly, with nearly 30°C outside, why does everybody make such a big thing out of those hot springs. We're not in Iceland, it's tropical Costa Rica and I usually prefer cold rivers.

If you are looking for an affordable option with a great view as we were, you'll like this offering by Home Vacations. By car it's just a 10 minute drive from the La Fortuna waterfall and in an equal amount of time you're in downtown La Fortuna. The house we rented was clean, had a kitchen and good internet.

If you are travelling by bus, I would advise against this accommodation though. You'll be better of in La Fortuna. Best look for something in the outskirts where it's a bit quiter. Or, if you don't mind the bustle, find something right in the heart of La Fortuna. 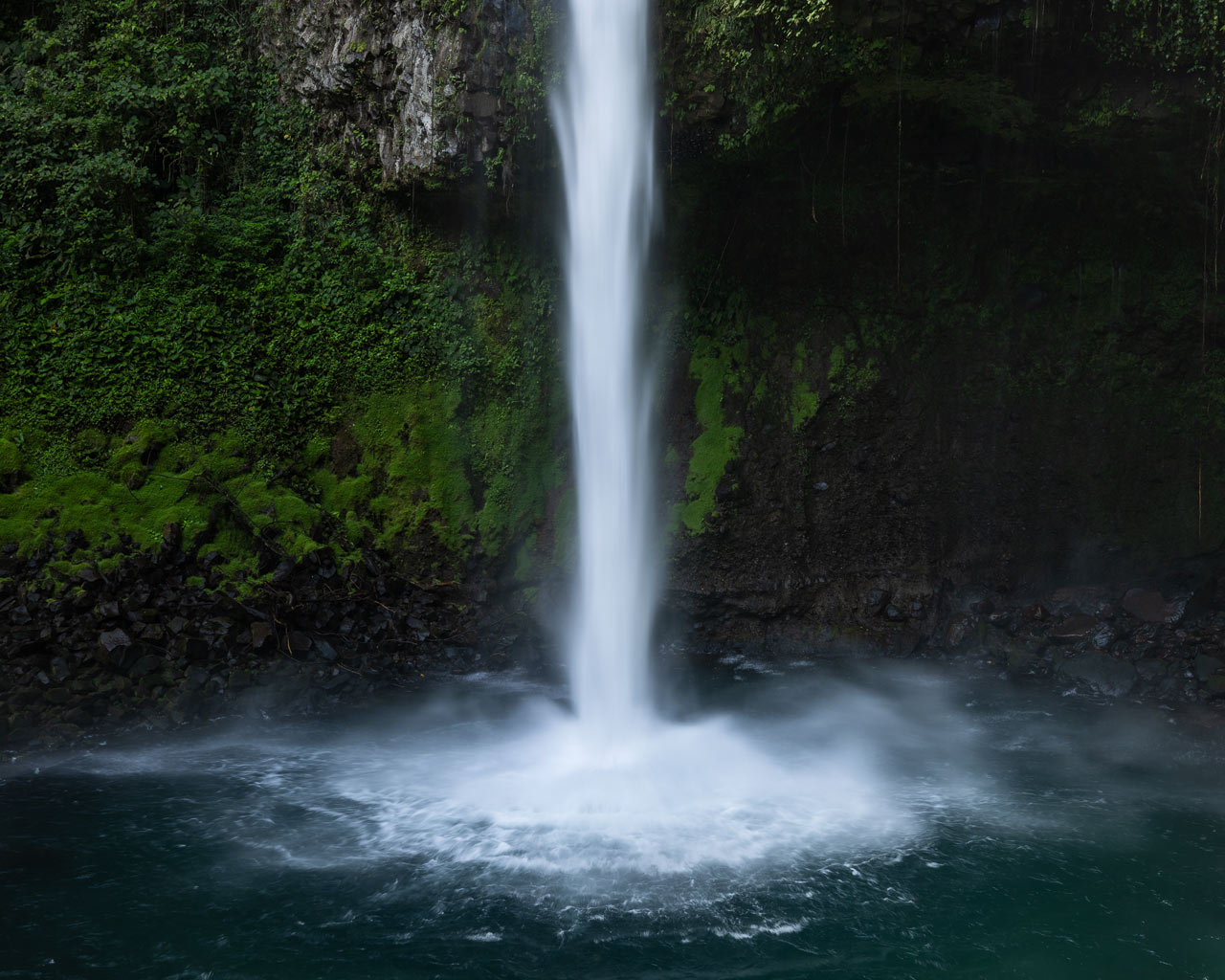 The main reason for me to visit La Fortuna was the famous waterfall. An believe it or not, visiting this beauty is with 18 USD entrance fee even one of the cheaper things you can do in the area.

Our travels had unfortunately brought us to La Fortuna at a weekend. This meant that our only option to visit the waterfall was a Sunday. But it could not be helped and so we made sure to be the first people at the waterfall by arriving at the entrance 10 minutes before it opened at 7am.

There are many stairs that lead to the base of the falls. It took me around 5 minutes to get down, because I skipped the views along the way. There's no reason to stop, because photos of the view at the top, for example, can be taken even when the place is crowded. You won't see any people in the frame since the base of the falls is not visible from the viewpoint.

Down there it's a different story though. Once the crowds arrive the rocks around the waterfall will be swarming with people. But to my surprise those crowds didn't arrive before 8am. This meant that I had a full hour to find and photograph the best perspective.

In my opinion crossing the river is a must here. The rocks are slippery, the current is strong, but it's totally worth to get to the other side, because then you can include the river in the foreground of the photo. This can provide some nice leading lines as you can see in the title photo of this article. 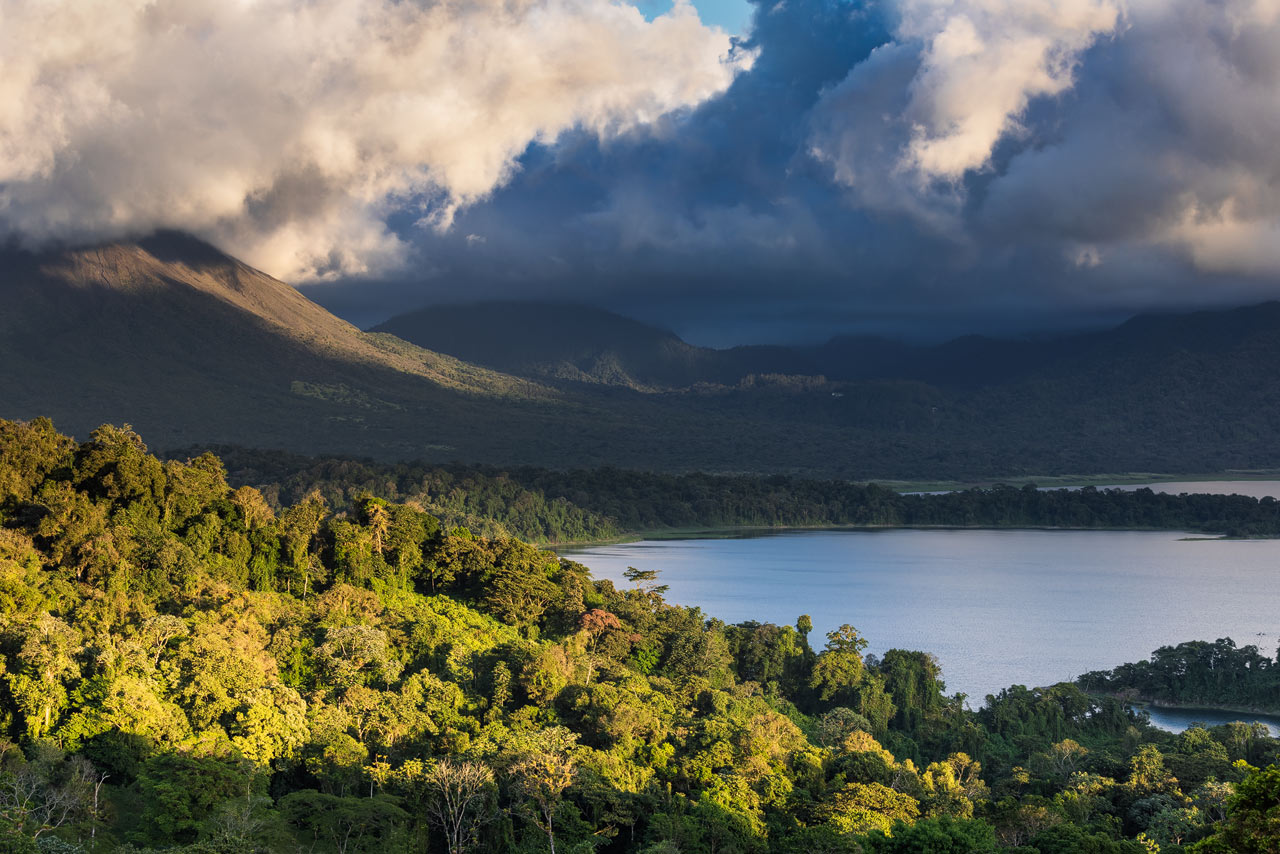 In the afternoon of the same day I photographed the La Fortuna waterfall, we drove to the other side of the Arenal volcano to a viewpoint called Mirador la Armonia. As usual there was an entrance fee to enter, but a reasonable one of 3000 Colones. You could even camp there, if you have the equipment with you.

Compositions from there are limited to the long lens, but with the clouds drifting across Arenal lake while the sun was setting in the west it still looked quite pretty. In the video below I included a little timelapse at the end in addition to some behind the scenes footage from the La Fortuna waterfall.