The last article was all about how to get from La Fortuna to Monteverde and if you haven't read it and plan to do this tour, I recommend to check it out. Here in this Monteverde Photography Guide I now share some interesting photo locations with you and I give tips on getting the most out of them.

And to get the most out of Monteverde photographically, make sure to plan in several days in this area. We first stayed for four days down in Santa Elena and then another two up at the Vistaverde Lodge*. This allowed me to explore the area without too much of a rush, focusing on one location at a time for my landscape photography. This is important because of the road conditions around Monteverde. Most roads are bumpy gravel and it takes a lot of time to get to the different locations. Ten kilometers around Santa Elena can take you between 30 to 45 minutes, if you want to avoid a flat tire along the way.

One thing you should also be aware of is that, similar to many other places in Costa Rica, nearly nothing is free in this area. Entrance fees for the different cloud forest reserves range from 15 USD to somewhere around 40 USD. Visiting them all might be too expensive, so it's important to pick the right places to photograph. And while I cannot say for sure that the places I show you now are indeed the most photogenic, I can certainly attest that you can take beautiful photos there. 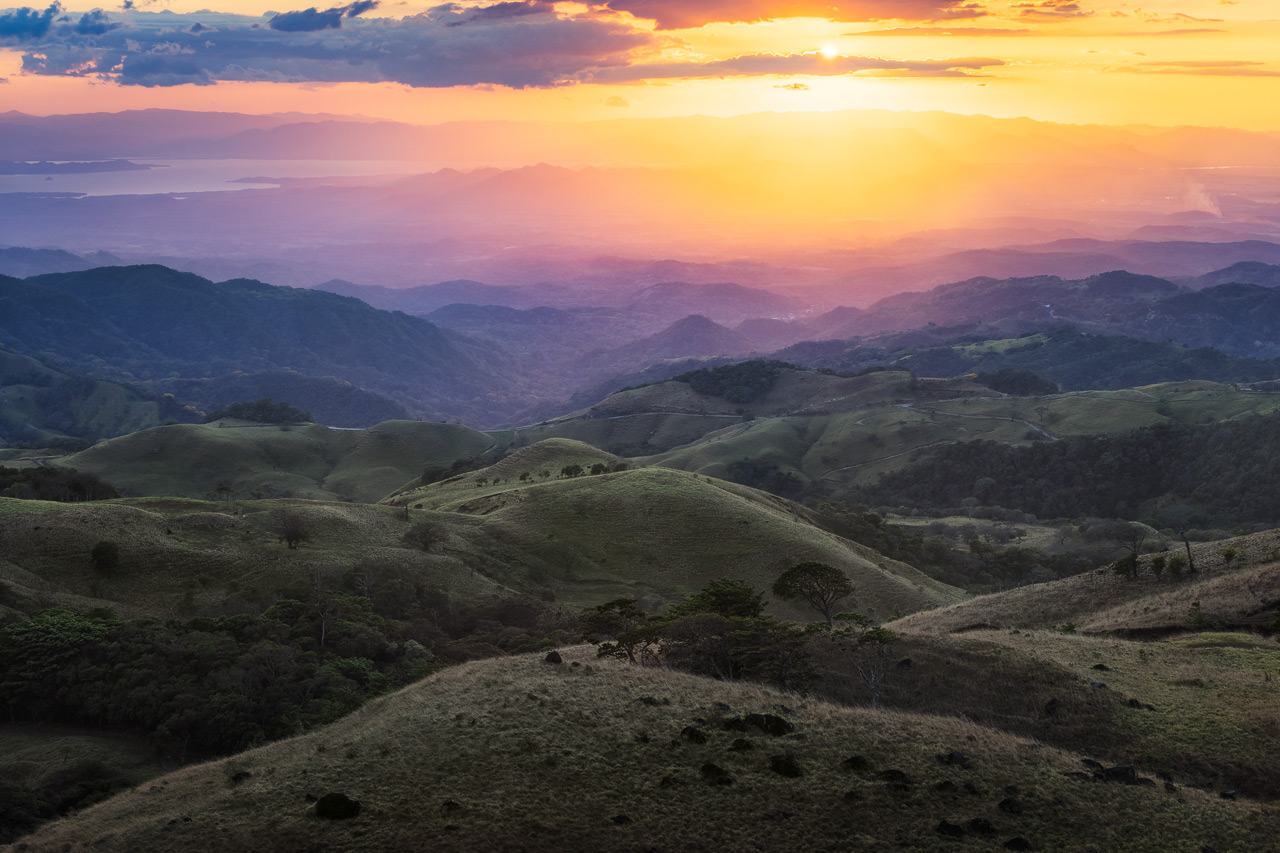 And I even start with a free view, which is great for sunset photography. If you head down the gravel road towards Cerro Pinocho you'll already encounter beautiful views towards the Gulf of Nicoya before you arrive at the end of the road. At Cerro Pinocho you'll find a picnic area and you will have to pay a little entrance fee of 2500 Colones – 4 USD. For a bit more you can even get a prepared picnic there.

But based on my research I decided not to head all the way to Cerro Pinocho, because the views around one kilometer earlier were much more interesting to me. With a long lens I was able to pick out beautiful details in the landscape and photograph the rolling hills with the Gulf of Nicoya in the background. For this I could just stand next to the road without having to pay any entrance fee.

As for the drive to this view I would recommend an SUV or jeep, because there are bumps in the road and in one place it gets a bit steep with some larger rocks. But if you go slow it's not too bad. 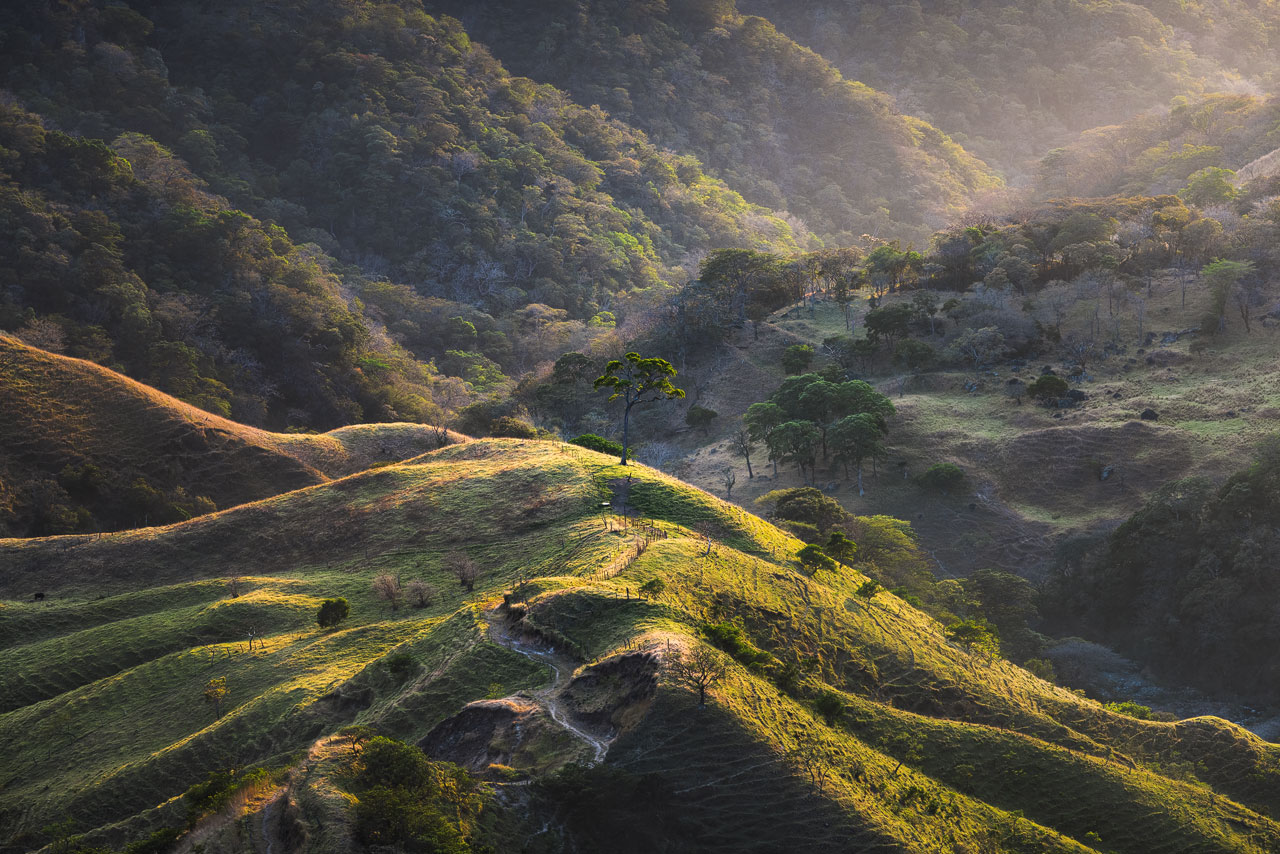 There's another free view even closer to the town of Santa Elena. If you drive down Road 606, a kilometer out of town you'll find a little gravel parking space right next to the road. In the evening some cars will usually be parked there because it's a beautiful view.

Again, bring the long lens and wait for the sun to get low in the sky. Then the soft evening light gives the hills in the valley below a beautiful dimensionality. If you try to photograph this view too early, there will be too much haze and everything will look flat. 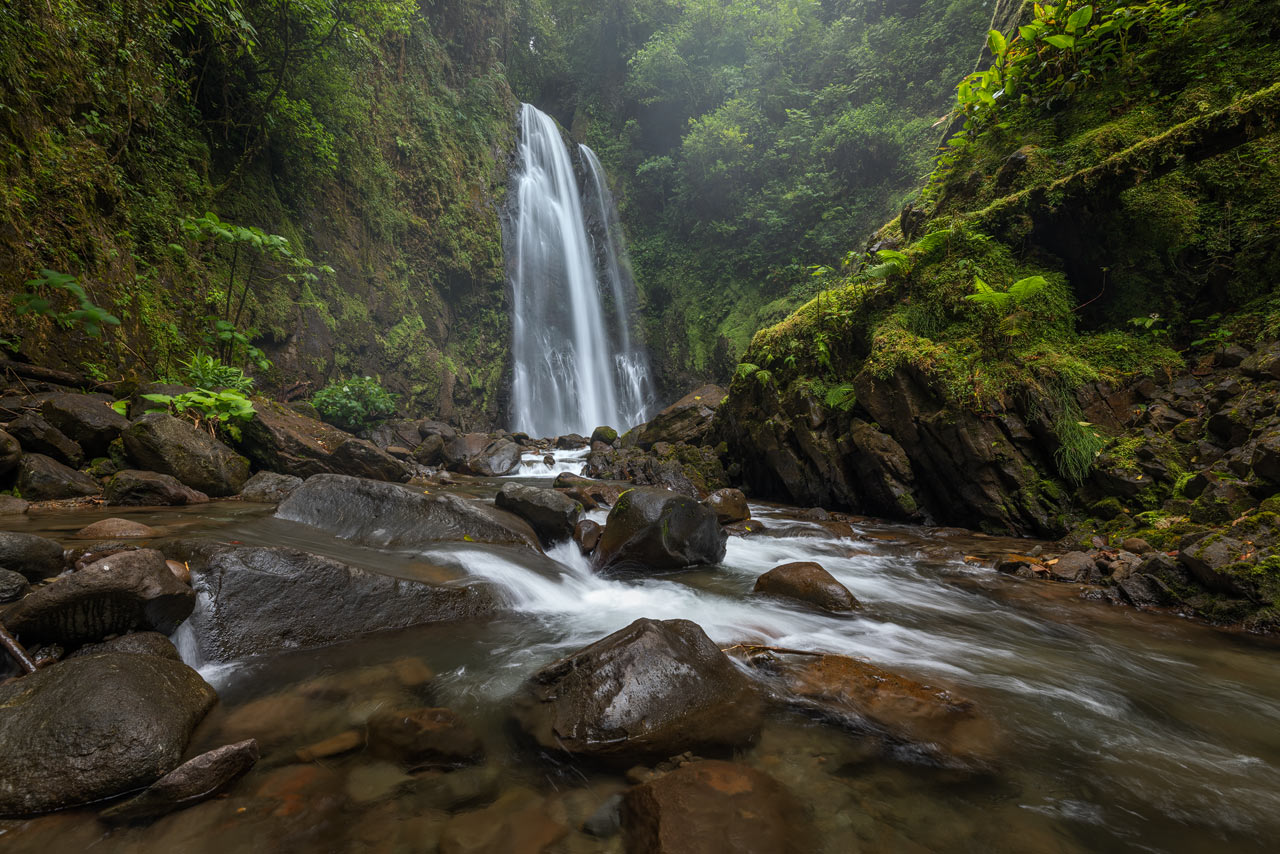 It will take you a bit more than 30 minutes to get from Santa Elena to the El Tigre Waterfall trail head. Here you will have to pay an entrance fee and you can even choose between different packages. Interesting for photographers is the so called Big Hike, which costs 29 USD. This is basically an entrance fee that allows you to hike the waterfall loop.

The loop is a total of 8 kilometers, of which the last 3 kilometers are ascending out of the gorge that contains the 4 waterfalls and 10 bridges that make this area so interesting. When we went there it was pouring and the 1,5 km descent down to the first and most beautiful waterfall was a bit slippery. The paths are prepared very well though.

Because I took so much time to photograph the first waterfall, we didn't do the complete loop and I'm also not sure, if this would have been so interesting. What we ended up doing was walking back the way we had come after we had gotten to the third waterfall. This reduced our total hiking distance that afternoon to around 5 kilometers. In the end, of the three waterfalls we saw, the first was definitely the most photogenic. Unfortunately we didn't make it to the final waterfall, because it was getting late. So I cannot tell you, if it's worth the additional effort. 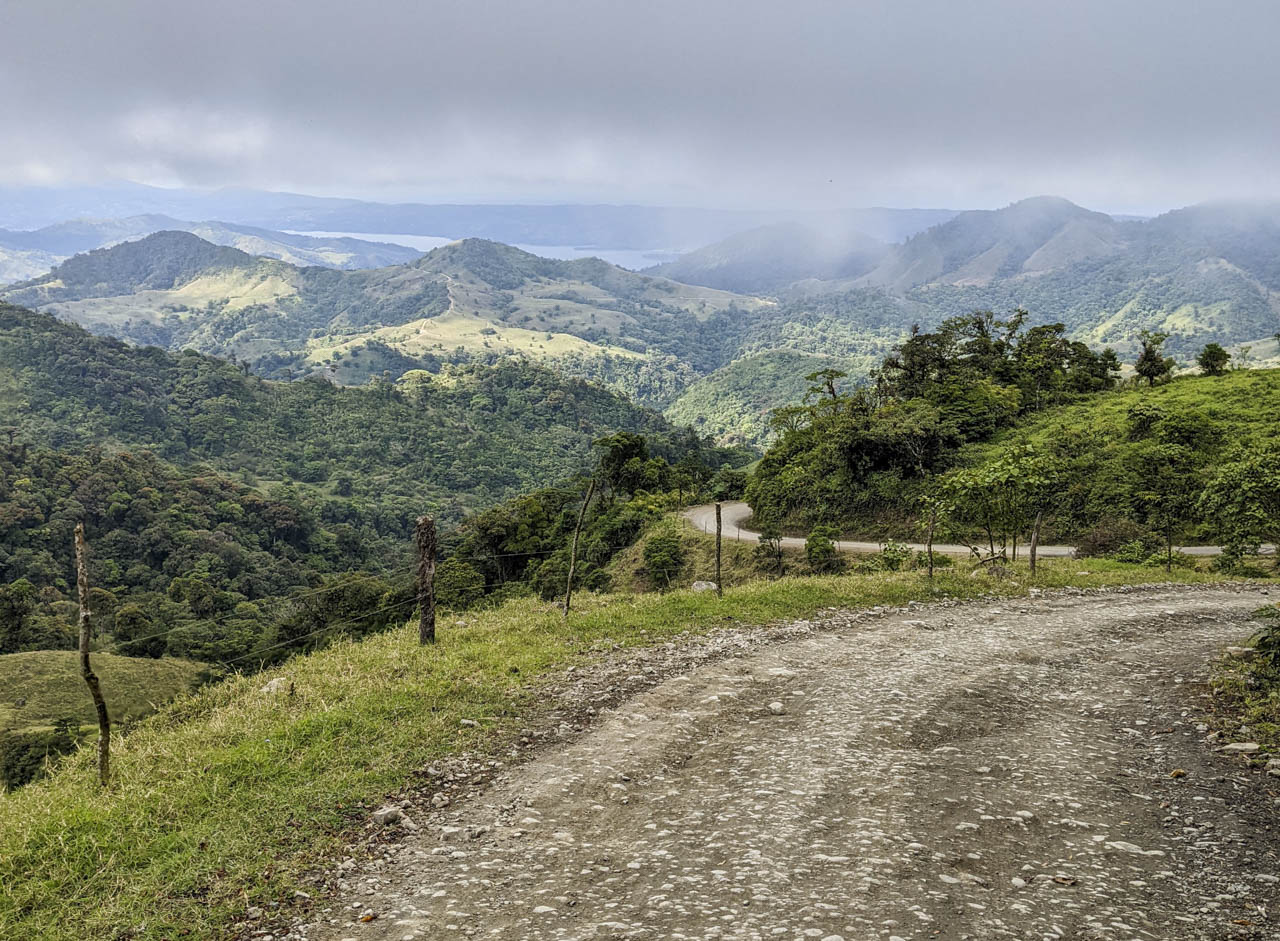 On the way back to Santa Elena we made a short stop at Mirador Los Olivos. I would assume that this is a great spot for either sunrise or sunset photography. On a clear day the views from there must be fantastic. I can only assume though, because on our visit the clouds where obscuring those views.

One final note: I made a reservation to do the hike the day before via Whatsapp. I'm not 100% certain, if this is a requirement. But since they allow you to book the different tours on their site, I wanted to play it safe. 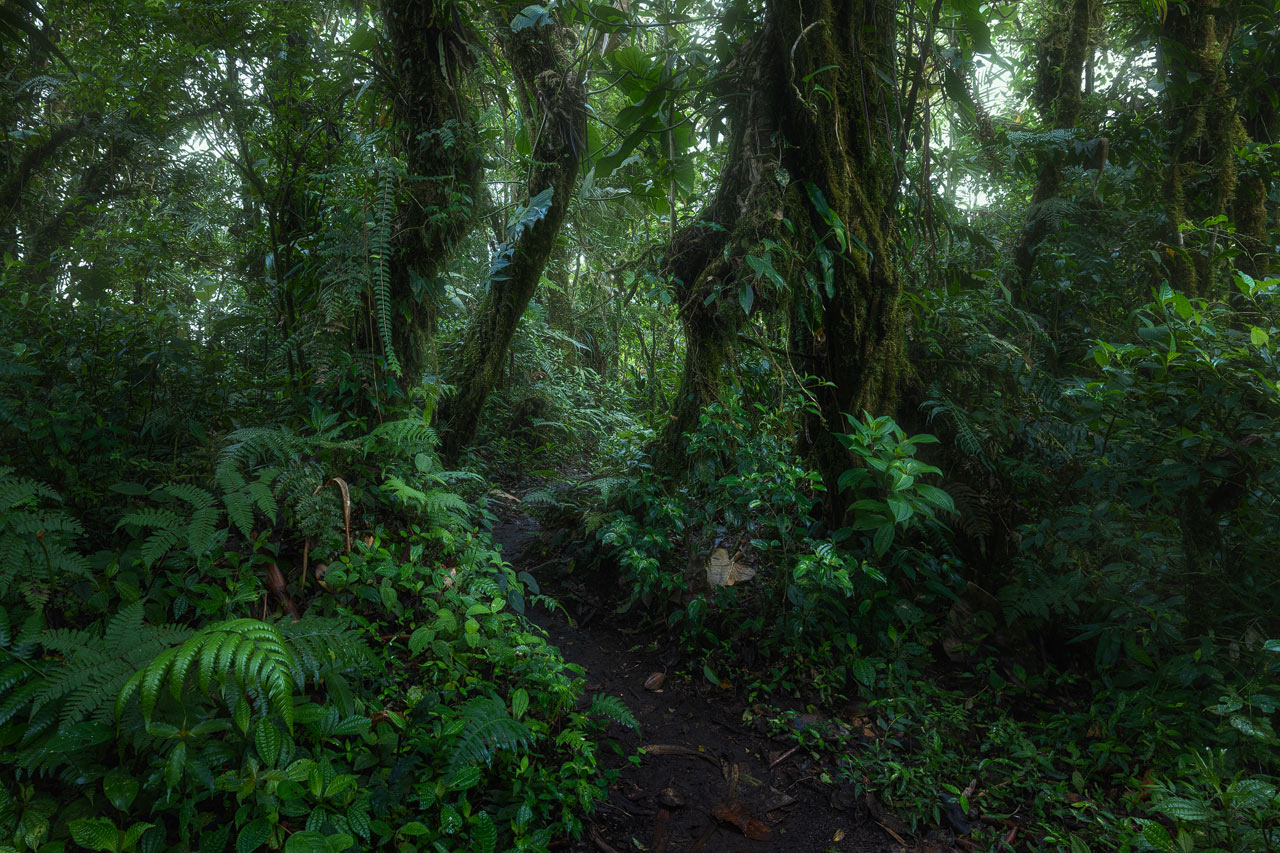 The main reason to visit Monteverde is the beautiful cloud forest that covers the hills above and around the town of Santa Elena. The two major cloud forest reserves are the Santa Elena reserve and the Monteverde reserve. There are more places you can visit, including some with spectacular hanging bridges like the Selvatura park. The problem with those is not only the price but also the time slots that are available for a visit.

Out of interest we went to the Selvatura park in the morning, for which we had to reserve such a slot. We then entered with a group of other people who had also booked it. For photography this was bad. I was always in a rush, because the next group was already on our heels. But with the bridges spanning up to nearly 200 meters it is no doubt a spectacular place to visit with some unique views of the cloud forest.

For photography though we went to the Reserva Bosque Nuboso Santa Elena. This park opens at 7am and costs an entrance fee of 16 USD per person. With more than 10 kilometers of trails in total this is good value for money. We even decided to visit twice and got a discount for the second day. The reason we focused on the the Santa Elena reserve and skipped the Monteverde reserve was its elevation. The Santa Elena reserve lies a bit higher, which increases the chance to encounter fog and clouds up there.

And I was really hoping to get such conditions during one of our visits. But the problem was the strong wind, which is typical between December and April as one of the locals told me. This is not ideal for woodland photography, because there's a lot of movement in the already chaotic forest. Moreover it's preventing consistent weather conditions with thick fog in the forest. Usually the clouds blow through the forest quickly.

I still found two interesting compositions. The image below was taken down in a little canyon where no wind was shaking the foliage. Even without fog it was a great scene with all the greenery that makes Monteverde so special. The photo above was a bit more tricky to capture. This little path was in a pretty exposed area of the reserve and I had to use high ISOs and an open aperture to achieve short enough exposure times to freeze the motion in the leaves. 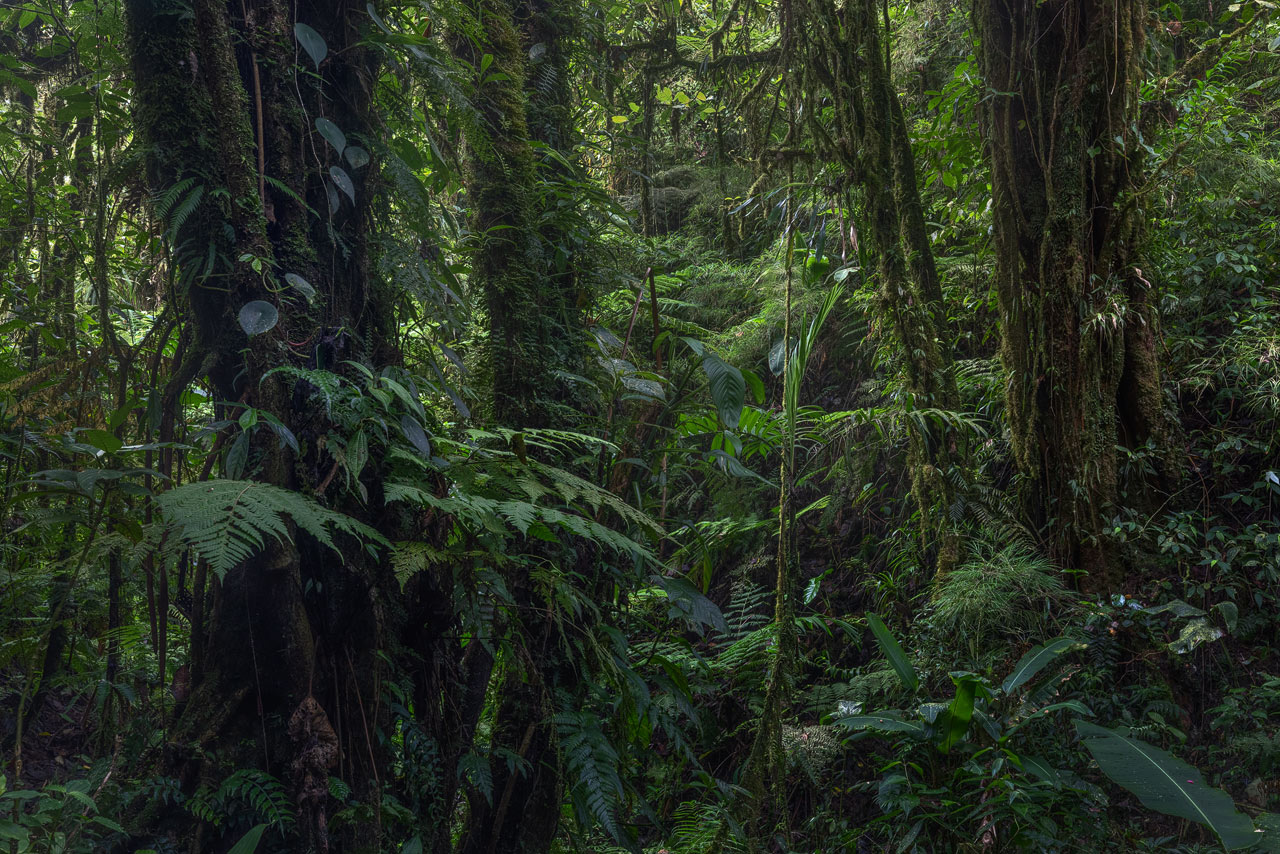 Whichever of the reserves you decide to visit, make sure to bring enough time. We walked all the trails of the Santa Elena reserve to find the two scenes I captured. There's surely more to photograph, if there is fog. But without it, it's very hard to find the order in the chaos that is necessary to create a successful woodland photo.

High on my bucket list was also capturing a photo of the Arenal Volcano and a great place to do this is the Vistaverde Lodge*. The Santa Elena reserve also has a viewpoint, from which you can see the Arenal Volcano on a clear day. They even offer a sunrise tour to this viewpoint. I decided against this tour though, because I would have had to book it in advance without knowing how the conditions would be.

At Vistaverde Lodge we booked two nights to allow for more flexibility. For around 50 USD a night, including breakfast, we got a room, from which I could walk to the viewpoint in 2 minutes. The room was a bit basic and damp, but we came there for the views and as we arrived at the lodge we directly had a relatively clear view towards Arenal. If only the light had been better. 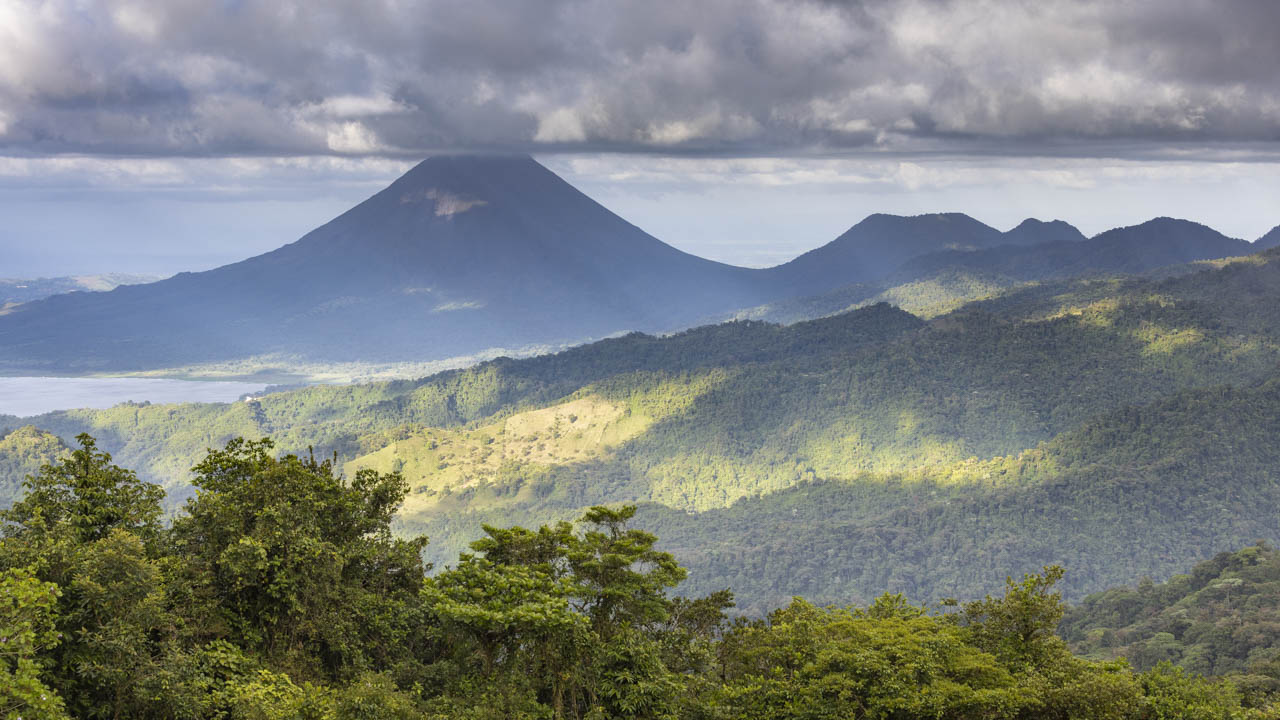 The following two mornings the whole area was clouded in. We didn't see the volcano again and I didn't get the photo I had come to take. So I decided to do a quick hike to the waterfall, which is located a few 100 meters below Vistaverde, on a rainy afternoon. The hike takes no more than 30 minutes and it's totally worth it on a foggy and rainy day. And that's the nice thing about this lodge: Not only do you get the chance to experience views towards Arenal, you can also do a hike through a beautiful cloud forest, if those views are obscured. 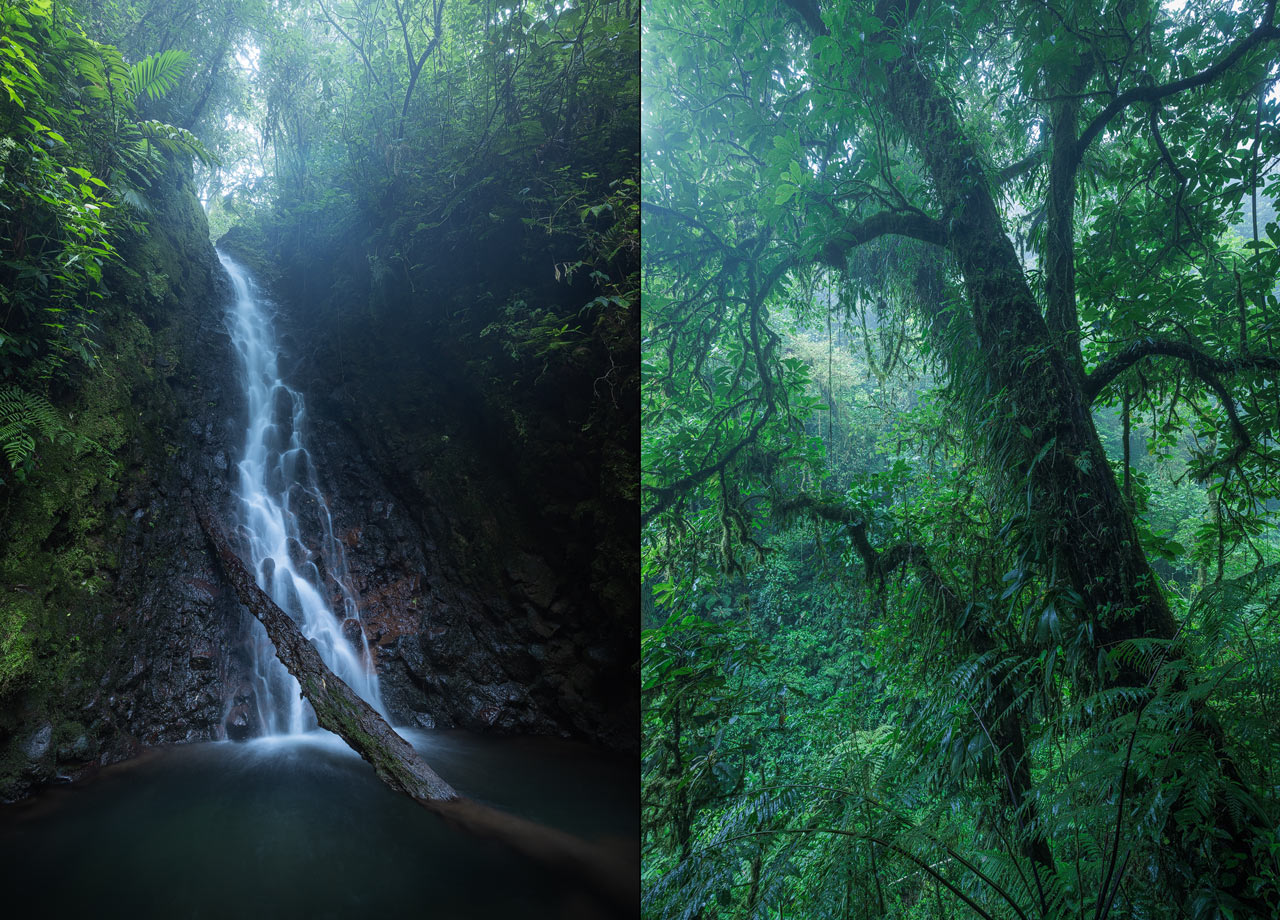 At the end of this article I also want to share the little behind the scenes video I recorded in the Santa Elena reserve. In it I talk a bit more about the challenges of photographing this forest.