After visiting the mountains of Costa Rica and exploring the cloud forest of Monteverde, it was time to return to the coast. We had started our travels through Costa Rica at the Pacific coast of the country and wanted to finish our journey in the east at the Caribbean coast. Based on my research the area around Puerto Viejo looked the most photogenic with seemingly crystal clear water, coral reefs and paradise beaches. In this photography guide I share what I found during the 11 days we spent in the area.

We split our time there into three parts, because we also wanted to visit Cahuita, Tortuguero and Bocas del Toro in the 4 weeks we had left in Costa Rica. First we stayed for five days in Cocles before heading to Cahuita and Tortuguero. Then we returned for three days and stayed in Playa Chiquita, after which we went to Panama to visit Bocas del Toro for a week. On our way back from Panama we spent another three days in the Puerto Viejo area, this time making Manzanillo our home base. 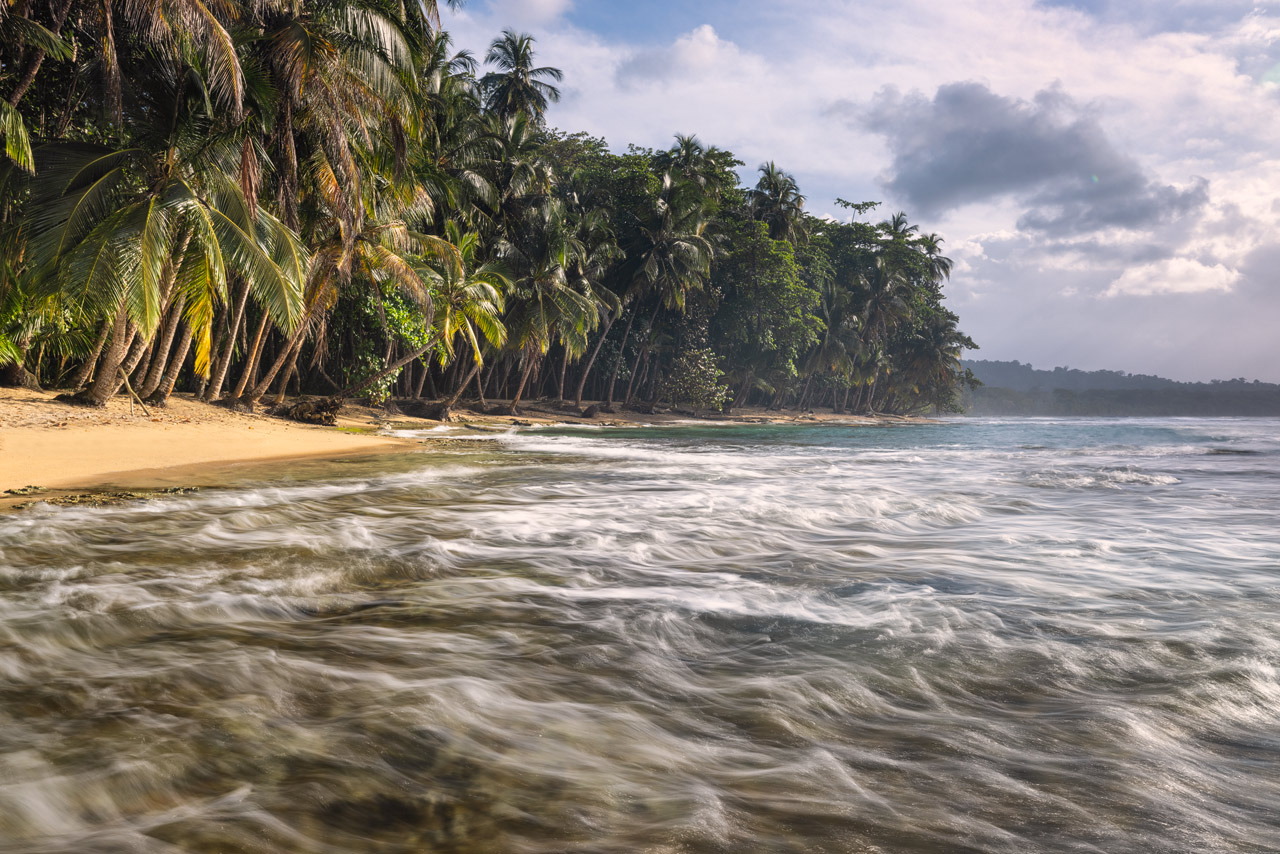 Getting to Puerto Viejo

First, I want to share the easiest way to get to Puerto Viejo and that's using the MEPE bus. In contrast to my recent articles where a rental car was always the recommended way of travelling, the Caribbean coast is perfect for classic backpacking. The MEPE busses run frequently back and forth between San Jose and Puerto Viejo. Every two hours a bus leaves from the MEPE station in San Jose and the price per person is less than 10 USD.

The drive takes between four and five hours and you'll be dropped in the center of Puerto Viejo, close to all the bustle of town. To be honest, I would strongly suggest to get a hotel outside of Puerto Viejo. I didn't like the town that much – too loud, to many people, too dirty. The more picturesque beaches are found near Playa Chiquita, around Punta Uva and in Manzanillo. This is where you want to stay, if you are a photographer.

To get to Manzanillo you can take one of the busses from San Jose that continue to Manzanillo after stopping in Puerto Viejo. Those are less frequent though. The alternative is to simply take one of the regular MEPE busses that run between Limon and Manzanillo. Those also stop along the road in Cocles, Playa Chiquita and Punta Uva.

If you are planning to take a taxi to get to your hotel, think again. Taxis are a rarity around Puerto Viejo. If you don't have a lot of luggage, you can take a tuk-tuk or call your hotel to organize a transport for you.

During our first visit we stayed in Cocles in a wonderful guesthouse* a little more than one kilometer away from the main street and the Super Negro Cocles supermarket, which I totally recommend. From there we either walked to the beach or took the complimentary bicycles. Bicycles are the most common and cheapest option to get around. The terrain is relatively flat and although the main street can get busy it's usually no problem to ride a bike there. 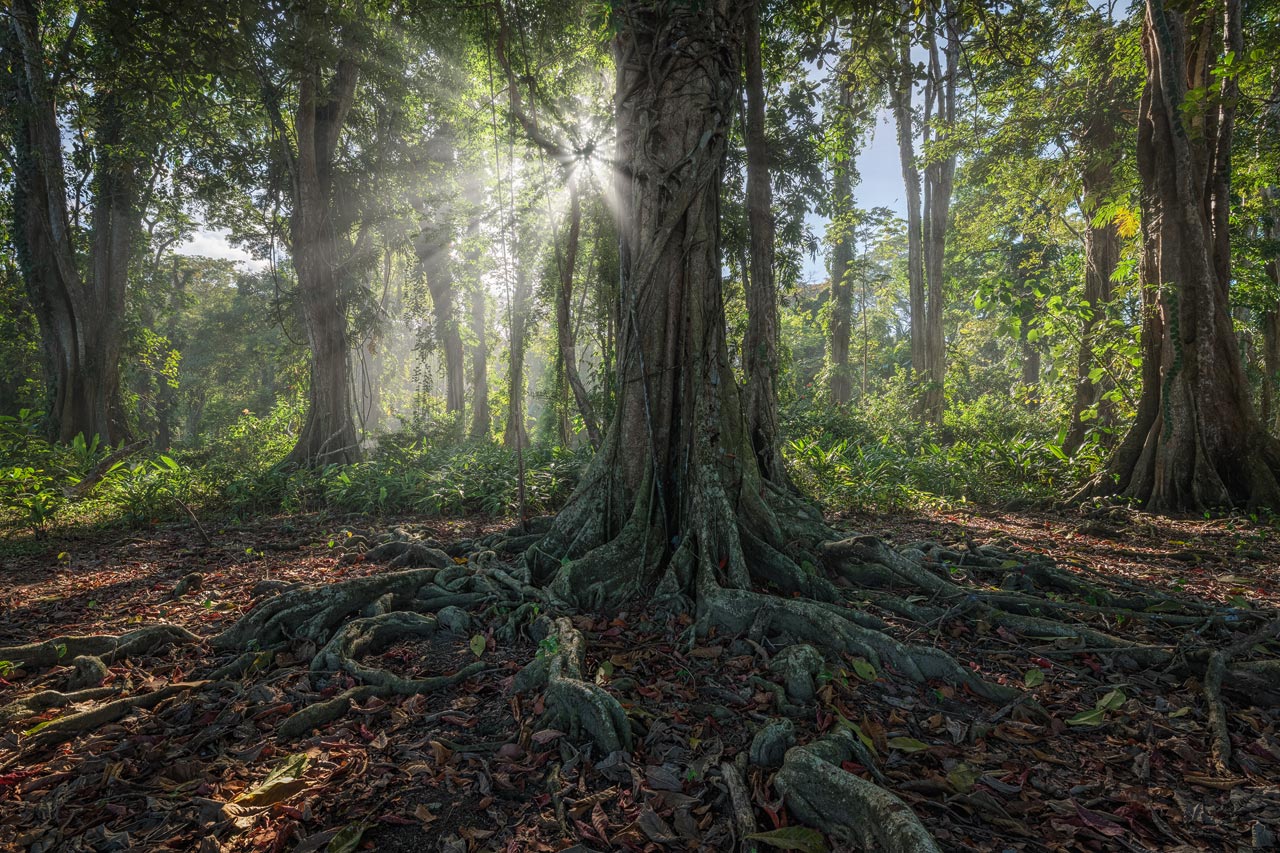 As for photography there is Cocles beach, which has a nice sea stack at it's northern end. To be honest though, I didn't find this beach very photogenic. Compared to what I was used to from the Pacific coast it just cannot compete. There is also much less tide at the Caribbean coast, which means footprints are not washed away.

Much more photogenic than the beach was the adjacent forest. At the northern end of the beach you'll find a beautiful coastal forest, which looks magical especially in the afternoon when sunrays shine through the leaves. The spray from the sea creates the moisture in the air that causes this phenomenon.

For our second visit we stayed in Playa Chiquita, which is just a few kilometers further down the road from Cocles. We had already explored Playa Escondida and Playa Chiquita while staying in Cocles and I wanted to take some photos there early in the morning. During our time in Cocles the light hadn't been great at sunrise with clear skies and low clouds at the horizon and I was hoping to get better conditions during our second visit.

What ended up happening though was that after some storms seagrass was piling up on the beaches. As I learned later, this is something that happens around Puerto Viejo at least once a year. With the seagrass there was no chance I could take a good seascape photo. The beaches had lost all their appeal for me, which hadn't been that high to start with. Even with the best light it would have been impossible to take a proper Caribbean beach photo now.

At least there were some sloths nearby and watching those furry balls climb around in the trees was very enjoyable. After visiting many places in Costa Rica, I would say that, if you want to see a sloth, the area around Puerto Viejo is the place to go. There are just so many of them in the trees. 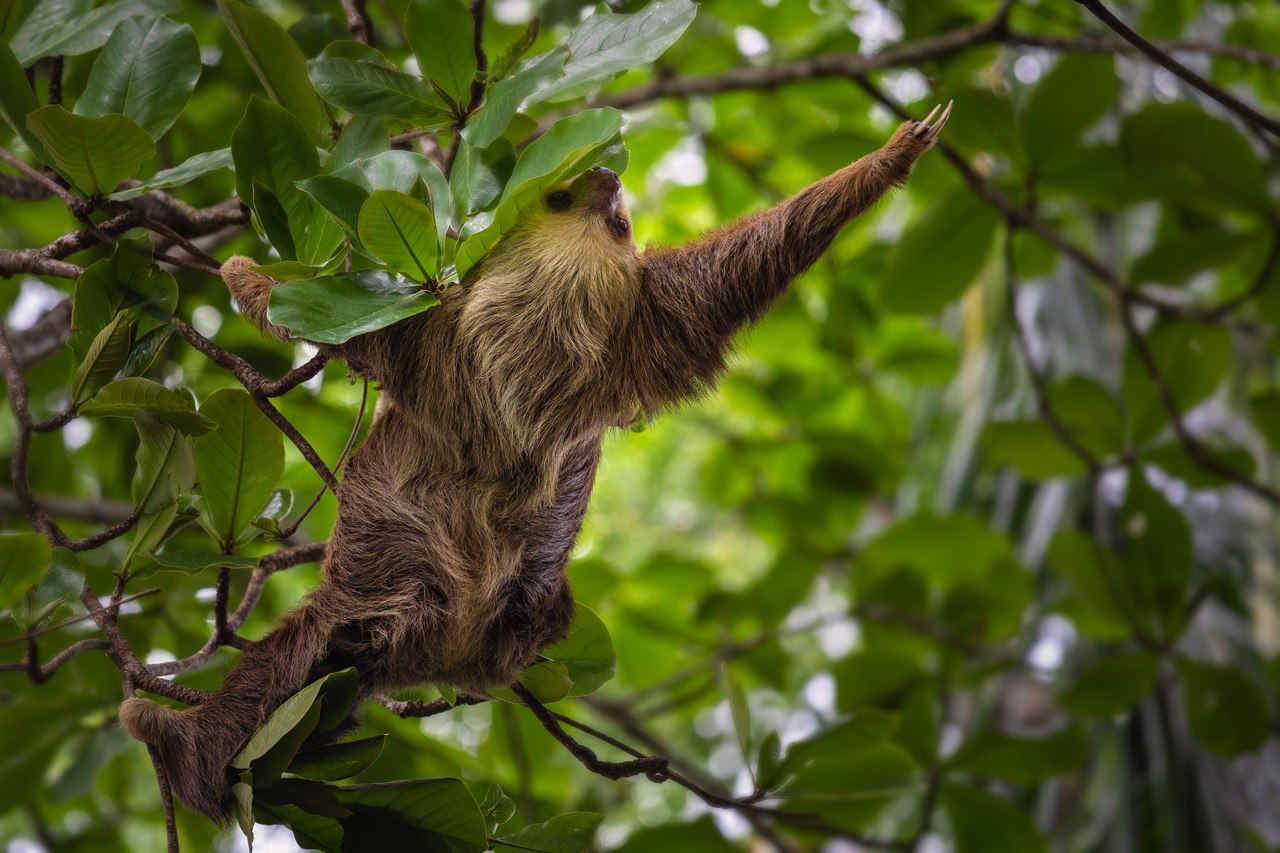 If you do some Google research on the area around Punta Uva you will certainly encounter some drone photos taken from above. On those every beach around Puerto Viejo looks like paradise. The colors, the reefs, the palm tress – there seems to be so much photographic potential. The reality though is that the beaches don't provide that much interest for real landscape photography.

If you own a drone, make sure to bring it along, because in my opinion it is the best way to photograph the beaches between Puerto Viejo and Punta Uva. Making those beaches look great in a classical landscape photo on the other hand is not that easy and I failed completely during my first two visits, taking not one good seascape photo. Maybe with proper light and no seagrass things would have been different, but I would still advise any visiting landscape photographer to not expect too much.

So my search for the perfect Caribbean beach in Costa Rica continued and I finally found it in the Gandoca reserve in Manzanillo during our third visit. Manzanillo is a beautiful little town with just a few hotels and guesthouses, some restaurants and a little supermarket. We were staying a little out of town in a beautiful house*, which was one of the best of our complete stay. From there it was just a two kilometer walk to the entrance of the Gandoca reserve.

And the reserve had all I was looking for: palm trees, sea stacks, rocks, secluded coves and crystal clear water. The biggest relieve for me was also that unlike at Playa Chiquita and Playa Cocles there was literally no seagrass at the beaches inside the Gandoca reserve. Even at Manzanillo beach there was far less seagrass.

The only problem with the Gandoca reserve were its opening hours. For foreigners it's only allowed to enter from 6:30am to 4pm. Hence, photographing a sunrise or sunset inside the reserve is officially not possible. 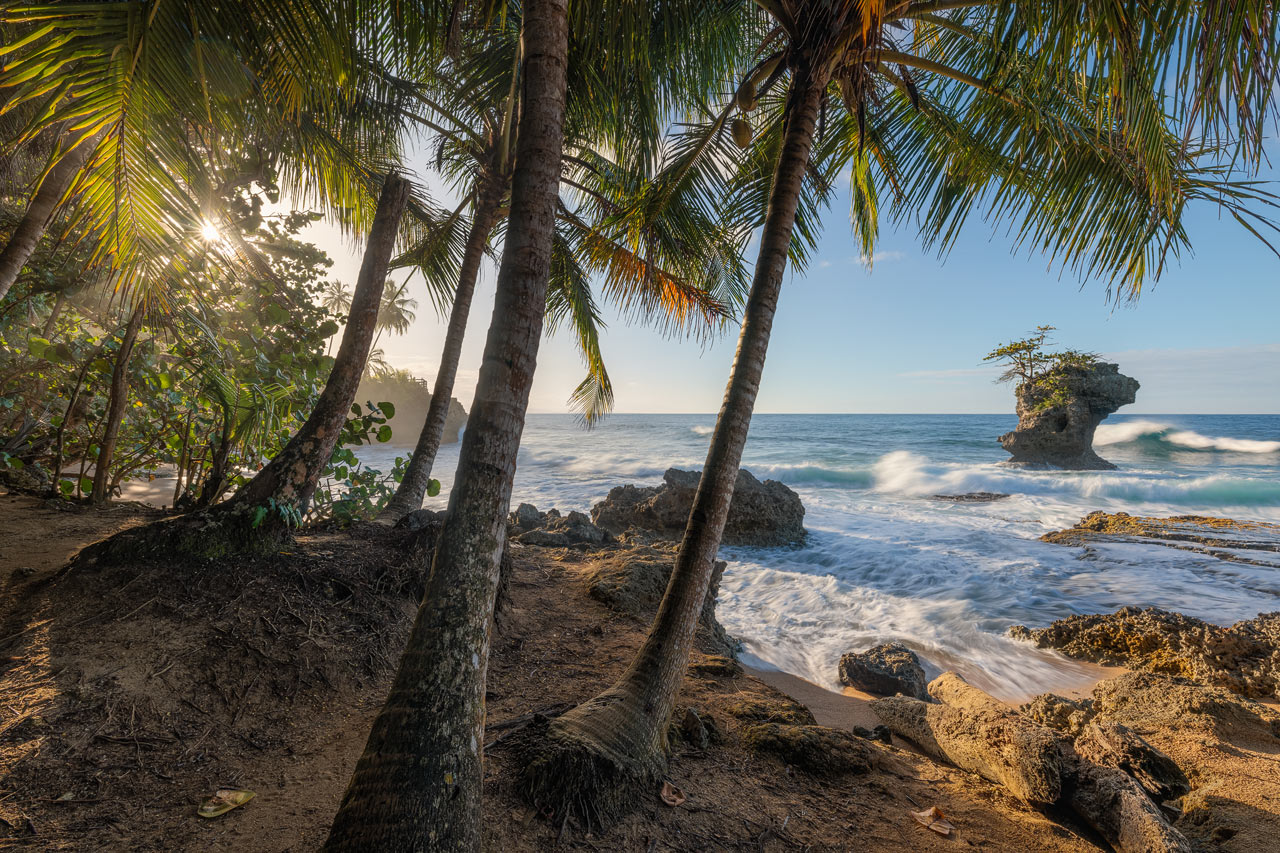 While it's not allowed to photograph sunrise and sunset inside the Gandoca reserve, you will still find a beautiful subjet to photograph during those times. Just a few 100 meters north of town, a stranded ship lends itself perfectly for seascape photography. On our final evening in Manzanillo I was lucky to get some dark clouds, which I think provide the perfect backdrop for this scene. 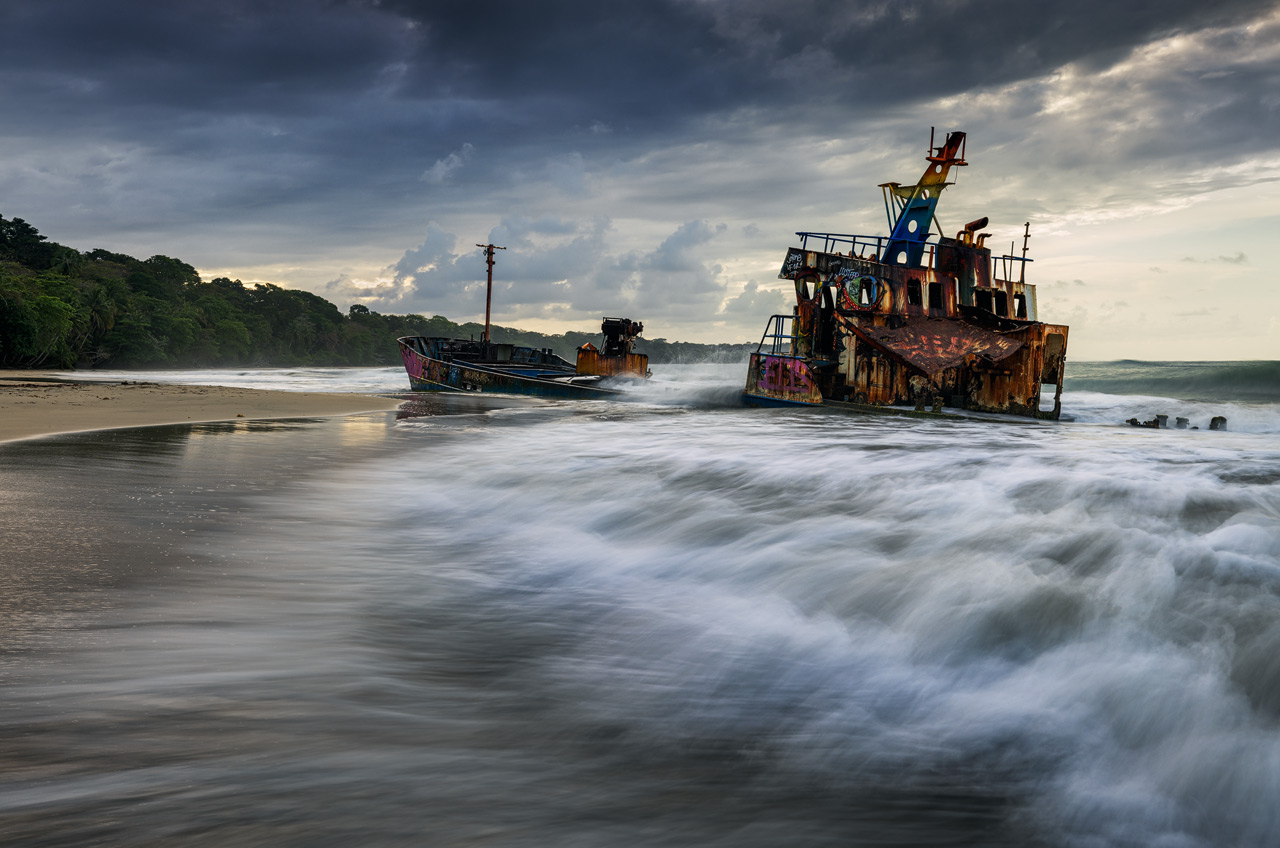 I want to close this article with some final tips about visiting the area around Puerto Viejo: