In the last article about my travels around the world I showed you the incredible landscapes of Tongariro National Park. After my early morning hike to photograph Mount Ngauruhoe we continued our journey with a drive towards Rotorua.

Rotorua is very popular for the geothermal activity in the area. Geysers such as the Wai-O-Tapu are the main attractions and we also couldn’t resist a visit. I have to admit that the colors and the smell alike were really impressive at the main thermal pool. 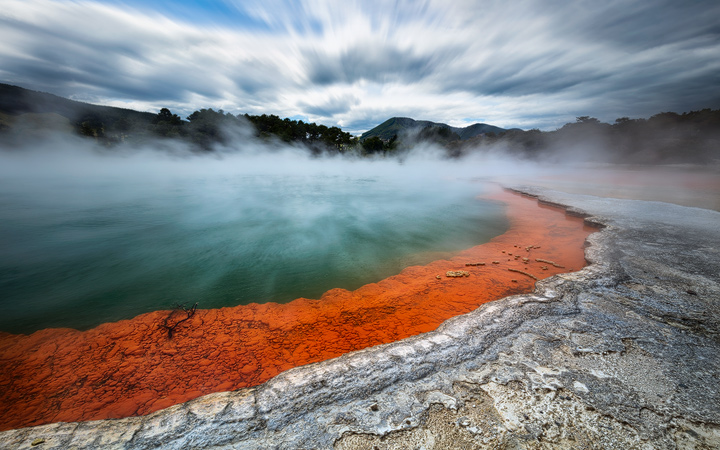 Another remarkable thing about Rotorua are the various hot springs. Even our caravan park had several pools that were fed by such a spring. And this was a great treat after all the hikes I had done the previous days in Tongariro National Park.

But what I liked the most about Rotorua were the beautiful Redwoods. Various trails span the forest area and although they are not as mighty as the Redwoods in California, they are still impressive.

In the end though, my favorite photo was not of the huge trees themselves. Instead I found this little pond with rotting branches submerged in it and it immediately caught my attention because of its shimmering blue color. 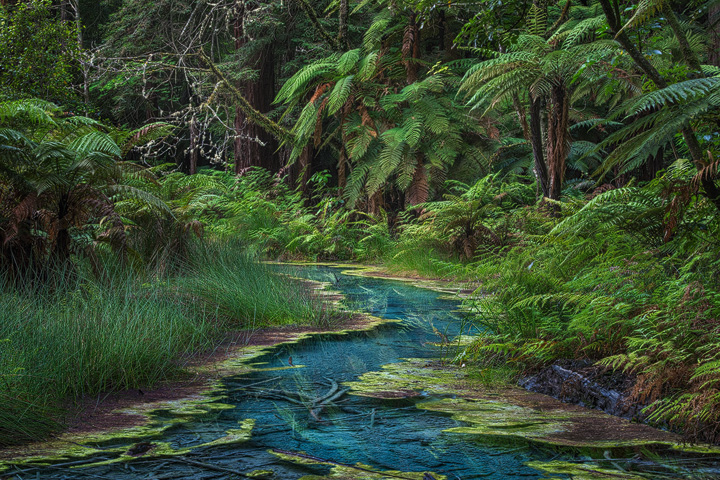 There were two more locations on my list for this trip to New Zealand. And although Coromandel would have been closer to Rotorua, we went down towards New Plymouth first because of the tides.

We spent two days at a caravan park near Mokau, which was just a 15 minute drive north of the famous Three Sisters beach. This particular beach can only be reached around low tide.

And on our second evening low tide coincided perfectly with sunset. I stayed there nearly till the end of civil twilight, which was when the sky began to glow one last time. I then took my photo of the day and afterwards had to hurry, because the tide had already turned. 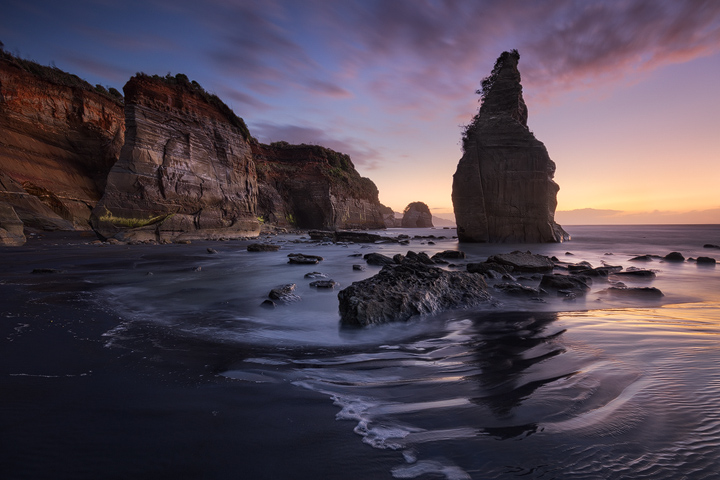 Of all the places we visited in New Zealand, Coromandel was the most crowded aside from the Tongariro Crossing on our hiking day. It’s just crazy how Hahei had changed since the last time I was there.

Back then there were only few people down at Cathedral Cove. This time the place was packed and even after sunset and long before sunrise there were many people, a lot of them camping down at the coast. Hahei itself now has huge parking areas on several meadows outside town, with a shuttle connecting them to the small parking lot at Cathedral Cove.

During the two days we spent in the area, unfortunately I didn’t have the necessary light to take a photo of Cathedral Cove, which would stand out. So I left nearly empty handed, just with a few snapshots and went up towards Whangapoua.

We had visited New Chums beach already on our first visit to New Zealand. It’s one of the most beautiful beaches on the North Island I’d say. But, same as Cathedral Cove, it also gets more and more attention these days. Thanks to its size though, there’s still enough space and it does not feel as crowded as the beaches around Hahei yet. 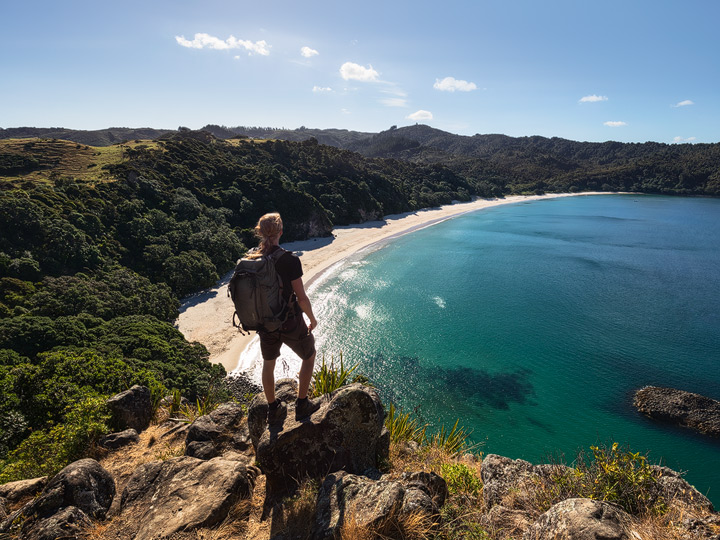 On this visit I climbed up to a fantastic viewpoint overlooking the beach. It’s quite steep and in parts a little sketchy but, if you are careful, it’s no problem to get up and down safe.

Originally I had planned to stay up there for sunset, but decided against it because after all I wasn’t travelling alone. There’s always balance needed between the pursuit of photography and the joys of travelling itself. And that evening we had a beautiful campsite right at the beach in Whangapoua where we cooked our dinner and enjoyed the evening.

Also, I didn’t want to risk a twisted ankle the day before our hike up to the Pinnacles, where we had reserved two spots in the Pinnacles hut. This hike was the true highlight of our visit to the Coromandel peninsula.

First we walked through some beautiful forest, crossing several small streams along the way. At a steady pace we climbed up the mountain until after less than two hours we reached the hut. The hut was still more than 100 meters of elevation beneath the Pinnacles peak but already provided beautiful views.

The ultimate view though is from the top of the Pinnacles and to get up there we had to climb some more stairs and ladders. This part of the hike is quite open and we were fully exposed to the wind, which picked up more an more as we went. In parts it was hard to stay on our feet.

The winds I experienced up at the top of the Pinnacles were the strongest I ever felt during a hike. The gusts were more than 100kph – due to some weather sites – and I had to be very careful to not get blown off the rocks. Taking a photo with tripod and DSLR during sunset was nearly impossible. I tried hiding behind a huge rock and using high ISOs and fast shutter speeds. But none of the photos I took turned out as I had hoped.

So I returned the next morning before sunrise, hoping for calmer conditions. But it was equally bad and despite the beautiful light I had to admit defeat and just took a photo with the Gopro. Then I sat on the rocks for a few more minutes, watching the sun briefly peek through the clouds, before I descended towards the hut and later to our campervan. 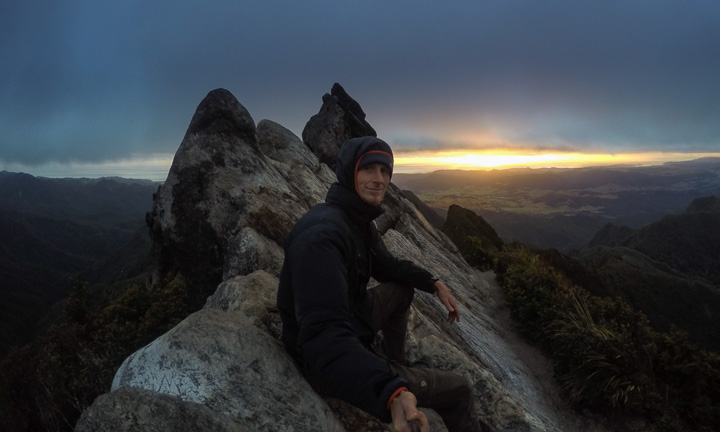 Later that day we drove to Auckland, spent another night at a campsite outside the city before flying to Hong Kong the following day.

All in all New Zealand gave us great memories once more. I was also able to capture several photos, which after two years now, I still consider some of my favorites of all time.

There were also photographical challenges again. Not all plans worked out and I had to abandon several of my photo ideas. But, as always, what stays after the first disappointment at not getting the photo, is the memory of having visited beautiful landscapes, of having put in the work, of the miles hiked and of the freedom I always feel when travelling.