March 10, 2019 | Behind the Shot, Landscape Photography | by Michael Breitung

For a long time it has been a dream of mine to visit and photograph the desert. While we travelled through Peru a few years ago we already went to a desert landscape near Ica. But despite the enormous dunes, this didn’t feel like a real desert. There was too much tourism and noise there.

On a recent trip to Morocco I once again had the chance to visit the desert. And not just any desert. With Wild Morocco we did a tour to the Erg Chigaga, which is part of the Sahara, the largest hot desert in the world.

But before we started our tour, we first explored the Medina of Marrakech for two days. And this was different to any experience I’ve had during my years of travel so far. I have been to crowded and busy cities in the past, especially in Asia. But the bustle of Marrakech and also the other moroccan cities we visited was different.

For one thing it was nearly impossible to take photos, especially with my large Canon 5DsR. Many people don’t want to be photographed, which I can totally understand. But even if I tried to just photograph some buildings or do a general cityscape photo, the looks I got were not very friendly most of the time.

Another thing, which is quite annoying, is that, even if you know where you are going – GPS on my self-phone worked pretty well – people will try to show you the way somewhere. It doesn’t matter, if you want to go there or not. There are always some youths trying to convince you that you have to turn left or right or that you cannot go there, that this or that is closed and so on. The funny thing is that nobody of them had just the slightest idea where we were actually headed.

Once I learned to ignore these folks I could enjoy all the new impressions I got while exploring the Medina. It’s like a huge mall full of colorful and shiny goods. And eventually I even found a view where I could take a photo of the city and even see the Atlas Mountains in the distance. 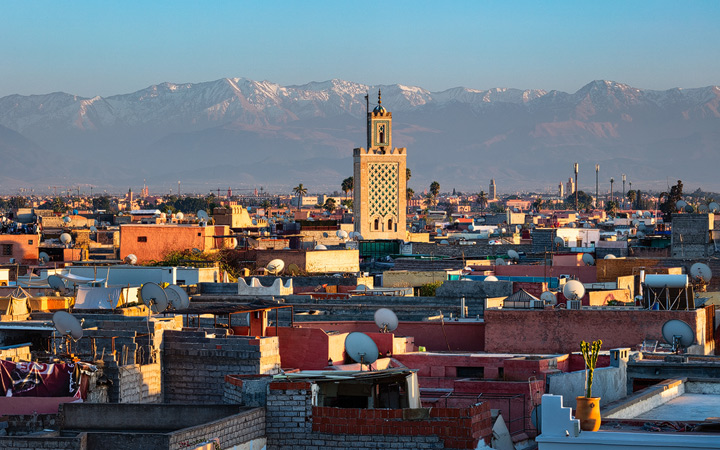 But it was still good to leave Marrakech on our third morning and head over the Atlas Mountains towards the Draa Valley. There we had a wonderful stay in the Hara Oasis lodge*. This place of silence was the perfect contrast to the city.

In terms of photography though I had some problems finding a good photo spot for sunset. When photographing with a wide angle lens, which is what I tried to do, it’s important to also have some interesting foreground in the frame. Otherwise the photos will often lack depth and interest. And this was exactly what I was struggling with.

The solution presented itself the next morning when I decided to take some photos with the long lens instead. Now I was able to focus on just the important parts of the landscape, its different layers and the beautiful morning light, as it crept over the mountains. 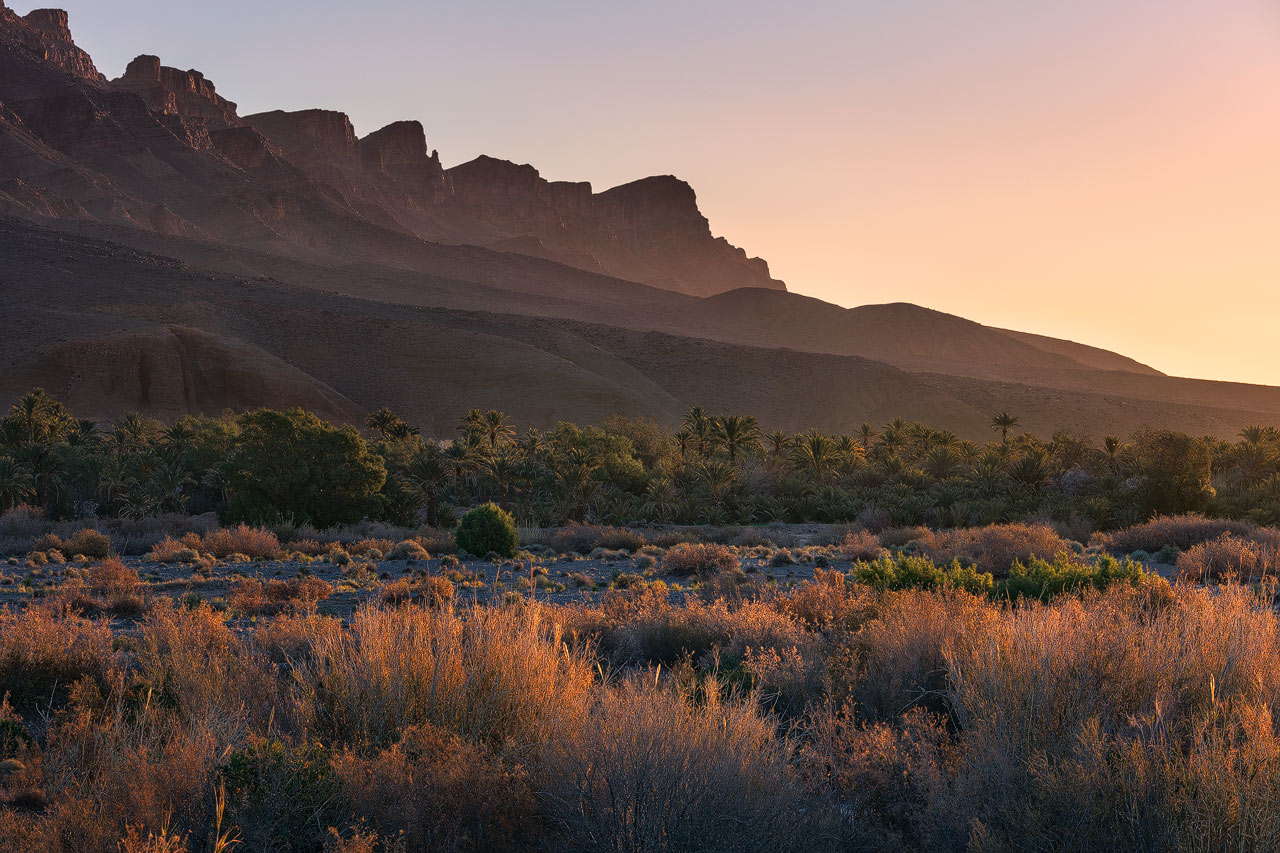 The following day we had another long drive past Zagora and Mhamid into the desert. After two hours of off-road driving, which I was glad I didn’t have to do myself, we finally arrived at the beautiful Camp Al Koutban. To get there you really need a guide who knows his way through the dunes.

Once at the camp we didn’t waste much time and with two hours to spare until sunset we started our hike towards one of the largest dunes in the Erg. After 45 minutes we crested the top of dune. It really was worth all the driving of the previous days and the hike. Such views were what I had dreamt of when I planned my trip to Morocco and finally I could photograph them. 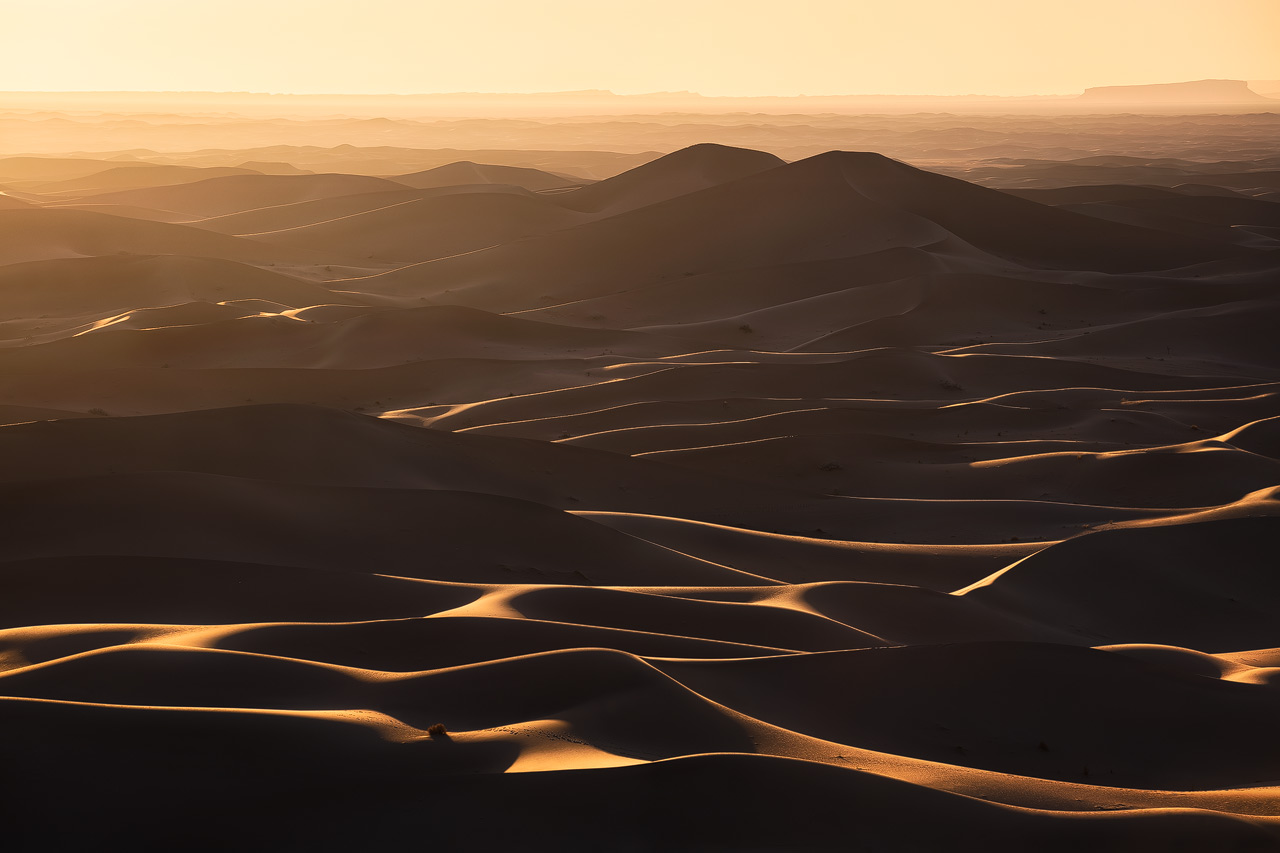 The way back to our camp in the dark was a bit tricky, but thankfully the GPS on my phone worked. So we just had to walk in the direction of the markers, which I had set in Google Maps in advance. After a great dinner with typical Moroccon food – the best we had during our trip – it was time for our first night in our cozy Berber tent.

The next morning I got up two hours before sunrise and once again found my way to the summit of the great dune. The wind of the night had cleared all footprints off the ridges and it was finally time to get out the wide lens. 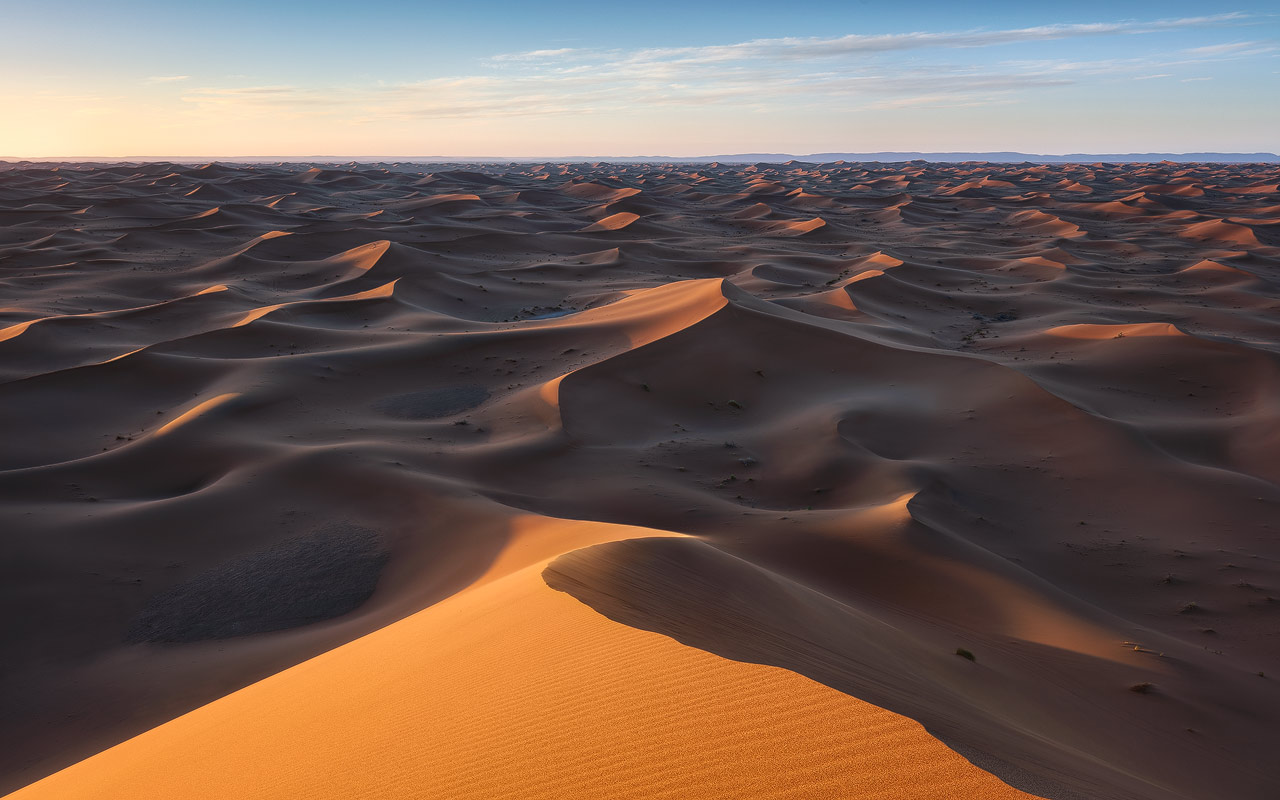 Besides taking all the photos I also recorded a Vlog, in which I show some behind the scenes footage and also more places we visited. So lean back and enjoy some impressions from Marrakech and some desert moods.

* This is a Booking.com Affiliate Link. If you use it to make a booking, I’ll get a little commission from Booking.com