After visiting the popular lavender fields of Valensole we continued our travels through France and headed north. Our goal was to drive up to Brittany, but this would have been a too long drive for just one day. So we did a half-way stop in the Auvergne mountains, right in the center of France. There I wanted to photograph the rolling hills around Puy de Sancy.

But first, as we arrived at our campsite near Mont-Dore, we had to wait out a rain storm, which later turned into a thunderstorm. So there was not much exploration or photography going on the first evening. Instead we stayed in our campervan and planned our hike for the next day, closely eying the weather forecast. Since the morning was forecast to be dry with spells of rain arriving in the afternoon, we opted for an early start.

Puy de Sancy is the highest mountain in the so called Massif Central of France with an elevation of just shy of 1900m. It is a very popular skiing area with cable cars going up the mountain from its northern side.

Those are also taking visitors to the top throughout summer and my estimate is that it can get quite crowdy up there. The walks around the summit as well as along the southward ridges are very developed. During my research I came across photos of boardwalks leading up the mountain.

This wasn't exactly what I was looking for in our upcoming hike. So instead we started in the north just a mile from our campsite at Le Salon du Capucin. Through the forest and then past the Capucin mountain we arrived at the lush meadows west of Ravin des Chèvres. This is where a beautiful ridge hike starts with endless views of the surrounding valleys and mountains.

But on this day we didn't see much of those. After all the rain we were still facing deep hanging clouds and fog for most of our hike. In between we got little glimpses of the glorious landscape and in the afternoon, on our way back to the campsite, instead of rain we finally got some sun.

While the photos I show above were all taken with my cellphone*, I also took a photo with my Canon EOS R5* after starting our hike down in the forest. The thick fog and wet vegetation created a beautiful, mystic atmosphere and the vibrant ferns provided the perfect foreground. 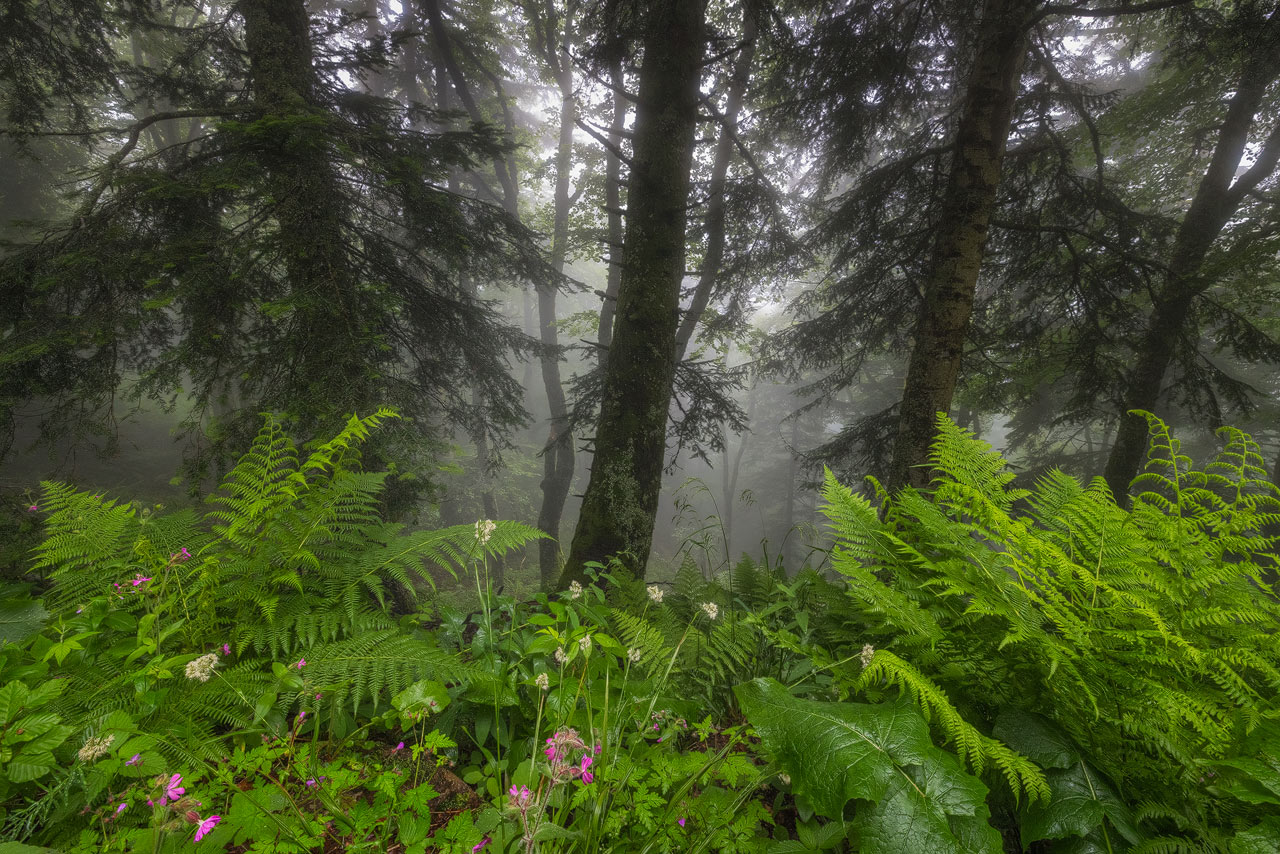 Unfortunately I cannot show you a photo from the summit of Puy de Sancy, which remained hidden in clouds most of the time. Because of this we didn't even bother to hike all the way to the top. Instead we spend some time on the ridge south of Val de Courre, to which I planned to return to the next morning for sunrise. Even shrouded in clouds the views were beautiful and provided some interesting photographic opportunities. 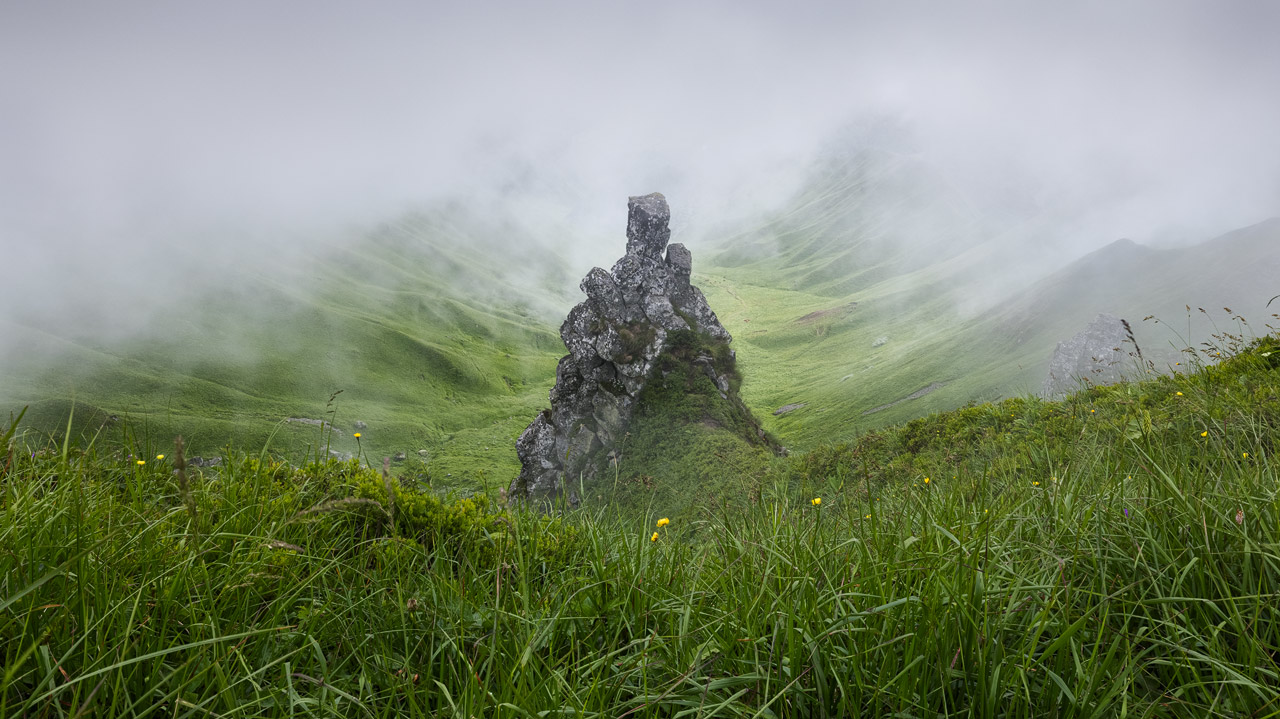 For the next morning I had planned an early start. I got up at just past 3am to start my hike up to the viewpoint, which I had scouted the day before. There had been more rain in the evening and the meadows were drenched.

I made a few mistakes that morning. The first was to leave my gaiters and waterproof socks in the campervan, because I didn't anticipate just how wet the meadows were. It was like walking through a river. The high grasses next to the narrow trail were constantly brushing over my trousers and not far into the hike my pants were soaked up to the hips.

My shoes also didn't fare any better. They are quite waterproof, but an hour of walking through wet grasses proofed to be too much for them. When I arrived up at the viewpoint the first thing I did was to empty my shoes from water. I can tell you, in the low temperatures of the morning it was not very nice to be up there in the dark with soaked pants and shoes.

But as the sun slowly began to rise and the pre-dawn light revealed a beautiful inversion in the distance as well as the lush green hills of the surrounding mountains it was easy to forget about the cold. I totally immersed myself in capturing my first photo of the morning, which features many of the beautiful flowers that grow along the ridges around Puy de Sancy. 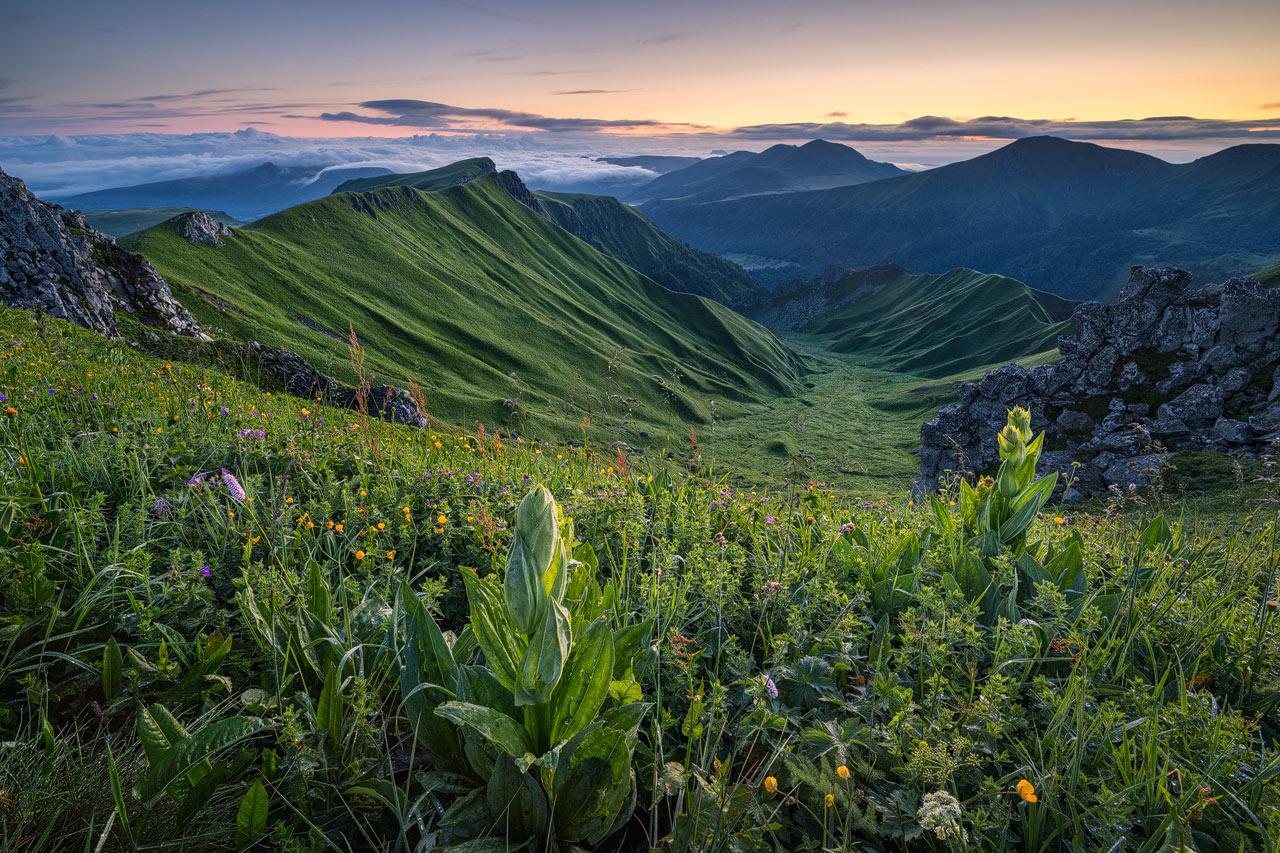 I'm glad I took my time with this photo, because afterwards I made my second mistake of the morning. I began to rush. With the light getting brighter I wanted to quickly take photos from as many different angles as possible. I no longer took my time and was too quick to abandon the compositions I found, constantly heading to the next potential photo.

As a consequence of that I'm not overly happy with the other photos I got. I could have done better, had I focused on taking maybe one more photo, which is what I normally do. But this morning I got a bit carried away.

The final mistake I have to mention is being too lazy to bring my long lens. The Canon EF 70-200 f/4 lens* would have been perfect to capture the distant ridges just after the sun had risen. I will certainly remember this for the future, when I plan my next mountain hike.

Now, if you are also interested in some moving pictures from the Auvergne mountains, then make sure to watch the first part of the following video. There I show you some behind the scenes of the ridge hike and the morning shoot. The second part of the video already covers my first days in Brittany, which my next article will be about.