If you followed my trip through France thus far, you know that the weather had been a bit of a challenge. But I had also been presented with some beautiful conditions, especially during my morning hike in Auvergne. So what would the coastal weather up in Brittany be like? There I wanted to start the third leg of our travels through France by photographing the Crozon peninsula.

But getting up there would have been too long of a drive in a campervan for a single day. So our first stop at the coast was a few miles north of La Rochelle. In La Tranche-sur-Mer we spent two nights at one of the many campsites.

The coast around La Rochelle is not very spectacular with mostly long, flat beaches. So I didn't expect to find many photo opportunities there. Yet, during a run I found a beautiful subject with potential for sunset. As I already wrote in the first article, running has become my favorite way of scouting lately. Not only do I get some exercise during my travels, but from time to time I also find little gems like in the photo below. 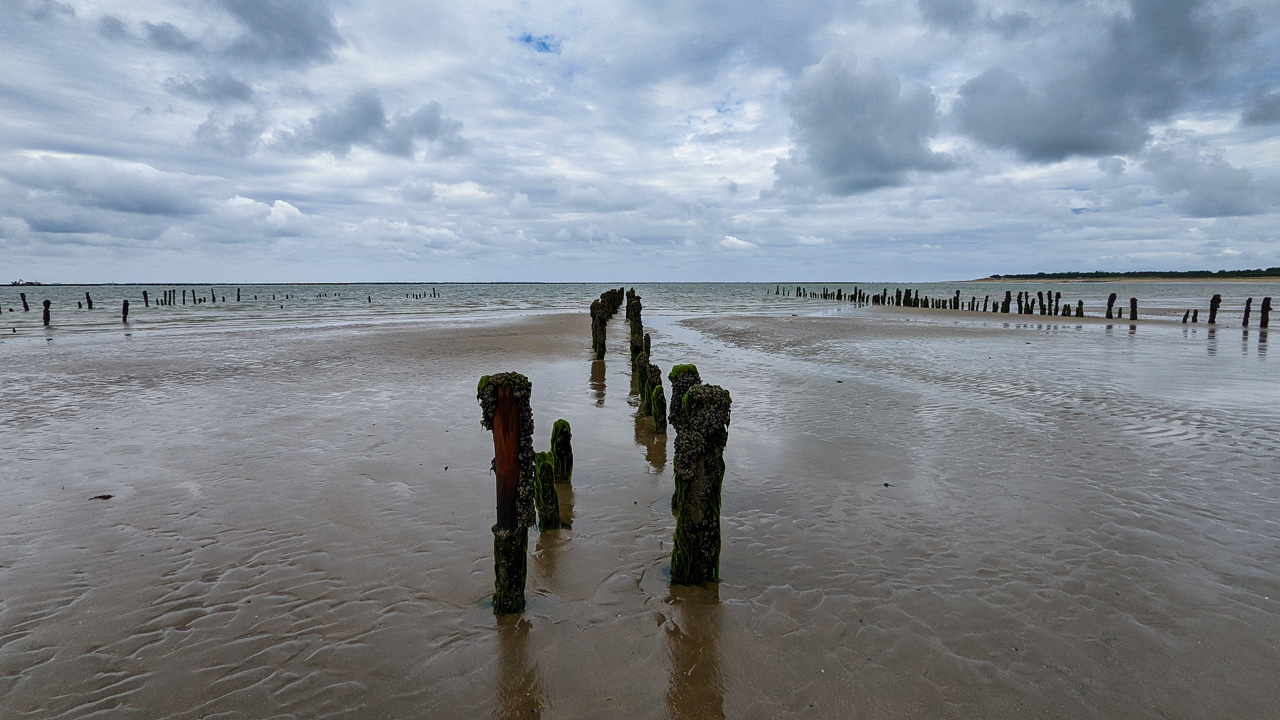 Those poles are used for mussel farming. This means that at low tide they stick out of the water and at high tide they are deeply submerged. So in order to photograph them for sunset I needed low tide to coincide with the setting sun. I use an app called Nautide or the page Tides4Fishing to check tides and they told me that about three hours before sunset the tide was beginning to recede. My hope was that it would recede far enough till sunset. 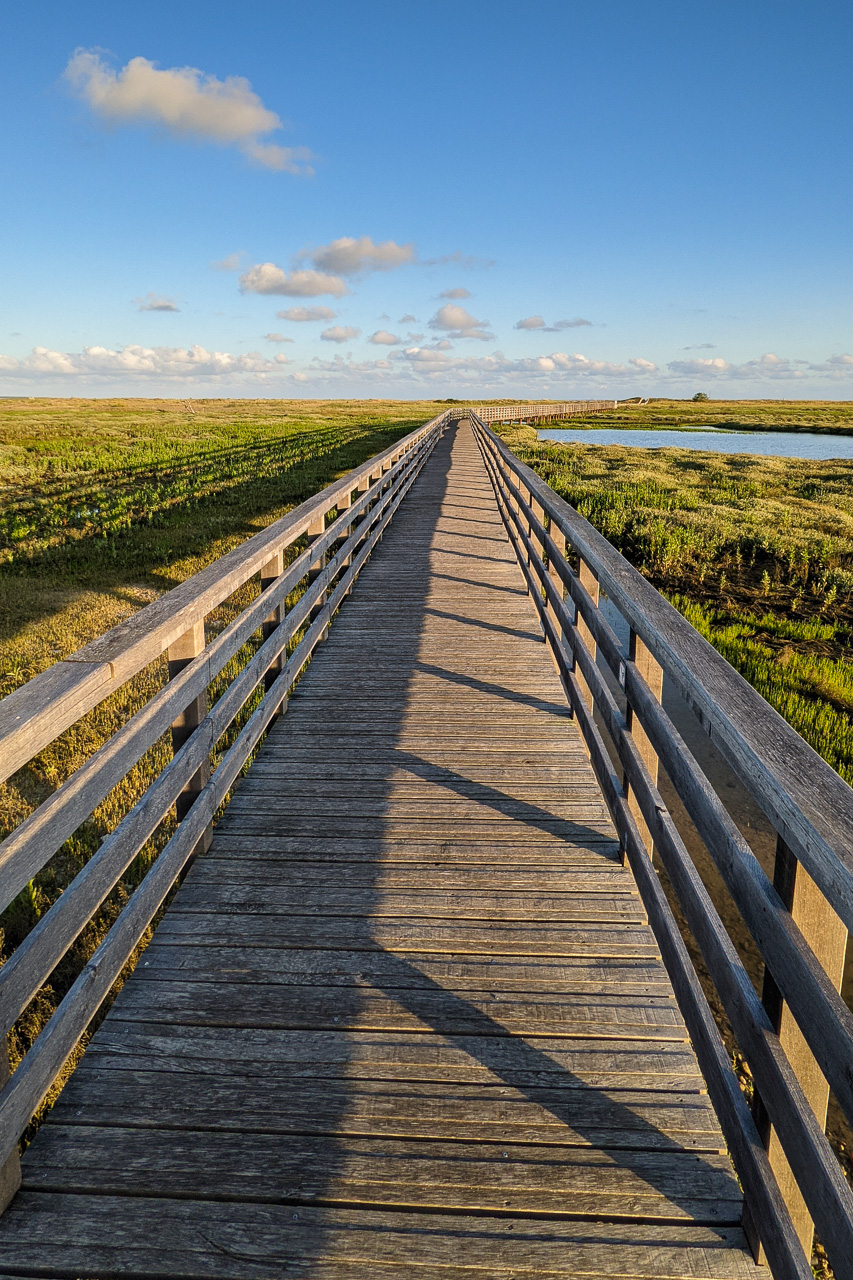 As I went back in the evening the light was beautiful as I walked along the jetty leading to the coast. I just snapped a photo with my cellphone*, trying to quickly get to my subject at the beach. Unfortunately the tide was still too high. It would have been dark already until the poles emerged from the water, so I returned without a photo.

This is how it goes sometimes – or should I say quite often. I plan and scout and still don't come away with a photo. There are a lot of variables to a photo shoot, which I cannot control. And it's good that way, because this is part of the excitement that comes with landscape photography for me.

On our way from La Tranche-sur-Mer to Crozon we made a final stop. There's a beautiful medieval town called Locronan, which we passed just a few miles before entering the Crozon peninsula. The old stone buildings, the narrow streets and the fact that no cars are allowed to enter this village give it quite a unique atmosphere.

And then there are the great Crêperies like the Crêperie Les tres Fées. I think during our time in France we ate Crêpe at least every other day and here we had one of the best.

Since we only made a short stop around noon, I only captured the village with my cellphone* again. But I would imagine that this place does also look beautiful during blue hour. Maybe one day I'll return for that. 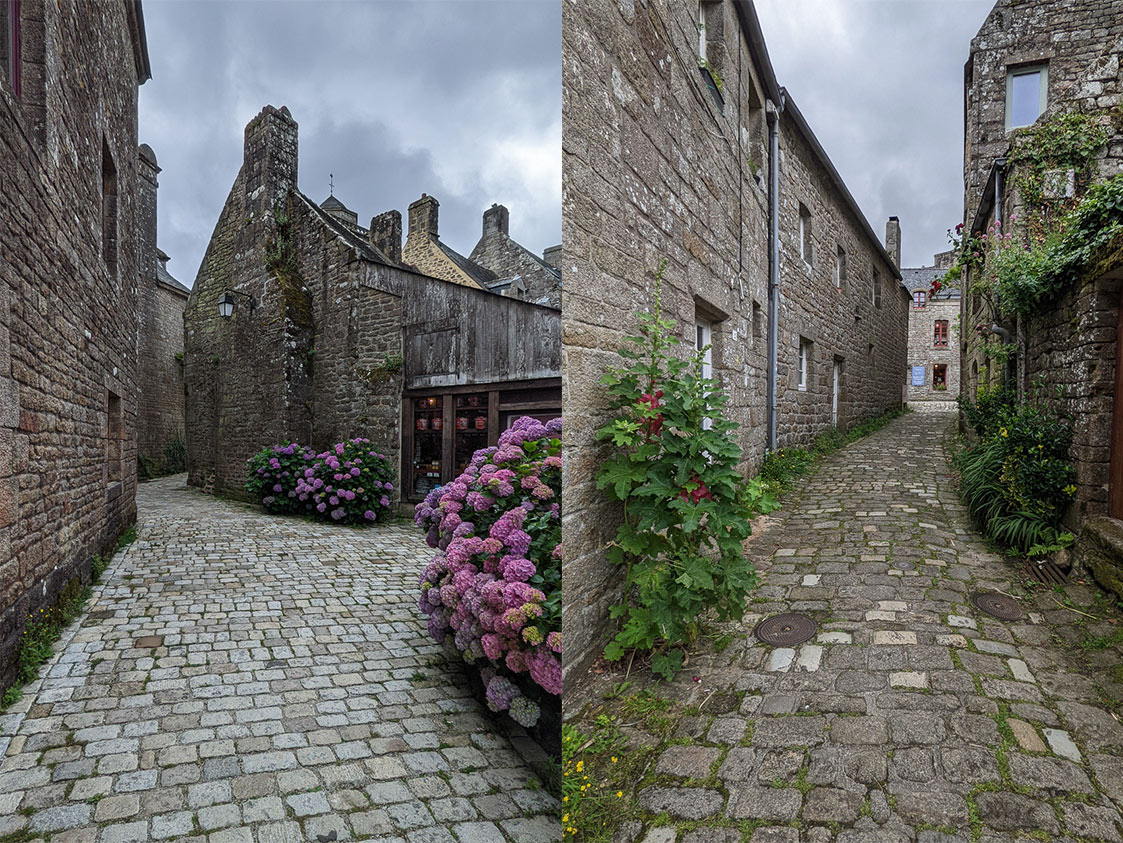 I had been waiting to photograph the coast of Brittany for the whole trip. And its landscape with it's steep cliffs and wide beaches didn't disappoint. After we secured our spot at the local campground in Camaret sur Mer I directly went on a run towards Pointe de Pen Hir. This part of the Crozon peninsula is spectacular and quite a bit overwhelming in terms of landscape photography.

There's seemingly so much to photograph but once I started to look closer for compositions, I realized that it would be quite a challenge to do this place justice in a photo. With my cellphone I took some test shots during the scouting run and for two of those I decided to return for sunrise and sunset the next day.

And I was lucky with the weather. After a rainy night the sky opened up around sunrise and some spectacular light emerged from the East. The photo I took is ok, but not great. Despite the beautiful conditions I think that this location would have been better photographed around sunset. The cliffs on the right side are in shade and this unbalances the photo for me. 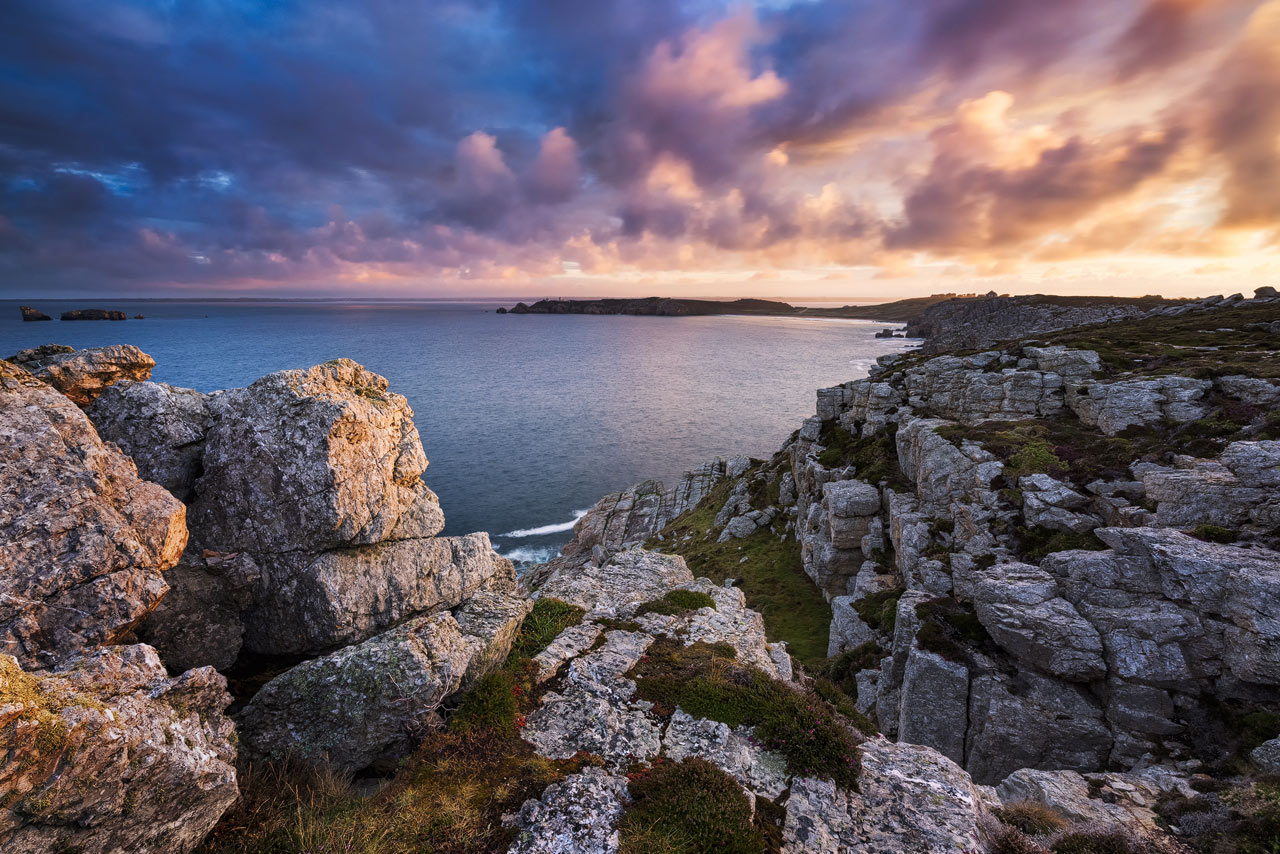 But for sunset I already had another composition sought out. The massive sea stack jutting out of the water a little farther down the coast was even more in need of light coming from the west and so I focused on this subject in the evening.

There lies only one kilometer between the two subjects and it would have been possible to capture both with a little sprint in between. But this is seldom a good idea. I'm no friend of hectic photo shoots and I rather take my time fine-tuning just one photo. Expecially when photographing seascapes and setting up at steep cliffs there’s nothing worse than being in a rush.

Instead I had enough time sitting on the rocks above this sea stack watching the sun go down, while pressing the shutter of my Canon EOS R5* a couple of times. 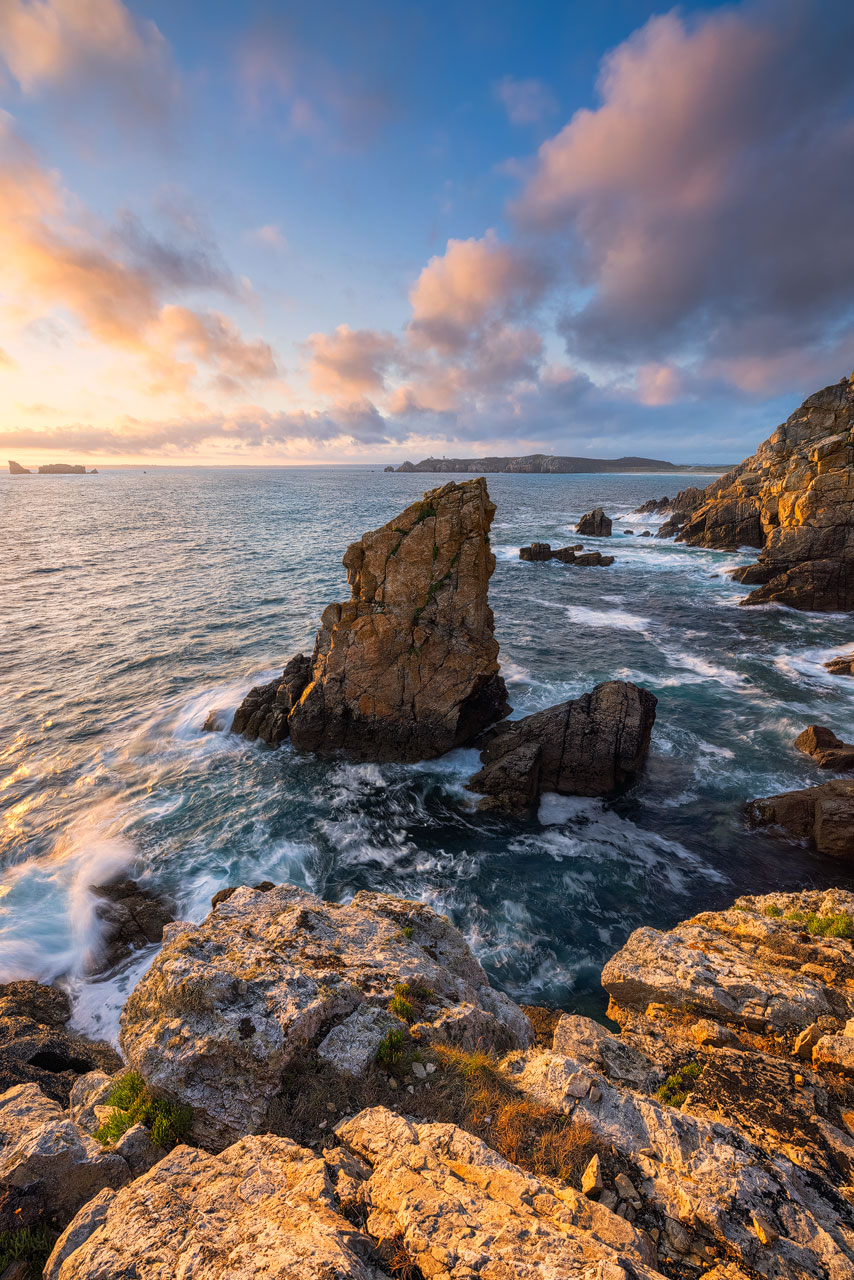 Behind the scenes Video

If you are interested in more footage from this part of our trip through France, make sure to check out the video below. In the second part I talk more about the photo I took around sunrise in Crozon and I also show you the interior of our great campervan from Hannes Camper.