Photographing the Lavender Fields of Valensole

Back in July my girlfriend and I traveled through France in a campervan from Hannes Campers for two weeks. Within that time we drove more than 4000 km, starting down in the Provence region where I photographed the lavender fields of Valensole. After a brief stop in the Verdon Canyon we then visited some mountains in the center of France before finally driving up to Brittany to conclude our trip.

In this article I'll share my photographic experience for the first part of this little tour de France. It had been five years since I had first visited the lavender fields of Valensole. Back then, despite staying for a whole week, I wasn't able to capture one spectacular photo. Clear, blue skies made this endeavor impossible. So how did I fare during my second visit? 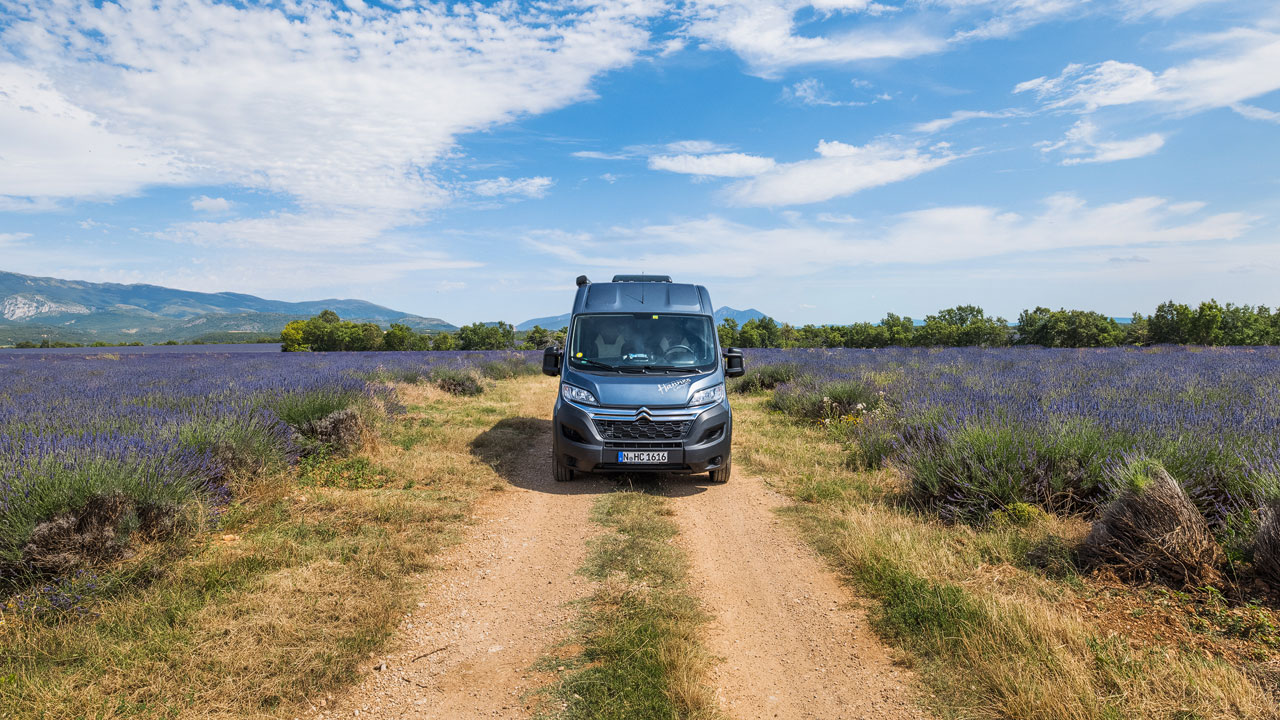 Whenever I visit such popular places as the Valensole plateau, which have been photographed millions of times, I tend to set the bar for the photos I want to capture quite high. A beautiful subject and a good composition are seldom enough to take a photo that can stand out. And in a place like Valensole this is even more true, because finding a good subject is quite easy. Everybody can do it with the endless lavender fields in every direction. Compositionally it's also relatively straight forward with the lines of the lavender fields leading the way.

So to stand out, one has to get really special light and weather conditions and at least the forecast looked promising this time. 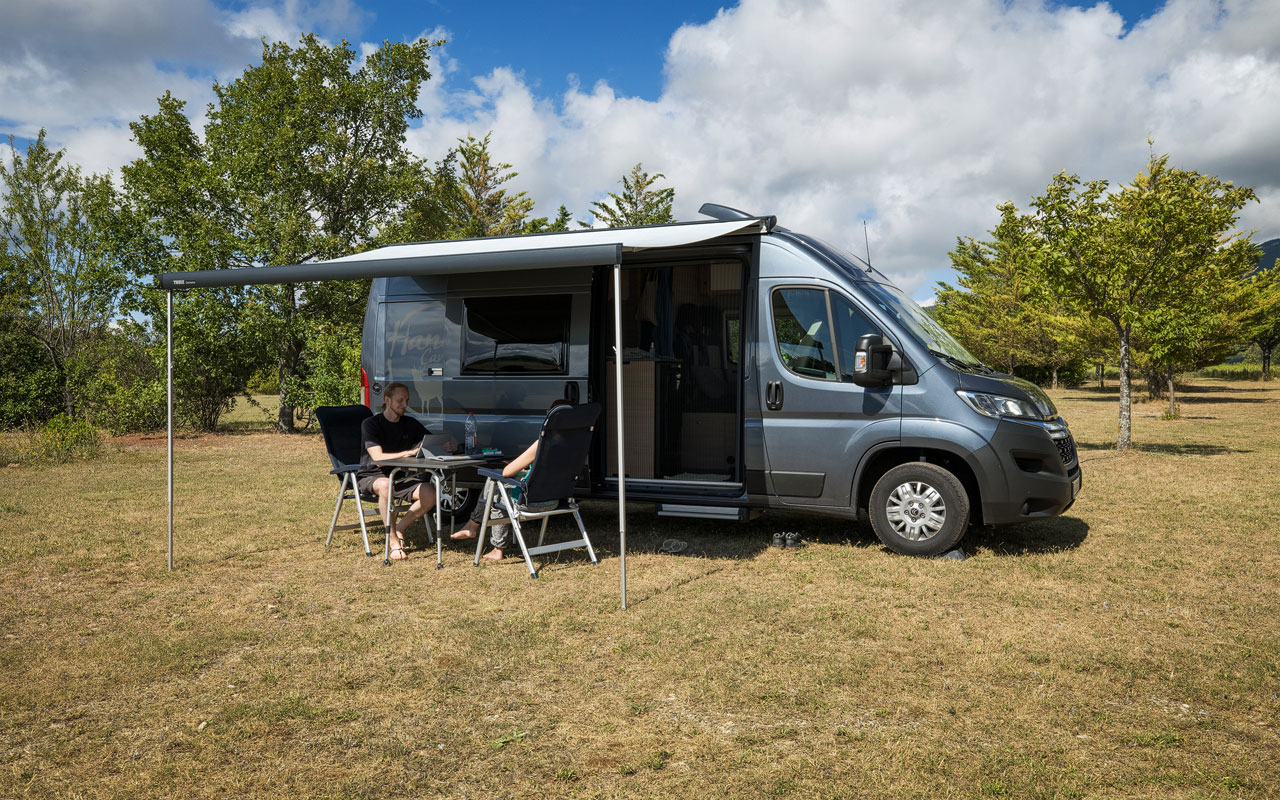 As we arrived at our campsite at the edge of the plateau, which I can totally recommend to anybody planning a visit with a campervan, I didn't waste much time and went on a run to scout for subjects and compositions. This has lately become my favorite way of scouting. I can cover between five and 15 km in a close enough radius around the place where we are staying and with my cellphone I can explore compositions along the way. 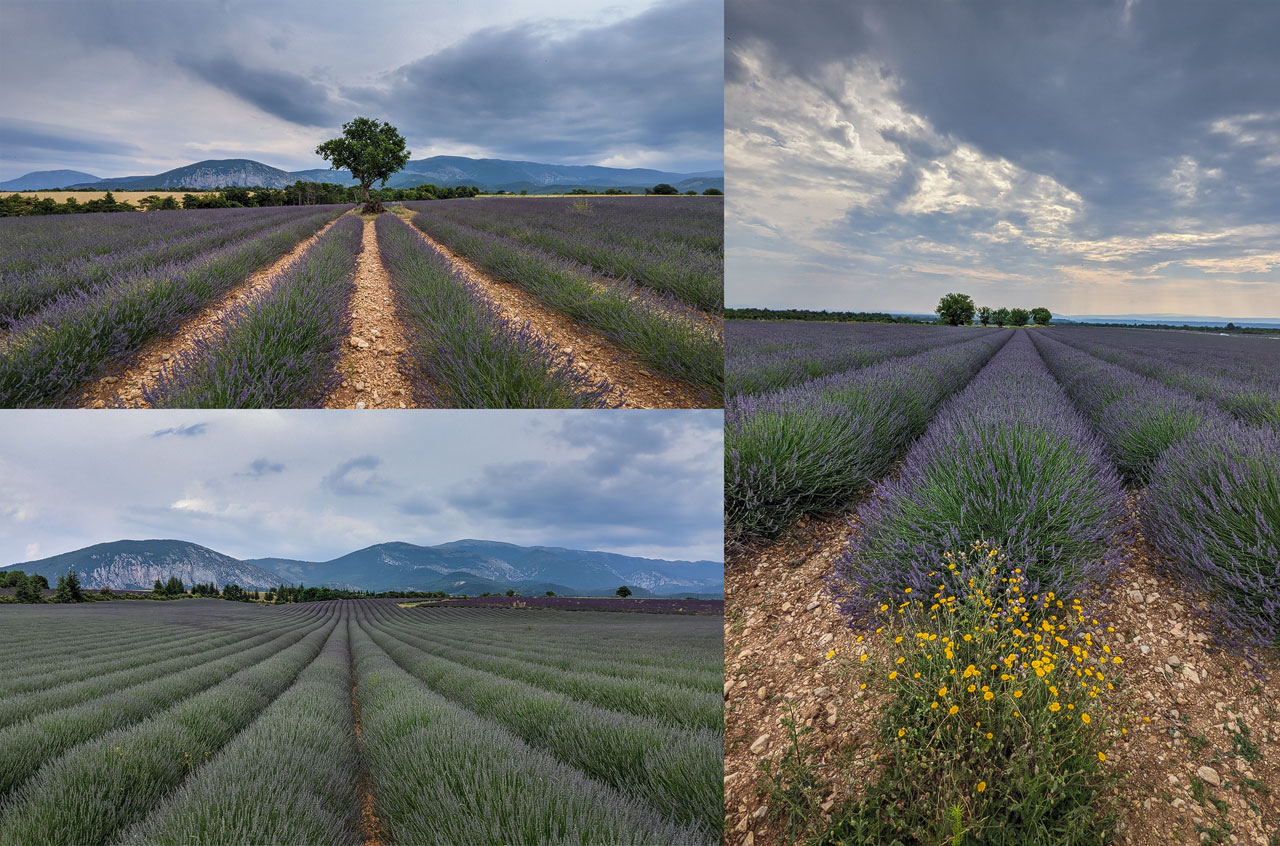 It didn't take me long to find some nice fields, so for the next two to three days I would have enough options to photograph sunrise and sunset. Now, if only the weather would play it's part.

Which it didn't. The first evening, low clouds in the west prevented any color in the sky. The next morning the sky was glowing in all directions except for those in which I was photographing, and on the second evening it was so windy that I had to resort to high ISOs between ISO 800 and ISO 1600 to freeze the motion in the lavender. Morning number two provided only clear skies. 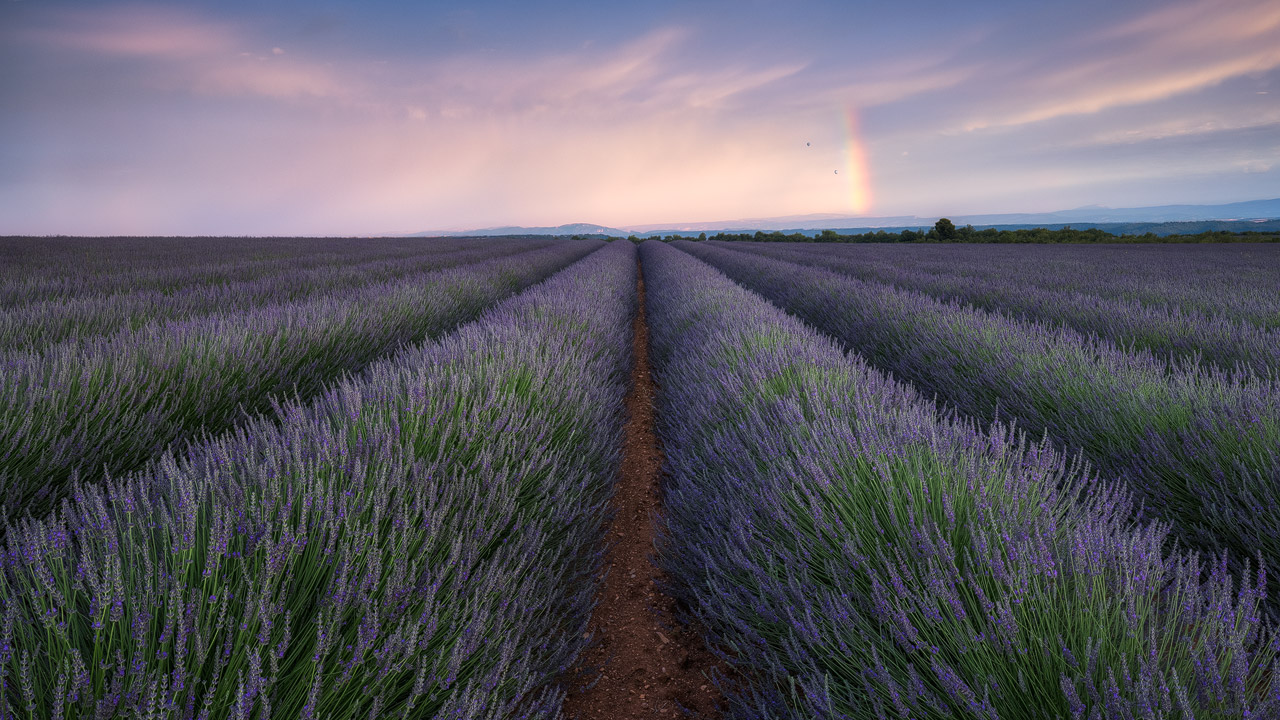 But I still managed to capture a photo, which I like. The photo I show above with the partial rainbow over the lavender fields was taken the first morning. It was not the photo I had set out to capture – I was actually hoping for some side light on the lavender fields. But although the sun never really broke through the clouds that morning, I think that the soft light in the foreground actually fits this scene quite well.

During the first two days in the area this was the only photo that made it into my portfolio. In the behind the scenes video below I also present you the photo I captured on the windy evening shoot on day two and I also show you how the light was teasing me during sunrise that same day.

Not far from the lavender fields of Valensole lies the spectacular Verdon Canyon. During my first visit to the region I had done a lot of scouting there, so this time I already knew exactly where to go. The most spectacular views, in my opinion, are along the Route des Crêtes and a great place to stay with a campervan is the Camping Campagne de Boulogne. Starting directly at the campsite is a hiking trail up the mountain that will take you to the best viewpoints within 45 to 60 minutes.

We had only planned to spend one night there because of our tight schedule, but the campsite is so calm and beautiful that you could easily spend two or three days. After setting up camp we started our hike up to the viewpoints. The sun was burning and there was only limited shade in the afternoon as we made our ascend.

Up at the first viewpoint I spent about 45 minutes trying to find the best vantage point at the edge of the canyon. While the view is spectacular, finding a foreground that complements it isn't easy in this place. I took many test shots with my cellphone to later compare and in the end this composition felt the most balanced. 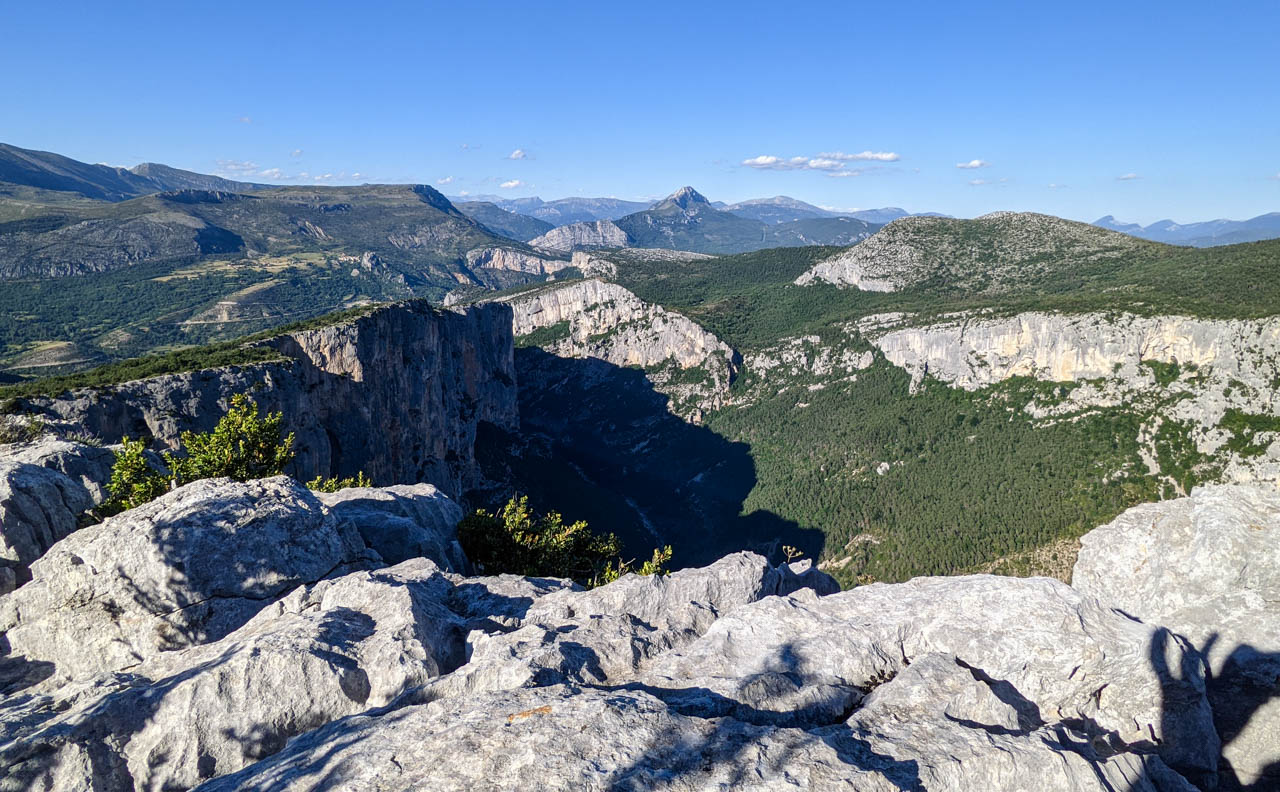 The plan then was to return around 3am at night to photograph moonrise over the canyon. Since there would be no clouds for sunrise according to the forecast, this seemed to be the best option to still take a special photo.

I got up at 2am and hiked through the dark. Without the prior scouting I would have had a big problem. Not knowing where to go when photographing at the edge of a cliff is quite dangerous. It also would have been impossible to find a good composition with just a flashlight. 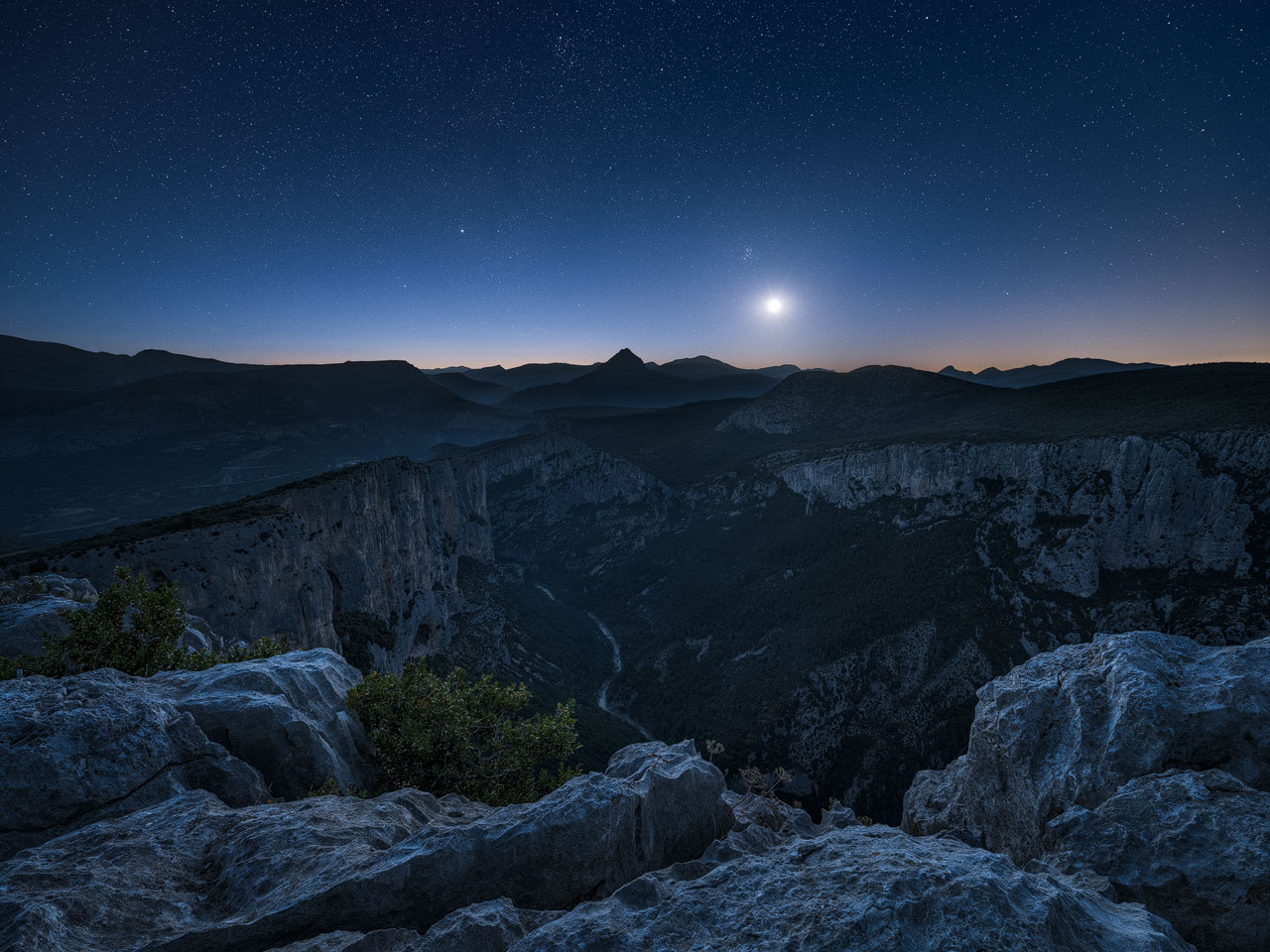 But thankfully I knew exactly where to put my tripod and so I started taking photos of the rising moon and the stars just past 3am. Then I left my tripod in place and took a 90 minute nap on some rocks before I finished the shoot by photographing the foreground during blue hour. The result you see above is a time blending of more than 30 photos for the night sky and four photos for the foreground. I have a detailed tutorial on this photo editing technique available, if you are interested.

Storm over the Lavender Fields

Because I had taken just one good photo of the lavender fields so far, we decided to spend an additional night at the campsite where we had stayed the first two nights. But before that we wanted to enjoy the Verdon Gorge from below. At Lac de Sainte-Croix you can rent a kayak for about 20 Euros for an hour. It was more expensive than I remembered it from five years ago, but we had good memories and so we did it again.

This time though we didn't like it at all. It was overly crowded and nobody seemed to look out for the other boats and kayaks at all. It was just a chaotic frenzy of boats we had to navigate our way through to get deeper into the canyon. 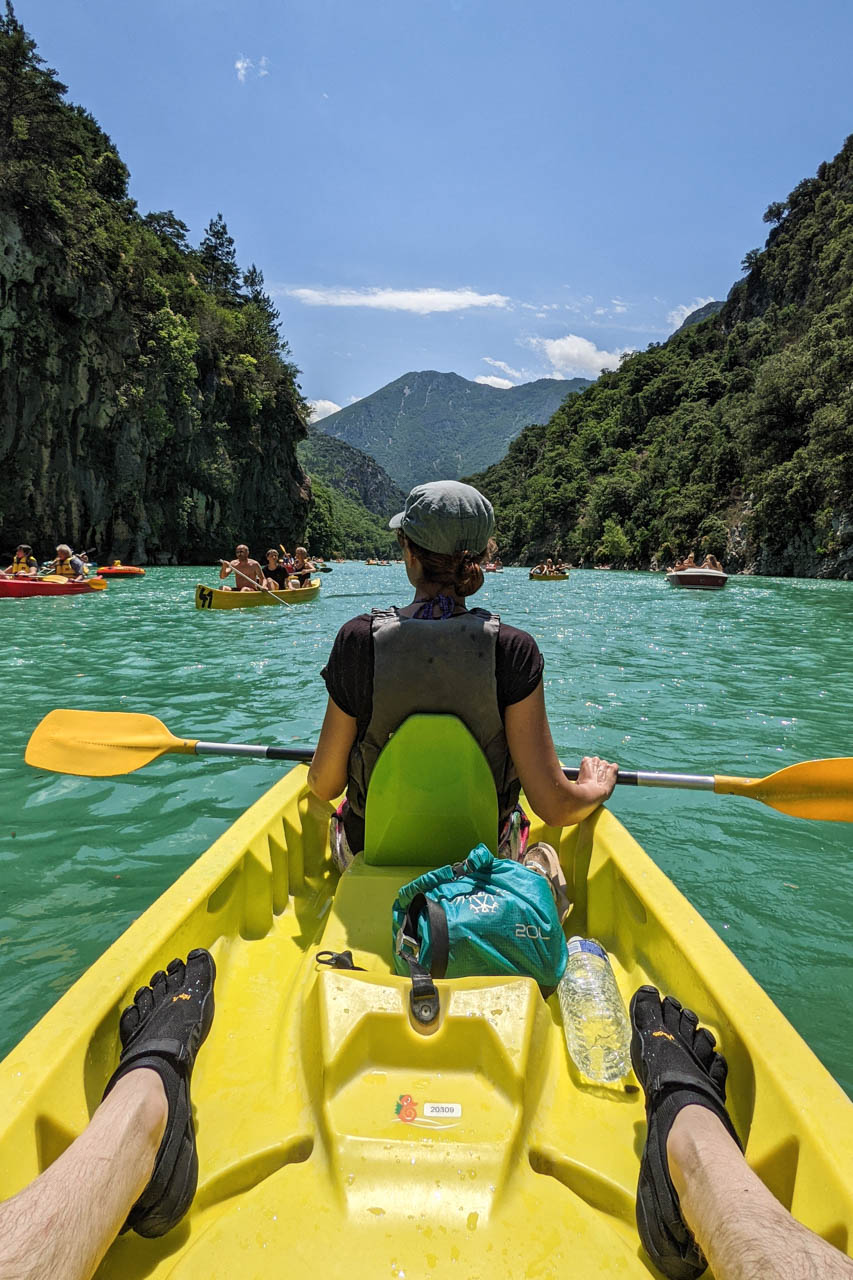 So back at our campervan we couldn't wait to get back to the secluded setting of the La Ferme de Vauvenieres campsite. As we arrived I immediately felt the wind again that had already made photographing the fields difficult the first days. Combined with deep clouds in the West this prevented a spectacular sunset yet again. So I had one final morning to get some favorable conditions. 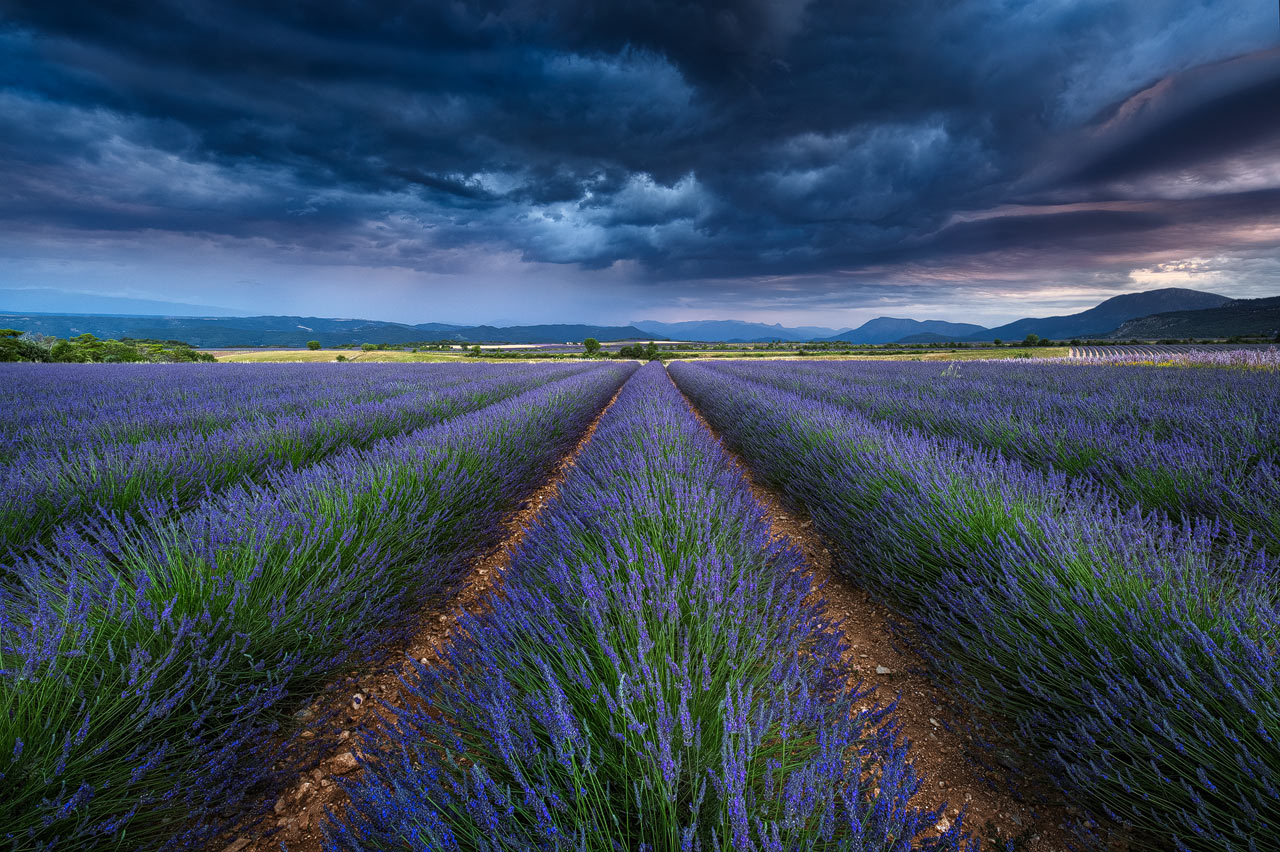 This time it finally worked out. As storm clouds were drifting by at the horizon, the fields in the foreground were completely calm. I could take long exposures without so much as a stem of lavender moving. This was the perfect way to conclude our stay in the South of France and I finally felt ready to continue our trip.

So lets recap. In the beginning I talked about setting quite a high bar for the photos I wanted to capture. Looking back now I'm not sure, if I achieved my goal of taking photos that can stand out. The photos I shared will end up in my portfolio, but I guess I have to return some more times until I'm finally satisfied with the results.

Funny enough, the photo I captured in the Verdon Canyon, where I didn't get any spectacular conditions, has grown on me quite a bit since returning a few weeks ago. It might even be my favorite photo from this first part of the trip. At this viewpoint it was hard to come up with a composition that would showcase the subject at it's best, but I think I achieved that. Also, deciding to photograph the canyon at night was the right decision, because the atmosphere this created is quite special despite the lack of clouds. What also goes into it are the memories of sitting there at the ridge in complete silence, watching the stars and the moon.

And that's what it is really all about – the experiences you have while being out in nature and the memories you make.