Finally it was time to visit New Zealand’s highest mountain, Mount Cook. On the long drive up to the national park I was hoping that it wouldn’t be shrouded in clouds as it was when I drove towards Lake Tekapo a week before.

I was lucky. The clouds had lifted a bit and I could already see the peak from afar. As I arrived at the DOC campsite, which I had selected to stay in for the night, I didn’t waste much time and directly went onto the track towards Hooker lake.

What a wonderful hike that is. Surrounded by snow capped mountains I walked through a beautiful landscape full of tussock grass, on large suspended bridges I crossed a roaring river of melt water to finally arrive at Hooker lake with Mount Cook rising steeply in the distance. 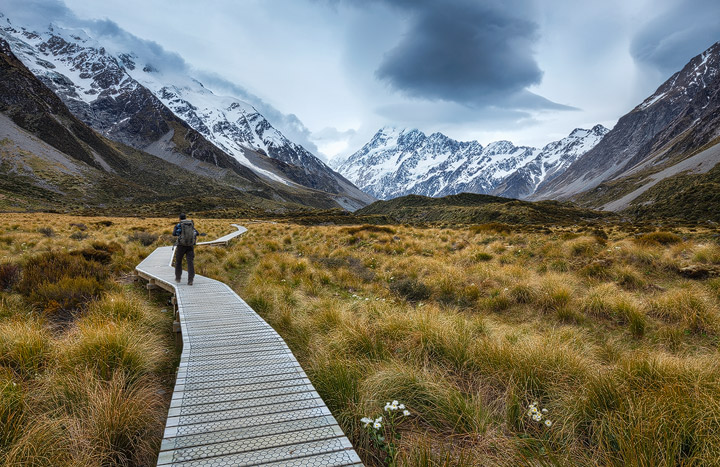 By then clouds began to settle over the valley again and the wind picked up, but it was still comparably warm in the park. I spent some time at the lake, enjoying the view and trying to photograph the floating icebergs before hiking back to the campsite.

After some rest and a hot meal it was already time for my next hike, which was the final one of my New Zealand trip. In the New Zealand Frenzy books I had read about the trail up to the Sealy Tarns. It starts right next to the campsite and consists of somewhere around 2000 stairs of varying height, roughly hewn into the mountain.

It took me half an hour for the 500 meters of elevation and when I arrived at the tarns I was exhausted. I had also left the shelter of the mountain and the wind was blowing as fierce as ever. I did my best to get some photos of Mount Cook and Hooker lake but it was hard to keep the camera still. 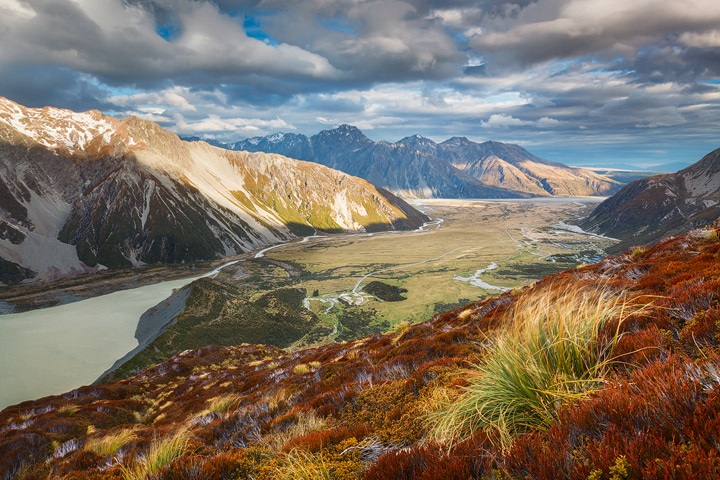 In the end I settled with a photo into the other direction, showing the beautiful valley I had driven through from lake Pukaki in the morning. Despite this wonderful view I didn’t linger too long and started my walk back down the mountain before it got completely dark. With those winds I didn’t want to risk too much on my last day in New Zealand.

The next morning it was one last drive with the campervan to Christchurch from where my plane was leaving. After four weeks of travelling around the North and South Island of New Zealand it was hard to say goodbye. The weather might not have been the best, but the landscape and the atmosphere of this country made it easy to forget the rain. For me it is the most beautiful country I have visited till now.

I can’t wait to retrun to the other side of the world next december to spent some more time on the North Island. That time I’ll be more flexible and hopefully the weather will allow me a hike up to Mount Tongariro then.