After spending one week on the North Island of New Zealand I took the Interislander Ferry from Wellington to Picton and started to explore the less populated South Island. After a lot of rain in the past days Picton greeted me with sunny skies.

But I didn’t linger and directly hit the road to Kaikoura. The drive down there took me through a very different landscape. Along the east coast of the South Island the land doesn’t look as lushly green as for example on the Coromandel Peninsula or in the hills around Hobbiton. Between Blenheim and Clarence you’ll find a lot of vineyards between hills that look a little bit dry.

After leaving the hill country the coastal drive begins and it was a pleasure. The sea on this sunny day looked unbelievably blue. Although for landscape photography clear blue skies aren’t ideal I didn’t care much. The warmth that came with the clear sky was a nice change. This was the first day of my New Zealand travel that felt like summer. 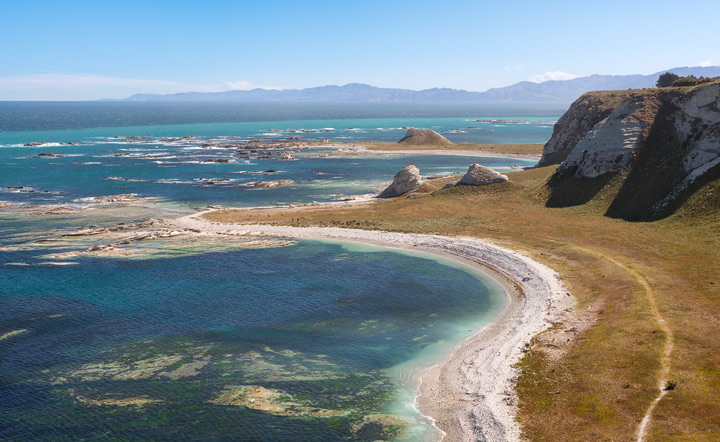 Kaikoura is a nice town on a small peninsula halfway between Picton and Christchurch. It’s famous for Whale Watching. The sea is very deep there, just a few miles off the coast there’s an underwater canyon and this is were the boats of Whale Watch Kaikoura will take you, if you book a tour with them.

I did so and I even saw some Sperm Whales. But this wasn’t the most exciting part about the tour. It was very windy when I went and the two hours on the boat felt a bit like a rollercoaster ride. The waves were much higher than the boat and it was a continuous up and down. I didn’t have many problems with it, but soon the first people around me started pucking into their barf bags. So when we were back at the harbour I was glad to have solid ground beneath my feet again.

Besides Whales there are also large seal colonies around Kaikoura. At Ohau Point I saw many of them right next to the road. But the real highlight was the short hike to Ohau Falls. This little waterfall is kind of a playground for seal pups and I felt very lucky to see so many of them.

Another reason for me to visit Kaikoura was it’s spectacular location. The Kaikoura mountains start directly at the coast and at the end of the town is a very popular photo spot with some interesting rock formations, which you have to shoot at low tide. I went there early in the morning when the stars were still out. The evening before I had already scouted the area for possible compositions and in the morning after some fine tuning I started taking long exposures. 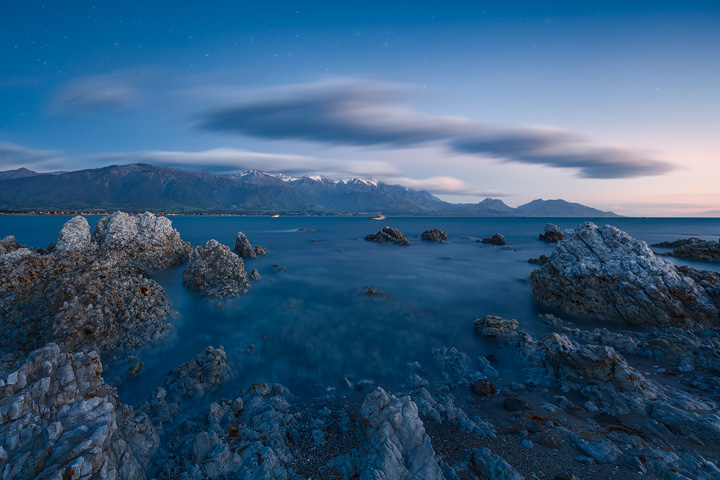 The two days in Kaikoura I stayed at the Point B&B, which is such a great place. The best photography spots are all in walking distance and every day they have a little sheep shearing show. This was very entertaining and even if you don’t stay at the B&B I’d recommend to visit for the show and for a chance to feed the ram.

It was hard to say goodbye to Kaikoura. As usual I had checked the forecast again and for the next destinations of the trip it didn’t look so promising. But I couldn’t help it. Four weeks is a very limited time to travel New Zealand and, if I wanted to drive around the South Island, I had to be on my way again.