On the northern tip of New Zealand’s South Island lies the beautiful Wharariki Beach. It’s a bit of a drive up there, especially with a campervan. Past Able Tasman National Park where most tourists will stop, you have to drive the Takaka Hill Highway. This is already an experience by itself as the views get better and better during the long and winding drive up into the mountains.

From Kaikoura it took me somewhere between four and five hours to get to Wharariki. The last five km were on gravel road. It was in good shape and there was no problem with the campervan though. At the end of the road is a very nice campground, just where the walking track to the beach starts. I stayed there for two days, most of the time having the whole area for myself.

From the camping area to the beach I had to walk for around 15 minutes. I went for a first scouting trip in the afternoon and was greeted by strong winds, the strongest winds of the trip so far. The westerlies were back and I really had to fight my way along the beach. The locals told me that those winds are quite natural around November and will usually calm down in late summer.

There is also the possibility to access the beach from the western side and then walk it with the wind in the back, which I did the next day. But in the evening I wanted to photograph the beach from it’s eastern side for sunset, directly facing the wind. So I had to do some preparations to keep my camera safe in this little sandstorm.

This video was captured the next evening in the absence of great light and with lesser winds. It shows how I made sure that no sand would reach my camera with a custom made cover and some additional taping and platic. The back of the camera was facing away from the wind and it was safe to leave it open so I could access live-view and controls. I have to say that the Lee filters I was using held up very well against the sand.

But back to the first evening. I’m not sure how it is during other months, but in November not many people seem to visit this beach. The nearly two hours I photographed it for sunset I had it completely for myself. More than one mile of awesomeness lying in front of me. Huge sea stacks rising out of the stormy sea, the wind blowing sand into my face, dark clouds looming behind me and in front of me a beautiful sunset sky. Light and sand created intricate textures and I went low with my camera to capture it. 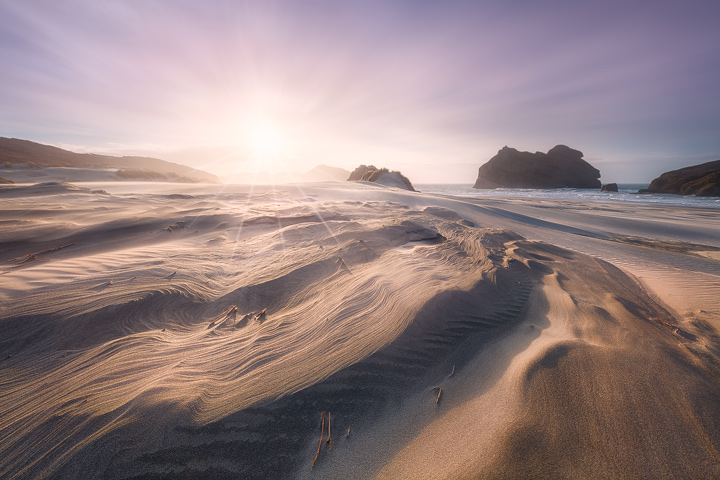 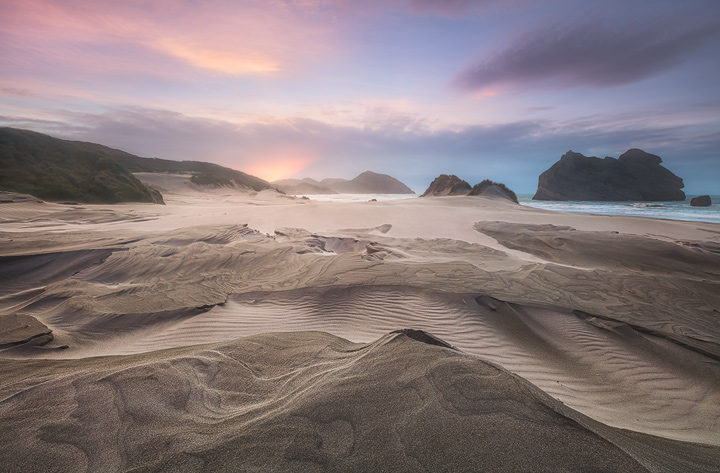 As I was already packing up my gear 10 minutes after the sun had vanished behind the cloud bank at the horizon suddenly the sky lit up again and I was able to capture the afterglow image above. I was very satisfied with what I got that evening. But also motivated enough to get up two hours before sunrise the next morning to see what dawn would bring me.

No glowing sky this time but a moody blue hour with the tide slowly creeping in. For this shoot I walked all the way to the western end of the beach, from where I had a great view towards the large sea arch. Right next to me was a deep sea cave, which I have to admit was a bit spooky in the predawn darkness. 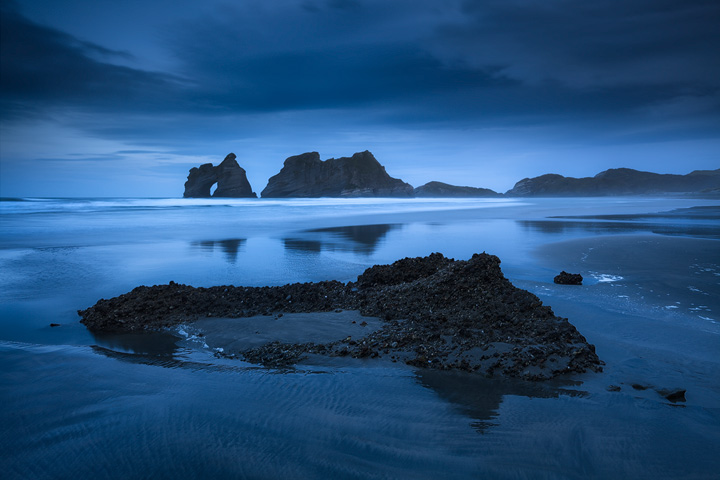 Besides photography there’s lot more you can do at this beach. It’s such a great place to explore. I already mentioned the sea cave and there are many of them. Some are completely tunneling the sea stacks and you can walk right through them. At the eastern end is a large tidal pool formed of rocks and corals. There you can watch little seals play in the waters during low tide. As if this wasn’t enough there are various walks, which will lead you into the beautiful backcountry. I can recommend the Green Hills walk with a little stop at Green Hill beach.

The two days up there went by much to fast. Next up was the long drive down to Punakaiki and the wet west coast of New Zealand.