Our four day Jeep tour through the Bolivian highlands was certainly one of the parts of our journey, to which I was looking forward the most. I had done extended research to find a good tour agency, wrote several emails and in the end decided to go with La Torre Tours from Tupiza. This was a good decision because for one thing we could include Tupiza in our travels and the tour itself was well organized.

We had also decided to get a private tour. Normally there can be up to six people in a Jeep. While this would have made the tour more affordable it would also have given us much less flexibility. When we left Tupiza it was only us in the Jeep together with our guide Nico and his wife, who would be cooking for us.

The best thing about this was that we could decide the pace and also customize parts of the route. This way we arrived at most locations without any other people around. Important for me was also to include a few sunset and sunrise shoots and while this led to very long days, it gave us some very unique experiences. 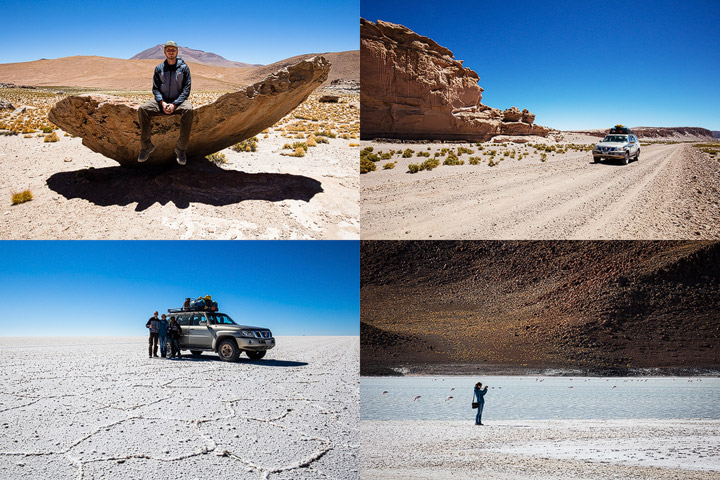 The first leg of our tour led us past the Sillar rock formations through the Bolivian highlands towards Uyuni. The landscape was vast, full of rolling hills, deserts, rocks and mountains. While the first part was still on dirt roads we later drove through dry river beds or across wide runways of sand and gravel. Occasionally we saw some wildlive, mostly Llamas or Alpacas. But most of the time the land was empty.

I was sometimes wondering how Nico knew where to go but even without GPS we arrived on the immense salt flats of Salar de Uyuni just in time for sunset. On the way there we had made a few photo stops, one of which was at Ciudad del Encanto. This place felt like a scene from the movie Pitch Black. Even around noon it was a bit spooky to explore the various caverns and viewpoints. 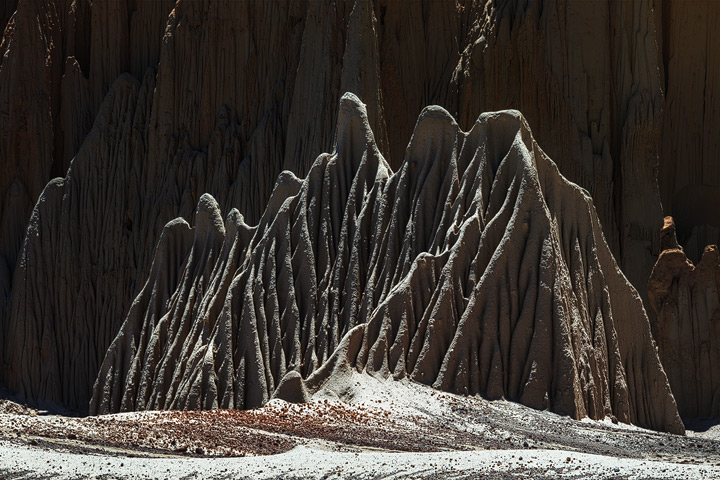 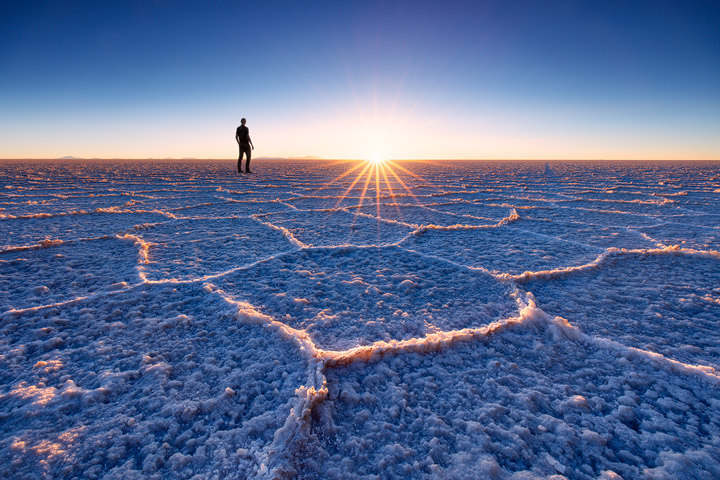 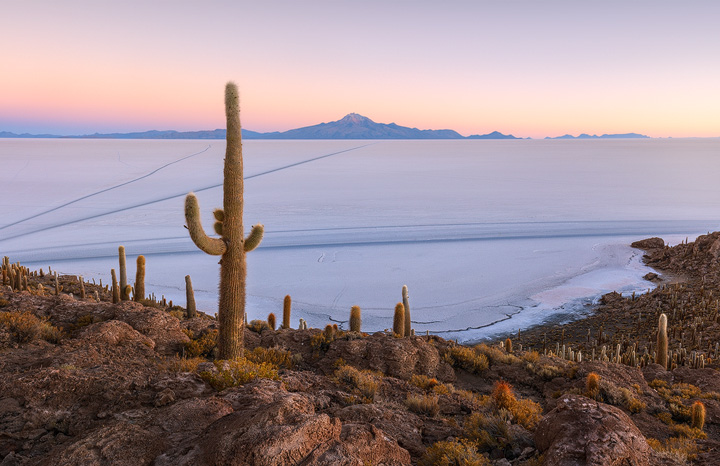 The second day of our tour started well before sunrise. We had slept in one of the salt hotels at the edge of the Salar and now made our way to the Incahuasi island in the middle of the salt desert. It was a wonderful place to watch the sunrise amidst a forest of huge cacti. It was also one of the few occasions where we weren’t alone during the tour. So close to Uyuni there were many other people out to enjoy the view.

Soon after sunrise we were on the road again, heading south towards the Lagunas Altiplanicas. The first lagoon we visited was Laguna Negra. What I liked about this place was the rock garden amidst which we made our pick-nick. I really would have loved to photograph there during sunset, but we still had a few more hours of driving ahead of us to get down to Laguna Colorada.

On the way there we stopped at more beautiful lagoons, crossed the Desierto Siloli and Desierto Dali until we finally reached a beautiful viewpoint near the red lagoon. The timing was perfect to photograph sunset. Just as the last light touched the tips of the distant mountains was the perfect moment for the photo. 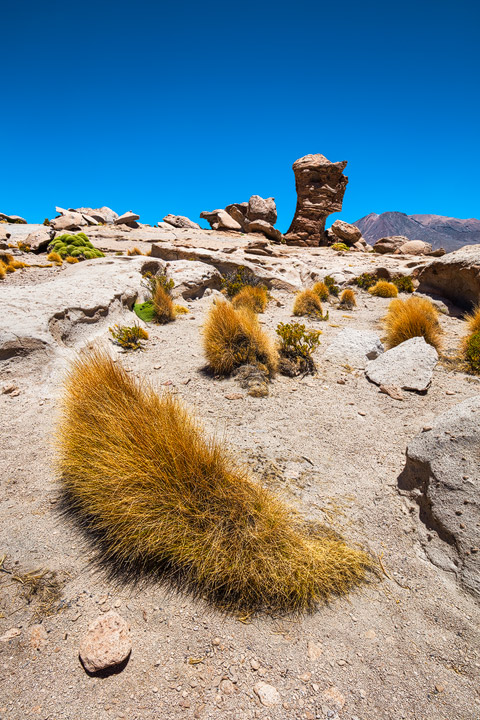 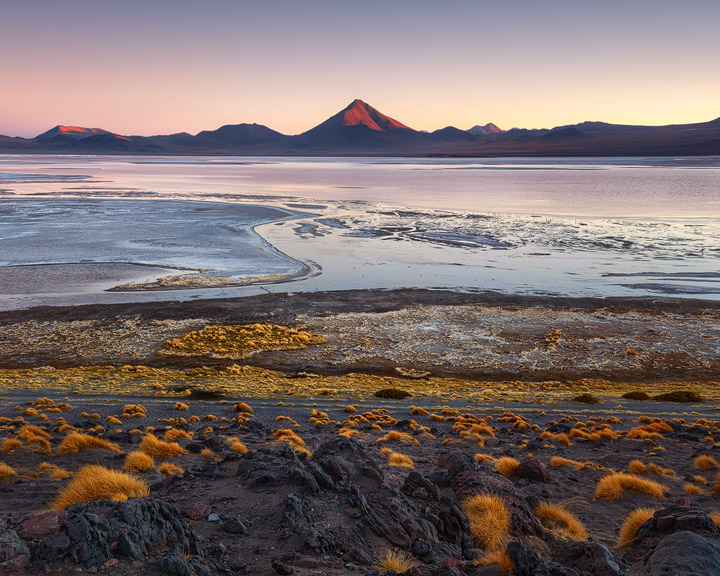 We spent the night in a hostel close to the lagoon. The next morning we went back once more to observe the flamingos. There were hundreds of them in the area and we spent more than one hour wandering the shores of the lagoon and taking photos. Again we were the only people around.

Then the final part of our journey began. A long drive through the highlands. This time we went up to around 5000 meters, drove past geysers and hot springs to finally arrived at Hito Cajon. This was my favourite location of the whole tour. There are numerous volcanoes and mountains close by, two huge lagoons and many spectacular views.

For the final sunset I hiked up the slope of one of the mountains in order to get a good view of Laguna Blanca and the mighty Licancabur. I was struggling a bit to find a good composition. There were so many rocks of various size and shape and I had to do a lot of previsualization to find a foreground that would look nice later with the deep standing sun. The contrasts between light and shadow would be critical for a good composition and would help to simplify the otherwhise cluttered scene. Once I found a good arrangement I sat down and waited.

The temperature dropped, the wind picked up and I was glad I brought enough layers of clothing. The moment the sun vanished behind the horizon was magical, even without clouds in the sky. After taking the photo I quickly packed up my gear and jogged back down to the car, where Nico and my girlfriend were waiting. 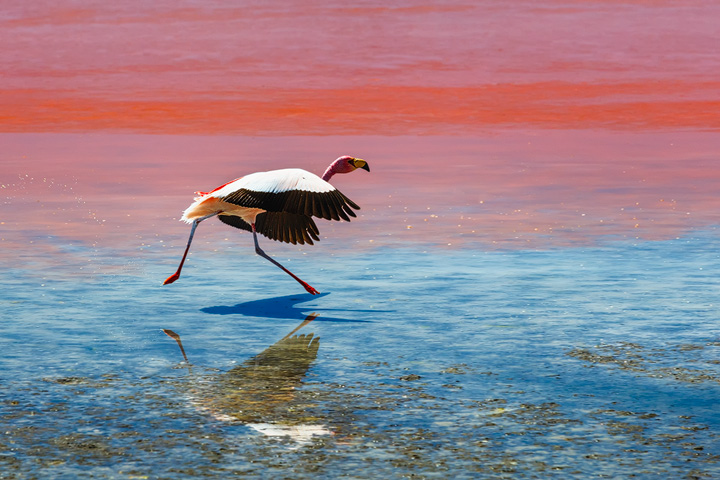 The next morning we left the dirt roads behind us. We said goodbye to Nico and his wife and via bus drove down to San Pedro de Atacama in Chile and to a long overdue shower.

I want to end this article with five tips for those of you who are also planning to visit Uyuni and the bolivian highlands: