When shooting starscapes a problem I have to deal with is high noise in the images. If I can’t go with exposures of several minutes because I want the stars to appear sharp in the image, I have to increase the ISO to achieve exposure times between 10 and 20 seconds. To reduce the resulting noise I can take multiple images and use a technique called noise averaging to get a clean image.

The image of San Pedro de Atacama below is the result of four photos I took for the stars, roughly an hour before sunrise, and one image I captured just before the sun appeared. I used noise averaging on the star images and later combined the result with the twilight scene to create this surreal photo. 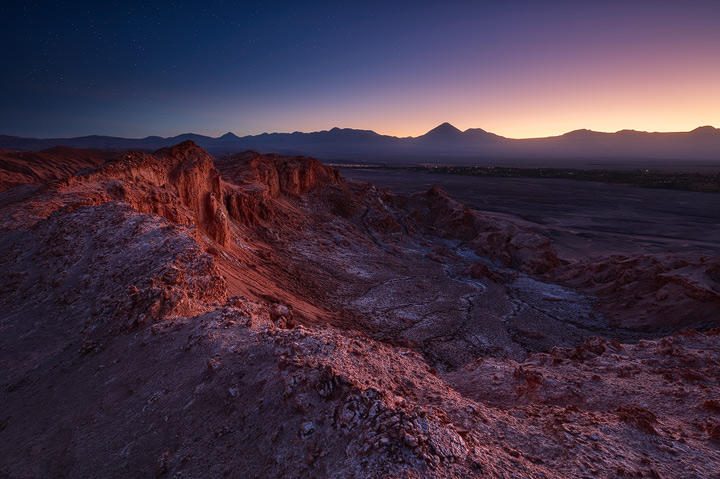 If you are wondering where the stars are in this photo, I have to admit that in the web sized photo they are nearly not visible. I primarily optimize my photos to look good in print, which is where the stars will look great in the photo. After resizing for web they are very small though. Just watch the video below till the end to see a larger version.

In the video you’ll learn exactly how I applied the averaging and how I did further tweaks to the night sky photo, which gave me an even cleaner image.

As you can see, using only four images gives me a much cleaner sky already. If necessary, I could average more images, which might be needed when using even higher ISO values. The only limit for PC users might be the 1GB problem of DeepSkyStacker and I have yet to test where that limit lies.

You’ll find the DeepSkyStacker here. And, if you want to learn my techniques to create a twilight star scene like in the photo of San Pedro, head over to my post processing recipes tutorial.