March 22, 2020 | Behind the Shot, Landscape Photography | by Michael Breitung

A few weeks ago I visited Mallorca for 10 days. Of those 10 days I stayed six days up in the North near the Formentor peninsula, and afterwards four days in the South near Ses Salines. During that time I went out to photograph sunrise and sunset nearly every day, while during the day I did a lot of hiking and scouting.

In the end all those efforts were rewarded with a few memorable mornings and evenings, on which I got quite epic conditions. In this article and the accompanying video I want to share some of those. 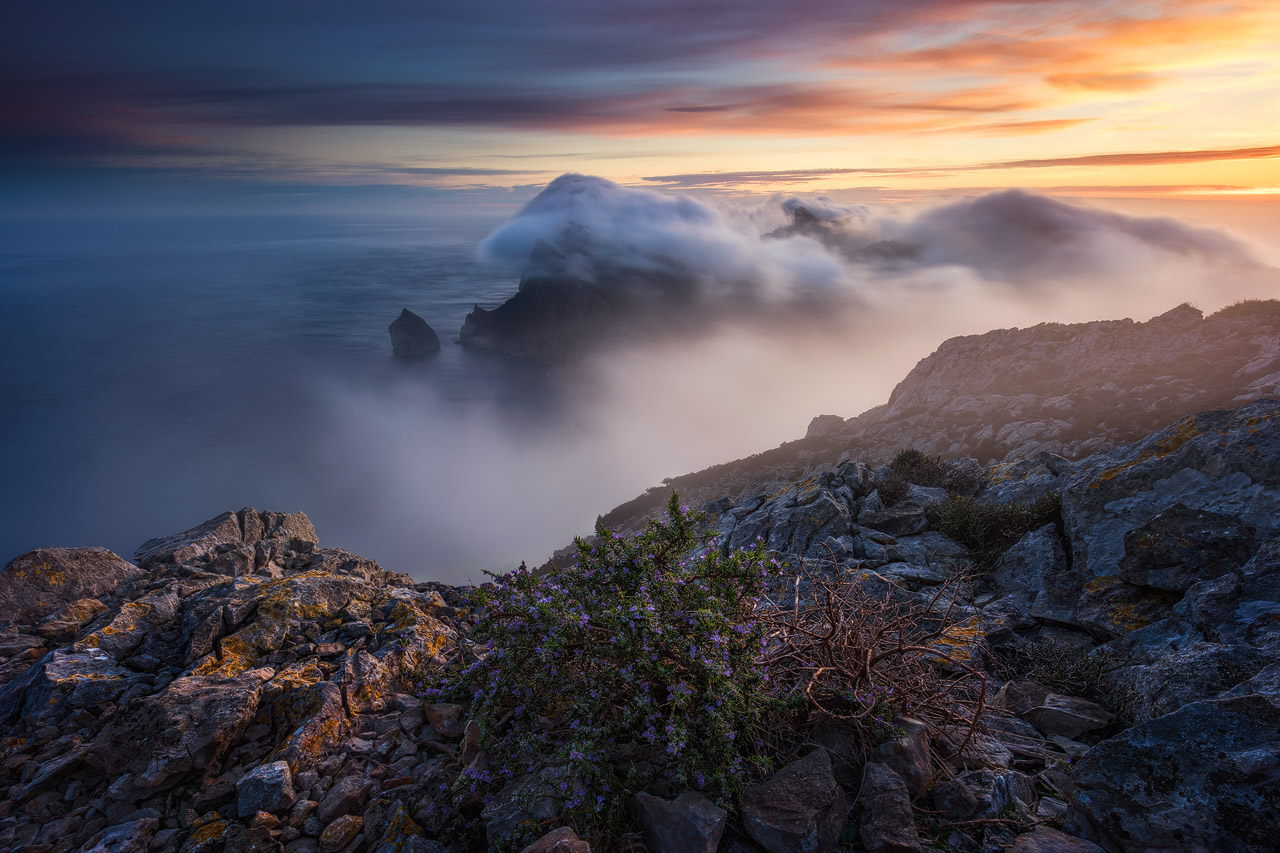 The first day on Mallorca I was greeted by very strong winds with gusts up to nearly 100kmh. This made it impossible to take photos the first evening and also scouting the area around the Albercutx Watchtower proofed to be nearly impossible. One of the stronger gusts nearly threw me off my feet as I was already on my way back to the car.

One tip here: I read a lot about the narrow road that winds up the Albercutx Watchtower and how demanding it is for the driver. In my opinion those descriptions make it seem much worse than it actually is. Up at the tower there is limited space and towards summer I'm sure the parking area will be crammed around sunset. But otherwise, driving up there is not very difficult and the road is completely paved.

The next day the wind started to subside and on my second morning on Mallorca, I finally set out to capture one of the iconic views towards Cap Formentor during sunrise. When I left my apartment 90 minutes before sunrise I already had a feeling that this morning could be special. There was a lot of moisture in the air and as I drove towards the viewpoint I repeatedly went through banks of fog. Up at the viewpoint I was first completely engulfed by clouds.

I used the time to find a good foreground with some rocks and a few bushes and then waited patiently for the light. As the clouds revealed the eastern sky I couldn't believe how lucky I was this morning. The beautiful colors in the sky alone would have already gotten me excited, but the clouds drifting across the peninsula beneath me made this morning even more magical. 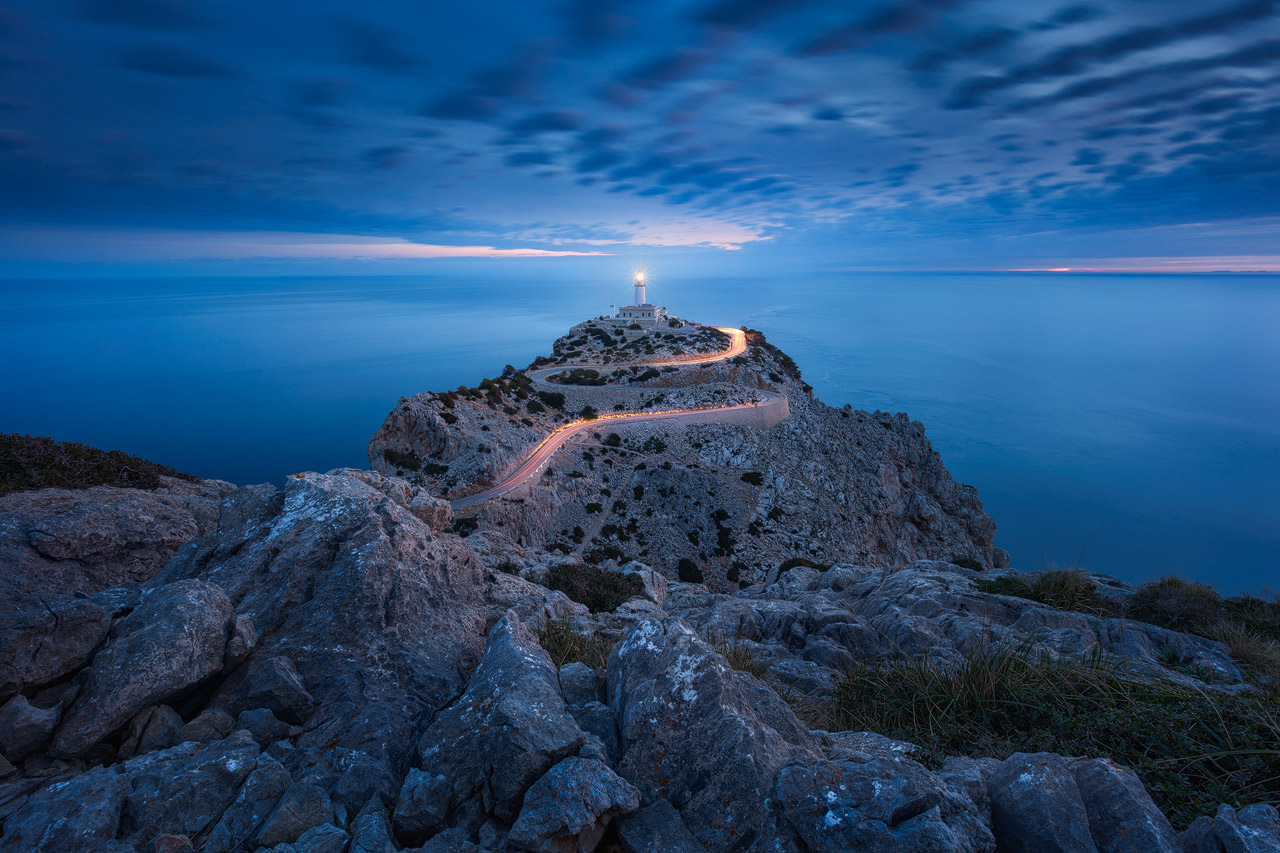 The lighthouse at the tip of the Formentor peninsula offers some fantastic photo opportunities. From the rocks in front of the lighthouse you can take photos towards the west around sunset with steep cliffs falling into the see.

But I was after a photo of the view towards the lighthouse during sunrise – maybe the most iconic photo you can take on Mallorca. Because this view has been photographed so often, I needed the right conditions to be able to take a photo that would stand out. And on the last morning I had up in the North I got just those.

The key for a good photo of the lighthouse is a good, balanced foreground, a sky that harmonizes with this foreground and some cars driving towards the lighthouse to create light trails. In the end I got all of that, but I was very lucky. I had done a very bad job at scouting. The days before I had just checked out where to park my car and where the trail up the little mountain facing the lighthouse started. As the sky slowly revealed beautiful cloud patterns I was still scrambling around on sharp Karst rocks to find a good foreground.

After one hour I found it, set up my camera and just as I was ready to take the first photo, two cars drove towards the lighthouse as I needed. 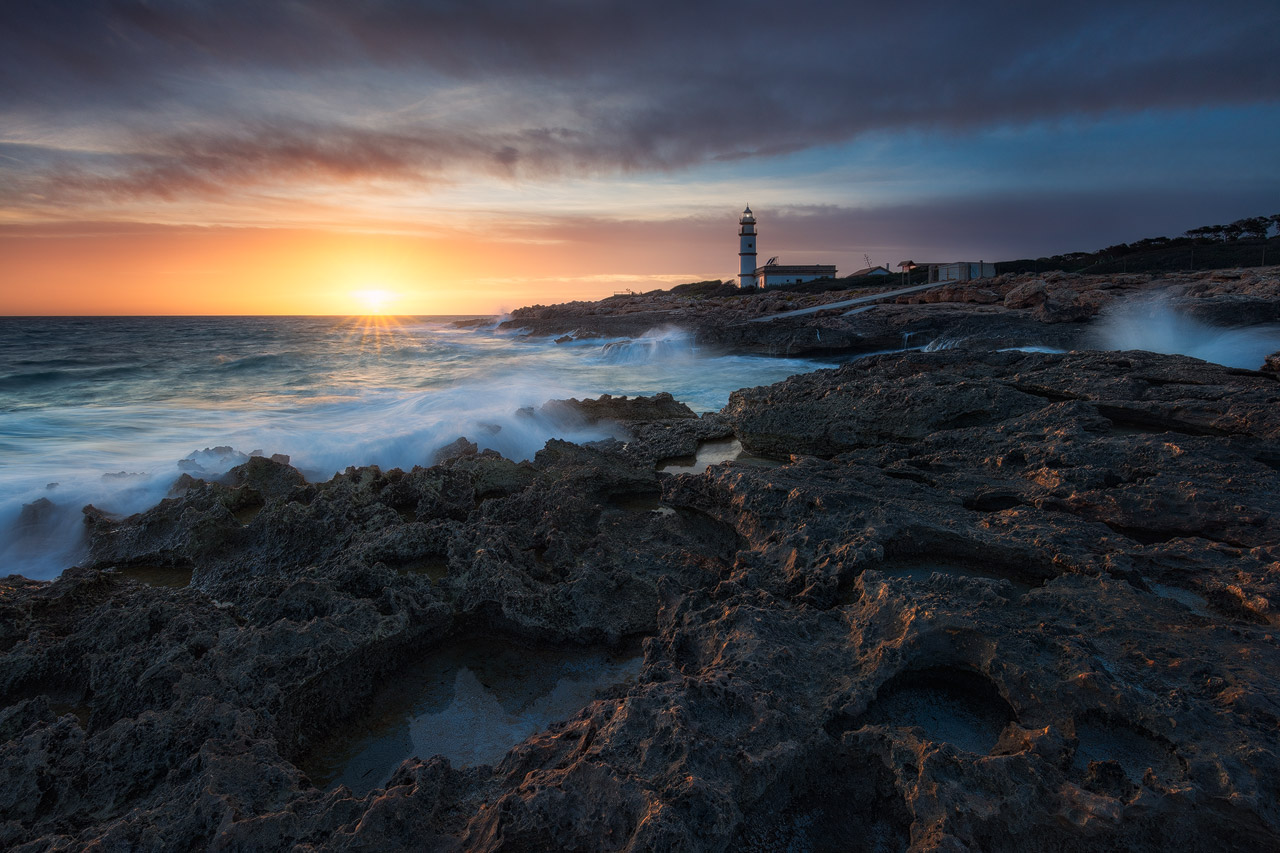 The third photo I want to show you was taken in the South of Mallorca near Ses Salines. Prior to the trip I had seen a few photos of this lighthouse, but nothing really epic. With four days in the area I decided to dedicate my time towards capturing a photo that would show the essence of this rough stretch of coastline. And for this it was important to get a dramatic sky and a turbulent sea, because only those would harmonize with the jagged rocks along the coast.

It took me three attempts until all fell into place the way I wanted. A glowing sky filled with dark clouds, waves crashing on the shore and the lighthouse overlooking the scenery like a sentinel.

In addition to the photos I also recorded a behind the scenes video, which contains two more photos I captured during the trip to Mallorca as well as some seascape photography tips.