Maybe the most strenuous part of our journey till now were the three days of travel from Puerto Maldonado in Peru to La Paz in Bolivia. Since there were no direct flights from Puerto Maldonado or Cusco to La Paz, and the options with a stop in Lima were just too expensive, we had decided to cross the border by bus.

Looking back now, this might not have been the best decision. But it was an experience nevertheless.

We completed three long bus rides of around 10 hours in three consecutive days. First we took the night bus to Cusco, where we had a layover so we weren’t dependent on the punctuality of the buses. Then we went to Puno for another layover and finally the toughest part to La Paz.

We had booked the bus from Puno to La Paz, which crosses the border at Desaguardero. This I had read would be the fastest option. But as I went to the counter the next morning to get the tickets I was told that our Bus would go to Copacabana where we had to change buses and then continue to La Paz.

This annoyed me because it meant more stress and there was always the chance they had screwed up our reservation and the bus in Copacabana would be gone or full. In my best Spanish I tried to get us onto the bus to Desaguardero instead, but all seats were taken.

So we started the ride, which took about four hours until we reached the border just a few kilometers south of Copacabana. The process at the border was a bit chaotic. First we got off the bus to change money, which we needed to pay the entry fee at the border. When everybody was back in the bus we drove for another few hundred meters before getting off again. This time we first walked to the immigration office on the Peruvian side to get our emigration stamps. Then we crossed the border by foot and headed to the immigration office on the Bolivian side to get our immigration stamps. The bus went through customs in the meantime.

The whole process took around 90 minutes until all passengers were back in the bus again and we continued our drive for another 20 minutes to reach Copacabana. There we were dropped in the center with rough instructions about where and how to get our bus to La Paz.

One hour later and we were on the road again. After a ferry crossing and a long drive which lasted until sunset we finally reached La Paz. The last miles of the ride we went through the outskirts of La Paz and I have to admit that I seldom felt as uncomfortable as back then. The bus had to constantly change direction because of countless construction sites. The dirt roads led us between endless walls and countless unfinished buildings. All looked a bit like in a post apocalyptic movie.

Finally we were dropped in the center of La Paz and took a taxi to our hotel. Now our La Paz adventure could begin. 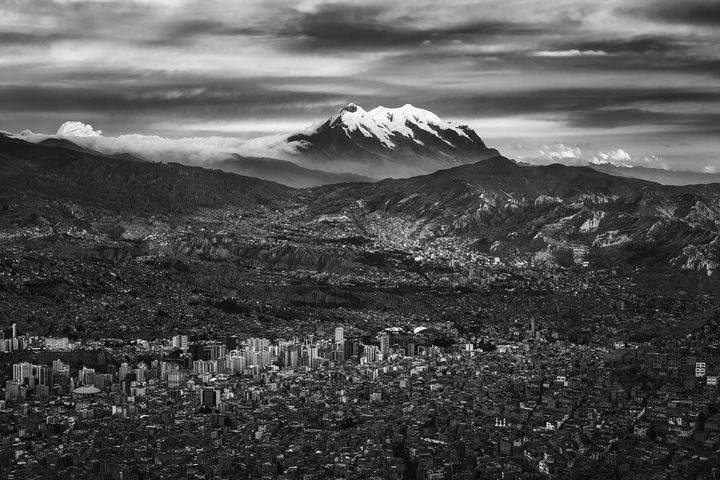 La Paz lies in a spectacular location, surrounded by the mountains of the Cordillera Real. Besides exploring the city itself there are many options for day tours. But thanks to the climatized buses of the last days I had caught a cold and together with the elevation of the city I was exhausted for the first two days. This meant no hikes in the mountains.

We did some exploring though and besides walking all over the city we visited the close by Moon Valley, which for me was a disappointment. It’s some interesting rock formations close to La Paz but it’s also surrounded by buildings and you don’t get a view there, which lets you forget that there are millions of people living just a few miles away.

We also went to El Alto on one of the cable cars, the so called Teleféricos. There are several routes possible within the city and it’s the fastest way to get to El Alto. It’s really worth a ride because of the fantastic views. The red line I knew would exit close to a wonderful viewpoint so we went in the evening, hoping to photograph sunset.

But even though on the map the viewpoint looked close we would have had to walk several 100 meters through El Alto, then accross a bridge and another several 100 meters next to the main road leading down to La Paz. Normally I would not have minded about those circumstances, but it didn’t feel totally safe to do it after dark.

I didn’t give up though and organized a taxi for the next day with a driver who would wait for us the whole time I would be taking photos. It wasn’t the cheapest option but it was worth the money because I could focus on my photography and didn’t have to worry about our way back to the hotel.

The view was spectacular with Illimani throwning in the distance, caressed by clouds. I stood there waiting for at least 90 minutes taking various photos, but the shot I was after didn’t reveal itself until 20 minutes after sunset when the lights in the city were finally bright enough. 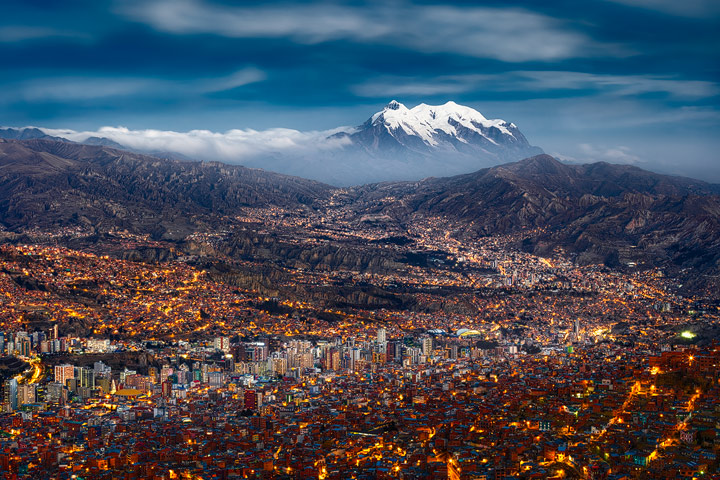 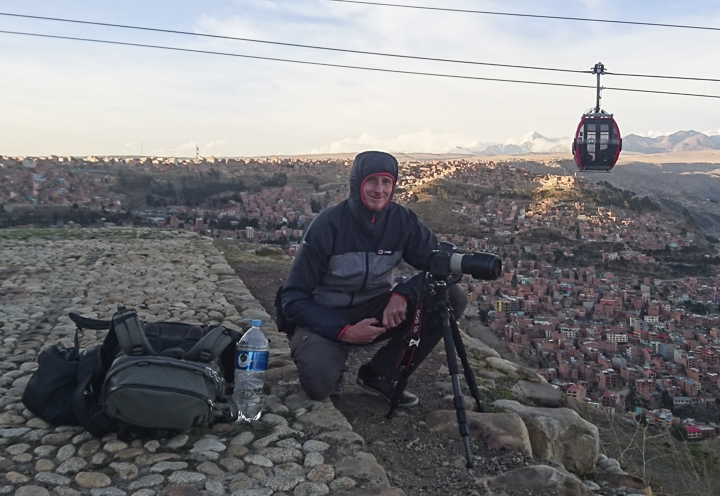 At 4000 meters elevation it quickly got cold in the evening

Besides that I only took some photos with my self-phone in the streets of La Paz because most of the time I didn’t bring the large camera. It was just a feeling but I didn’t think it would have been a good idea to carry all my equipment around too much. We had a great hotel in a safe area and although I usually don’t like to leave my stuff, in South America the hotel often seemed to be the safer place for my equipment, especially at night.

As I was feeling better after a few days we wanted to do at least one trip into the surrounding mountains and the easiest option was to Chacaltaya. 10 years ago there were still parts of a glacier up there. But although it lies at more than 5000 meters it doesn’t see much snow these days anymore. What’s left up there are the remnants of some buildings and lots of raw rocks. Looking at this it’s hard to believe that people were skiing up there in the past.

The tour didn’t involve much hiking, just a climb of maybe 200 meters up to the top of Chacaltaya. No view greeted us up there and it felt a bit like our tour to Rainbow Moutain near Cusco as all was clouded in. On a sunny day this would have been a spectacular vista but somehow we weren’t very lucky with those mountain tours. 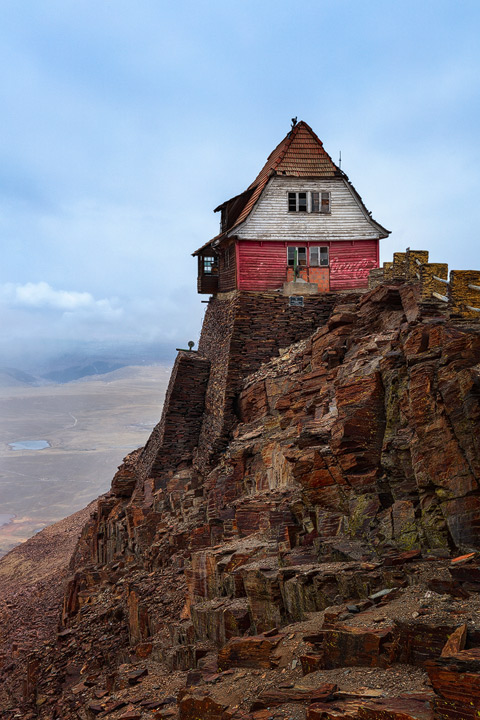 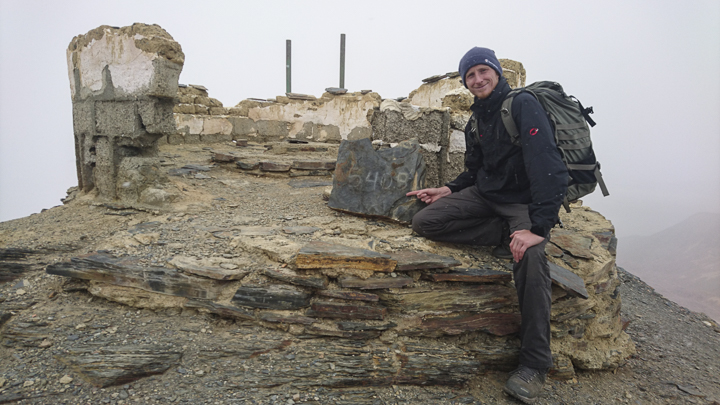 The highest point of our travels around the world, the Chacaltaya ski resort or what’s left of it

As you can see I didn’t take many photos the first days in Bolivia. All those bus rides of the previous weeks, the countless discussions with taxi drivers, tour operators and officials were beginning to wear me down.

Also photography wasn’t as easy as during other travels I did in the past. In western countries I seldom have to worry when I go out for sunrise or sunset. But in South America I always took precautions and, if it felt unsafe, I rather skipped the photo opportunity. This was frustrating but with four more months of travel ahead it wasn’t worth the risk.

Then, if I ventured out, the weather often wasn’t right or the magic light just wouldn’t come. I was beginning to question myself and if I was doing enough. After all I had been traveling for two months and should have had at least a few big shots in my portfolio.

Looking back at it now I think this was a very unhealthy train of thought. When you start to feel like having to take spectacular photos this can quickly take away the joy of photography and traveling. At least this is how it felt for me after having entered kind of a dry spell with my photography the last few weeks in Peru.

It should be the other way around, being grateful to travel and to visit spectacular locations and, if the light is right, the photos are the bonus. During my travels around the world, realizing this was a constant struggle, but I will continue to work on this mindset.

And the big shots were still waiting for me the following months of travel. In the next article I’ll take you along our travels to Tupiza, which we nearly had to cancel because of a strike of the public transportation sector in La Paz.