After spending two fantastic days on the Crozon Peninsula with its rough coastline it was time for some change of scenery again. Our next stop was in the Côtes-d'Amor department of Brittany. Up in Ploumanach we had planned to spend another two days to allow us some time to explore and photograph the Côte de Granite Rose around Trégastel and Ploumanach.

One of the main attractions along that stretch of coastline has to be the famous lighthouse of Ploumanach – the Phare de Men Ruz. I would suspect that nearly every photographer who visits Brittany also pays this lighthouse a visit. You'll find thousands of photos of it online. So the pressure was on, because I didn't just want to take yet another photo of the Phare de Mean Ruz. I wanted to take a photo that could stand out.

And as I've written in previous articles, to achieve this, above all, I needed some special light and weather conditions.

As we arrived around noon it looked promising. The sun was out and we enjoyed a wonderful walk along the path that stretches along the coast of Ploumanach. It's a very photogenic coastline with huge granite rocks lining the shore, some of them 10 or more meters high. And then there is the beautiful Phare de Men Ruz, which is built from the same stones. It sits majestically at the tip of the peninsula, overlooking the channel that leads to the Ploumanach harbour.

I could easily spend a week or more just exploring and photographing this part of Brittany. Aside from the popular viewpoints there are endless photo opportunities. But with the limited time I had, I focused my efforts on the most popular sight, the lighthouse.

At first it didn't look like I would be successful with capturing something special on the first evening. In the photos below you can already see a bank of deep coastal clouds approaching in the distance. An hour or two later the sun was snuffed out by it and with it the vibrant colors of the rocks. A bland, grey sky wasn't my desired canvas for sunset. 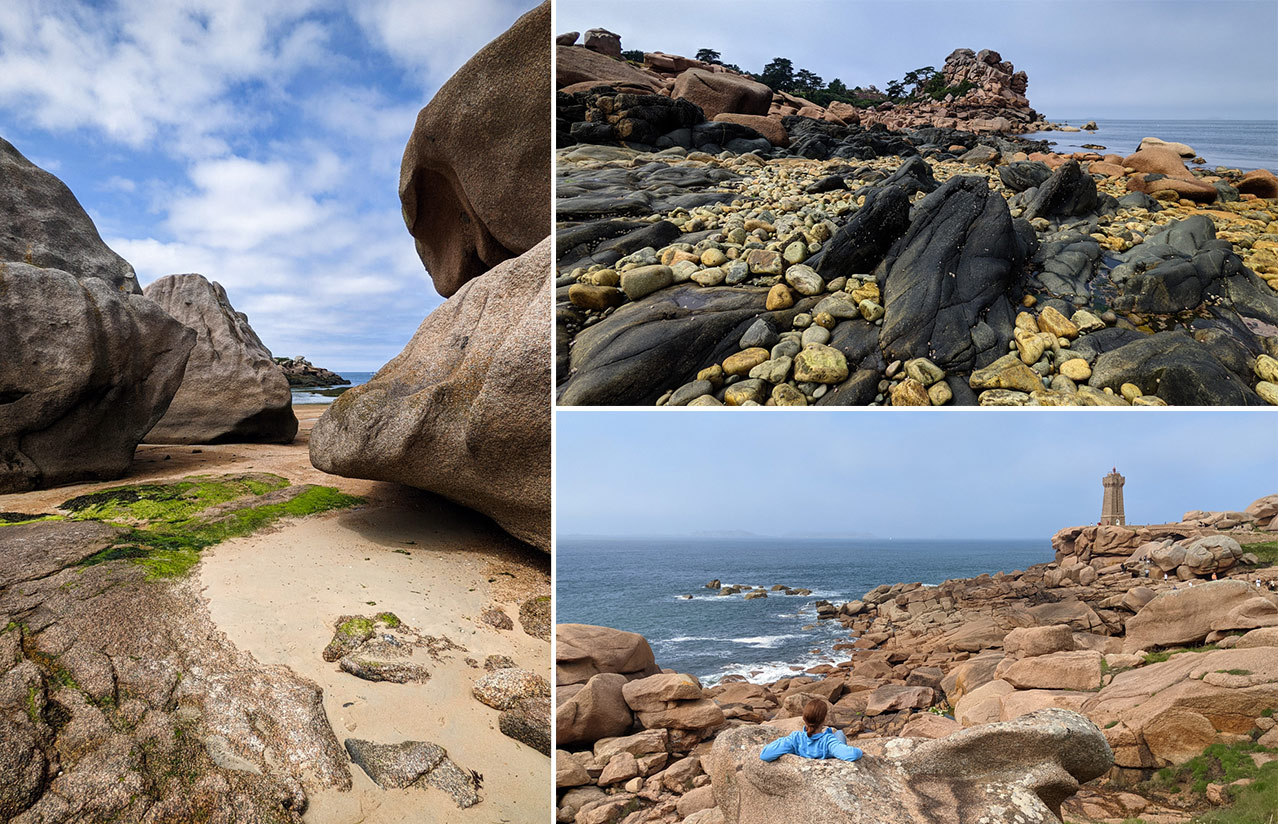 I spent the remainder of the day anxiously checking the weather forecast. The weather radar showed that the clouds were moving very slow and I already feared that they might also stick around the next day. But I went to the lighthouse for sunset anyways. There's no merit in sitting in a campervan for sunset, just because the forecast tells you so. As a landscape photographer I have to be out there trying. There are certainly many failures and disappointments along the way. But occasionally the elements align and all falls into place.

The first evening in Ploumanach was such an occasion. As I walked to the lighthouse I could already see a bright band of light at the horizon in the West and I knew that once the sun got low enough in the sky, this would provide me with that special light I was talking about in the beginning.

Now an important skill to learn as a landscape photographer in such situations is to stay calm. When the sky begins to glow there's always the temptation to start chasing around, trying to capture as many photos as possible. This is what I did back in Auvergne, and it almost ruined the photo shoot.

Focusing my energy on just a few or even just one photo usually pays off much more. So this is what I did in Ploumanach. I looked for a composition that was different to the photos I had seen online and made sure the lighthouse would be the focus of the photo. With the wind picking up and the tide rushing in I went close to the water's edge to capture the beautiful wave action in the foreground. 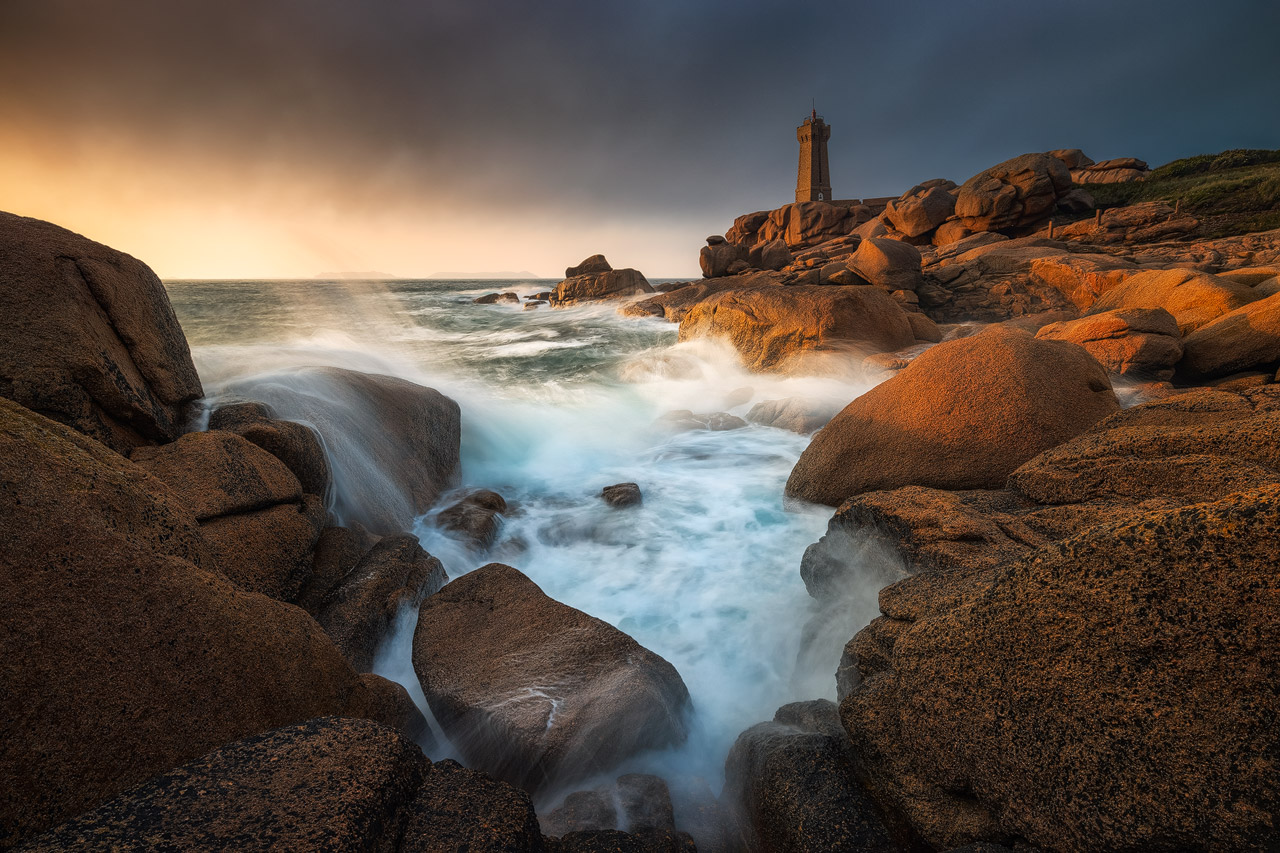 After this glorious evening the pressure had lifted. Photos like this one have become kind of a redemption for me during my photo travels. Even had I not captured any good photo until this evening, such a single photo can tip the scales for me. When I started with photography my goal was always to come home with many good photos from a trip. Now my goal is to come home with a few or even just one photo I consider great. You could call this a form of essentialism*.

After I had finished my first photoshoot at the Pink Granite Coast I had a look around for additional compositions that would showcase the majesty of the Phare de Men Ruz. And I found one to which I returned the next evening. This time the conditions were different with high clouds lining up behind the lighthouse. Another perfect display of light ensued. 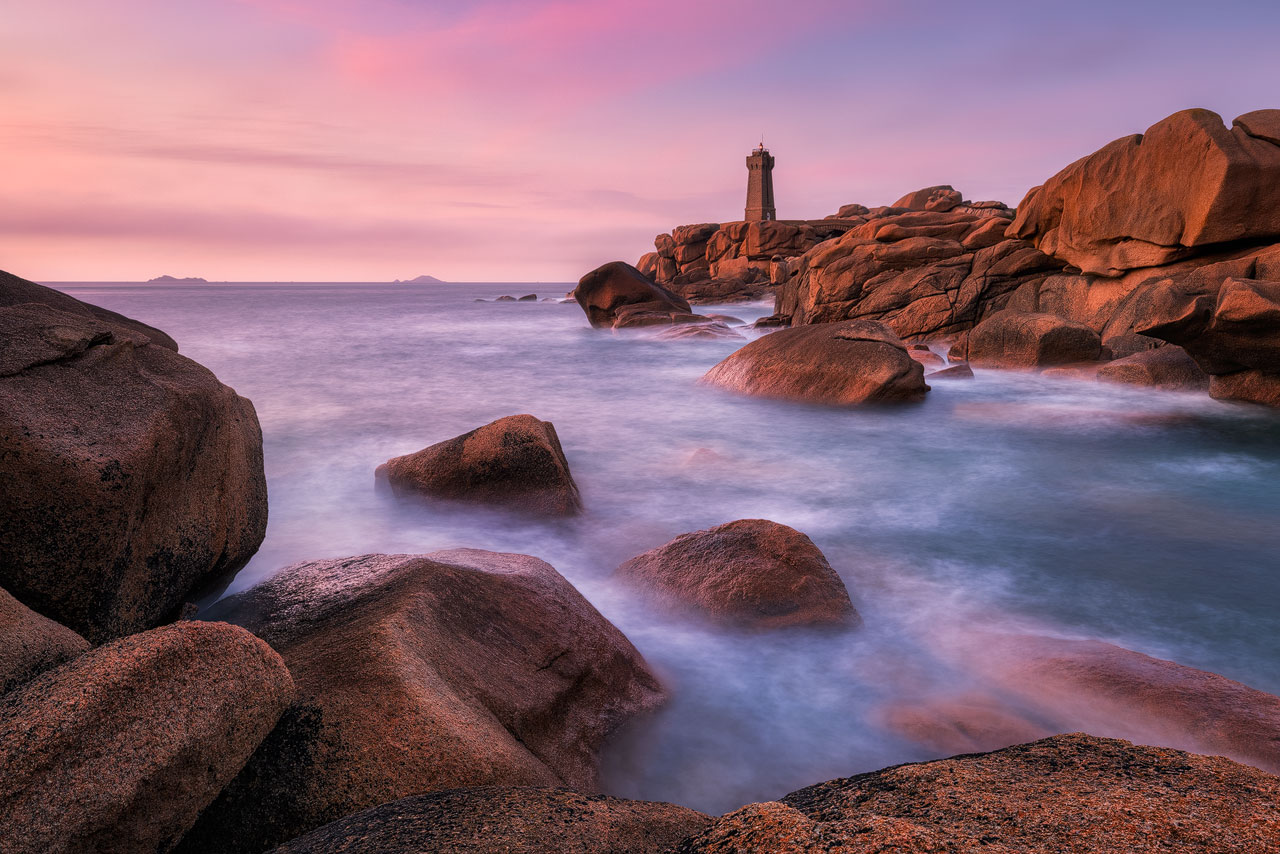 As I already mentioned above there is more to Ploumanach than its lighthouse and I hope to return someday and extend my portfolio from the Côtes de Granite Rose. But in the two days I spent there I focused on just one other view. A kilometer west of the lighthouse is a very photogenic mound of granite rocks, decorated with some beautiful trees.

There are several interesting structures in the dark rocks just south of it and I got up an hour before sunrise twice to try to photograph it. When photographing the coast of Brittany it is essential to know the tides. Some scenes work best during high tide, others like this one require low tide to reveal their beauty. I use the app Nautide to plan such photo shoots in accordance with the tides and in Ploumanach it worked out perfectly. 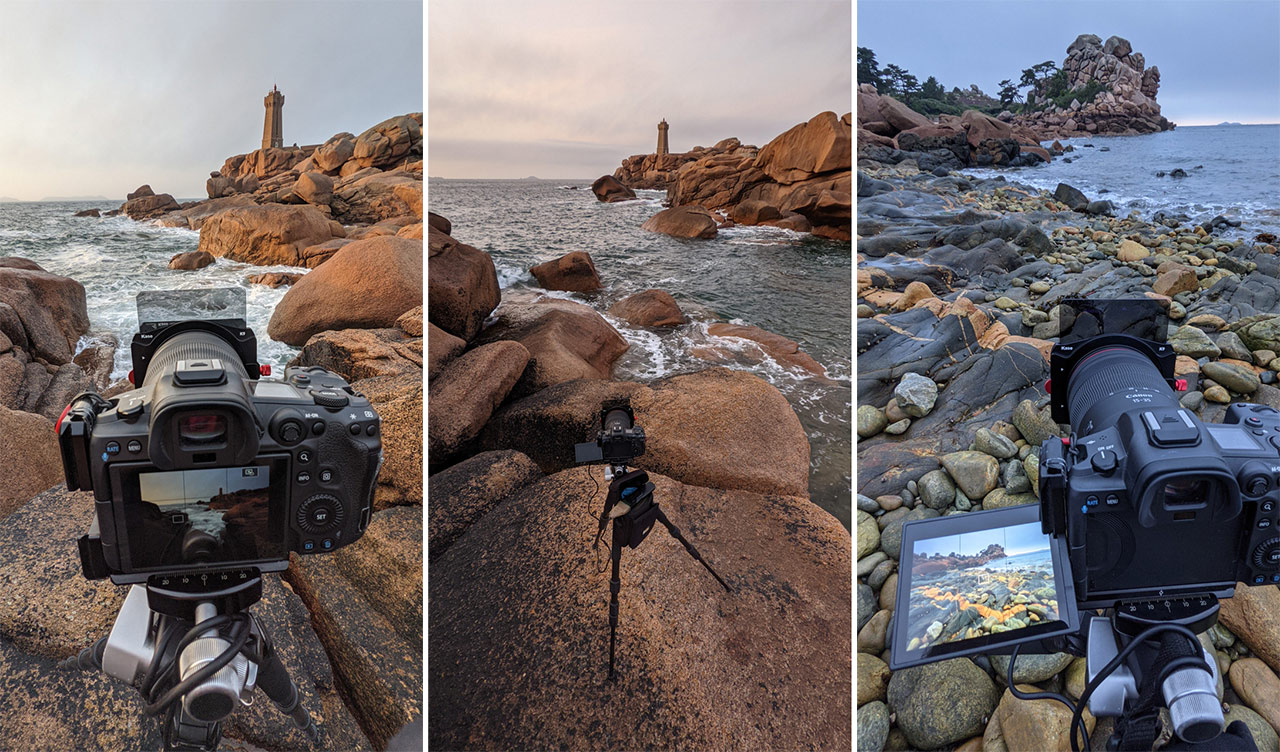 The only thing that didn't work out was getting the right light for sunrise. But I guess this would have been asking too much after I already got lucky for sunset. In the photo below you see a typical phenomenon. There was a bright stripe of light at the horizon teasing me. But it stoped just a mile or so short of where the sun would appear in the East. As a result, instead of a glowing, colorful sky, I only got a grey sky with a hint of blue from blue hour.

To still make this photo work I focused fully on foreground interest and color contrast. The orange rocks in the foreground complement the blue sky nicely and you can imagine that with the help of Photoshop I emphasized this color contrast a bit. 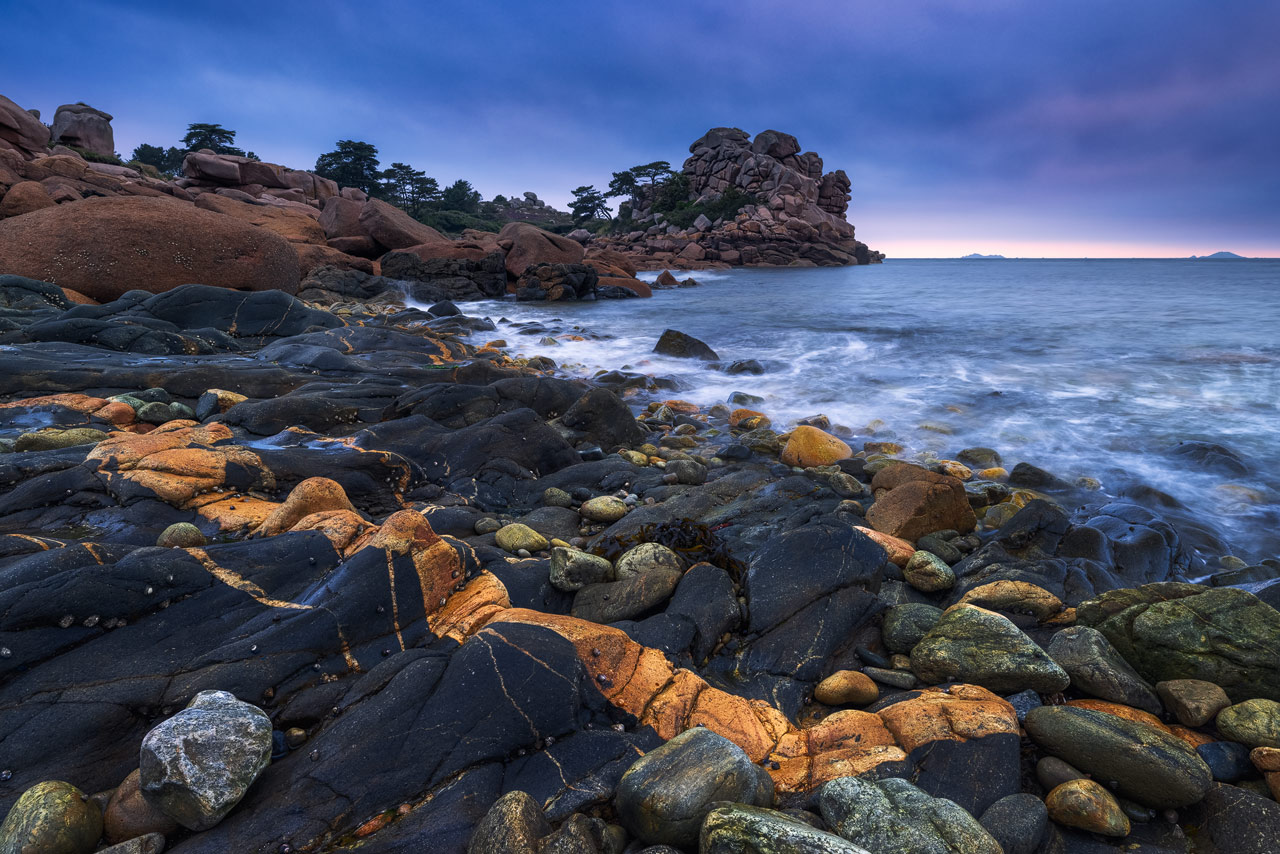 This concludes my little write up about photographing Ploumanach. If you are also interested to see this coast in moving pictures, then take a few more minutes and watch the behind the scenes video I captured. Besides Ploumanach it also features Cap Fréhel and Mont Saint-Michel, which I'll cover in the next articles.